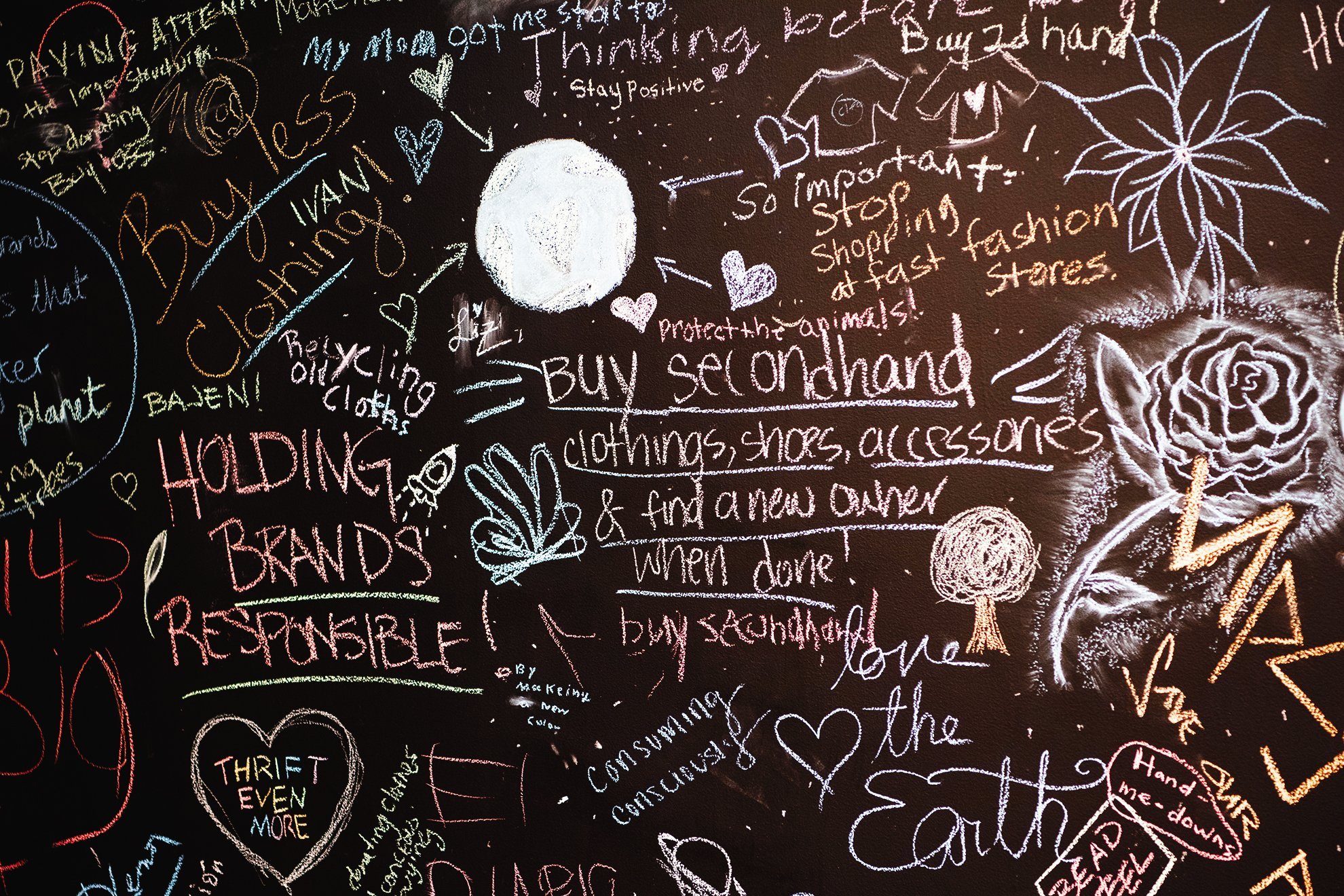 As we walk into 2020, the rise of online shopping and fast fashion retail has me worried. Yet, despite some of this darkness, there is still so much light and opportunity to remake our world into one that matches our values. To move forward, I believe it is essential to also look back.

1. The Swell of Online Retail

While brick and mortar stores saw some softening of sales, online retail continues to boom. Cyber Monday sales exceeded $9 billion this year. Retail giant Amazon generated roughly $35 billion in apparel and footwear sales in 2018. On Cyber Monday the Amazon site included low-priced deals with a clock ticking down the minutes to finalize a purchase. This sales tactic gave no time to slow down, making it hard for shoppers to make thoughtful decisions.

While we worked hard this year to inspire people to buy less and better, online retailers with Amazon leading the way pushed for a rise in one-click, delivered tomorrow, disposable fashion. Online retail makes transparency and accountability even harder. As we saw with the Wall Street Journal reporting that Amazon continued to sell product from blacklisted, unsafe factories in Bangladesh that are shunned by other retailers. A reminder that the doorbuster deals on sweaters, holiday dresses, and shoes come with a very real human cost.

Forever 21 filing for bankruptcy may have been a symbolic victory for our conscious fashion Movement but faster fashion retailers have thrived during this same time period. Digital fast fashion giants like Fashion Nova, Boohoo, and Missguided have ushered in a new order of cheap retail. Unfortunately, fast fashion isn’t dead, it has simply relocated online. Worse yet, sales figures are skyrocketing. Boohoo Group PLC posted a revenue of more than $1 billion. Fashion Nova reigned in influence, being reported as the most googled fashion brand of 2018. The site’s 2017 revenues topped more than $400 million.

These multi-billion dollar fast fashion brands remain evasive about the natural resources that they gobble up, the human rights abuses and modern day slavery embedded in their supply chains, and the staggering amount of waste they generate.

Marie Kondo’s method of KonMari has led to many consumers questioning their buying habits and downsizing their possessions, but the movement has also contributed to a second-hand surplus. Because of the glut of donations, thrift stores inundated with too many items have been forced to turn away bags of clothes. FoxBusiness, reporting on the “Kondo Effect,” encouraged consumers to “throw the junk to the curb”. Indeed, while donating bags of torn and tattered clothes may make us feel good, what most shoppers don’t realize is the great myth that these clothes make it to the second hand market. Most inevitably end up in landfills.

1. Activism Is Back, with Women Leading the Way

This past year has ushered in a global shift in consciousness and people taking to the streets to demand action.

We saw as fearless 16-year-old, Greta Thunberg, called out world leaders for their climate inaction (#howdareyou) and become Time Magazine’s 2019’s Person of the Year.  While Trump dismissed her as an angry teen and Jair Bolsonaro labeled her a “pirralha”, Greta inspired millions, noting during her Cop25 speech, “Well I am telling you there is hope. I have seen it. But it does not come from governments or corporations. It comes from the people.” Indeed we at Remake have always believed the fashion industry and policy makers will not fix our industry — it is us, everyday people, that need to rise up and demand a more fair and just industry that puts people and our planet first.

The 80-year-old Jane Fonda, a lifelong activist, announced that her red coat would be her last clothing purchase she ever makes. Her peaceful climate protests have led to her being arrested five times in October, and Fonda’s red coat is now an iconic symbol of rebellion.

From Extinction Rebellion, to Remake’s own 150,000 strong and fast growing conscious fashion community, the people have spoken — and consciousness is here to stay.

Generation Z—those labeled with the finality of the alphabet—are the A-listers of consciousness and the future caretakers of our planet. According to the “2017 Cone Gen Z CSR Study: How to Speak Z”, 89% of Gen Z would rather buy from a company supporting social and environmental issues over one that does not. The study also reported that 65% of Gen Z pays attention to companies’ Corporate Social Responsibility efforts when shopping.

According to WGSN’s report, “The Gen Z equation,” Gen Z cares more about hyper customization and individuality than trends. Fast fashion caters to the masses with predetermined trends and global uniformity, and it is a far cry from the individual style that Gen Z wants. Here’s to hoping that Gen Z’s individual style over trend ethos will help erode fast fashion’s hold on the market.

The awareness of hyperconsumerism has crossed generational lines as all ages are realizing the negative effects of wasteful buying habits. Zero waste lifestyle vlogs are now commonplace on YouTube, and hundreds of web forums exist supporting the practice of reducing consumption and lowering the levels of garbage we throw away. This summer, Remake’s own community committed to a 90 day pledge of #nonewclothes.

Circularity is becoming more than just a buzzword, from inroads in sustainable materials and the minimalist lifestyle and capsule wardrobes gaining in popularity to innovative approaches like Amber Cycle and Renewal Workshop puzzling through ways to reduce the staggering amounts of clothes we currently send to landfills.

Change is here, and it is here to stay. I see it every day in the conversations I have with change-makers all over the country. I also see it in Remake’s growth, from a team of three to a 150,000 community. In just one year of launching our Ambassador program, we now have 235 women leaders engaging their community on women’s rights and climate justice through the lens of fashion. We have pledged to embrace a sustainable fashion lifestyle, to buy less and better, and to keep clothes in circulation longer. We are here to demand transparency from the fashion industry on wages, action on climate, and waste. As we walk into 2020, won’t you join us?

Be a part of the change.