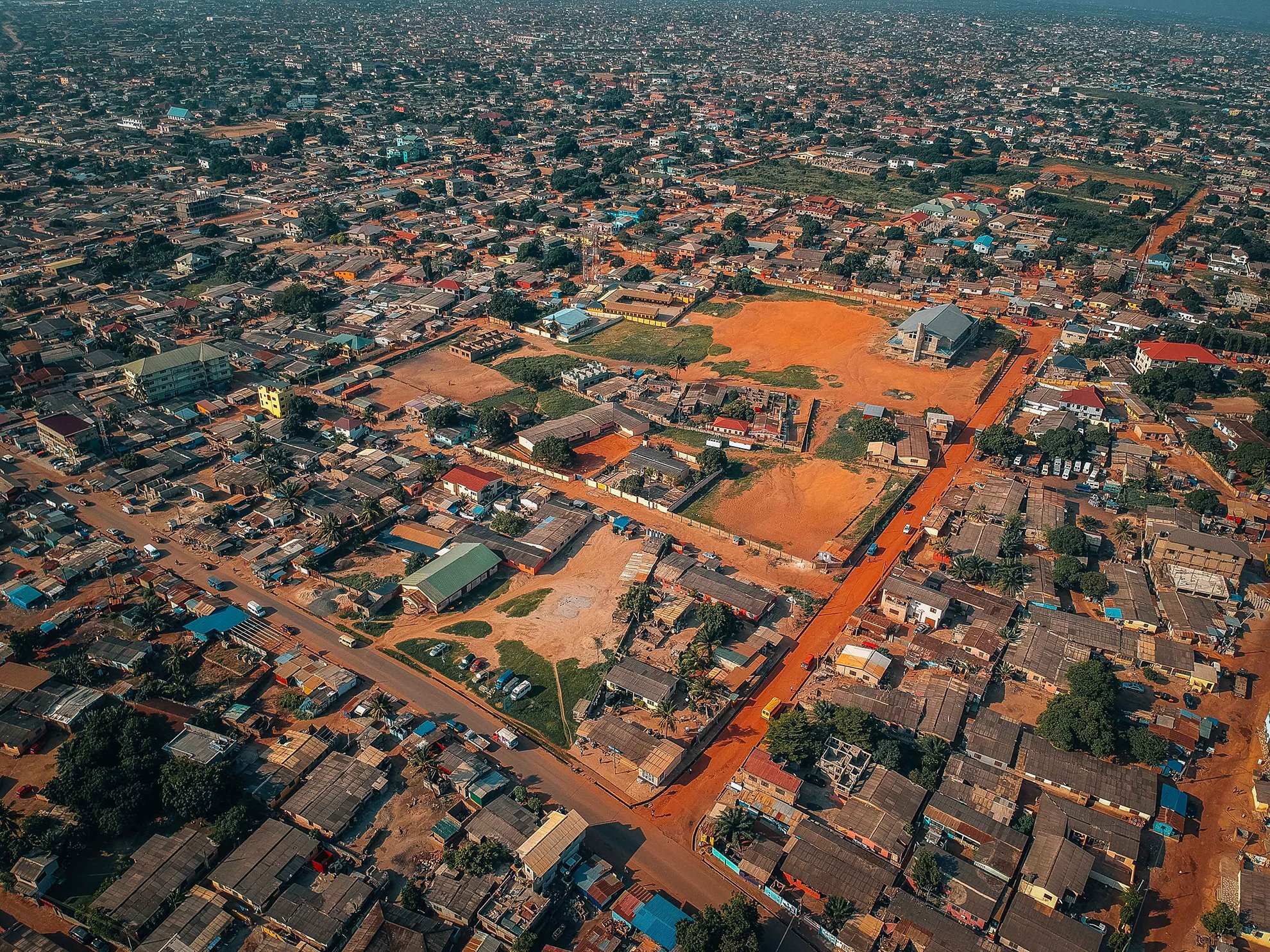 The Global North has a waste problem, and it is disproportionately harming underprivileged communities of color.

The volume of clothing Americans throw away annually has doubled since 2000. The US alone generates an average of 25 billion pounds of textiles per year, resulting in about 82 pounds of waste per US resident, according to the Council for Textile Recycling. Not only has fast fashion made it easier for us to acquire new clothing, it has also made it easier for us to discard items that we deem as unwearable or no longer bringing us joy.

As a conscious-minded consumer, you might consider donating your unwanted items to charity. But before you take a trip down to the nearest donation bin, consider this: Almost half of unsold items are shipped offshore to regions like Accra, Ghana, with one of the largest secondhand clothing markets in the world.

By passing off unwanted clothing as commodities, countries in the Global North are offloading their responsibilities to the Global South. However, the excess waste is overwhelming the receiving countries. Currently, the US is the top exporter of second-hand garments globally, followed by the UK and Germany.

By using other communities as a dumping ground, dominant nations are perpetuating waste colonization and continuing to exploit low-income and vulnerable communities.

A LEGACY OF WASTE COLONIALISM

Textile waste export is tied to historical colonizing practices, where high-income nations exercise their privilege and power to attain their goals while undermining the rights of low-income communities to a clean and safe living condition.

Coined in 1989, the term “waste colonialism” describes the domination of one group in their homeland by another group through waste and pollution. This came to light amid concerns expressed by African nations regarding the disposal of hazardous waste from the Global North leading to destructive impacts on their communities. The toxic materials not only contaminate food sources and disrupts the ecosystem, but they also sever the cultural, spiritual, and physical relationships the people have with the Indigenous lands.

The transportation of waste is part of the massive global waste trade, which was positioned as a way for developing countries to stimulate their economy and generate income through accepting pollutants. The global waste trade has now grown into a $2 trillion USD market and is projected to reach $2.3 trillion USD in 2027. Unfortunately, this comes at the expense of the environment and the people living and working in proximity to the dumping sites.

Since the 1980s, Africa was the top choice for dumping of European wastes, from chemicals and plastics to electronics and eventually second-hand textile. As pollution reaches new heights, the Global South is pushing back, forcing nations to reckon with their own trash issues. However, these efforts have been met with resistance.

In 2018, the East African Community (EAC), a regional trade agreement similar to NAFTA, introduced restrictions on the importation of used clothing, intended to protect local textile sectors. In response, the US Trade Representative threatened to suspend the African Growth and Opportunity Act (AGOA) privileges. AGOA is instrumental in providing sub-Saharan African countries with duty-free access to the US market for approximately 6,500 product tariff lines, including apparel and footwear, wine, chemicals and others.

Colonialism has not only played a key role in geopolitics, but it has also shaped the fashion industry over the decades. While secondhand clothing exports are positioned as a way to help low-income countries revitalize their economies, they are also a convenient way to offload the issue of overproduction and overconsumption. The demand for Western clothing in Ghana was first introduced when it was under the colonial rule of Great Britain. When the African nation gained independence in the late 1950’s, US businessmen saw this as an opportunity to export and offload secondhand clothing while earning an additional stream of income.

In order to stop the perpetual cycle of harm, we must acknowledge the colonial roots that are driving the secondhand clothing trade.

THE GLOBAL SOUTH BEARS THE BRUNT OF ENVIRONMENTAL RISKS

Accra, Ghana, is home to Kantamanto, one of the largest second-hand markets in West Africa. It is a gathering place for more than 3,000 traders and frequented by designers and creatives. Around 15 million pieces of garments arrive in Kantamanto each week in containers filled with bales. Traders, entrepreneurs, and designers gather at the market to pick whatever they can resell at a premium, or upcycle and tailor into fresh pieces.

The rest, about 40%, is shipped off directly to the landfill, piling onto mountains of fabric tracing the outskirts of the city. In order to control the overwhelming waste and unregulated dumping, the landfills are lit on fire as a control measure. The fires can sometimes burn up to 11 months ,releasing dark smoke and toxic emissions into the air, posing serious health hazards to neighborhoods nearby – especially impoverished areas like Old Fatima, an urban slum in Accra.

If the garments don’t end up burning, some pieces wash away and end up obstructing the city’s sewage system. During months of monsoon, the blockades lead to floods, heavy mosquito breeding, and the spreading of diseases. In 2014, a cholera outbreak in the Greater Accra Region killed 243 people, due to poor waste management and lack of clean water.

Beyond the city, the excess materials are also impacting the marine biodiversity. Lighter scraps often wash ashore from the ocean as clothing “tentacles,” comprised of entangled fabrics up to 10 meters long, littering the coastal regions. Much of the discarded garments are made up of synthetic fabrics, like polyester and nylon, which can take up to 200 years to decompose.

Due to the common acts of overproduction and overconsumption within the fashion industry, communities like Accra end up bearing the brunt of the environmental hazards caused by the unsustainable habits of the Global North.

THE HUMAN COST OF WASTE COLONIZATION

Not only are the ecosystems and communities deteriorating, the burden of the industry is falling on the shoulders of the local workforce, endangering its livelihood and physical well-being.

When bales of used clothing arrive in Ghana, they are transported on foot between importers and retailers by kayeyi, who are the female head porters. Carrying bales on their heads weighing up to 200 pounds, many of these women, as young as 14 years old, sustain serious chronic injuries to their backs and necks, while earning meager wages for their work. These women are the backbone of the industry, yet they face life-threatening health risks every day without any social protection.

Other than mistreating female laborers, fast fashion is endangering the local second-hand clothing trade by churning out heaps of cheap clothing. Not only is the low price outcompeting the local designers, it is also affecting the trader’s and importer’s profit margins.

Because the quality of the items in the bales have declined, the resale value has also plummeted. Like “Storage Wars,” local retailers front money for these bales without knowing their contents. The lack of high-quality or salvageable selections means that they are potentially losing money, or may not be able to pay back the loans they secured from their families, financial institutions, and middlemen. Many rack up high amounts of debt over time.

The current structure exploits the people at the bottom of the ladder, while powerful corporations in the Global North reap most of the financial benefits.

Kantamanto is a stark example of the disastrous environmental and human impacts textile waste can have on a local community. Yet, the Global North continues to exert its economic and political dominance to escape the responsibilities of its own mess and mask the truth from the public.

With an overproduced and overconsumed supply chain, time and space are running out. Even when waste is shipped off to other parts of the world, it remains a problem of this planet. Understanding the realities of the second-hand clothing trade through the lens of Accra citizens challenges us as consumers to rethink our relationship with our clothes and challenge the current fashion structure.

Despite being an outlet for cast-offs around the world, creators and designers in Kantamanto view these “unwanted” garments as resources to be reutilized through upcycling and innovation. The secondhand culture is embedded in Accra’s traditions. Locals often refer to the imported clothing as “broni we wu,” which translates to “dead white man’s clothes,” because the concept of discarding nearly-new garments is completely foreign to them. In fact, 90% of clothing used in Ghana is second-hand.

“Kantamanto’s retailers re-commodify, or extend the life of, between 20-30 million items a month. And they do so by not only selling clothing but also washing, mending, over-dyeing, ironing, tailoring and upcycling items. Kantamanto is equal parts mall, studio and factory,” said Liz Rickett, Co-Founder and Director of The OR Foundation in an interview with Fashion Revolution.

This proves that it is possible for all of us to extend the life span of our clothes beyond a few wears. Western consumers are now purchasing 60% more clothing and keeping that clothing about half as long as they did 15 years ago. Instead of taking advantage of the people and talent in Accra, the fashion industry must do better to build a new and equitable system, so it can support and empower the communities carrying the load for rest of the world.

We all have a part to play in cleaning up this mess. It requires a global effort. By learning from Kantamanto’s model of reusing and repurposing used goods, we can hopefully begin to repair our planet and reimagine a fashion industry that is just for all.

WHAT YOU CAN DO

Cecilia Huang is a writer and non-profit professional based in Vancouver, Canada. When she is not learning or creating, she can be found crafting tea lattes and exploring her west (best) coast backyard.