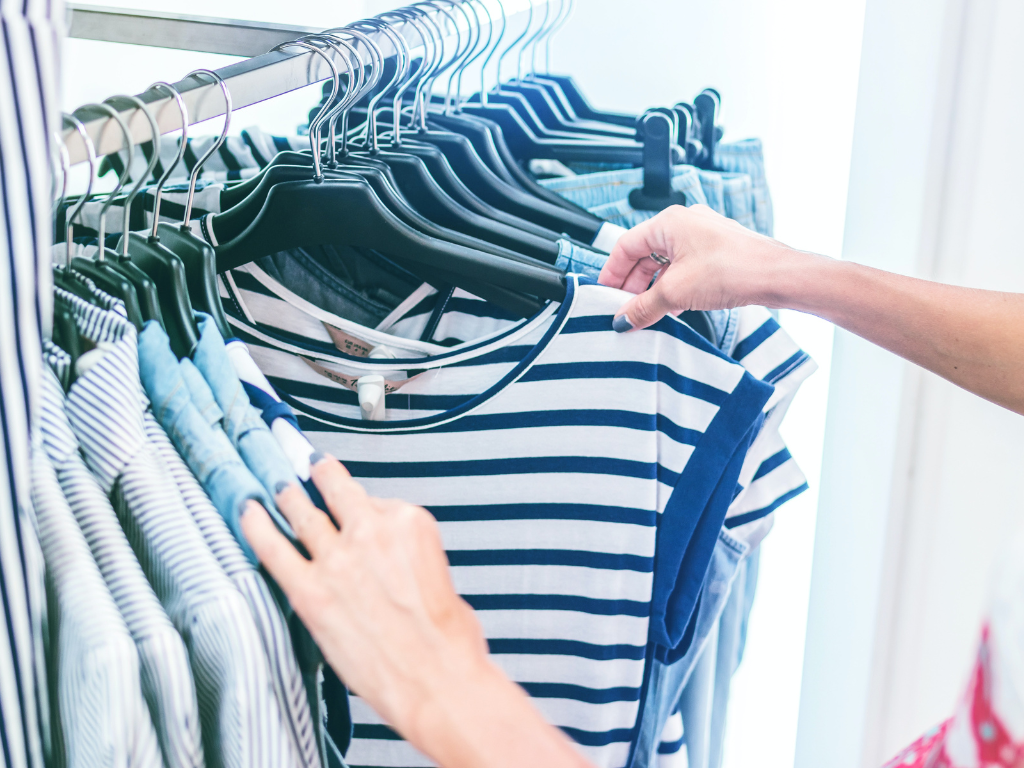 You may think that shopping at TJ Maxx, Marshalls, and Ross is doing the environment a favor. After all, these brands have built their reputations on selling overstock from traditional clothing brands at discounted prices to consumers looking for affordable alternatives. Better to buy from these off-price retailers and save unsold product from going to the landfill, right? Well, like most working theories orbiting around the engine of consumerism: it’s complicated.

In addition to selling discounted clothing from major apparel brands, Ross and TJX (parent company of TJ Maxx and Marshalls) all manufacture their own garments in addition to the product they’re picking up off of other brands.

According to a 2017 story from the Boston Globe, T.J. Maxx started out in the late 1970s specializing in “the unflashy business of buying department store castoffs and out-of-season styles at cut-rate prices.” However, two decades later in the 1990s, its business model shifted — the chain became “large and popular enough that manufacturers began producing goods specifically for its stores.”

TJX states that it buys from vendors ranging from big brands to boutiques, including designer labels. As for the company’s own manufactured product, in a Global Corporate Responsibility Report from 2020, TJX notes that “some of our merchandise is manufactured for us and some we design, particularly when what we are seeing in the marketplace is not the right value for our customers, meaning the right combination of brand, fashion, price, and quality.” Ross follows the same model.

So does this possibly make it easier for TJX and Ross to slide under the radar for poor manufacturing practices?

While this information isn’t necessarily hidden from the public, it is rarely talked about — and with good reason, at least when it comes to marketing. Acknowledging that Ross, TJ Maxx and Marshalls, all brands that have built their entire standing around being the go-to seller of overstock, are, in fact, apparel brands in and of themselves completely changes the conversation around manufacturing accountability.

How Much Product Actually Is Overstock?

So just how much of the product one sees in a Ross, Marshalls, or TJ Maxx is actually ordered and manufactured by Ross and TJX? While neither TJX or Ross disclose specific numbers, TJX writes that they have “some merchandise manufactured” and Ross states that ”the minority of merchandise” sold in their stores is manufactured directly for them. These statements are rather ambiguous in their nature — technically, to comprise a minority of merchandise, the original Ross product could still account for up to 49% of the store’s total product. As for TJX? “Some” is about as inconclusive a term as one can use.

In addition to this, there aren’t “TJX” or “Ross” labels denoting the companies’ own products, making it difficult for customers to definitively determine whether they are buying overstock from an external company, or, as could just as likely be the case, original product made TJX or Ross. So does this possibly make it easier for TJX and Ross to slide under the radar for poor manufacturing practices?

Ross Dress for Less is one of the top violators of wage theft in California apparel factories, having benefited for years from the state’s sweatshop conditions.

TJX and Ross provide information about their auditing processes online, but neither provide a list of factories or audit results. This lack of transparency is problematic, as it leads to a lack of accountability. Without disclosing factory names or audit results, TJX and Ross can make whatever claims it likes about what happens throughout their supply chains, but there is no transparency to prove it.

According to a 2017 Sourcing Journal article, the Department of Labor warned TJX that it “needs to do better at policing its manufacturers—especially considering many are engaged in subcontracting to factories that are unregulated and often rife with poor labor and safety practices.” Also in 2017, the LA Times reported that the U.S. Department of Labor investigated 77 Los Angeles garment factories from April through July of 2016. Their investigations found that garment workers were paid by brands like Forever 21, Ross Dress for Less and TJ Maxx an average of $7 an hour for 10-hour days, a rate that could also go as low as $4 an hour. The investigation also stated that one worker in West Covina made as little as $3.42 per hour during three weeks of sewing TJ Maxx clothing.

Show Me the Scores

Out of a possible score of 150 on Remake’s Brand Directory, a tool that scores brands on issues such as transparency, sustainability, inclusion, and labor practices, TJX scores a (-11), and Ross a (-13). These incredibly dismal scores highlight bright red flags throughout their transparency practices and supply chains.

In fact, Ross Dress for Less is one of the top violators of wage theft in California apparel factories, having benefited for years from the state’s sweatshop conditions. And this lack of regard for the humans sewing its product only became more evident at the start of the Covid-19 pandemic.

At the beginning of the COVID-19 pandemic, dozens of major brands canceled payment to factories for completed orders using the force majeure clause in their contracts despite the product already having been completed. TJX and Ross were two of these brands refusing to pay factories, and subsequently, garment workers. And while some brands who initially did not pay for completed orders ended up making payments (due to the overwhelming pressure of the #Payup campaign), TJX and Ross were not among them. This means that garment workers did not receive payment for work completed on products manufactured for TJX and Ross.

TJX claims that “There are several issues that we consider to be ‘zero tolerance’ issues. That is, we would immediately terminate use of a factory found to be in violation of certain aspects of our program, including for example, […] failure to pay wages.” Since TJX failed to pay some factories for completed orders, it is blatantly in violation of its own zero tolerance policy. While TJX may preach ethical methods to its consumers, these values are not actually being put to practice.

Additionally, both TJX and Ross have failed to sign the International Accord. Developed as a response to the Rana Plaza tragedy in 2013, the Accord provides crucial safety measures for factory operations, and life-saving measures for garment workers.

When referring to their manufacturers in Bangladesh, TJX notes that “we must remain vigilant and continue to monitor whether our policies and practices are adequate and appropriate.” If such is truly the case, why wouldn’t TJX sign an industry-wide agreement to provide safe working conditions in Bangladesh? One might ask the same question of Ross, which notes that it maintains “a factory audit program intended to ensure compliance with [its] Vendor Code of Conduct, which includes adherence to local labor, safety, and environmental laws.”

It’s time To Be Held Accountable

If you think you’re always purchasing overstock at TJX stores or Ross, think again. Remember that these discount retailers are also brands of their own. When you leave the store with your purchase, you may not be getting a great deal on an overstock product otherwise destined for the landfill, but just another brand new item, made in questionable manufacturing conditions.

Since their inception, TJX stores and Ross have consistently marketed themselves as retail stores where you can buy brand-name overstocked product at a fraction of the cost. However, the reality of their business practices is that they are not only contributing to the overproduction of garments, but that they are also not adhering to values they claim to uphold.