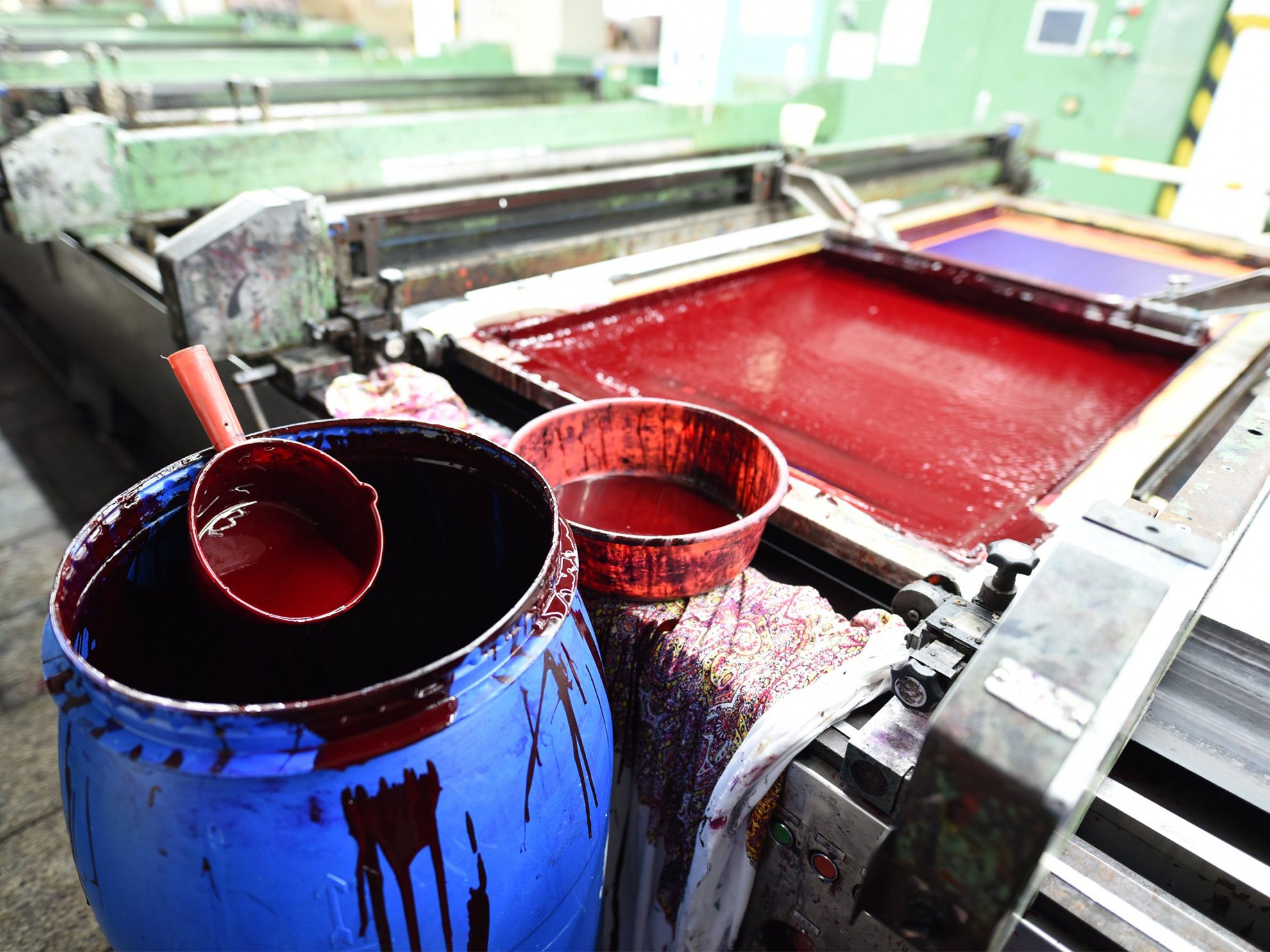 Mannequins guard the doors of Cinderella’s Closet, a bridal boutique just off the corner of East 11th Street and Santee. Tulle dresses of blue, red and purple hues churn in the wind as dueling stations of Mariachi and Hip-Hop music fill the streets, battling to be heard above the incessant honking from the road. A black Honda Civic attempts to avoid a shirtless biker weighed down by two bags filled with multicolored clothes attached to either side of his bike seat. Woven fabrics cascade from the competing storefronts as bacon and pepper scents waft into the air from the hotdog vendor on the corner.

The way we make our clothes has lasting negative effects on our environment and our personal health. The direct cause: the chemicals added to dye and manufactured fabrics and textiles used in everyday apparel.

The idea of sustainable or eco-friendly fashion has been a topic within the fashion industry for decades. The movement, emerging in the 1960s with American biologist Rachel Carson’s book Silent Spring, forced consumers to question the impact the fashion industry had beyond aesthetics. Carson’s book exposed the solemn reality that how our clothes are made contributes to widespread pollution associated with the use of agricultural chemicals.

So what relationship does toxicity have with our clothing?

Founded in 2019 to “advocate for radical and coordinated research activity commensurate with the challenges of biodiversity loss and climate change,” the Union for Concerned Researchers in Fashion (UCRF) is one of fashion’s driving forces demanding sustainability within the trillion-dollar industry..

UCRF, along with other experts in the field, ascertain that the way we make our clothes has lasting negative effects on our environment and our personal health. The direct cause: the chemicals added to dye and manufactured fabrics and textiles used in everyday apparel.

Finding the Chemicals in Our Clothing

In Greenpeace International’s 2012 report, “Toxic Threads: The Big Fashion Stitch-Up,” the organization investigated the environmental impact of brands like Armani, Calvin Klein, H&M, Victoria’s Secret, and Zara. The report found that an alarming number of the clothing tested had an increased number of harmful chemicals such as phthalates and nonylphenol ethoxylates (NPEs). Of the 141 articles of clothing tested as part of the investigation, 89 of those contained NPEs, detergent-like substances that have the potential to lead to widespread release into aquatic environments, and azo dyes, widely used to treat textiles and leathers, which can release cancer-causing compounds.

The inception of these chemicals into garments begins during the manufacturing process. Chemicals are manufactured containing NPEs and are delivered to textile manufacturers to use in processing, additionally some azo dyes are used in dyeing processes. Relaxed regulations on the usage of these chemicals leads to chemical-laden wastewater disposals containing these hazardous chemicals that then enter public waterways, such as rivers and lakes. The global textile industry then delivers clothes containing phthalates, residues of NPEs, and other hazardous chemicals to markets around the world, where we, the consumers, then buy them from brands like H&M, Zara, Shein, and FashionNova. The Greenpeace report goes on to state that “[b]rands’ inadequate policies then force consumers to become unwitting accomplices in the cycle of toxic water pollution when they wash their new clothes…as this releases these hazardous chemicals into their domestic waste water.”

As far as personal health risks for the individual wearing the clothes, it’s possible.

As far as personal health risks for the individual wearing the clothes, it’s possible. According to the National Biomonitoring Program’s Phthalates Factsheet provided by the Centers for Disease Control and Prevention (CDC), the CDC has said that the human health effects of phthalates are “unknown,” but “exposure is widespread” in the US. Of those affected, women have higher levels of exposure for several phthalates and phthalate alternatives that are used in soaps, body washes, shampoos, cosmetics, and similar personal care products and apparel. In her book Conscious Closet, Remake Director of Advocacy and Policy, Elizabeth Cline states that exposure to these harmful chemicals can result in skin irritation, allergic reactions, and asthma, but there is the potential for more serious health risks such as cancer, reproductive and developmental problems.

One of the biggest proponents of the use of chemicals in our clothing is the fast fashion and wholesale industry.

“People should be shocked,” said Miriam Diamond, an environmental chemist and professor at the University of Toronto, in an interview with the Canadian Broadcasting Corporation. “This is hazardous waste,” Diamond continued. “I’m alarmed because we’re buying what looks cute and fashionable on this incredibly short fashion cycle. What we’re doing today is to look [for] very short-lived enjoyment out of some articles of clothing that cost so much in terms of our … future health and environmental health. That cost is not worth it.”

A Disproportionate Impact on Communities of Color

In an article published to Environmental Health in 2018, authors Rachel Bick and Erika Halsey stated that “globally, 80 billion pieces of new clothing are purchased each year, translating to $1.2 trillion annually for the global fashion industry.” And of those 80 billion pieces, an estimated 85% of the clothing Americans consume is shipped to landfills totalling nearly 3.8 billion pounds annually, or 80 pounds per American, per year.

“This water causes sores on the body,” said an anonymous resident from Savar, a city in central Bangladesh, in an interview with CNN. In the interview, he goes on to describe the rivers surrounding the manufacturing district that have run black from textile factories causing fevers and skin irritation on residents’ hands and faces.

“People don’t have any other option so they have to … drink (from) it. They are hopeless, they don’t have money to install a filter or drill (for) deep water,” said Ridwanul Haque, chief executive of the Dhaka-based NGO Agroho, in the same interview.

Many rivers and lakes in China — the world’s largest clothes manufacturer — were so polluted that they were effectively dead, as a result making water not polluted by dyes and chemicals hard to come by for those communities.

Countries such as China, India, and Ethiopia are among those that manufacture a bulk of the world’s clothing, due to the cheaper costs of labor in countries that tend to have larger rural and poor populations. In 2020, CNN ​​interviewed Ma Jun, one of China’s leading environmentalists who told CNN that before he founded the Beijing-based Institute of Public and Environmental Affairs (IPE), many rivers and lakes in China — the world’s largest clothes manufacturer — were so polluted that they were effectively dead, as a result making water not polluted by dyes and chemicals hard to come by for those communities.

Ma continued: “Every season we know that the fashion industry needs to highlight new colors…each time you have a new color you’re going to use more, new kinds of chemicals and dyestuffs and pigments and catalysts,” essentially poisoning the water supply of workers and people living next to these textile and dyeing factories.

How to Cut Chemicals Out of Your Clothing

With growing evidence of the negative and toxic effects the chemicals in our clothing have on our health and that of laborers, we must look to change our buying habits. From upcycling and secondhand fashion crazes on TikTok to annual calls to end the purchasing of toxic fast fashion on sites like Twitter and Instagram, we’re seeing an uptick in the demand for more sustainable options.

In 2020, upcycling, taking clothes previously owned and sewing them into something new, became a trend on TikTok with creators designing chic outfits from oversized hand-me-downs and thrifted apparel. Online second hand stores like Depop and Ebay also continued to grow in popularity with this trend.

The reuse of clothing has proven to reduce the amount of waste associated with the manufacturing of our garments. If this trend of recycling continues, it will allow us to limit the amount of toxic waste that is discarded into public waterways around the world during the fabrication process, resulting in cleaner water for communities. Furthermore, with the reuse of clothing and fabrics, the frequency with which those garments have been washed reduces the amount of chemicals that live within the clothes, resulting in reduced bodily exposure to these harmful chemicals.

Mia McNeil is a writer, non-profit professional, and fashion enthusiast originally from Chicago, Illinois and based in Los Angeles, California. As a journalist, she is highly motivated by social justice and passionate about giving a voice to those we rarely get to hear from.