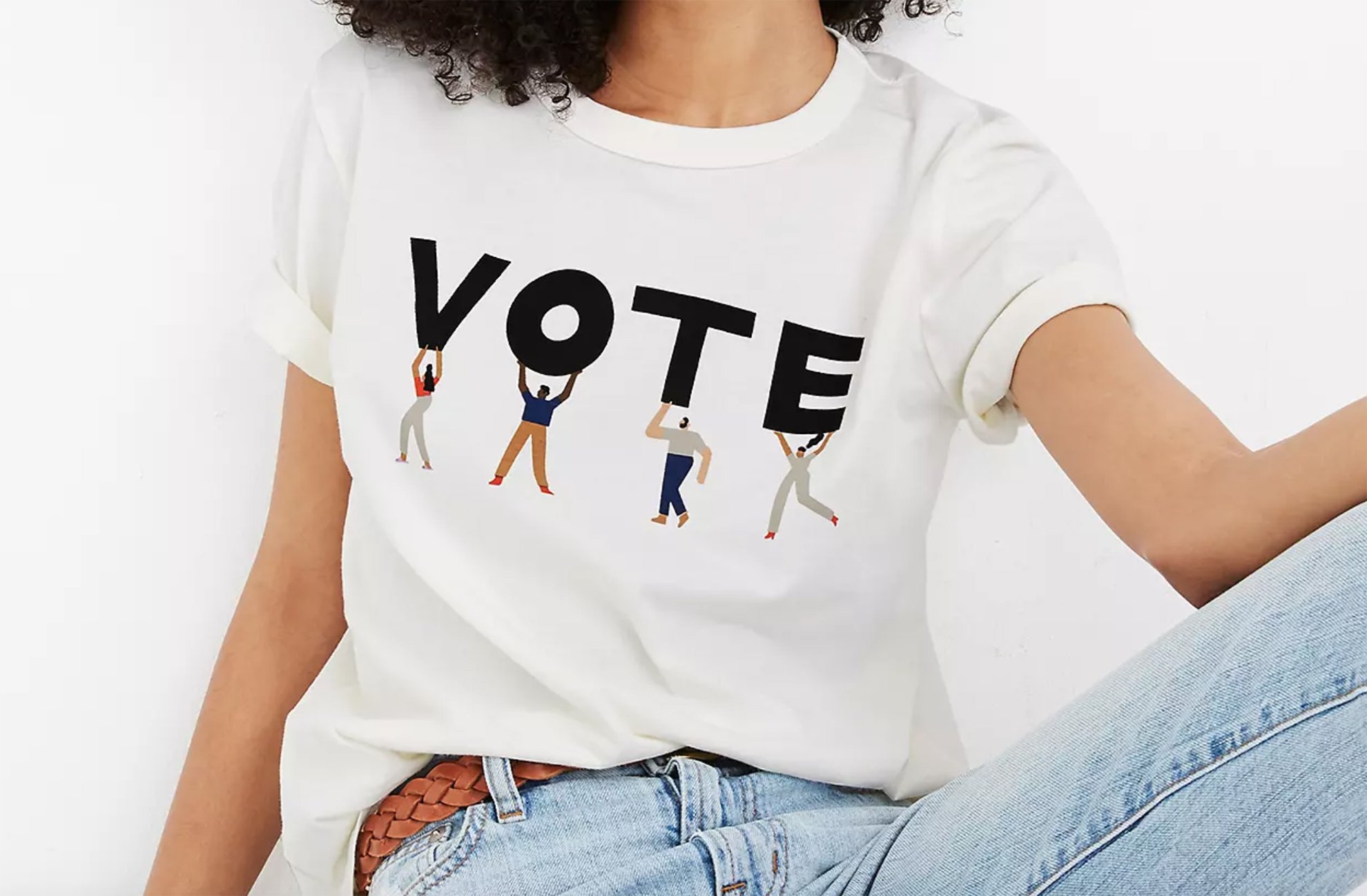 As we speed closer to the 2020 election that many have been waiting four years for, brands are quite literally capitalizing on this opportunity of collective attention to make some money. Vineyard Vines, Madewell, Fabletics, VS Pink, Gap and Urban Outfitters are just a few companies which have come out with voting-themed merchandise in an attempt to garner goodwill points with customers. Retailers like these have come to realize that consumers want more from the companies they buy from — accountability is undoubtedly an important aspect of a modern brand, yet they have taken that as a call to sell sentiments as platitudes back to them. Brands need to do much more than print “vote” on a t-shirt to make a difference.

Gap and Urban Outfitters have used a slew of influencers and celebrities to promote their “vote” t-shirts — attempting to prove relevancy and ethics in one go. Though, it doesn’t take much research to understand the disconnect occurring here. Scroll through the comments on some of Gap’s Instagram posts and you’ll see customers holding them accountable for their unpaid wages to factory workers, use of slave labor, and complete lack of regard for the well-being of those in their supply chain.

As they encourage customers to exercise their right to vote they are actively suppressing the rights of those who make their products.

Both of these retailers are on Remake’s #PayUpFashion petition for these reasons exactly, and neither of them can correct the damage they’ve done with half-hearted efforts and a t-shirt that reads Vote.

@iamjojo will be going LIVE in a few hours (8pm ET/5pm PT) with @gaphousesessions in support of @rockthevote and we can’t contain our excitement. Leave a ?‍♀️?‍♂️ if you’re tuning in!

It’s not that brands shouldn’t be encouraging citizens to vote, it’s that they don’t actually care if they do. This has been discussed at length at Remake in terms of the vague feminist slogans slapped on t-shirts from brands which continue to exploit the labor of women along their supply chain. It also occurs every year during pride month as corporate America trots out rainbow t-shirts, hoping the LGBTQ+ community will forget that they are silent on gay rights issues the other 11 months of the year.

Activism is not a shirt you can try on once a year, quite literally.

“Vuitton slapping ‘VOTE’ across its collection is the apogee of corporate luxury activism, but it’s also an inadvertent comment on the hysterically noncommittal shrug of that activism. ‘VOTE,’ but you just as well could ‘SKATE’ or ‘DRIVE,’ we don’t care. An instant relic,” Max Lakin wrote on Twitter after Louis Vuitton’s SS21 fashion show. His commentary is spot on and highlights another aspect of what he refers to as “corporate luxury activism” — it’s outdated. Consumers, especially younger generations, are too smart for these marketing ploys from brands which otherwise don’t take an interest in activism. They can sniff it out.

“An instant relic,” he asserts, because the only customers foolish enough to don one of these Louis Vuitton graphic tees is an already out-of-touch individual. It’s the same people still arguing for incremental change and hoping for civility to return to politics.

It’s #NationalVoterRegistrationDay and with less than two months until the 2020 election, we hope you’re ready to stay involved and aware and, most importantly, to spread the word about the importance of voting. To help, we’ve partnered with @iamavoter and six content creators to discuss why they’re voting and how they’re encouraging others to do the same. Head to the link in bio to shop the Ballot Box tee kit and to read more with these six creatives—we hope you’ll find them as inspiring as we do. Are you registered to vote? Check your status by texting UOVOTES to 26797. #UOCommunity

“Those brands without a strong track record of social involvement also risk setting off alarm bells in the minds of consumers. For luxury fashion brands in particular, selling high-priced ‘vote’ products and donating a marginal percentage of sales to non-partisan organizations is ripe for backlash,” Davianne Harris, partner and head of strategy for advertising firm Oberland, told Business of Fashion.

Of course, we live in a capitalist society so fashion brands have to make money to survive, but pretending that it’s all virtuous producing is absolute nonsense.

Sure, many of these brands have great reach and this is an important message, this is an important election, but how many people are actually affected by these PR stunts? How many people will actually see a vote t-shirt from Gap or Urban Outfitters and say wow, I wasn’t going to vote, but now that they’re selling me this graphic tee I definitely will? According to The Atlantic, the most effective way to get people to vote is by doing in-person canvassing (difficult during a pandemic) and phone calls (requires a lot of resources), yet most brands are sharing messages via email and social media.

morning coffee / with a side of democracy. our vote tee is officially restocked. snag yours before the election—100% of the purchase price of each one sold goes to @aclu_nationwide through 11/3. plus, insiders score double points when they shop the vote collection. ?: @emmalapetite #everydaymadewell

“Getting out the vote in America is really, really hard, and no matter who sends the emails, they can do only so much to move the dial,” Amanda Mull explains. This is because brands are normally targeting a group of people already informed about the election.

Even retailers which reach a larger swath of people than a luxury brand like Louis Vuitton will most likely be sending these messages to privileged individuals who don’t actually need the voting information.

In addition, most companies are only donating a small percentage of proceeds from voting-themed products to relevant causes. For example, Banana Republic is donating $5 to Rock the Vote for every $10 vote mask sold, along with a maximum donation of $25,000. Donating 50% of proceeds may seem substantial but even with the negative effects of the pandemic on retail — even if all 328.2 million people in the US purchased a mask and Banana Republic ditched its donation cap — it would still be a drop in the bucket for a company owned by Gap Inc., which raked in $16.4 billion in net sales last year. Other brands such as Vineyard Vines and Fabletics haven’t committed to donating any proceeds at all.

These products and campaigns benefit the companies far more than they do any actual good. It’s lazy activism and incredibly performative.

If these brands really cared, they would put their money where their mouth is and donate to organizations like Stacey Abrams’ Fair Fight or Common Cause. Brands which are turning their empty stores and warehouses into polling locations, providing paid time off for voting, or simply partnering with organizations to help to share voting information without any monetary incentive are doing the real work which companies selling inauthentic-themed merchandise claim to be doing.

The right and privilege to vote is not to be taken lightly. It’s fantastic that the conversations around participating in democracy and being an active citizen are happening widely, though quantity cannot overwhelm quality. Spreading the message is great. Spreading the right message to the right people? Life changing. You can’t please everyone, though you can make a difference.

As for individuals, whether donning vote-themed apparel or not, we must make our voices heard. We must demand that brands use their positions of power to make systemic change in the industry by signing petitions like #PayUpFashion, demanding more of brands, and using our vote to elect leaders who will do the same for the country at large. We have the power.