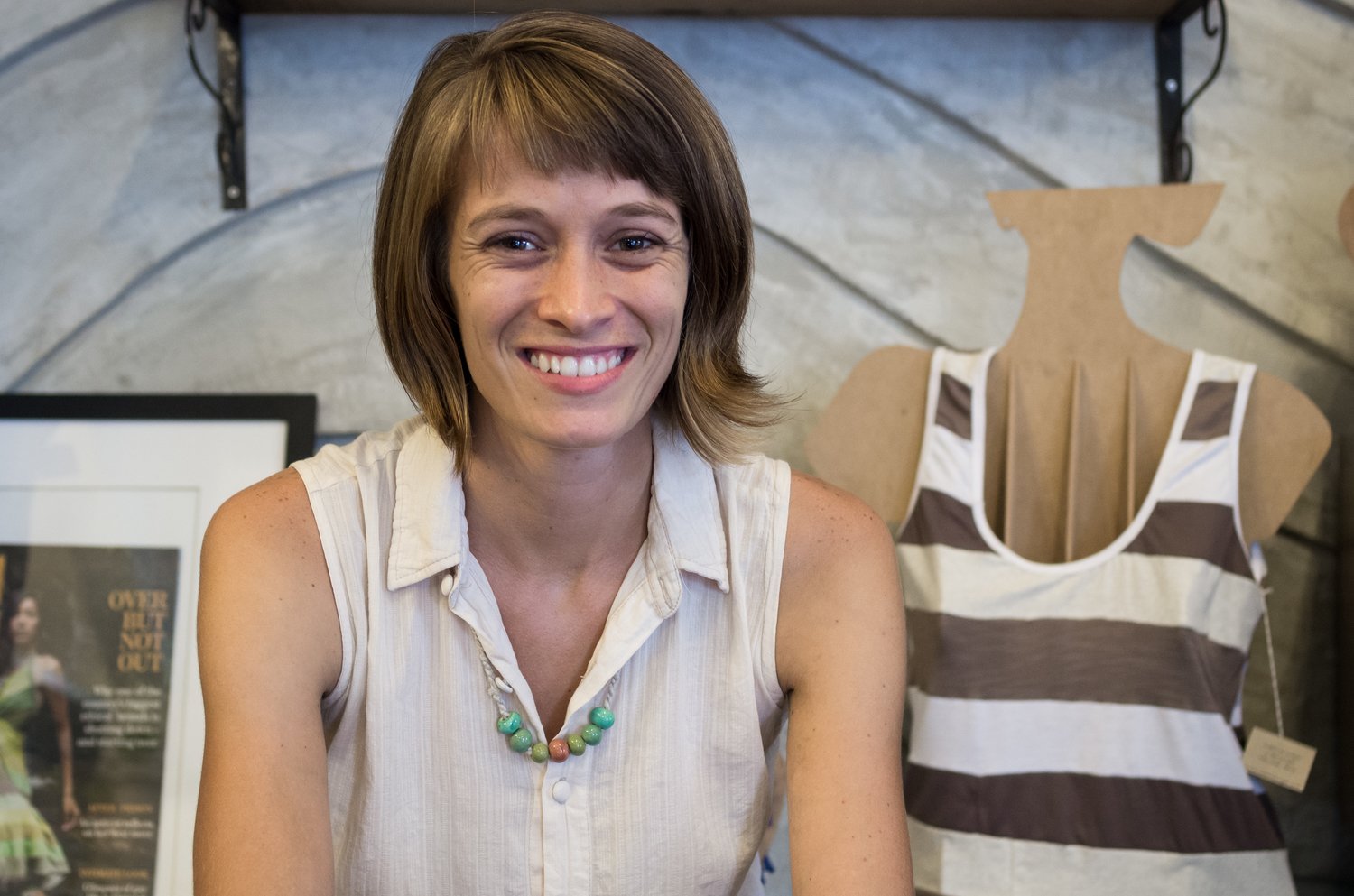 What started out as the intention to support entrepreneurial opportunities for artisans in Cambodia organically evolved into Tonlé, a zero-waste brand combating one of the most troublesome issues in the industry today: textile waste.

It all began on a trip with a friend to Cambodia. Tonlé’s founder, Rachel Faller, became immersed in the country’s culture as well as the beauty of its traditional handicrafts: “It was the first time I had come into contact with artisan organizations who were trying to work with fair trade principles and find a better kind of employment for their workers and members.”

“It really inspired me to see another way of doing things in the textile and fashion industry.”

In 2008, after returning to the states, Faller applied for a grant and was awarded a Fulbright Scholarship to research artisan groups in Cambodia. Working with a number of local craft organizations, Faller learned about their methods, traditional practices, and business models.

“What I saw was that a lot of them were doing a really good thing socially, but they didn’t really have a product that could be marketed to the global market nor compete in a way that would help them combat those problems in the garment industry on a larger scale. At the same time, I had a selfish motivation to make clothing that I would want to wear myself because I found myself wanting to buy ethically made clothing and not being able to find it.”

Looking to create a product that would not only provide steady work for artisans, but be affordable and ethically made, Faller decided to start her own business– something she admits she had no idea what she was getting into. Soon she employed four women she met through one of the NGOs she was working with, some of whom struggled to find work because they had been diagnosed HIV positive.

“Originally I had hoped to help them start their own business. It became clear through talks with them that they really just wanted a stable job and not necessarily to run their own business. So that grew into us starting a business together. At first, we didn’t have a workshop or anything– and it gradually grew from there.” 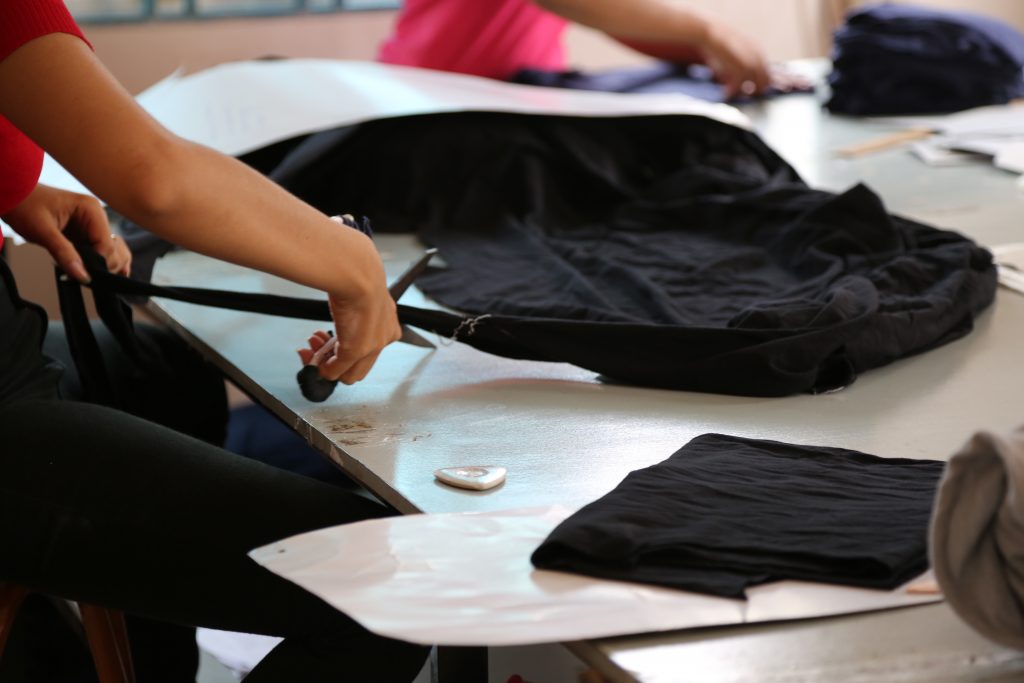 “Our workshop where we produce [today] is somewhere between a factory and a small scale business. We have about 30 people working in production and they work in small teams. We have a cutting team, a sewing team, a printing team. Some products they work on as a team, some products they work on individually. Products are still broken down into steps so it’s not like one person makes one product, but it may be 4 or 5 steps instead of 60 like in a factory assembly line.”

“We provide a combination of a base salary and a per-piece rate to our workers. They will always be guaranteed a minimum base salary, but they are also able to earn double maybe even triple that base salary if they produce a lot and produce well. But we only open our workshop for 8 hours a day. A lot of factories work 16 to 18 hours a day – that’s pretty normal in Cambodia. But what kind of quality of life are your going to have if you commuting to work at 4 in the morning, working for 16 hours and then come home and try to take care of your kids? We want our workers to be able to have a good quality of life.” 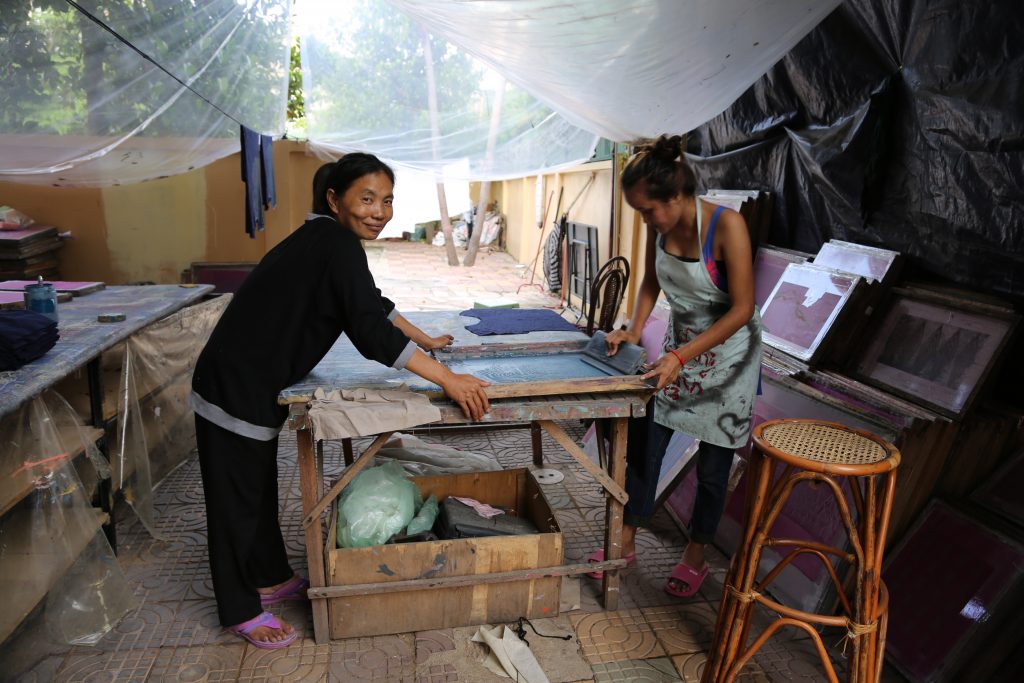 “When I first came to Cambodia, minimum wage was about $60 a month. It’s gone up more than double since then which is a good thing, but there’s still a long way to go. There are still a lot of problems in the garment industry here, but there’s more transparency. I think the world is becoming more aware of what’s going on in the factories so that’s putting more pressure on brands. Some things are improving, but there are still many things that need to change.”

With an estimated 1 million tons of textiles being dumped into landfills each year, one of those things that need improving upon is waste. Operating zero-waste, tonlé uses creative pattern making to utilize 100% of any material they work with in addition to generating garments from remnant materials.

“There’s a huge amount of waste generated along the supply chain: from problems in the milling, spinning and dyeing where a fabric has been made in the wrong color, to cutoffs that are generated in the cutting process, to fabric that has tiny flaws in it so that the whole piece can’t be used. Products are even tossed out during quality control processes, not to mention everything that gets thrown out after retail seasons!” 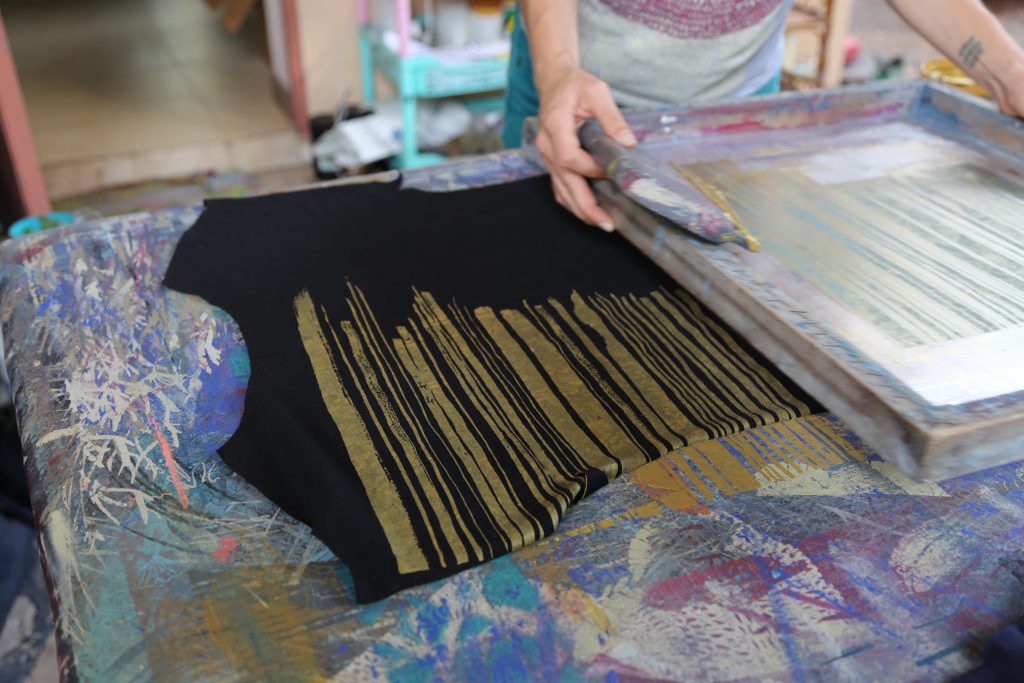 As a country, Cambodia generates a lot of textile waste. Faller accounts this to the country’s high rate of quality control failure and the fact that many of the factories are foreign owned. In contrast, Tonle, the Cambodian word for “river”, provides equal opportunities to each of its employees who consider each other members of a ‘second family’.

“Investing in worker capacity is something that is hard in the short term, but much better for everyone in the long run because you’re going to get better quality products, you’re going to be more efficient, you’re going to have less fabric wastage. In our workshop, when people have opportunities to rise up into management, when they’re getting opportunities to train and learn new things and their not having to make the same product every day, where they get to try new things, where they can move around to different teams, they’re much more satisfied in their jobs, they’re much happier, and they produce better quality work and they stay longer. So, I think there’s a business case for that as well as a human rights case for that.”

“…Coming from Parsons, the usual approach to zero waste involves zero waste patternmaking. Instead, Rachel and her team go to remnant fabric markets and purchase leftover fabric from factories. She uses regular pattern making and cutting techniques, but uses 100% of the scraps of fabric and even thread. The scraps get reinvented either into strips which create jersey yarn to knit and weave with into new designs or they get cut into smaller wider strips and mosaiced into a popular shirt design. The smallest scraps and threads are put into a blender and made into stationery paper.”

“As soon as Rachel described their workshop at breakfast, the word ‘home’ resonated with me and I could tell that it was going to be a pretty pleasant place to have a business (compared to ‘factory’). From the moment we stepped inside the gate you could feel it, it was such a special place. There were a group of women at tables in the front yard knitting together, and they welcomed us warmly with smiles. All Tonle staff is paid fairly and can earn incentivised extra pay if their team piece rates are made. In terms of hiring, they try to employ women that are HIV positive as this is a very common reason for women to lose their jobs in Cambodia.”

“It was refreshing to listen Rachel speak about her work as a designer and a business owner, having to start from the bottom and evolve to where she is at right now. It’s different than listening to designers at bigger companies speak, because those designers only design and do not do much on the business end of things, but I have always wanted to own my own business while still being a designer. Rachel’s workshop as it is now is an impressive feat, because it does not compromise any of her ethics, while providing a stable income and warm worm environment for its workers and a fully fleshed out end product.”

Andrea Plell is a freelance writer, fashion consultant and artivist passionate about engaging a paradigm shift in the fashion industry. Bay Area-based, Andrea supports thoughtful designers who are making a difference in the world through Ecologique Fashion.