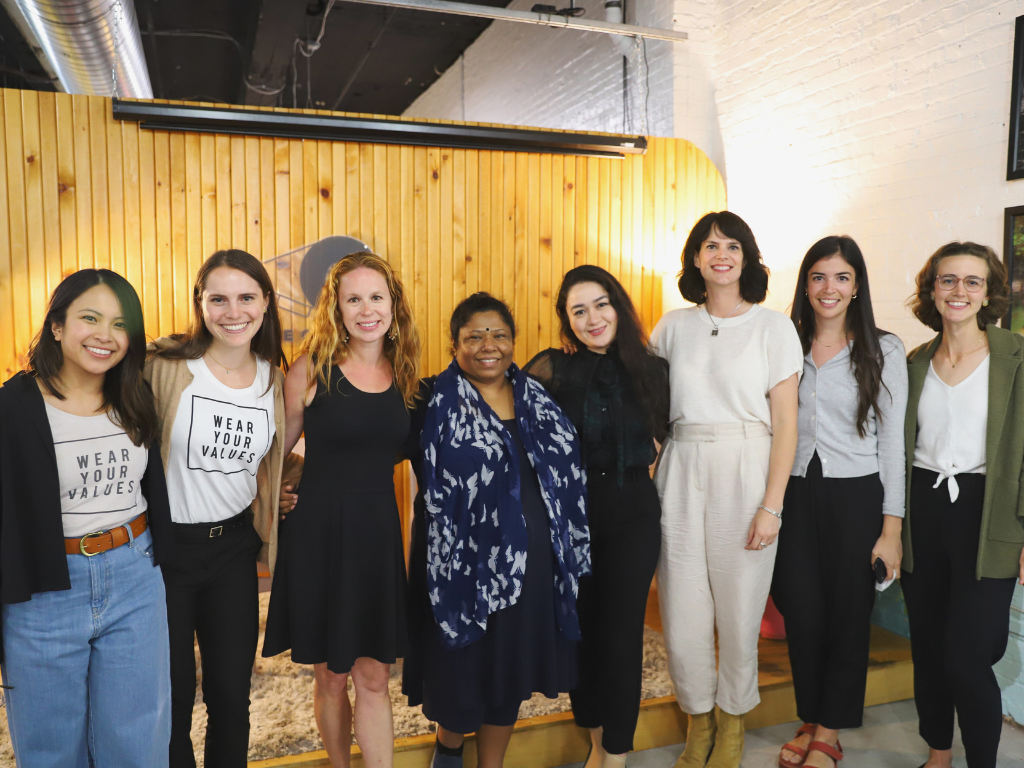 Despite employing over 75 million people, there is an immense lack of basic labor rights legislation implemented throughout the global fashion supply chain. From unsafe working conditions to wage theft, it has become the standard for garment workers to be subjected to horrific, life-threatening conditions around the globe. Time and time again, we’ve seen that the industry has chosen profits over people.

Remake’s most recent panel with The Outrage, a network of political activists leveraging fashion as a method of propelling social change, discussed these current labor rights abuses present within fashion in Washington D.C. on June 22, 2022. Remake’s Advocacy Researcher, Laurel Anderson Hoffner, moderated the panel, opening with the reminder that the fashion industry is “largely unregulated, which allows for a lot of human rights and environmental issues to occur.” Hoffner continued, stating that because of the apparent lack of regulation throughout the industry, “policy is one of the ways that we can act and fight some of the issues like unfair pay, modern slavery, and unsafe working conditions.”

Within the past few years, there has been an increased appetite for fashion regulation. As panelist Elizabeth Cline, Director of Advocacy and Policy at Remake, put it, fashion is at a “watershed moment, where all of this change is happening at once.” During the panel Cline went on to explain that the Uyghur Forced Labor Prevention Act (UFLPA) that recently went into effect will contribute to a huge shift in our regulatory approach in the U.S. In addition to this, the International Accord was renewed in 2021 and work is currently underway to expand the positive impacts of the life-saving agreement into other countries. Furthermore, Cline noted the recent introduction of the FABRIC Act into Congress, a bill that aims to end the wage theft of U.S. garment workers. Outside of the U.S., Europe is looking at progressive mandatory human rights due diligence bills

People [have] had enough with all these multi-stakeholder initiatives. Voluntary schemes are not helping people.

“The impact of the pandemic on essential workers, on minorities, Black and brown women, I think put fuel on the fire,” stated Cline. “People knew things needed to change, and the pandemic brought to light a lot of things we had been frustrated about for a long time. Now we have lawmakers that are listening to us and it is exciting to see where the conversation is going.”

The pandemic brought many of the industry’s dark secrets to a head, as the previous wage and human rights violations continued to worsen. Panelist Kalpona Akter, Founder and Executive Director of the Bangladesh Center for Workers’ Solidarity, relayed Cline’s sentiments regarding the pandemic, stating that during the pandemic, she saw “the precarious side of the business” and just how irresponsible businesses were during Covid-19. Akter went on to state that during the first few weeks of the pandemic, brands started canceling orders, postponing them, or saying they were not financially competent enough to pay the bill, announcing that they were bankrupt. “These are the brands who always enjoy the bigger piece of the pie, and when there was an emergency, they just handed it off, and said they could not do anything for workers,” stated Akter. “People [have] had enough with all these multi-stakeholder initiatives. Voluntary schemes are not helping people.”

Being sustainable and ethical should not be a ‘nice-to-have,’ it’s a human right. We should all be able to go to work and be safe and earn fair pay. The International Accord has been so successful precisely because it is binding.

Although the deadly Rana Plaza collapse in 2013 is well-known and largely viewed as a benchmark in the extreme lack of ethics in apparel manufacturing, Akter explained that Rana Plaza was not the only incident that prompted legislators to campaign extensively for garment worker rights and protections.

A factory where Atker worked as a garment maker once caught fire, and she shared how she was locked on the production floor for three hours. Atker recounted that there was only one set of stairs and half of it was blocked by merchandise. Atker shared, “When we were escaping from the factory, hundreds of my coworkers, including me, were stampeded. Luckily no one died, but we were in the hospital for several days. But nothing has been improved, we had to come back after three days to the same factory and the same production floor. And the factory would be locked again the same way they used to do.” What is evident in Akter’s story is that there have been dozens, if not hundreds, of cases of fires and unsafe factory conditions that have received zero media coverage.

Since the inauguration of the Bangladesh Accord and the renewed International Accord, there have been substantial improvements in factory safety. There have been no records of fires in upwards of 1,600 factories in Bangladesh, and each factory is equipped with a fire door. According to Akter, “there is no faulty wiring to be seen and no structural problems that could be identified. Fire extinguishers, sprinklers, everything that should be in an ideal factory is there. Workers are now trained to rescue other workers during the emergency […] there is a big difference.”

During the panel, Cline noted that the voluntary participation in factory and worker safety in the fashion industry needs to come to an end through mandated, worker-driven policy. “Being sustainable and ethical should not be a ‘nice-to-have,’ it’s a human right. We should all be able to go to work and be safe and earn fair pay. The International Accord has been so successful precisely because it is binding.”

Outside of Bangladesh, the development of the Forced Labor Protection Act bill takes a stand against modern day slavery and the persecution of Uyghur peoples in China. Panelist Jewher Ilham, Forced Labor Project Coordinator at the Worker Rights Consortium, relayed to the audience that “[t]he Chinese government has been implementing a cruel campaign toward the Ugyhur people and claiming that it is poverty alleviation, forcing Ugyhur people go through vocational trainings, putting them to work in industrial parts in forced labor, forced labor in factories located next to camps.”

With the continued presence of forced labor, Jewher noted that about one in five cotton garments entering the market “could be tainted with Ugyhur forced labor,” given that about 84% of the cotton production in China is from the Uyghur region, and China is responsible for an estimated 22% of the global cotton output. Illham, who comes from Uyghur heritage, also notes that due to the intense surveillance and persecution from the Chinese government, that Uyghur workers can not freely discuss their working conditions with auditors. Signed into law in December, the Uyghur Forced Labor Protection Act is one of the most significant labor-oriented laws in the US since the 1930s.

[P]eople in the fashion industry, including on the corporate level, want the industry to be more sustainable and ethical. They want things to change.

Moving forward, the FABRIC Act stands to be one of the most monumental wins for ethics in fashion and apparel manufacturing. Ensuring that brands are legally responsible for what occurs in their factories is the gateway towards ethical apparel manufacturing. The FABRIC Act would build on the legacy of SB62, which was “innovative in the way that it asked brands to put skin in the game,” according to Cline. “In a lot of the fashion industry, brands are not really held accountable for what happens in garment factories.” Breaches in ethics and human rights are rampant in the industry because, as Cline stated during the panel, “brands are not in any way legally accountable for what happens in their garment factories.” Organizations like Remake, Bangladesh Center for Workers’ Solidarity and lawmakers are looking to change that, by asking brands to be equal partners in their supply chains.

The FABRIC Act would expand on this. Just as Caitlin Rooney, Senator Kirsten Gillibrand’s Chief of Economic Development, stated during the panel, the FABRIC Act is coming to fruition within a “renaissance in organized labor across the country,” which could prove to be advantageous if the bill clears both the House and Senate.

Take action and support the FABRIC Act by calling your Senator today.

Workers are continuing to take back the power of the factory floor, and many on the corporate level are fully in support. As Cline put it, “[a] lot of people in the fashion industry, including on the corporate level, want the industry to be more sustainable and ethical. They want things to change.” Furthermore, Cline noted that the passage of the FABRIC Act has the potential to set the tone for policies regarding fashion manufacturing globally, as its precedent UFLPA has.

Ultimately, it is important for the community of ethical fashion activists and consumers to continue organizing. Many feel that their individual voice and support is not enough to power a movement, but the truth is, there are many people with a burning desire to see change within the industry. As Akter stated, “many people think that their single voice will not make a difference — you are not single. There are many thousands asking this question.”

Want to get more involved? Sign the FABRIC Act Petition!