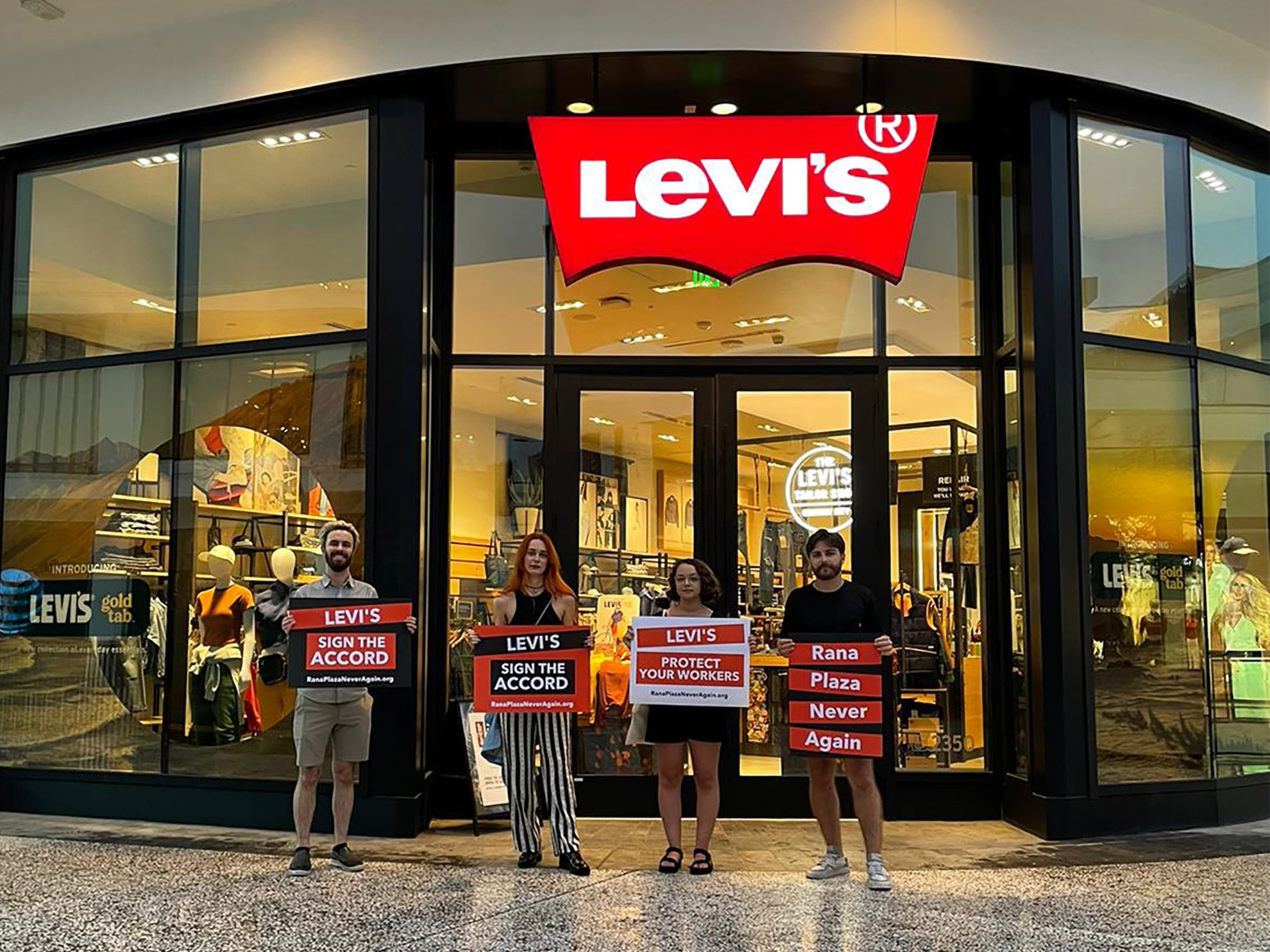 From September 5 to 11, Remake led a Week of Action, in partnership with the Sommilito Garments Sramik Federation (SGSF), a strong of 70,000 women garment makers in Bangladesh; the Labor Education Foundation; American Trade Union Workers United; Clean Clothes Campaign; and other labor rights organizations around the globe to call upon Levi Strauss and Company to sign the International Accord for Health and Safety in the Textile and Garment Industry, a life-saving, binding agreement for clothing companies.

In 2021 after much campaigning, the Bangladesh Accord was renewed and expanded to what we now know as the International Accord, adding additional protections for the health and wellbeing of garment makers, alongside the agreement’s original measures of factory building inspections and worker safety.

Currently, over 170 major retailers have signed onto the International Accord, including Adidas, American Eagle, ASOS, Bestseller, Boohoo, C&A, Esprit, H&M, Inditex (Zara), Mango, Marks & Spencer, Next, Primark, Puma, PVH (Calvin Klein, Tommy Hilfiger), and UNIQLO. Although the International Accord is a significant win for ethical fashion advocates, many major brands have yet to sign, including Levi Strauss & Company.

During our September Week of Action, in-person demonstrations were held at 18 Levi’s stores in seven countries, including Bangladesh, Pakistan, India, USA, Canada, Italy, and England. 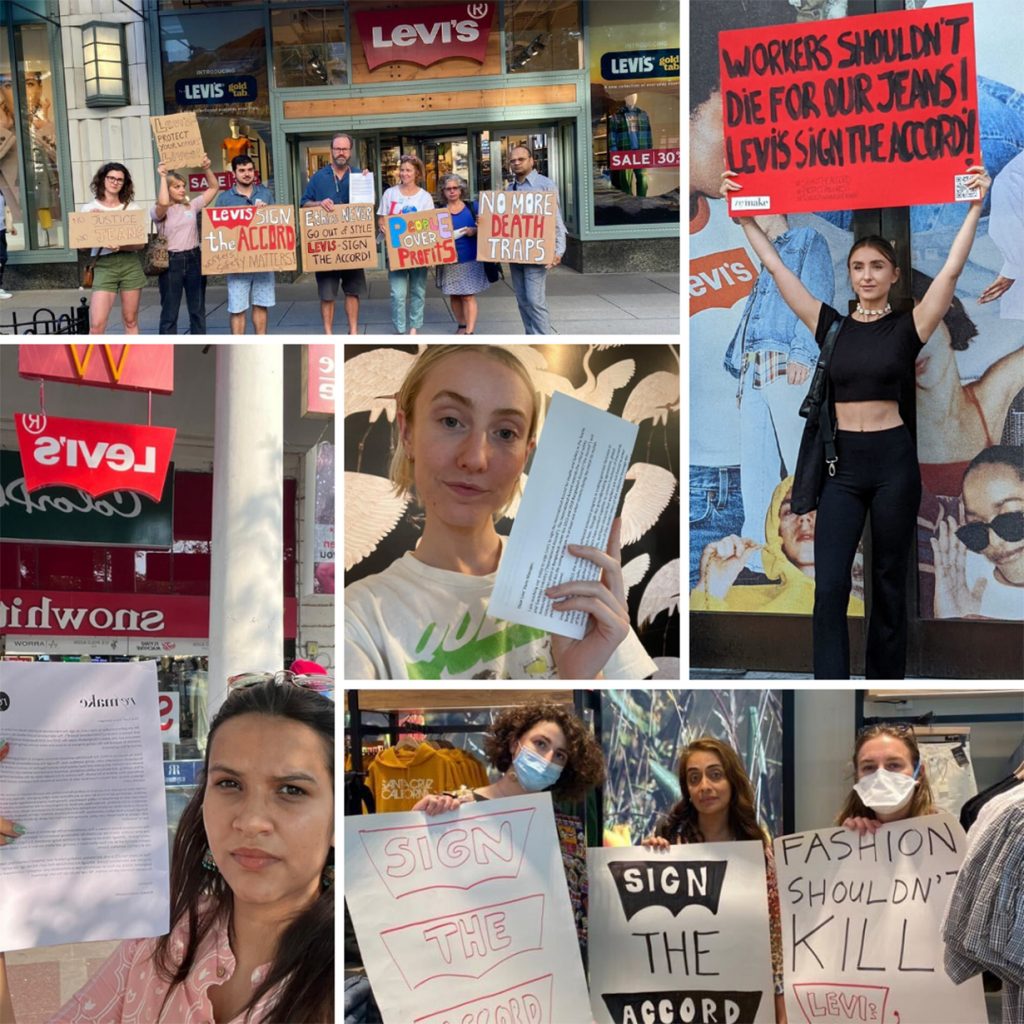 As far as tactics, demonstrators inserted barcodes with information about the International Accord into the pockets at the stores, hand-delivered letters to store managers in 17 major cities (including London, Karachi, Florence, Milan, Mombai, New Delhi, Dhaka, Bangalore, San Francisco, Toronto, Kelowna, San Francisco, Philadelphia, Chicago, Los Angeles, Seattle, and Washington, DC), and engaged with an email writing campaign to Levi’s Executive Board. Over 1,000 emails were sent by supporters to Levi’s Board of Directors and Executives during the Week of Action, including CEO Chip Bergh, Troy Alstead, Jill Beraud, Yael Garten, and COO Liz O’Neill. To date, over 2,700+ emails have been sent to the brand.

Despite the urging of several thousand activists and labor rights organizations, Levi’s did not yet agree to sign onto the International Accord, and instead responded by handing out a stock letter as a response to our Week of Action. The brand’s stock letter response to campaigners was littered with excuses and ultimately debunked by our team. 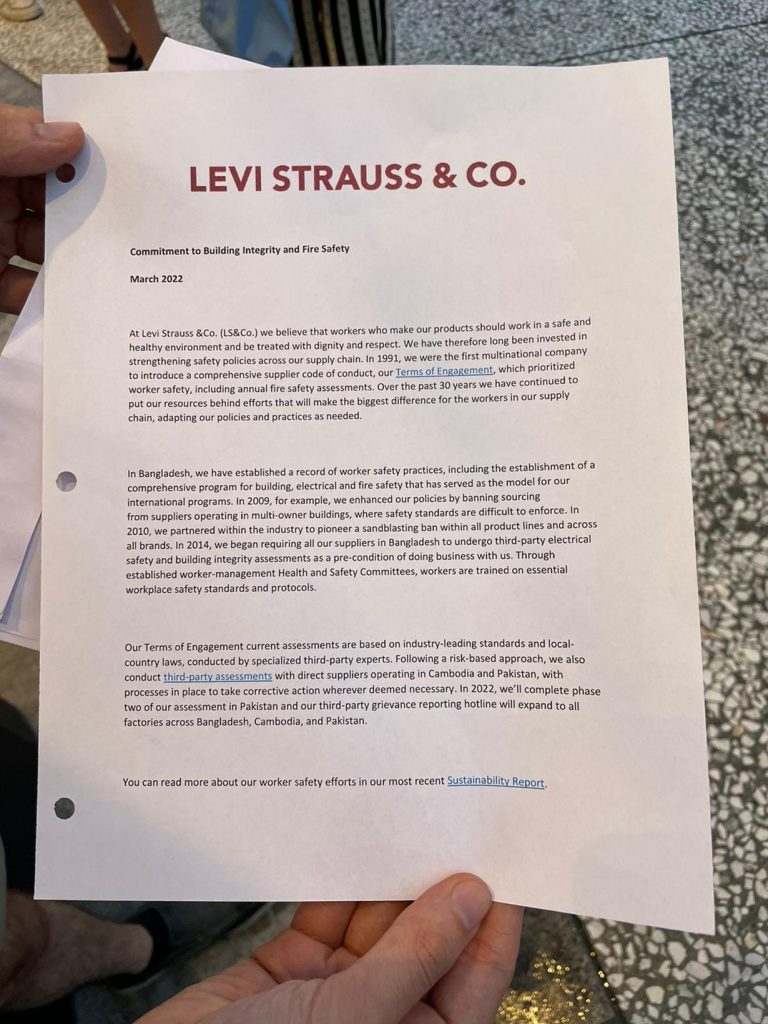 Although Levi’s has not yet signed the International Accord, there is still hope on the horizon. We know that the brand has heard the collective outcry from our campaigners, and the fight continues as we head into the busiest shopping seasons of the year.

Why Levi’s is a priority

Health and safety violations are widespread in Levi’s supply chain. A 2021 survey of 585 garment workers in 64 factories in Pakistan — in which Levi’s is a prominent buyer — found that:

1) Deliver a letter to a Levi’s store. You can head to a Levi’s brick and mortar location, ask for a manager, and hand them a copy of this letter with your name signed at the bottom. Get the Letter.

2) Print out pocket-sized barcode tags and slip them into jean pockets in Levi’s stores. Get the Barcode.

3) Demand Levi’s sign the International Accord by sending an email to Levi’s Board Executives. Send an Email. (Link not working? You can also find pre-written email copy here.)

4) Publicly tag Levi’s on social media with any of the following sample tweets, or craft your own:

You are also encouraged to create and share your own content about the Accord. When sharing about supporting the Accord, it’s very important to tag @Levis and use the #SigntheAccord hashtag.

5) Organize a protest in your city! If you’re interested in taking this action, please reach out to info@remake.world for more information.