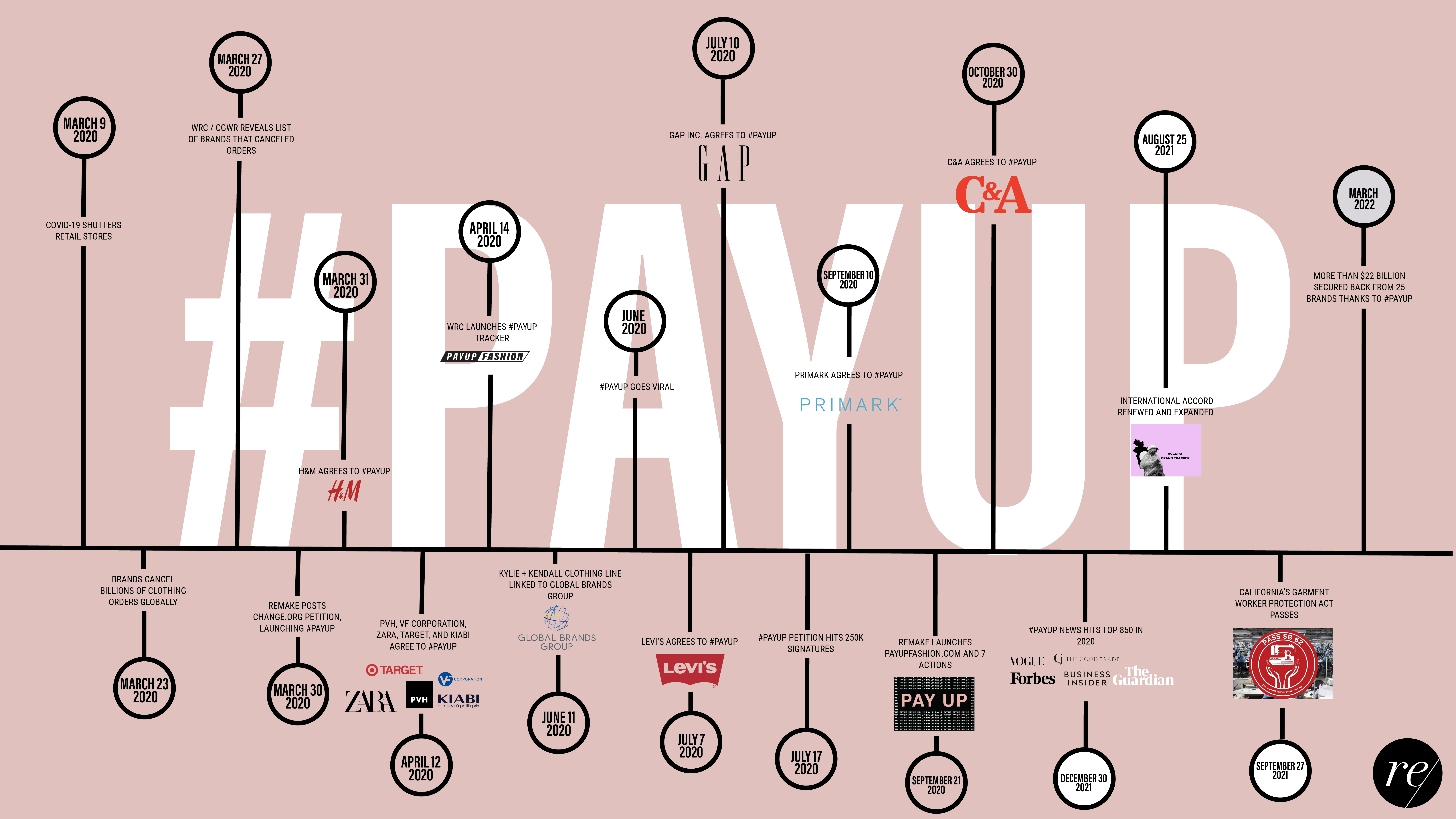 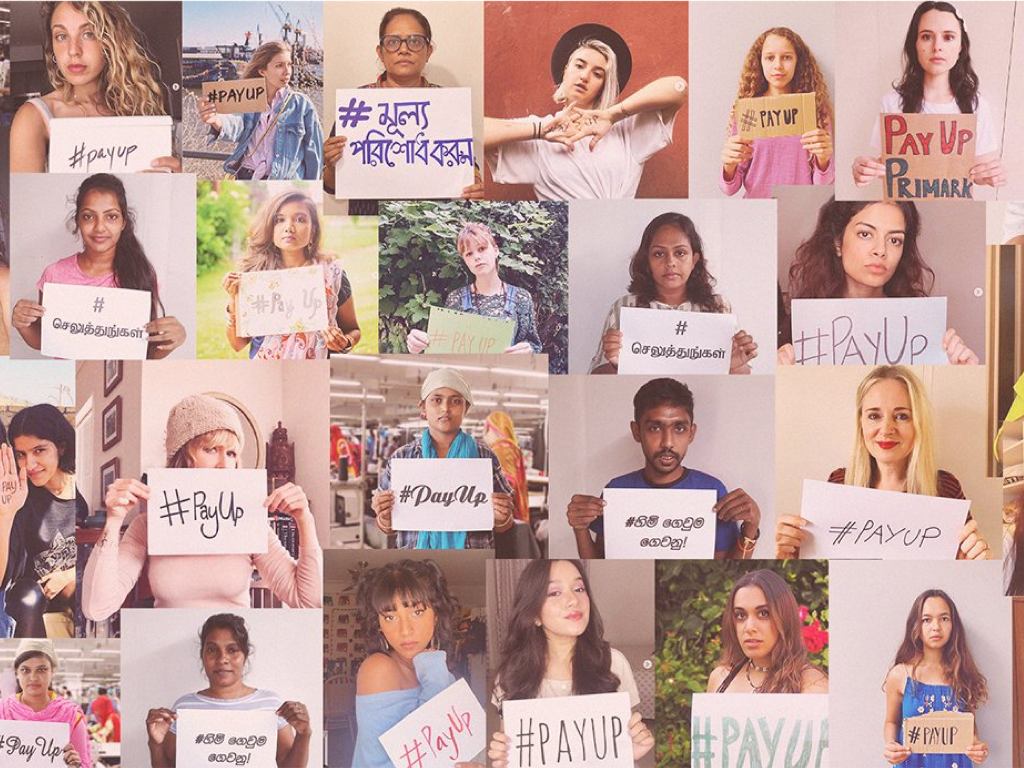 In the first months of 2020, as the knock-on effects of Covid-19 were catapulting the global fashion industry into free-fall, dozens of mass-market apparel brands made a catastrophic decision: They canceled an estimated $40 billion worth of apparel orders that, in many cases, were already in the works or had been completed and shipped.

In the current supply chain, factories front huge costs for fabric and wages, and only months later they are reimbursed by the brands. Thus, by canceling the orders, brands were refusing to compensate for countless hours of completed work. As a consequence, over a million garment workers — the majority of whom are women, many are single mothers — were immediately laid off or fired, many without pay, and plunged into a grave economic crisis with zero financial support. Canceled orders impacted almost all supplier countries, from Bangladesh to Myanmar to Cambodia, Vietnam, the U.S., and beyond, and triggered a corresponding increase in hunger and food insecurity, union-busting, and gender-based violence that is still unfolding, two years later.

The #PayUp campaign was formed as a direct result of the Cancellation Crisis.

In early March of 2020, news of the order cancellations started to spread in the media and worker rights groups and advocates started to organize a response, spearheaded by Remake. After hearing early complaints of order cancellations from suppliers to major fashion brands and retailers, the Worker Rights Consortium (WRC) and Mark Anner at the Center for Global Worker Rights at PennState (CGWR) began writing to garment factories and brands urging them to commit to orders during the pandemic and inquiring about their sourcing practices. They surveyed factories in Bangladesh about the impact of the cancellations, and on March 27, released a damning report that listed the initial list of brands that owed their workers and captured the devastation of that decision, including factories shuttering and workers losing their jobs without pay.

With the WRC and CGWR report and a culpable list of brands in hand, Remake posted a Change.org #PayUp petition on March 30. The press picked the story up, and the #PayUp campaign took off immediately. Within just a few days of campaigning, H&M was among the very first brands to #PayUp, committing to pay for $170 million worth of completed and in-process orders placed in Bangladesh alone by March 29. In addition, PVH (owners of Calvin Klein and Tommy Hilfiger), Kiabi, VF Corporation (owner of The North Face, Vans, and Timberland), Target, and  Zara-owner Inditex, which put on hold a staggering $109 million in Bangladesh, also reversed their decisions to cancel by April 12. These were the first six brands to fully commit to #PayUp,  as was confirmed by the WRC and CGWR brand tracker which launched a few days later.

Over the next few months, Remake worked closely alongside many other labor rights groups and NGOs around the world, including Awaj Foundation, Stand Up Lanka, Clean Clothes Campaign, Labour Behind the Label, Union for Concerned Researchers in Fashion, and Business & Human Rights Resource Centre—a coalition effort bolstered by the indispensable research and brand and supplier outreach of WRC and PennState researcher Mark Anner—to hold the brands accountable to their garment workers.

Over the summer of 2020, the #PayUp campaign went viral. Hundred of thousands of citizens around the world began using the #PayUp tag on social media. Remake’s Change.org petition leapt from 55,000 signatures in early June to more than 250,000 in mid-July with signatures rolling in well into the fall. As many as 46,000 people were viewing Remake’s social media posts about the campaign every day. News media, from Vogue and NPR to outlets in Russia, Vietnam, Italy and beyond covered the social-media-driven consumer-led campaign, which was referenced in more than 800 news stories in 2020.

Remake linked Kylie and Kendall Jenner’s clothing brand to a company called Global Brands Group that canceled orders in June of 2020. This connection was denied by the sisters and their brand name subsequently removed from the GBG website, but the uproar introduced a growing audience to the plight of garment workers impacted by the pandemic. GBG is among the companies that never agreed to #PayUp.

As a result of all of the pressure, more and more brands began to agree to pay for the orders they had placed before the pandemic began. Despite resisting calls to pay for orders in full early on, Levi’s and Gap Inc. agreed to #PayUp on July 7 and 10 respectively. Although some companies like adidas and Nike were never connected to order cancellations, they made public statements committing to their suppliers during the pandemic anyway and were added to the right side of the tracker as well.

Other brands took much longer, and capitulated only after months of campaigning by advocates around the world. Primark, and its owner Associated British Foods, which originally owed more than half a billion dollars, agreed to #PayUp in September of 2020. Likewise, C&A, which owed $1.5 billion despite being owned by the billionaire Brenninkmeijer family, took almost seven months to #PayUp. A forthcoming WRC and CGWR reveals that the money from Primark and C&A was paid back so late that it did not reverse the harm done to factories and garment workers. Likewise, as the pandemic wore on, more brands were added to the negative side of the tracker, including American Eagle Outfitters, URBN and TJX (the company that owns TJMaxx and Marshalls) for canceling orders or demanding discounts.

In the two years since #PayUp started, it has helped to recoup approximately $22 billion in money owed to garment factories and workers from 25 major clothing brands and grown into a global movement for brand accountability. 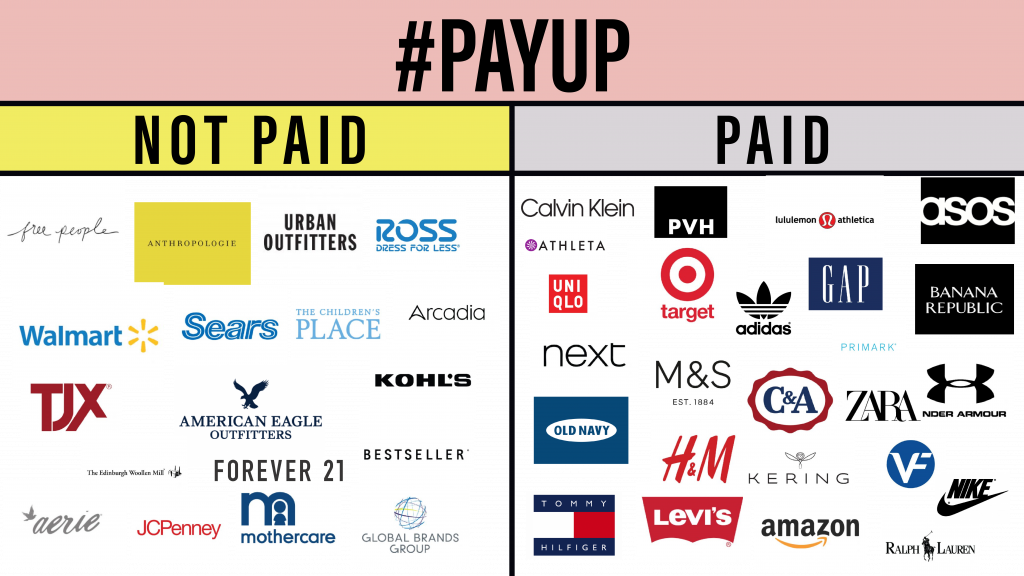 The impact of the #PayUp campaign has been felt around the world, changing the way labor rights campaigns are organized and sparing jobs and livelihoods in the midst of the pandemic. “The #PayUp campaign made people realize the issues and helped to get workers emergency relief so their families could survive,” says Nazma Akter of Awaj Foundation. Without the power of the #PayUp campaign, it’s estimated that millions of workers would have lost their jobs at the start of the pandemic. According to a forthcoming report by the WRC and CGWR, the reinstated orders likely resulted in hundreds of millions of dollars reaching garment workers who otherwise would not have been paid.

As Scott Nova, Executive Director of the Workers Rights Consortium told Atmos magazine: “There’s no question that the campaign has, at least for now, averted millions of lost jobs in the industry and hundreds of millions of dollars in wages for workers… And in terms of its direct financial impact on workers, it’s probably the most successful campaign on worker rights in the apparel supply chain ever.”

Together, the campaign strove to become a resource for consumers wishing to learn more about who makes their clothes and where, and pushed the narrative that #PayUp is, at its core, a fight for basic human rights and economic justice. (See the full list of committed brands here.)

But the fight is far from over. Despite returning to profit by 2021, many brands are still refusing to #PayUp.

#PayUp undoubtedly spared jobs and protected garment workers’ incomes as the pandemic unfurled. And with a $22 billion victory under our belt, it also sparked a global movement for greater brand accountability, including fighting behind changing laws, introducing new regulations and binding agreements on brands.

On September 21, Remake unveiled our 7 Actions, a roadmap towards systemic reform to ensure that brands are held accountable and workers are fairly paid well into the future that was developed with the input of union leaders and labor rights advocates. The actions are as follows: 1) Pay Up. 2) Keep Workers Safe. 3) Go Transparent. 4) Give Workers Center Stage. 5) Sign Enforceable Contracts. 6) End Starvation Wages. 7) Help Pass Laws. You can read the rationale behind them in detail here. To date, we have more than 25 partners who’ve signed on in support of the 7 Actions.

The coalition behind #PayUp wasted no time enacting the 7 Actions. In line with Action 5, in the spring and summer of 2021, Remake fought with other labor advocates  behind the extension and expansion of the International Accord on Fire and Building Safety, which obligates brands to make binding commitments to workplace safety in Bangladesh and one other garment-producing country. On August 25, 2021, the International Accord was renewed and expanded and to date more than 160 brands have joined the new agreement.

On September 27, 2021, Remake supported the California Garment Worker Center and helped secure a foundation-shaking victory when California Governor Newsom signed in a new law, SB62 The Garment Worker Protection Act, which expands liability so that fashion brands operating in California will no longer be able to side-step responsibility for rampant wage theft within their own supply chains, advancing Action 6 and 7.

In an official statement, Newsom said: “California is holding corporations accountable and recognizing the dignity and humanity of our workers, who have helped build the fifth-largest economy in the world. These measures protect marginalized low-wage workers, many of whom are women of color and immigrants, ensuring they are paid what they are due and improving workplace conditions.”

Next, the #PayUp coalition is looking to expand brand accountability through policies on the federal level and internationally. 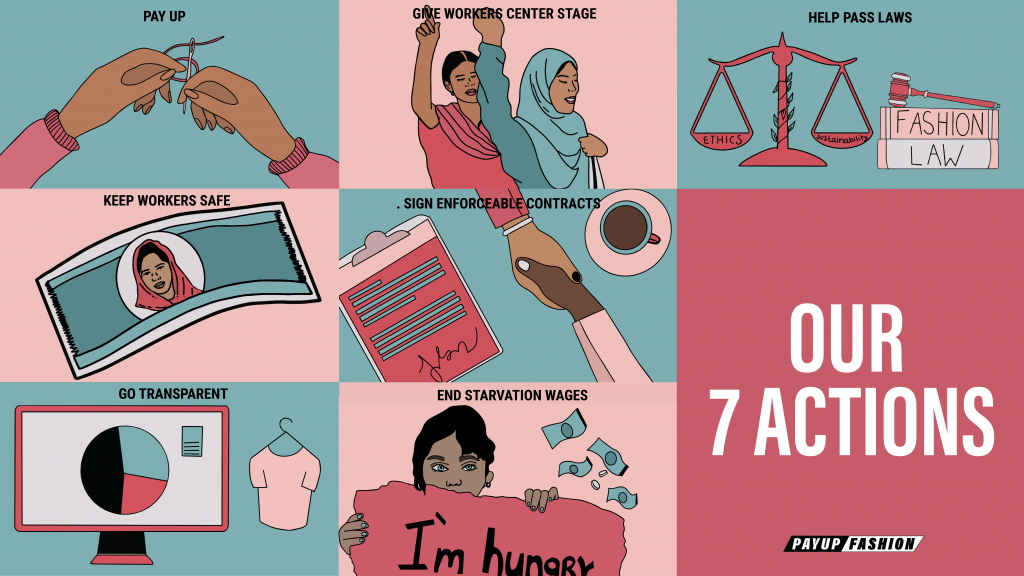 And this work of holding fashion brands accountable and fighting for fair pay in fashion is just getting started. As Akter of the AWAJ Foundation summarizes: “We will continue to hold brands accountable. We will continue with the campaign, empowering workers, [and ending] harassment and abuse in the workplace. We will [ask them to] increase the prices that directly impact workers’ livelihood. We are pushing, always. We are continuing our fight. That is our journey.”

Heather Snowden is a British fashion writer based in Berlin.