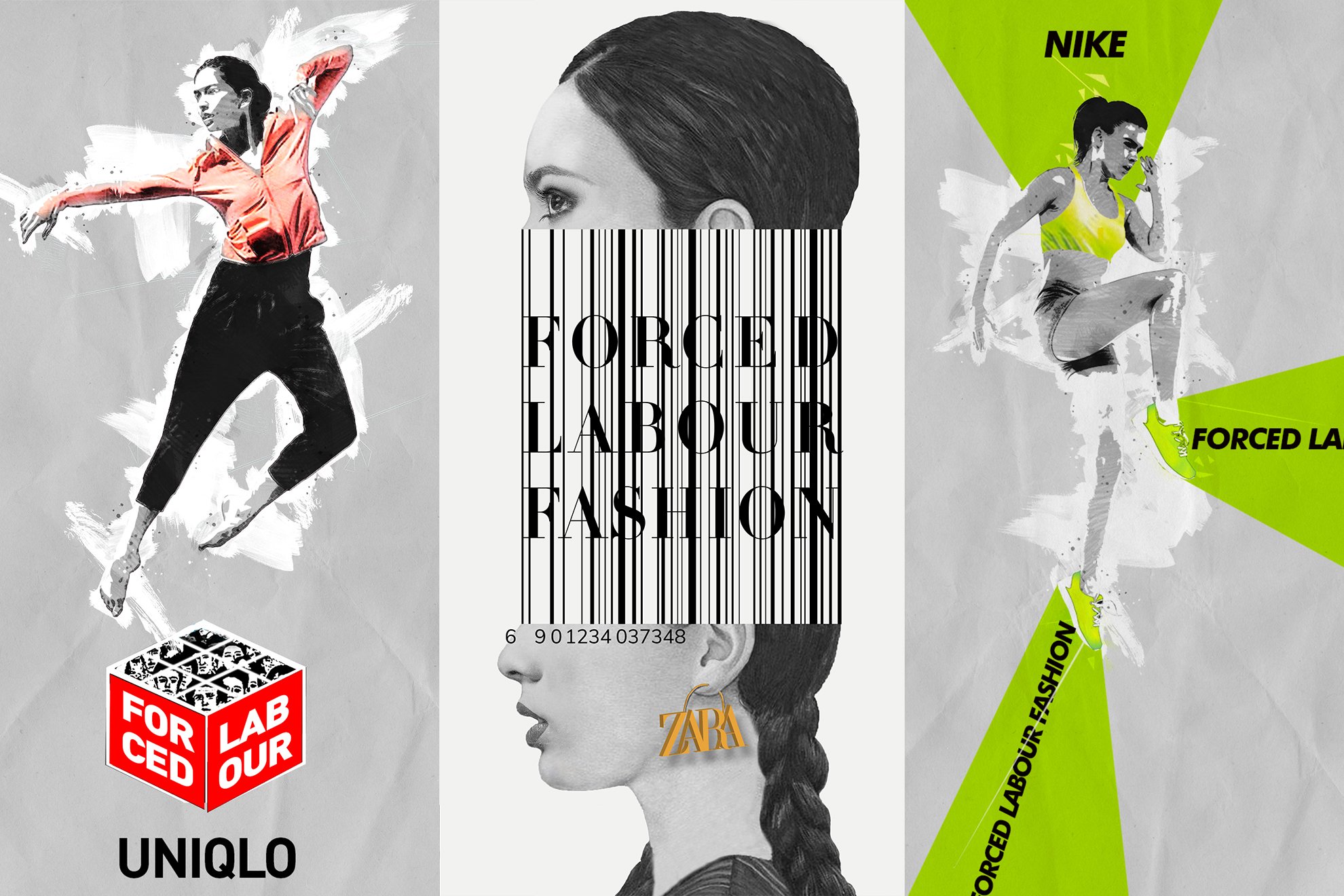 Uyghur forced labor remains one of today’s largest humanitarian crises, and the fashion industry is intricately tied to its horrors. In December 2020, the Center for Global Policy issued a report on the extent of paramilitary control of the Xinjiang cotton-picking industry, and the direct beneficiary relationship between the industry and the Chinese government’s forced labor transfer scheme.

Cotton picking in China primarily takes place in the country’s Xinjiang region. For decades prior, cotton picking has been a migrant-dominated industry with the Han populations comprising most of the workforce. But in recent years, it has come to public attention that the Chinese government has implemented a coercive labor transfer scheme to substitute the Han cotton pickers with the country’s Uyghurs, a Turkic ethnic minority of China who have been forced into “reeducation camps” — de facto ethnic cleansing efforts on the part of the Chinese state.

The coercive labor transfer serves to drive down costs in a labor-intensive industry, where a significant amount of picking is still done by hand. As a part of this scheme, Uyghur workers have been moved out of “reeducation” camps into the cotton-picking industry which is controlled by the Xinjiang Production and Construction Corps (XPCC), a paramilitary organization overseeing cotton production in the region. The Xinjiang province provides around 85% of Chinese cotton, more than a majority of the country’s cotton supply. China, in turn, accounts for nearly 22% of the world’s cotton supply. It’s an undeniably huge global player — both in terms of supply and demand.

Supply-side: The lack of transparency in fast fashion Supply Chains

At a general level, brands in the apparel space often operate on a model of indirect sourcing by which a brand enters into a contract with a factory that then uses the money received to subcontract to a smaller factory for much cheaper and therefore make money off that interaction as a third party. Subcontracting implies that the export volume and supply orders are attributed to the original factory. However, because brands often retain the contractual right to pull out of supply orders, there is a loss of long-term security to subcontractors, meaning that rather than investing in infrastructure and improvements, factories must instead operate on short-term contracts and so reinvest into the subcontracting model. Additionally, given that the fast fashion business model is one that is ruled by trends, brands require shorter production times and larger volumes of inventory, strengthening the convenience of operating on short-term contracts.

According to the International Labor Rights Forum: “The consequences of these increasingly precarious employment arrangements is a weakening of workers’ bargaining power. Exacerbating the problem is the lack of supply chain transparency that has enabled multinational companies to distance themselves from their responsibility for the risks and poor conditions for workers in the factories where their products are made. Given that the globalization of production involves multiple layers of sourcing, all too often companies will attempt to claim that off-shored or contracted jobs no longer fall under their responsibility, but are rather the concern of a different employer.”

This is the current baseline of fast fashion production. It’s an industry rife with issues of supply chain transparency. In relation to the Xinjiang cotton industry, these pre-existing problems are exacerbated dramatically. Workers don’t just have weakened bargaining power, they have no bargaining power. This causes the costs of production to be unethically low, allowing brands to consistently put profit over people while engaging in sourcing from Xinjiang.

Chinese cotton has been in high demand — both for its quality and its price — for a large number of fast fashion brands. ABC reports on the product descriptions found on the websites of brands like MUJI and Uniqlo: “Made of organic cotton delicately and wholly handpicked in Xinjiang, the men’s Oxford Shirts of MUJI are soft and breathable with a clean design” and “Made from Xinjiang Cotton, famous for its superb quality.”

This is not an isolated instance. 2020 NBC reporting revealed that Xinjiang cotton sourcing can be traced to Lu Thai Textiles, a Chinese garment manufacturing company that up until at least 2019 has had contracts with Hugo Boss, L.L. Bean, Brooks Brothers, Esprit, and Uniqlo. The news outlet’s interview with the Executive Director of the Worker Rights Consortium, Scott Nova, explicitly noted the accountability of fast fashion brands regarding the issue of Uyghur forced labor, saying: “About one in five garments flowing into the U.S. contains Xinjiang cotton. It would be a challenge to identify any major apparel brand or retailer whose supply chain doesn’t run through Xinjiang.”

1) Brands can enter into contracts with clothing factories or other cotton-based manufacturing sites located directly in Uyghur regions of Xinjiang. According to a 2020 memo issued by the US State Department, a relatively reliable indicator of forced labor is the location of the manufacturing site at or near Uyghur populous area. The memo specifically outlines sites that are: “operating in Xinjiang located within the confines of the internment camps, near internment camps, or within the confines of or adjacent to industrial parks” as likely: “involved in poverty alleviation efforts.” — i.e: forced labor.

2) Brands can also maintain relationships with companies that source from Xinjiang province as an indirect form of using forced labor. This indirect relationship generally comprises brands contracting to companies that are subsidized by the Chinese government or outsource their hiring to the Chinese government. The US State Department says: “Companies operating in Xinjiang receiving government development assistance as part of the government’s poverty alleviation efforts or vocational training programs; companies involved in the mutual pairing assistance program” are the primary perpetrators of forced labor programs. Indirect involvement in forced labor also includes internationally subcontracted companies that use cotton from the Xinjiang province. The International Cotton Advisory  Committee in Washington D.C reports that “China exports unprocessed cotton to 14 countries, including Vietnam, Thailand, India, Pakistan and Bangladesh, and yarn to 190 countries.” The use of Xinjiang cotton is overwhelming and overarching.

3) Brands may also engage with companies that themselves lack transparency — companies that set up shell companies to avoid being traced back to Xinjiang forced labor. These brands, according to the US State Department: “hide the origin of their goods, write contracts with opaque terms, and conduct financial transactions in such a way that it is difficult to determine where the goods were produced, or by whom.”

This is a threefold issue of sourcing, manufacturing, and transparency.

Brand Accountability in a Global Economy

In the wake of a 2020 public outcry, pressure mounted on brands to engage in private measures to remove themselves from unethical supply chains — a reasonable demand given the short-term nature of their contracts. Multiple fast fashion brands issued statements regarding their sourcing methods and traceability. The following table outlines some of their responses:

While brands have for the most part disassociated themselves from specific factories and cotton farms named for participating in Uyghur forced labor, most of them have not acknowledged the level of indirect participation that pervades their supply chains. Some brands (notably Forever21, FILA) have not even responded to the implications of using Uyghur forced labor.

To date, the brands who have issued statements have faced immediate backlash from the Chinese government, threatening their ability to sell in the Chinese market, which in turn comprises a significant amount of fast fashion revenue. In March 2021 BBC reported that the Chinese government launched a targeted public boycott campaign of Nike and H&M for their comments about Uyghur forced labor. The Chinese government, which controls the Chinese internet, has removed H&M from its e-commerce servers and has mobilized the country’s celebrities to urge a boycott of the brand. According to BBC reports: “While H&M’s physical stores in China remain, it is no longer possible to hail a taxi to the shops using an app and consumers can’t shop online.” China has also expanded its public campaign against brands to include Adidas and Burberry.

Facing global pressure, both from the Chinese and the US government, brands are caught in a stalemate. On one hand, they could stand by their disavowal from Xinjiang Cotton and lose their Chinese market base, or they could choose not to respond to the issue of forced labor, thus explicitly committing to unethical labor practices and consequently face bans from conducting business in US and European markets.

Some brands have given into this pressure. Inditex, Zara’s parent company, PVH, owner of brands like Tommy Hilfiger and Calvin Klein, and H&M have all taken down their previously issued statements.

As of March 25, 2021, Fortune Magazine reports that: “H&M appears to have removed the offending statement from its website but published a new statement on the brand’s Chinese website, saying its actions on Xinjiang are apolitical and that the company ‘respects Chinese consumers as always.’” H&M also published a formal response to the backlash it received in the Chinese market in their first quarter 2021 earnings report. The New York Times reported on March 31, 2021, that the report included: “no explicit references to cotton, Xinjiang or forced labor. However, the statement said that H&M wanted to be ‘a responsible buyer, in China and elsewhere’ and was ‘actively working on next steps with regards to material sourcing.’” The noncommittal language was echoed by CEO Helena Helmerrson who expressed H&M’s “long-term commitment to the country,” saying in the earnings conference call: “We are working together with our colleagues in China to do everything we can to manage the current challenges and find a way forward,”.

Although H&M has seen the most amount of backlash from Chinese media, the brand’s dilution of its previously strongly-worded statement does call into question the legitimacy of their commitment to supply chain transparency. Their disavowal seems to be following the standard strategy for brands in the aftermath of a public relations crisis — issuing statements expressing intention of implementing private audits to re-evaluate supply chains, but not actually pulling out of the system of concern. It’s a type of greenwashing presented time and time over; fast fashion brands have indeed become notorious for reacting rather than reforming. And given the reputation-sensitive nature of the fashion industry, the need for immediate re-action brands feel is necessary, at the expense of any credible action.

Lip service is not enough.

H&M does not have the standing to claim apolitical action when their mode of production fuels forced labor — a deeply political issue. Brands like H&M cannot be expected to be treated as apolitical when they actively take advantage of weak labor regulations and state-endorsed coercive labor schemes overseas to lower their costs of production. One breath cannot condemn forced labor, while the other breathes life into it.