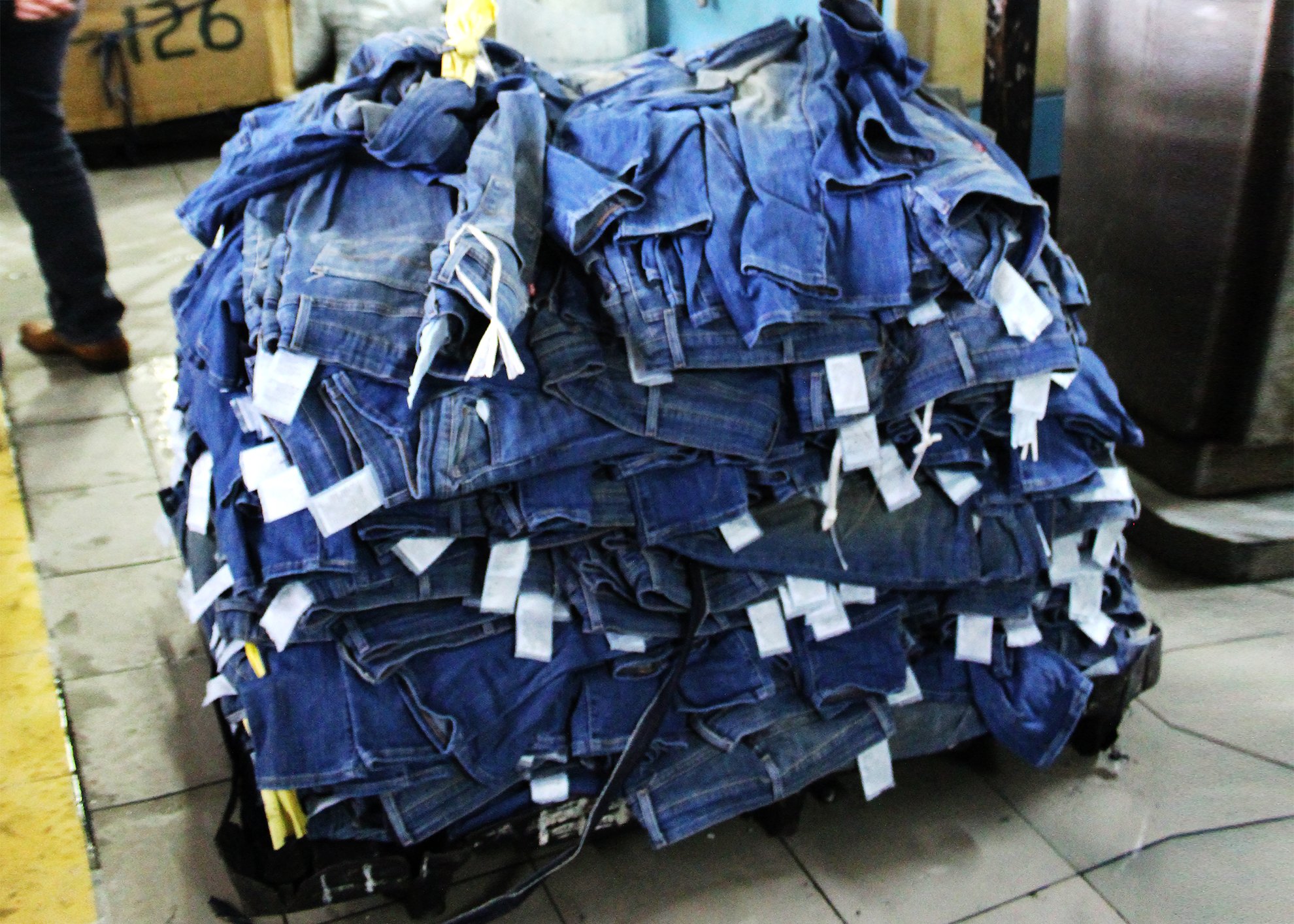 According to Business Insider, clothing production has roughly doubled in the last 20 years. In visual terms, the World Economic Forum reports that fast fashion’s production cycle is “the equivalent of one garbage truck full of clothes [being] burned or dumped in a landfill every second.” The fast fashion industry has become notorious for its environmentally negligent practices. From dumping acidic waste into drinking water to increasing textile waste across the production pipeline, environmental standards are often completely disregarded and directly result in increased carbon emissions, water waste, and overall environmental pollution. So why aren’t we talking more about degrowth in fashion when assessing brands for their sustainability efforts?

One of the biggest contributing factors of the fashion industry’s sustained environmental negligence is the ever-shortening lifecycle of clothing. With trend cycles in constant motion, the inventory turnover is incredibly high for most fashion brands. On average, people upped their apparel purchases by 60% from 2000 to 2014, and considering that 85% of those textiles end up in landfills every year, it’s highly likely consumption will continue going through the roof, with brands producing in excess to support it.

Simply put: brands are producing too much product.

Although in recent years there have been industry pushes towards expanded sustainability models, retroactive efforts of donating to environmental charities and funds are not enough if apparel brands do not address the fundamental issues within their production process. Simply put: brands are producing too much product.

Why Both Fast Fashion and Luxury Brands Overproduce

Overproduction is the direct result of a production process driven by short-term trend cycles and labour contracts. Because trends are so central to the inventory composition of fashion and apparel brands, fast fashion brands specifically contract out designs to manufacturers for short-frame production — meaning that the order is completed, shipped, and received all within a maximum of weeks, as opposed to generally seasonal production cycles. A 2011 study published in the International Journal of e-Education, e-Business, e-Management, and e-Learning (IJEEEE) found:“[While] a typical clothing company manufacturing in Asia could take six to nine months to get a new design into the shops…an entirely new Zara garment takes about five weeks from design to delivery, while a new version of an existing model can be in the shops within two weeks. In a typical year, Zara launches some 11,000 new items, compared with the 2,000-4,000 from companies like H&M or Gap.” Although from a material, business-oriented lens, this production process seems streamlined and efficiency driven, it directly translates to year-round short-term production marked by unethical and unsustainable practices to achieve the production targets placed by fast fashion brands.

An entirely new Zara garment takes about five weeks from design to delivery, while a new version of an existing model can be in the shops within two weeks.

The supply model of trend-based overproduction means that brands increasingly enter into short-term contracts with manufacturers. As the pressure to produce in mass exceeds manufacturer capacity, manufacturers resort to subcontracting. Workers within this system have low job security on top of the meager wages they are being compensated with. An International Labour Organization (ILO) report in 2018 found that garment workers in fast fashion manufacturing sites were routinely abused for taking breaks during their day. If they failed to meet production targets, they faced the possibility of being physically beaten, sexually harassed, and violently threatened.

In fact, these production targets are themselves a gross overestimation of demand. Business of Fashion reports that “to ensure a certain level of size flexibility, retailers often slightly overbuy.” This turns out to be a considerable problem given that since 2009, the fashion industry has hit a high in inventory-to-sales ratios. The remaining unsold inventory is noted as “dead inventory” that  brands notoriously find harmful ways to dispose of. In an interview with Vox, fashion and textile researcher, Timo Rissanen noted: “Burning and shredding are the main [ways to dispose of unsold clothes]. The third option is simply landfilling, but most companies do incineration so that they can claim the incinerators capture the energy.” In 2018 alone, H&M destroyed approximately $4.3 billion worth of unsold clothing. It was later estimated in Vox reporting that since 2013, “H&M had burned 60 tons of new and unsold clothes” — a process which contributes to increased carbon emissions and may even be responsible for the release of plastic microfibers into the atmosphere if clothing is synthetic fiber-based.

In 2018 alone, H&M destroyed approximately $4.3 billion worth of unsold clothing. It was later estimated in Vox reporting that since 2013, “H&M had burned 60 tons of new and unsold clothes.”

The added distance between brands and production cycles serves as a deliberate move on the part of the fashion industry to take the onus off of themselves for ethical and environmental transgressions committed by a supply chain entrenched in exploitation.

For fast fashion brands, this is a model exacerbating twin issues: unethical labour practices and unsustainable environmental negligence. Taking advantage of both has allowed the fast fashion industry to produce cheap and fast in what is essentially a race to the bottom.

But it’s not just fast fashion participating in overproduction.

To give themselves flexibility and mitigate consumer preference, luxury brands place seasonal high volume orders in different designs. Whichever products remained unsold are then burned off to keep them from being sold under-value in counterfeit marketplaces and unofficial distribution platforms, thereby retaining brands’ exclusivity.

The model of overproduction extends into the luxury space as well. While fast fashion’s overproduction is based on catering to consumer trends, luxury fashion brands participate in overproduction to set consumer trends. To give themselves flexibility and mitigate consumer preference, luxury brands place seasonal high volume orders in different designs. Whichever products remained unsold are then burned off to keep them from being sold under-value in counterfeit marketplaces and unofficial distribution platforms, thereby retaining brands’ exclusivity. In 2018, Burberry came under fire for reportedly burning $26.8 million of its own inventory the previous year. Although Burberry has since committed to a policy of not destroying product, it has sparked a conversation around the way in which brands and consumers think about clothing has become short-sighted and the ways in which our relationship to fashion needs to change.

How Degrowth Could Be Implemented

Grassroots solutions have been centered around sustainable strategies of degrowth, a planned reduction of product volume and slowed consumption of clothing. As an abstract, degrowth might seem like an enormous shift in business strategy, and indeed, consumer mindset. But with the advent of AI technology, degrowth can be applied to trend analysis techniques as a part of a larger platform of economic sustainability and green supply chain management.

For brands, this means implementing AI methods in the design and manufacturing steps of production in order to target the issue of overproduction. AI research has led to the discussion and development of automatic forecasting models that analyze mid-term sales using neural networks to analyze historical trend cycles and forecast future trends. The result is a software that accurately models demand for apparel products with relatively low demand uncertainty. In the luxury space, Heuritech has already made a name for itself as a sustainable software solution to the problem of fashion overproduction. Its partnership with LVMH brands, Jimmy Choo, and Adidas, shows potential for a larger industry shift towards degrowth as a sustainable solution. By producing strictly in accordance to predicted demand, overproduction can become obsolete. Degrowth strategies and technological solutions curb carbon emissions, water wastage, and environmental mismanagement within the production process itself.

For consumers, degrowth focuses on extending clothing lifecycles. Decreasing clothing waste and slowing down consumption, by participating in a second-hand consumption economy, serves to stimulate the shift towards the green economy — one that prioritizes the resources of production (i.e: labour and the environment) rather than exploits them. Advocacy campaigns like Remake’s own #NoNewClothes pledge are part of this introspection of consumption patterns aiming to normalize degrowth as a consumer-endorsed business solution. In 2020, over 1,000 individuals took the 3-month #nonewclothes challenge, resulting in over 16 million gallons of water being preserved, 6 million pounds of CO2 emissions being saved, and 23,000 pounds of waste being prevented.

Decreasing clothing waste and slowing down consumption, by participating in a second-hand consumption economy, serves to stimulate the shift towards the green economy — one that prioritizes the resources of production (i.e: labour and the environment) rather than exploits them.

Degrowth is a critical aspect of sustainability and necessary to address both the environmental and ethical transgressions rooted within the production process of the fashion industry. It presents a purposeful shift to conscious supply and demand. Despite its potential for environmental and supply chain success, there are many critics who bring up the concern of job loss. These critics’ main argument being: reduced production means reduced employment for garment workers. However, he reality of degrowth is a bit more developed than its critics claim. Producing lower volumes at slower time frames would shift cycles back to seasonal production and encourage brands to return to signing enforceable long-term contracts with manufacturers, rather than rely on an exploitative series of high volume short-term contracts. Degrowth offers the potential for increased job security for garment workers, along with the possibility of higher quality jobs. If volume orders are lower, production targets lower as well — namely to levels that are achievable and within the bounds of standard labour laws.

Change Your Relationship to Fashion: take the #NoNewClothes pledge