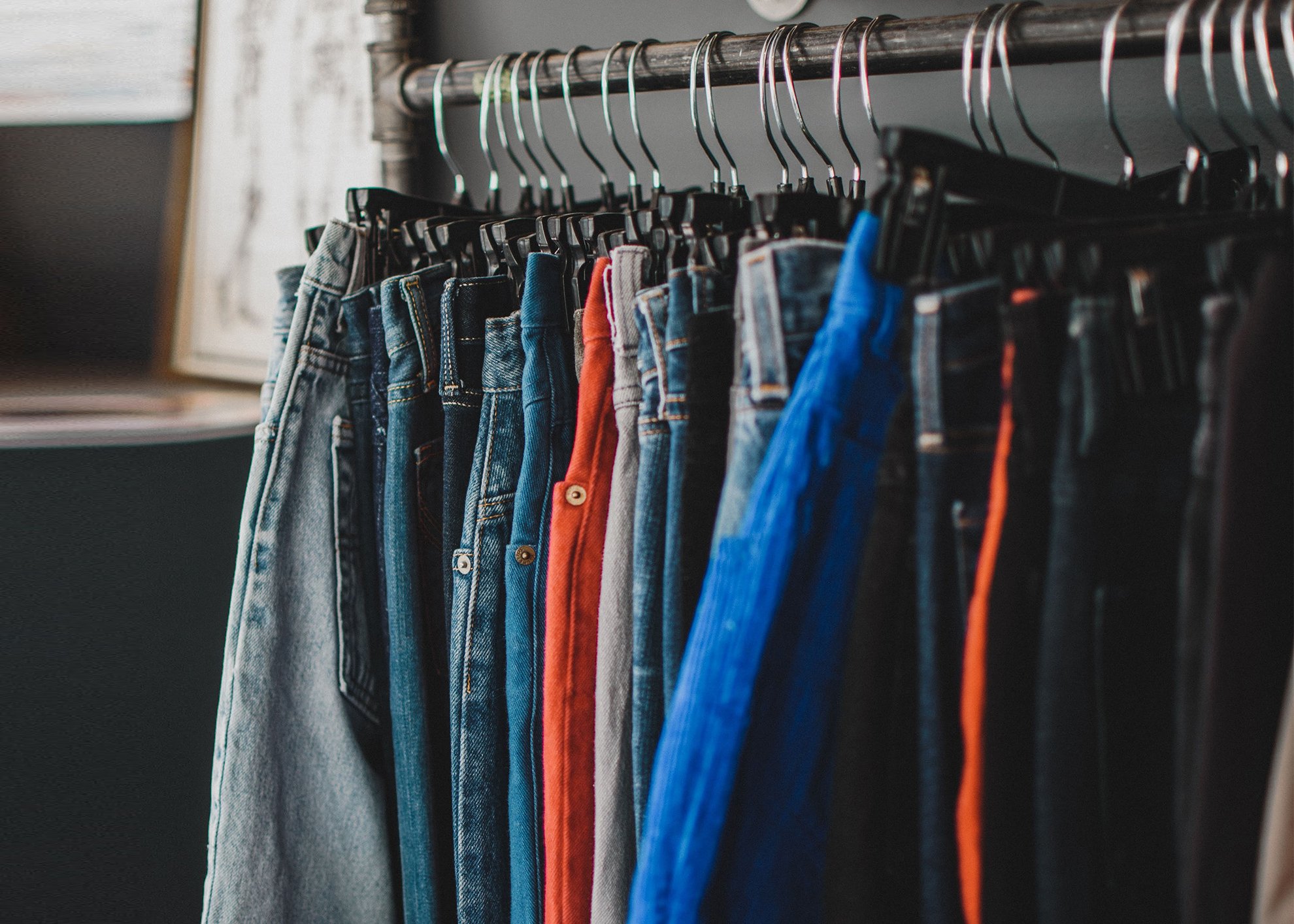 In May, NPR helped Goodwill spread an important message: stop donating trash. The timing of this request wasn’t random — with much of the general public holed up at home during the pandemic, it seemed that households suddenly became aware of the excess items they had amassed over the years as it began to cramp people’s style and their shelter-in-place abodes. Quarantine cleaning sprees led to boxes and garbage bags stuffed with clothes, home goods, and old linens showing up on Goodwill’s doorstep. So what ends up happening to the clothing Goodwill can’t resell?

Unfortunately for Goodwill, Salvation Army, and all the other thrift and charity shops around the U.S., not all those bags, boxes, and bins of donations that came in during the pandemic were filled with useful items. In fact, many items were, quite simply, trash — and workers at these stores were left with the task of sifting through it all, separating that which can be resold from that which can’t, and ultimately, having to offload the latter from their stores.

When You Donate Trash, It Ends Up Costing Goodwill

Goodwill and other stores don’t want trash, but they still get piles of it. They also receive items that might start out on the sales floor, but ultimately not be purchased because of their worn condition. So where do those unwanted and unsellable items end up if not in the hands of new buyers?

Goodwill explains that when textile items don’t sell at the outlet, they are recycled and given another life in some form. The nonprofit’s website details that they have seen that “textile recyclers divert about 2.5 billion pounds of used clothes from landfills.” However, for those items that don’t get diverted, they get tossed into trash bins. Ultimately, this becomes a problem for not only the environment, but for Goodwill as well, as their trash bill increases.

This is a problem for Goodwill. NPR interviewed Heather Steeves, who is a spokesperson on behalf of Goodwill stores in Vermont and New Hampshire. Steeves explained that donated trash leaves Goodwill with a heavy financial burden. “All this trash adds up to more than $1 million a year in a trash bill, and it’s been growing every year for the past five years,” Steeves told NPR. This figure only accounts for 30 stores in two states. The actual bill for donated garbage across the country is likely mind-boggling.

Another option for clothing that can’t be resold in-stores is sending it abroad. A common myth is that organizations or charities that send clothing overseas to third-world countries are doing so as a charitable contribution. Unfortunately, sending our used clothing to another country isn’t always the most charitable of deeds, as it can inflict damage on the receiving country’s local economy.

The BBC tackled this topic in a story that explored the second-hand garment trade. The largest exporter of that trade? Unfortunately, the United States holds the top spot. According to data from the United Nations Comtrade Database (posted by the BBC), the U.S. exports $687 million of used clothing to other countries and more than $100 million of those frocks end up in Canada. However, the Global South may see the majority of the pile of our unwanted clothes. Figures from the U.N. database show that more than $300 million worth of secondhand clothing heads to countries including Chile, Guatemala, India, the United Arab Emirates, Mexico, Tanzania, Honduras, Angola and the Dominican Republic. An additional $275 million ends up elsewhere.

When our used clothes get sent abroad, their sales compete with other local merchants and textile industries in the area. This competition can put financial pressure on those who may already be struggling to make a profit.

Dr. Andrew Brook and his book, Clothing Poverty, explains that while many believe their clothing will go to charity, much of it actually gets sent overseas. The clothes then become part of the second-hand garment trade, which is a business — not a charity. While the BBC’s story focuses on the U.K., the U.S. has made the largest contribution to this global economy.

So why is this a problem? When our used clothes get sent abroad, their sales compete with other local merchants and textile industries in the area. This competition can put financial pressure on those who may already be struggling to make a profit. Brooks noted to the BBC that when it comes to this, sub-saharan Africa is most affected.

MERS Goodwill (out of the St. Louis region) explains on its website that individuals looking to donate their clothing should research where they are donating, especially when dropping clothes into curbside donation bins. While some of those bins are operated by respectable charities, others might not be what they seem and could be selling those clothes to third-world countries from the get-go.

MERS notes that “…used clothing operations like this put many people in the [Global South] out of work. Sometimes it’s right to send specific kinds of clothing donations to meet a shortage, but dumping random piles of cheap, miscellaneous old clothes can destroy the local economy and create even more poverty. One example is the African country of Kenya, whose clothing industry couldn’t compete with the mounds of discarded Western clothing.”

This second-hand clothing trade was so economically destructive that, according to the film Textile Mountain, Kenya’s textile industry employment plummeted from half a million workers to fewer than 20,000 in a few decades.

Fast Fashion Tends to Have the Most Hazardous Impact

As is common knowledge, fast fashion is cheap and not made to last. It is the plastic straw of the garment industry, and an equally frustrating problem for the resale industry. A headline in the U.K.’s Daily Mail sums it up concisely: “Shocking report reveals today’s cheap clothes are so badly made they often can’t be resold — and end up rotting into a toxic soup in Africa.”

Today’s cheap clothes are so badly made they often can’t be resold — and end up rotting into a toxic soup in Africa.

The Daily-Mail details a 30-foot textile mountain in Accra (Ghana’s capital); the labels littered in the gigantic frock heap bear names of fast fashion brands like H&M and M&S. Instead of being resold or repurposed, these garments often end up wasting away in landfills, leading to an ever-growing problem.

According to the Daily-Mail, 40 percent of the secondhand clothes in one of Ghana’s main markets ends up as waste, with more than 110,000 pounds of clothing becoming trash every day. The clothing simply cannot be sold, and as a result, cheaply made clothing can end up on beaches, and, like those plastic straws, can pollute the sea, too.

While the clothes will break down eventually, their disintegration eventually leads to ‘…a poisonous clothing soup which spews toxins into the environment as the fibres break down.’

While the clothes will break down eventually, their disintegration eventually leads to “…a poisonous clothing soup which spews toxins into the environment as the fibres break down.”

If you plan to make donations to Goodwill or any charity or thrift store, please be mindful of the items you donate. Trash is trash. If an item is broken, badly damaged or just plain yucky, see if it can be recycled. Have a stained t-shirt? Own a lot of fast fashion pieces? Think twice about donating these items. Instead, turn clothing that could end up in a landfill into a cleaning cloth or something useful.

Unfortunately, some items will be destined for the trash. Do Goodwill and other thrift stores a favor, though, and place it on your curb for pickup instead of in their bins. Charities don’t exist to pay for our trash.

Goodwill and other charities want items that can be resold and reused. However, we can all do our part to make the worker’s jobs a bit easier and ensure that clean and useful items end up on the floor of these stores. Keep these tips in mind when making your donation piles:

However, before you start tossing everything you don’t want into bags to drop off at Goodwill or into donation bins, please be mindful of what you are donating. Not all discarded items are treasures people want, and some of those items aren’t even accepted as a donation. Goodwill and other thrift stores often have guidelines as to what they will and will not accept. And we all need to abide by donation etiquette, too. After all, even if Goodwill and charity shops accept something, we should do our best to ensure that items are clean and in working order.

If you’re thinking about doing some serious summer cleaning, Goodwill asks that you please don’t donate broken or dirty (aka ‘soiled’) items or any item that has been subject to a recall, has been banned or simply doesn’t meet safety standards. Not sure about those safety standards? Goodwill’s website recommends visiting the Consumer Product Safety Commission for more information. Goodwill also provides an entire list of items stores cannot accept.

Stay in the know — subscribe to our monthly newsletter