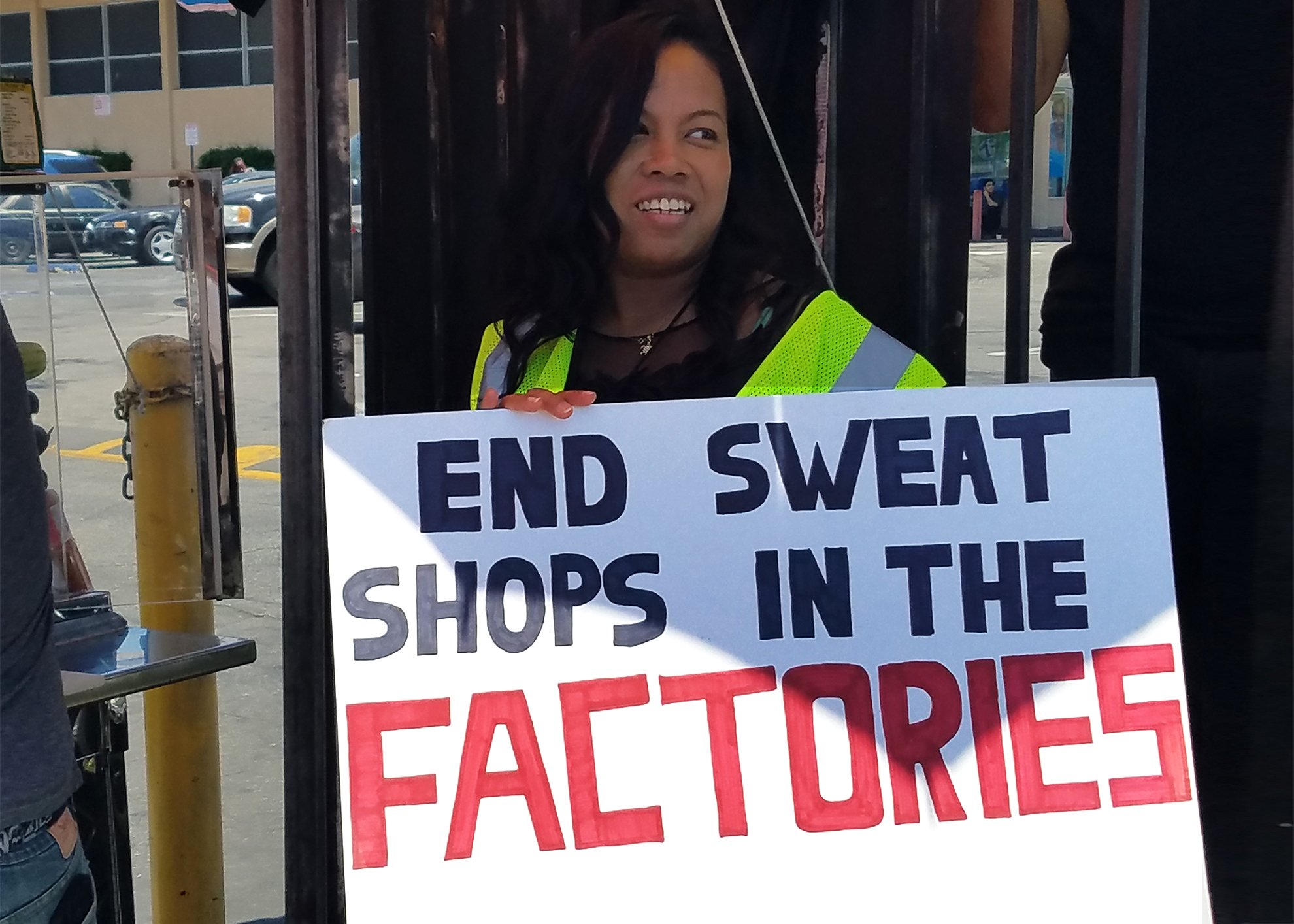 Usha, a 31-year-old garment worker at an H&M supplier factory in Bengaluru, India,  was one month pregnant when her factory closed during the lockdown in March 2020.  Despite having worked as a tailor in the garment industry for 10 years, she only has 40 USD as savings to meet the needs of a family of four. The factory at which she worked, and the brand for which she labored, did nothing for her — rather, they left her to starve, despite her having worked for them for years. The doctor told Usha she needed to relax more, but she said, “How can you relax when you don’t know where your next meal will come from?”

The garment industry has created approximately 60 million jobs globally,  with the majority of the work concentrated in Asia. However, it has not generated decent quality employment for the majority of its workforce. For decades, the basic labor and human rights of garment workers have been ignored by global apparel brands. The lack of regulations in the garment industry has led to insecure employment, nonexistent union rights, and weak enforcement organizations, and perhaps most devastatingly, wage theft for garment workers everywhere.

Wage theft is the failure to pay workers the full wages or employee benefits to which they are legally entitled. Minimum wages in most production countries are set at extremely low levels that rarely cover the workers’ costs of living, and to worsen matters, garment workers are often the victim of a system that uses subcontracting to avoid even earning a minimum wage.

Garment workers are often the victim of a system that uses subcontracting to avoid even earning a minimum wage.

Asymmetrical power relations between brands, suppliers, and workers form the basis of wage theft, and lack of regulation continues to perpetuate it. Apparel brands present themselves as ‘buyers’ of garments made by Asian countries. However, the contracts signed between brands and local suppliers clearly mention quality standards of products and tight delivery schedules, which inevitably perpetuate a system of wage theft by applying pressure on workers to produce more in less time.

The recent Covid-19 pandemic has only further aggravated the conditions of workers and the extent of wage theft occurring in the garment industry.  Asia Floor Wage Alliance interviewed 2,185 garment workers across 189 factories  in 6 countries — Sri Lanka, Pakistan, Indonesia, India, Cambodia, and Bangladesh — where 15 major brands source their garments, to study the impact of Covid-19 pandemic on wage theft.  A worker from a Primark supplier factory shared their horrifying experience of returning to work after an initial lockdown:

“When the factory reopened in June, there was a huge increase in verbal harassment, including name-calling, slut-shaming and constant threats of termination. If we wanted to take even a one-day leave due to any illness, they would shout at us and tell us to just resign and never return to work.”

“There was a huge increase in verbal harassment, including name-calling, slut-shaming and constant threats of termination. If we wanted to take even a one-day leave due to any illness, they would shout at us and tell us to just resign…”

Another worker from a GAP supplier in Cambodia talked about her rising debt:

“… my income fell from around 200 USD to 70 USD per month. My husband also got laid off at the same time … Our debt is almost thrice our income now and we have no money to meet any emergency expenses, except by borrowing more from private lenders.”

During the pandemic, suppliers under financial distress resorted to wage theft through extensive layoffs, reductions in social security perks, and forced unpaid or underpaid overtime work. Workers were driven below the poverty line as costs of essential commodities rose due to inflation, with some stating that they sold utensils and beds at home to make ends meet. For H&M, 89% of the workers’ wages fell below the international poverty line during peak pandemic months in their countries.

For H&M, 89% of the workers’ wages fell below the international poverty line during peak pandemic months in their countries.

Wage theft is a central aspect of the business models of global apparel brands, and the Covid-19 pandemic has demonstrated how perilous the garment manufacturing system actually is. Through their actions, before and during the pandemic, brands caused and contributed to human rights violations of workers. The post-pandemic recession and resulting humanitarian crisis impacting garment workers indicates that the current system of apparel supply chains is not designed to help production countries or alleviate poverty among garment workers. The garment manufacturing system, with subcontracting, is rattling on the edge. Any kind of shift in the system can lead to collapse, pushing more garment workers below the poverty line in an instant.

Wage Theft Within the United States

Wage theft is not only rampant in Asian countries, but within the United States as well. As of 2015, 85% of garment workers in California experienced wage theft. According to a UCLA Labor Center Study, a shocking $26-$28 million dollars is stolen every week in LA County alone due to wage theft.  Many of LA’s 46,200  garment workers make less than half the minimum wage because brands are underpaying factories while overproducing goods. Brands at the top of the chain, like Forever 21 and Fashion Nova, profit from low wages, wage theft, and lack of accountability. Under the existing piece pay rate system which pays workers by the garment rather than by an hourly rate, workers are forced to produce continuously, without bathroom or lunch breaks, as well as forced to work overtime to meet production targets.

By taking advantage of loopholes in California’s laws, brands have been able to escape accountability for workers’ wages by contracting for the lowest costs possible to manufacturers, many of whom hire subcontractors for even lower sums, leaving 62% of garment makers to work by the piece for an average of $5.58 per hour, according to the Garment Worker Center.

Los Angeles is home to the largest garment manufacturing hub in the US, employing 46,200 garment workers, most of whom are immigrant women from Mexico and Central America. Cut-and-sew garment manufacturing is the second largest manufacturing sector and second largest creative economy in Los Angeles. Brands are continuously putting the lives of many Black and Brown women in danger by forcing them to work in unsanitary environments and for ridiculously low wages. California should be the hub for ethical fashion in the USA, not the capital of sweatshops and illegal practices. Legislation needs to catch up, and provide safe working conditions for garment workers.

The bill, co-authored and sponsored by Senator María Elena Durazo (D), has passed through the full Senate and the Assembly Labor & Judiciary committees, and will reach Governor Newsom’s desk this September. It’s time we get his attention.

show your support by tweeting at Governor Newsom:

Kaanchi Chopra is a designer and an activist from New Delhi, India and a recent Product Design grad from the Rhode Island School of Design. She is passionate about using research and design as tools to create intersectional environmental and social impact. Through her work, she aims to empower marginalized communities and create sustainable change in people’s lives.