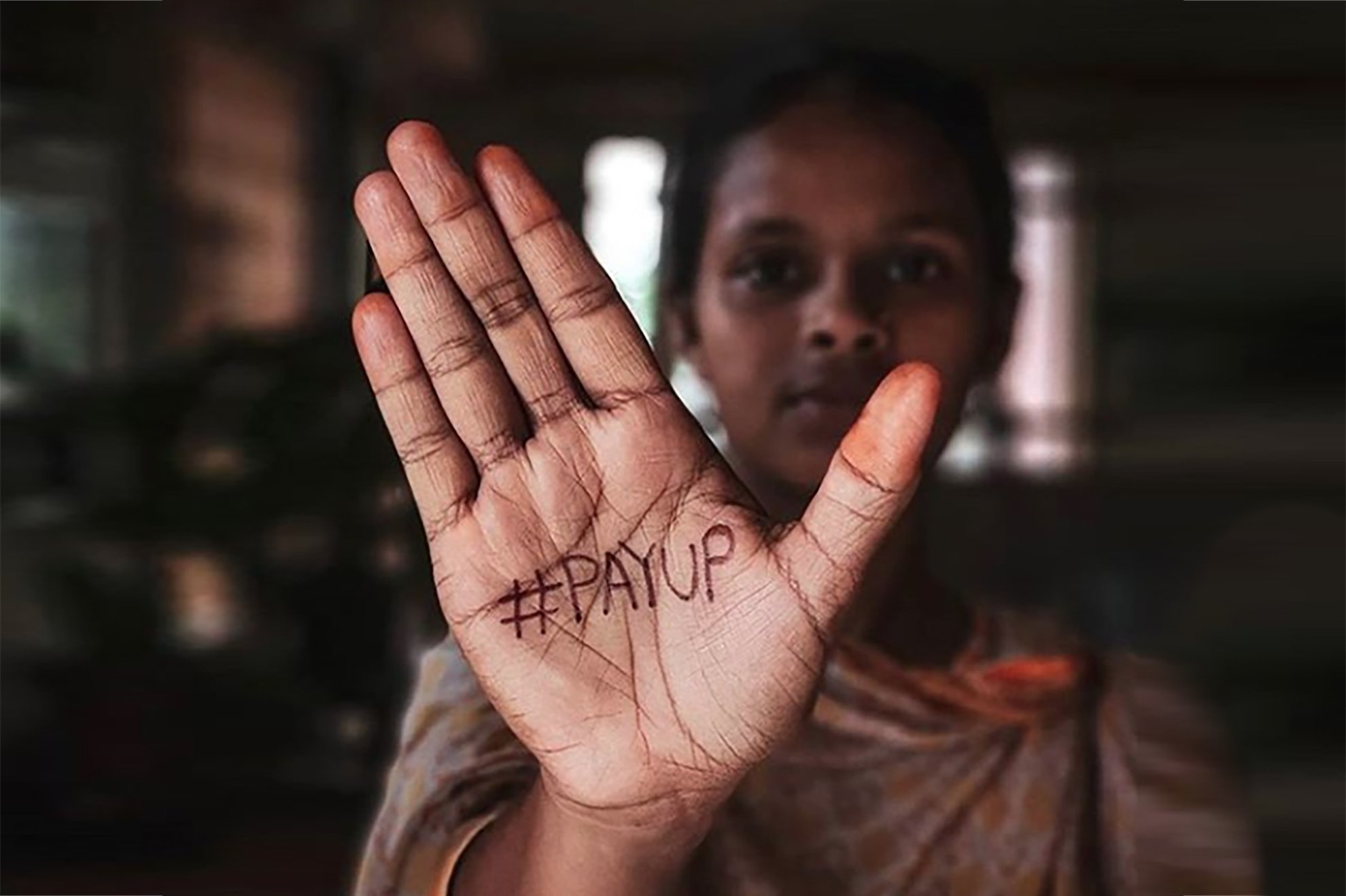 When Covid-19 led to restricted sales a few months ago, a majority of fashion brands cancelled their orders with garment factories all around the world, leaving makers in a financial lurch with unpaid wages for clothes that were already sewn and ready to ship. Remake’s #PayUp campaign has called on brands to remedy this disaster as garment workers struggle globally, without social protections and unemployment benefits. The Clean Clothes Campaign decided to dig deeper into this crisis, resulting in the 2020 report titled “Un(der)paid In The Pandemic.” This roughly 30 page report details garment maker wage gaps accumulated from March, April and May 2020, and specifically among seven countries which produce most of the world’s wearable goods.

After speaking with “network organizations, news sources, government institutions, and other industry experts,” CCC asserts that this is not a completely comprehensive look at the affects of the global pandemic. Each of the seven countries highlighted in the report have suffered greatly from the coronavirus and the domino effect of the many financial crises globally. As the pandemic continues to evolve and spread throughout the world, conditions could be much bleaker than they even appear in the report. As it currently stands, the findings estimate that the global wage gap over the first three months of the pandemic lies somewhere between $3.19 and $5.78 billion USD and undoubtedly growing as time goes on. 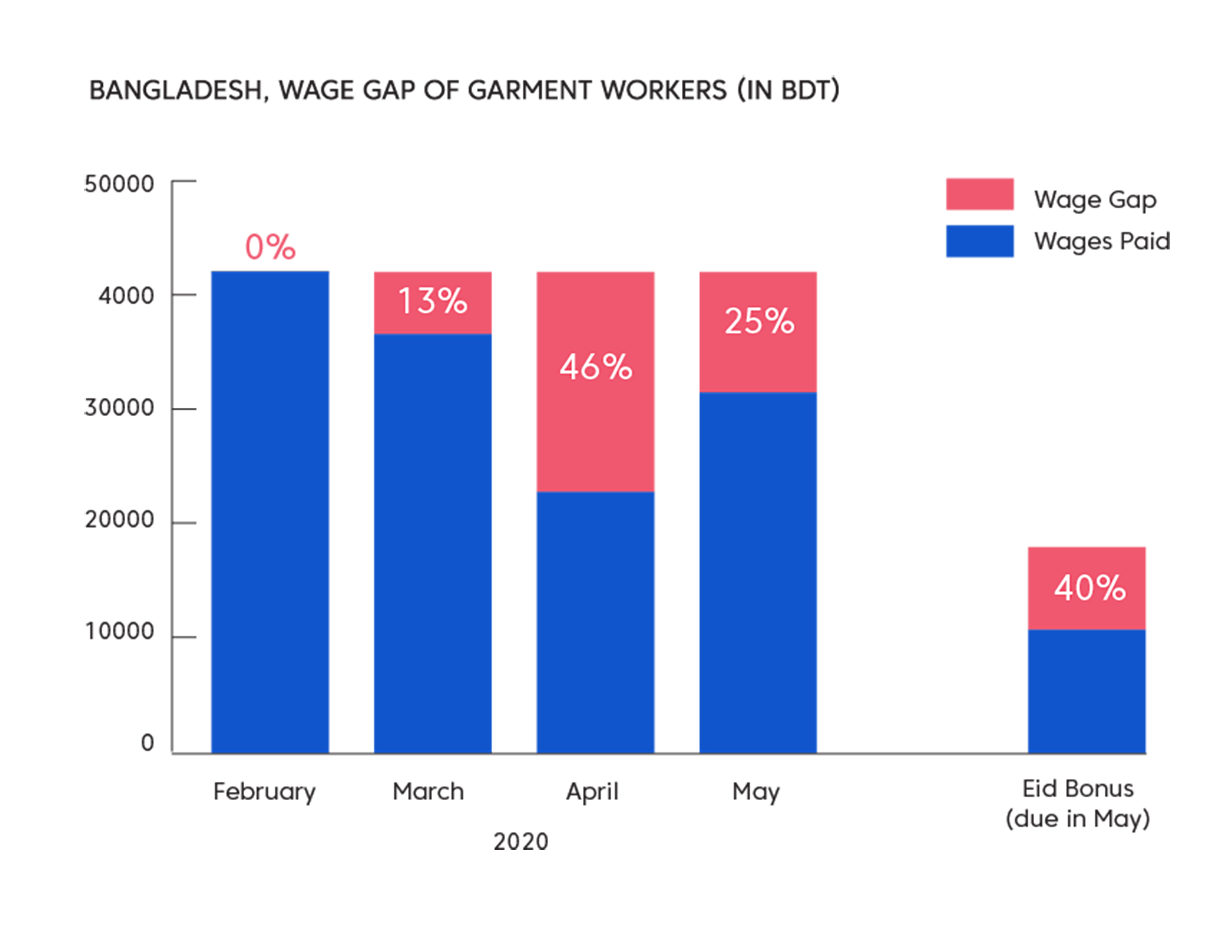 Because much of the garment factories in Bangladesh operate independently from the government, the country’s industry was largely unaffected until March when brands began cancelling orders. However, this same fact has made it almost impossible for all garment workers to receive proper compensation despite multiple government stimulus packages. These funds first excluded small and medium enterprises, and then came without any mandate that it must be paid to workers.

Other government assistance fell into the hands of factory owners, which CCC points out most likely means that “workers in closed factories received no wages, workers in factories under lockdown generally received 65%, and workers in factories without government support received nothing.” While May was the most optimistic month for Bangladeshi garment workers, it did not recover the wreckage of April, overall resulting in an estimated $501 million (USD) in wage losses. 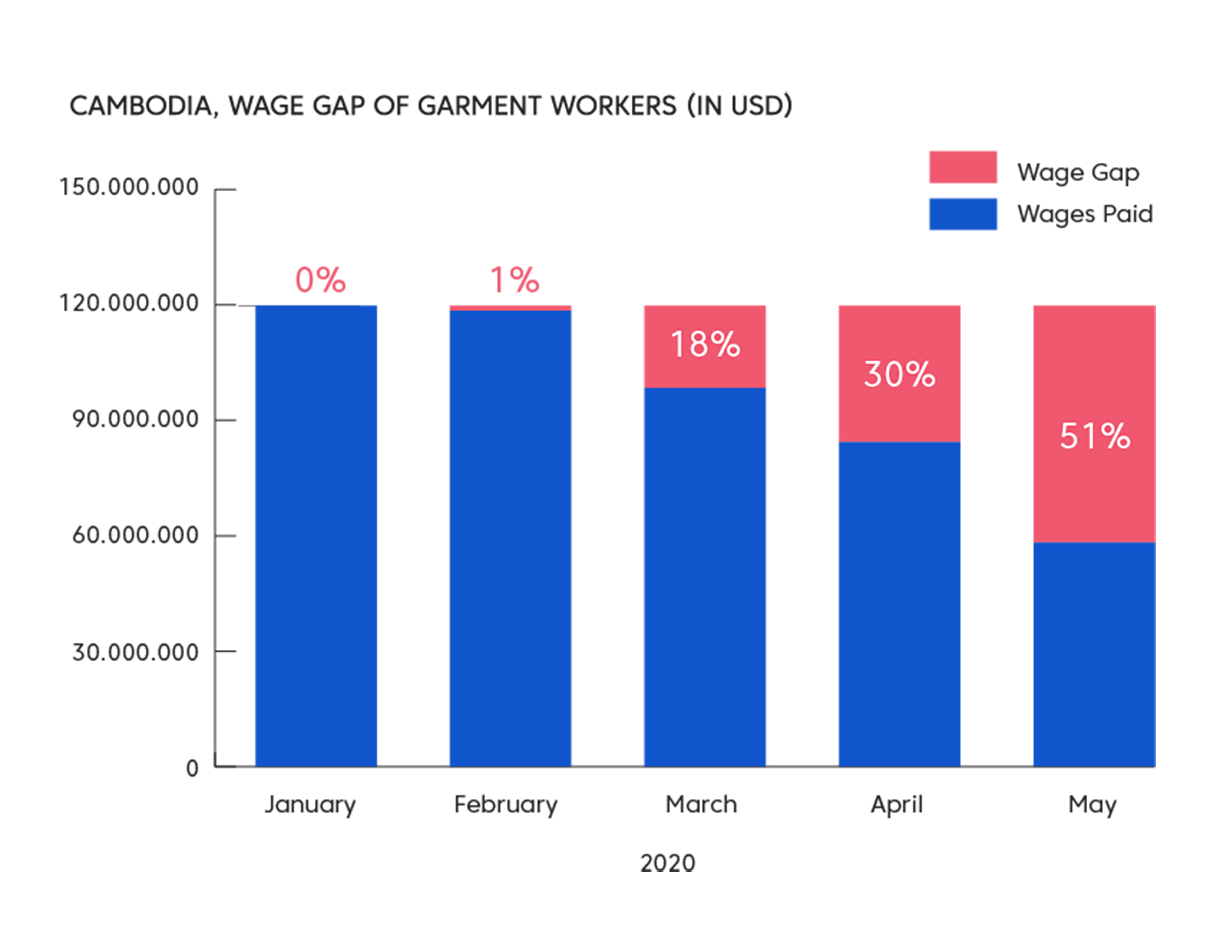 As China went into lockdown in February, Cambodia was hit with raw material shortages usually obtained from the then-pandemic-ridden region. As apparel and footwear are Cambodia’s primary export products, one in every five households is dependent on an industry job. Unfortunately, about 150,000 workers were suspended in that first month and most only received half of their normal salary.

The government postponed the payment of workers’ biannual indemnity pay in June and did not require employers to provide compensation or notice before closing their factories. About 10,000 workers lost their jobs permanently in March and a vast majority of garment workers received substantially less or no payment during the three month period. Estimates show that the wage gap has risen to $123 million (USD) at least. 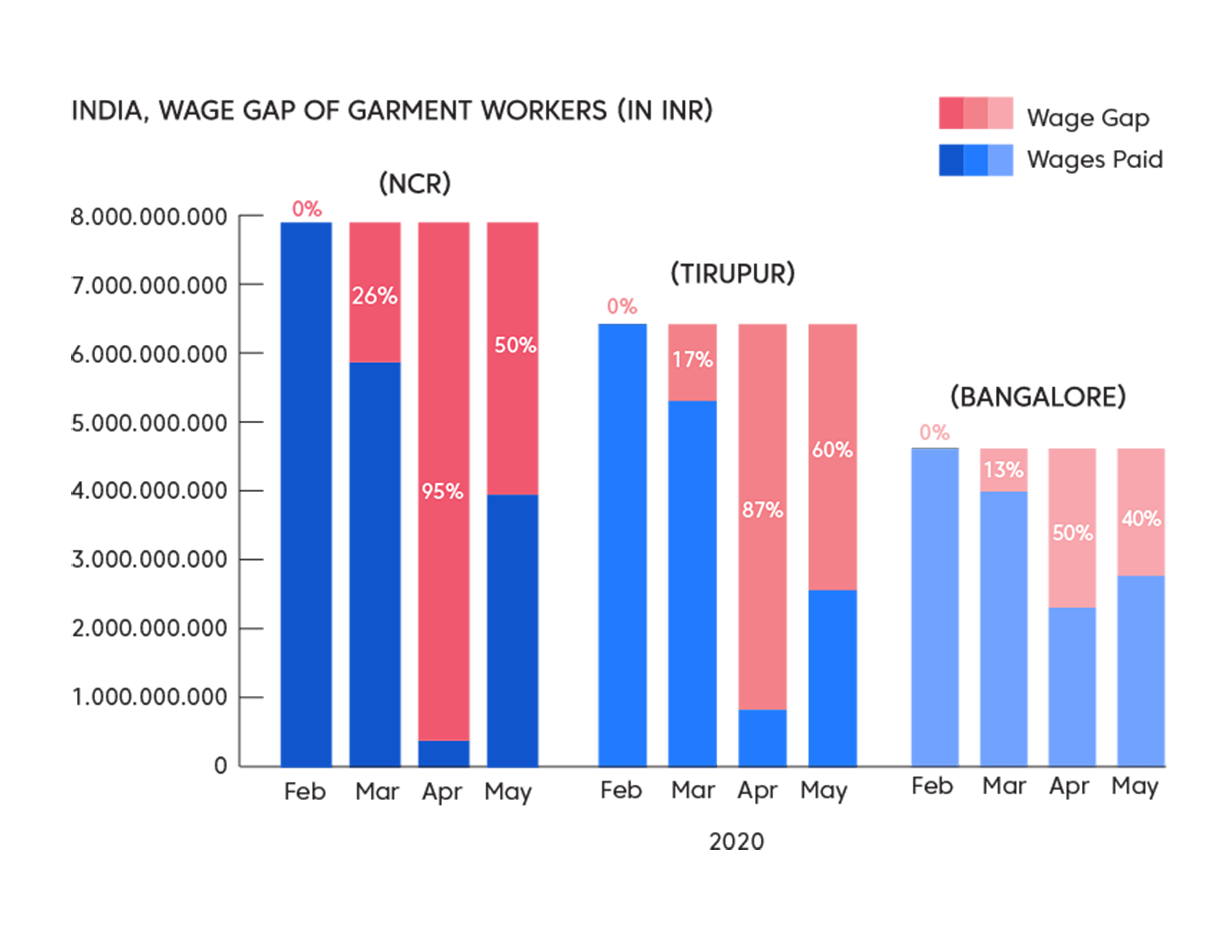 Beginning in late March, the pandemic forced India into a nation-wide lockdown for approximately a month. The coronavirus has resulted in a loss of $2.86 billion (USD) for the country’s “export-oriented” industry. This has left garment workers in the three main garment production hubs — Delhi, Tirupur, and Bangalore — high and dry.

Already, the average wage for a garment worker in India is less than three times the amount needed to support the worker and their family, but the government’s failed efforts during lockdown made this reality worse. Even with government assistance, “the large majority of garment workers received far less than their regular wages or no payment at all during this time,” the report explains. As the lockdown eased up, circumstances out of garment workers control made it nearly impossible for up to 60% to return to work — suspended public transportation and factories only open at partial capacity made it difficult for makers to get back to work. “Very modest” estimates suggest that more than $259 million (USD) in wages were lost between March and May 2020 for the roughly 1.85 million workers in these regions. 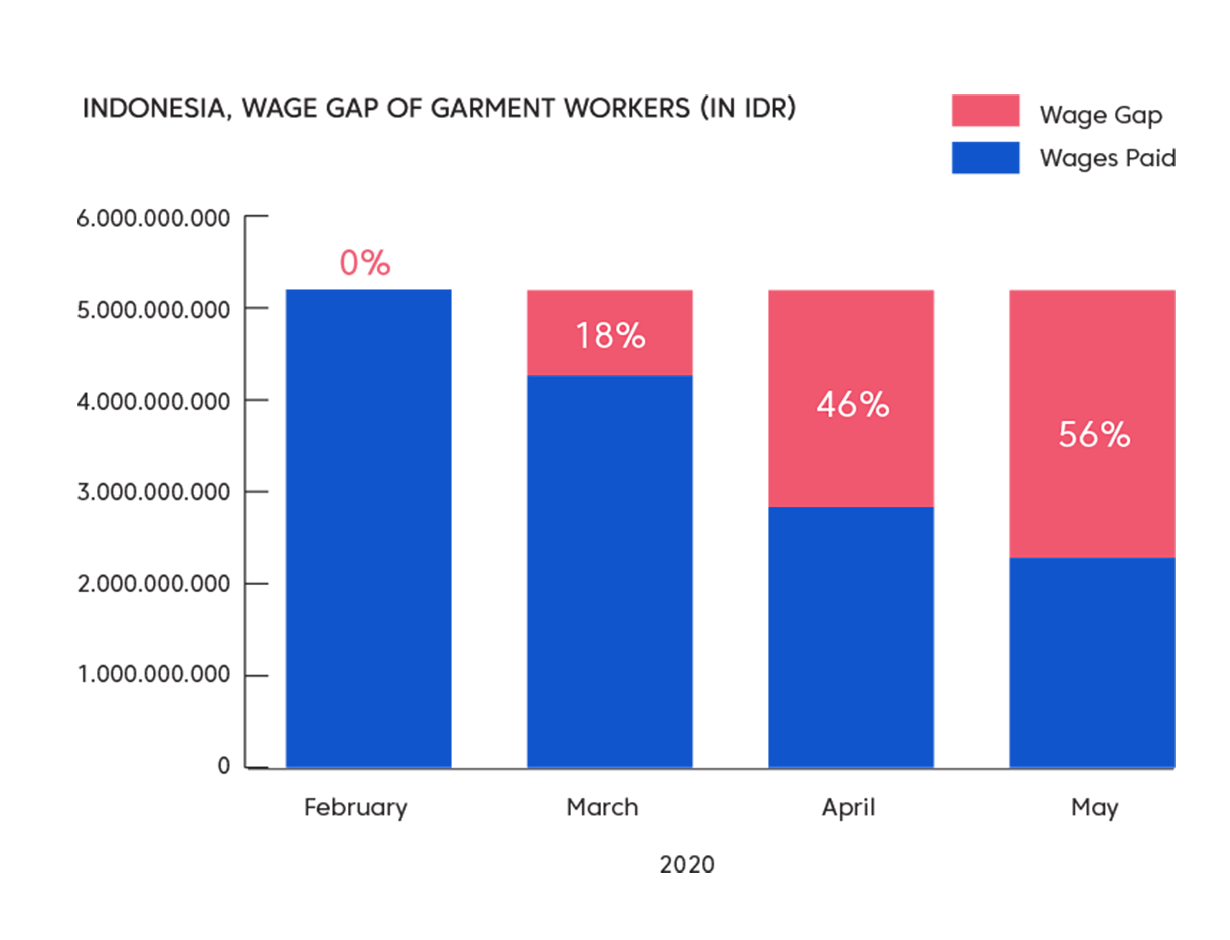 Many factors, including cancelled orders, forced factories to close or reduce production throughout Indonesia when the pandemic first hit. However, few orders were placed after the industry’s reopening in June, leading to confusing government directives and furloughs or terminations from the majority of factories (despite talks with unions.)

By the end of April, the report estimates that 2.1 million workers were affected and 40% of the furloughed received no compensation. All of these factors have resulted in over $405 million (USD) in unpaid wages. 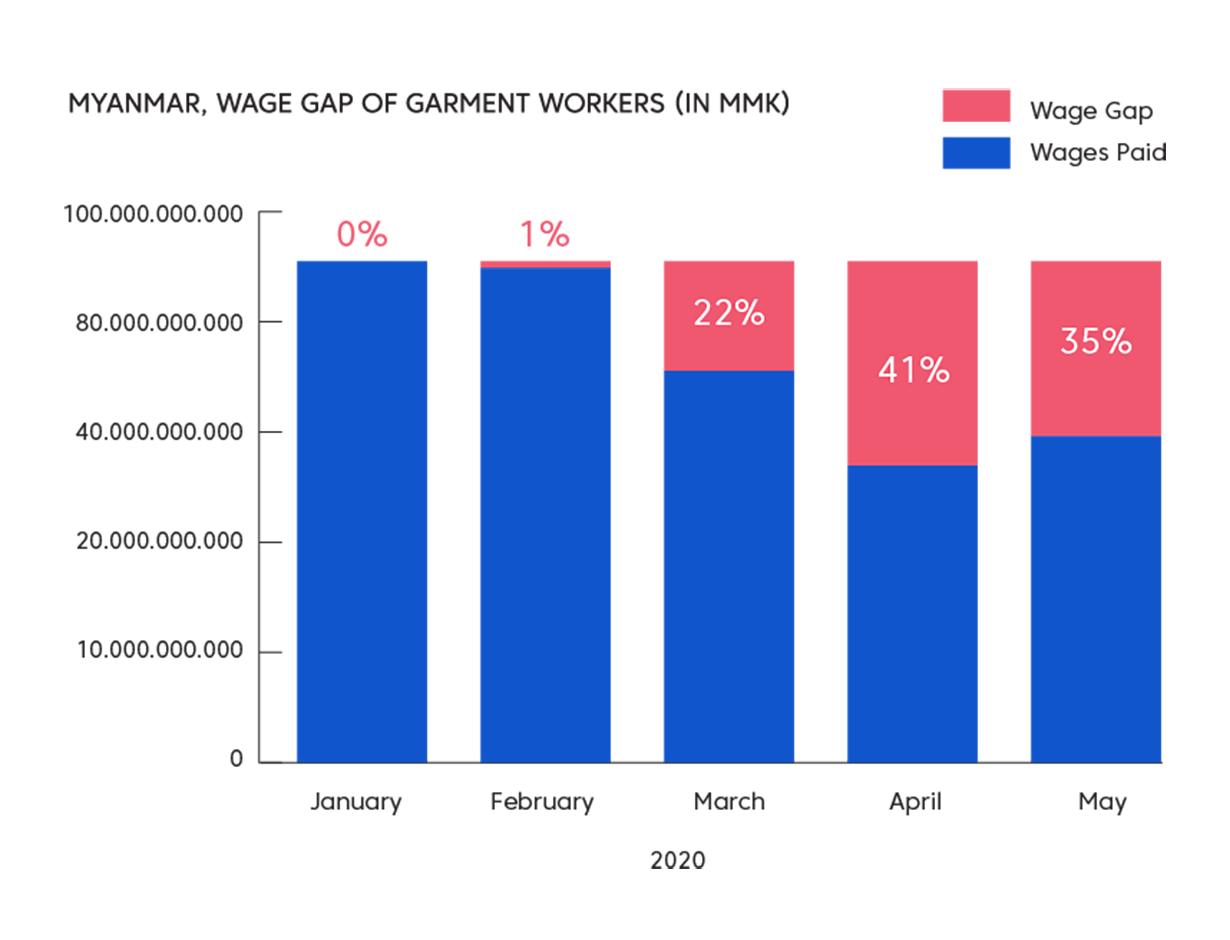 Also affected by the raw material shortage from China, Myanmar saw factories beginning to terminate workers as early as February. Some factories closed completely, with roughly 75 permanently closing between March and April. Following a government mandated lockdown over 10 days at the end of April, workers who were still employed only received about 75% of their normal wage. Possibly 166,000 workers lost their jobs over the course of three months with an estimated total wage gap coming in at $64 million (USD). 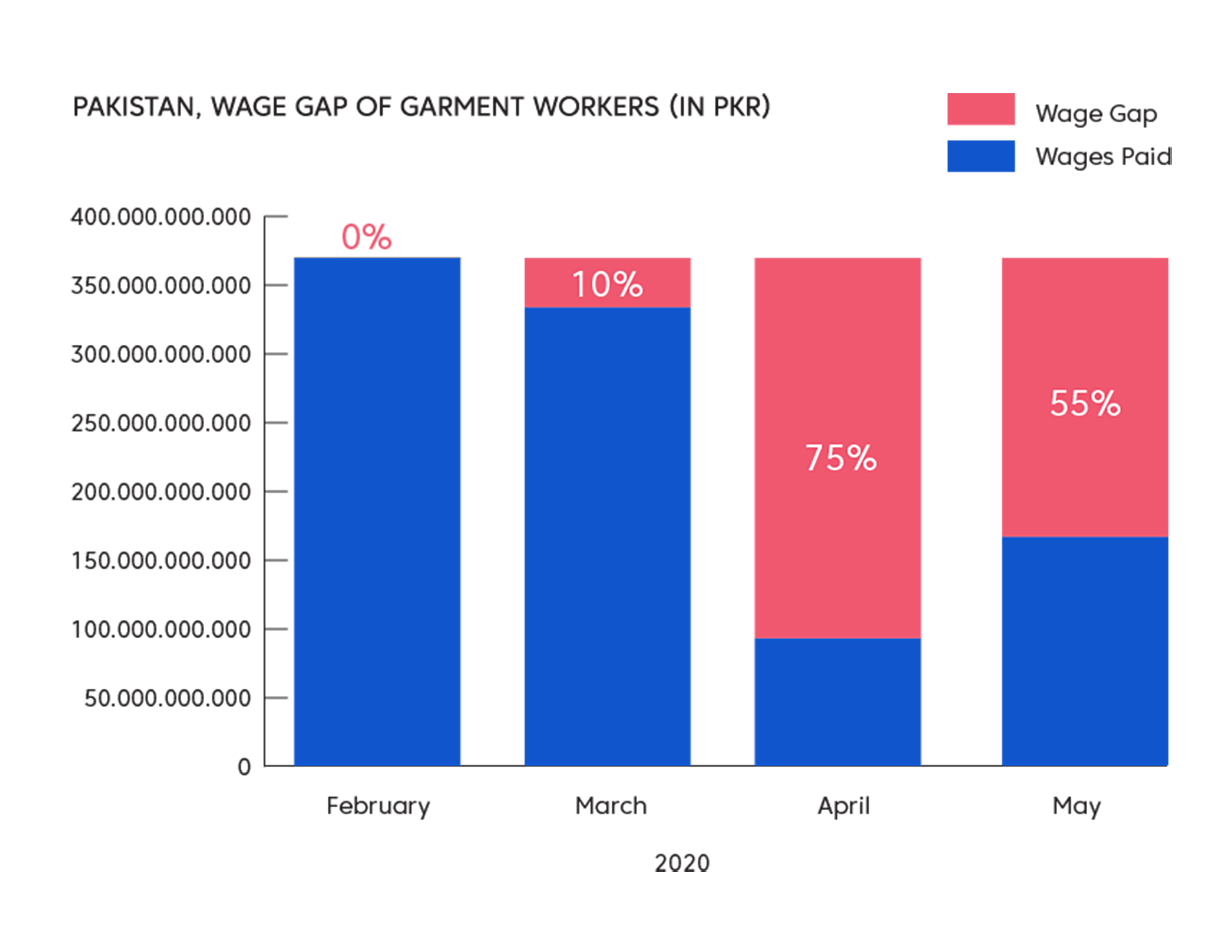 A nationwide lockdown in March shut down factories across Pakistan, quickly resulting in the dismissal of an estimated half a million garment and textile workers. While the government tried to step in, factory owners argued against paying their workers in court and many garment workers did not receive their full pay during that time.

Garment workers in Pakistan operate with little agency as about 85% of them lack formal employment contracts or social security. Government officials made measly attempts to aid workers but could not keep the workforce from shrinking nearly 40% from pre-pandemic times. Overall, the report estimates that Pakistani garment workers lost $320 million (USD) in wages from March to May 2020. 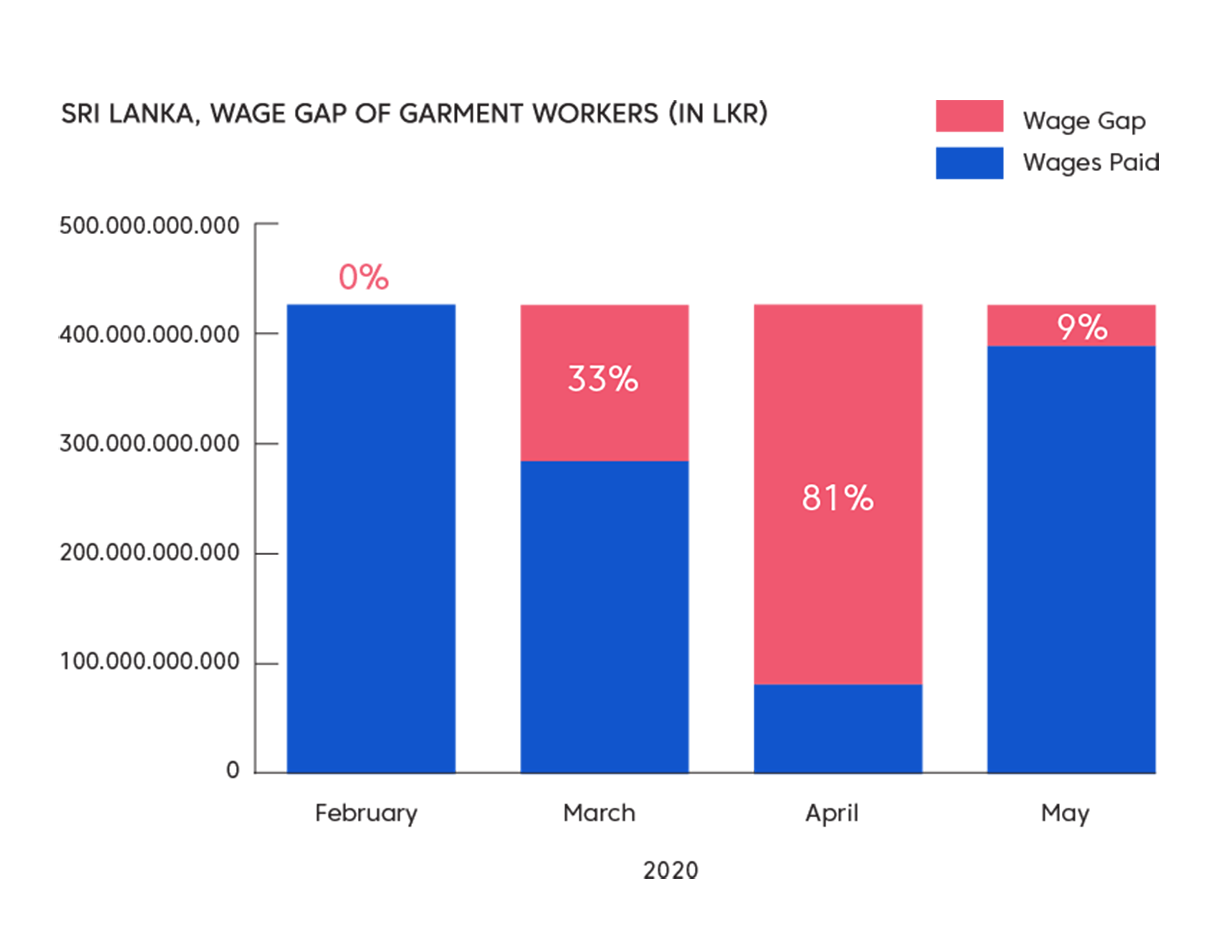 In mid-March, the Sri Lankan government put a curfew in place in response to COVID-19, closing many factories and offices in the process. During that time workers had to go without pay and many employers reported they would not be able to compensate workers for the six months following the lockdown.

While the government offered loans to private businesses once factories reopened, little evidence of the assistance has been found. Further efforts by the government fell flat as programs only placed a temporary bandage on the collective wounds of garment workers. The report found that “32% of employers in the garment industry were unable to pay workers their salaries in May and June,” resulting in $24 million USD in lost wages (or 40% workers’ normal wage.) 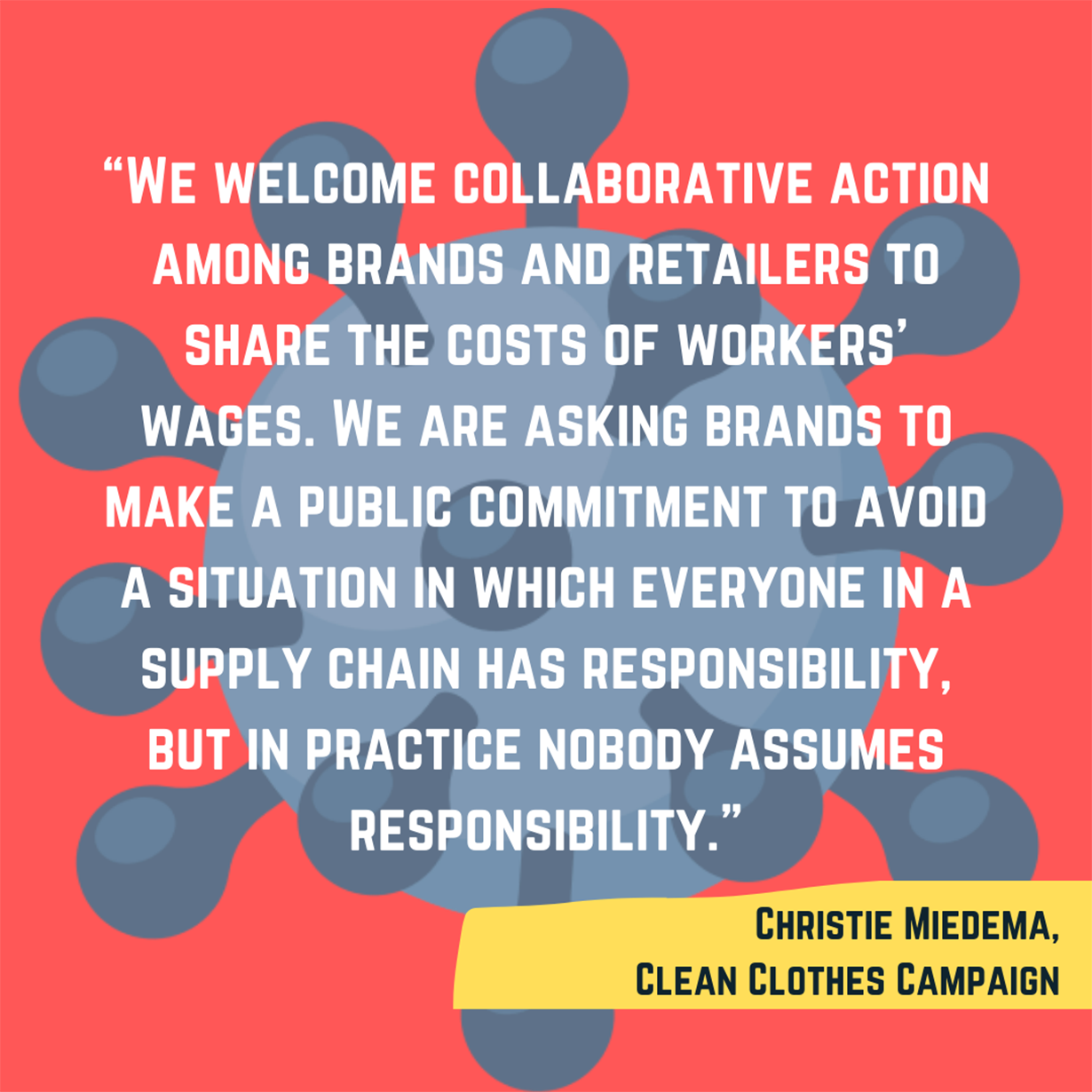 The report concludes with a call to action: “the only way to reverse the catastrophic loss to workers’ livelihoods and prevent a crisis like this from ever happening again is for brands to take immediate and lasting action.” Large retailers like Bestseller, Urban Outfitters and Primark are just a few brands which are known to operate in several of the affected countries.

“The severity of this crisis could have been averted if living wages had been paid, and social protection mechanisms had been implemented.”

Companies must commit to wage assurance and agree to #PayUp for the millions of garment workers who have been left vulnerable during this time. Brands must do better.