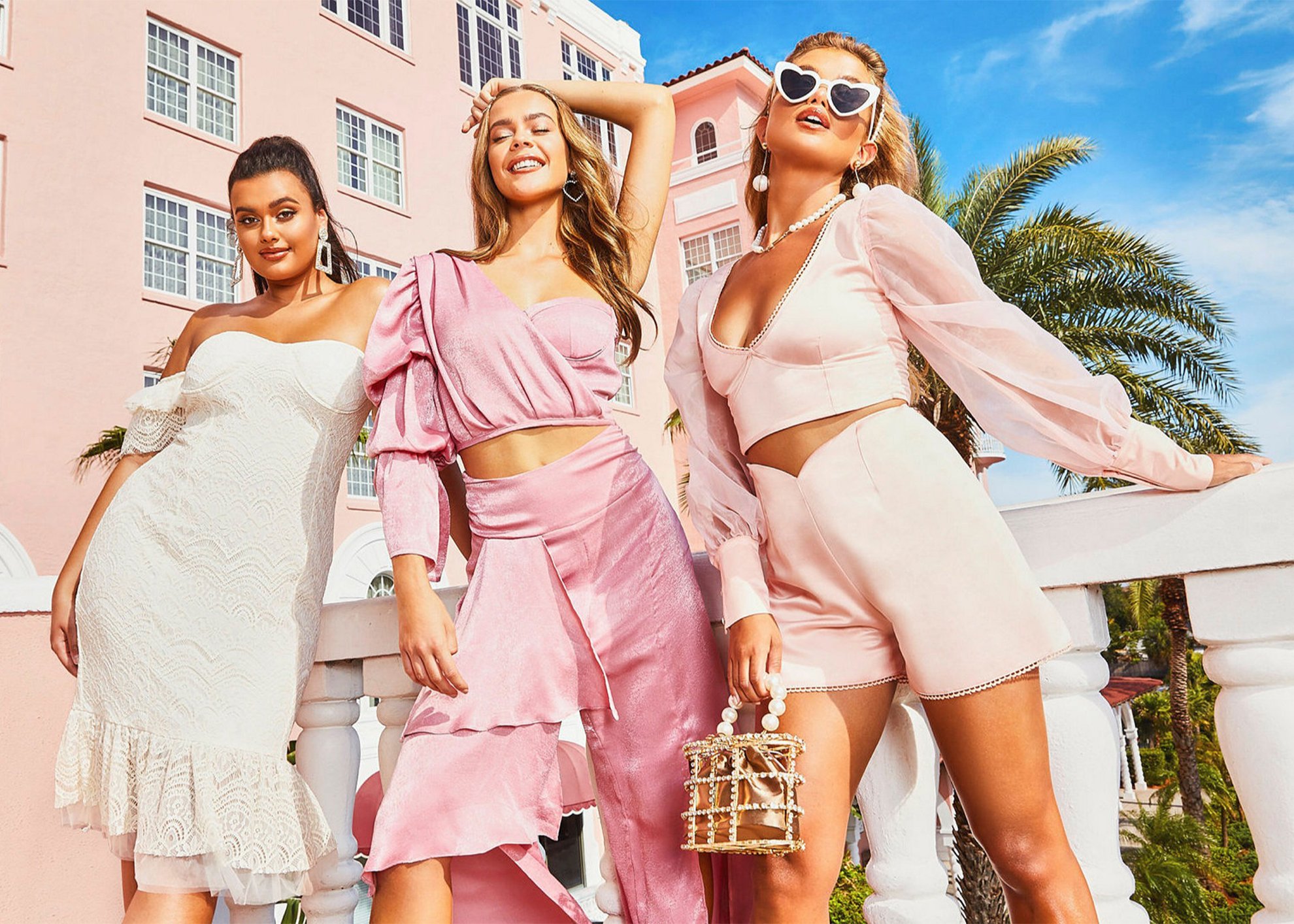 One worker in a factory employing about 100 workers stated that he told his employer he felt unwell but was told he had to come into work. After working that day, he got tested and was found positive [for Covid-19] over the weekend. He informed his manager who told him that he should not inform any other workers of his result and not to send in a sick note. — Testimonial from a garment worker producing clothes for Boohoo

Boohoo is notorious for its use of forced labor, with the average wage of their workers in Leicester, UK, set at just £3 per hour, and some migrant garment workers found to be paid as little as £1 per hour. The living wage in the UK is currently £8.91 per hour. In Labour Behind the Label’s report from June 2020, it was revealed that the brand’s supplying factories in Leicester were committing furlough and tax fraud, forcing their workers into unhygienic factories during national lockdowns, and withholding the documents from migrant workers so they could not report workplace abuse for fear of being deported. On the consumer-facing front, Boohoo is known for its quick turn-around of cheap plastic clothes aimed at disposability, and the brand scores a measly 5 out of 100 in Remake’s Brand Directory. Knowing the brand’s long-term lack of ethics, the fact that Boohoo is further putting workers’ lives at risk during the Covid-19 pandemic is unfortunately no shock to anyone who is aware of the brand’s constant prioritizing of profits over human life.

Perhaps this is why it is so infuriating to see Boohoo attempt to play an ethically conscious brand in a recent Instagram highlight, where the brand tells its customers to set an alarm to ensure shorter showers, to air-dry clothes, and perhaps to even walk to work — completely ignoring the fact that the brand’s entire business model is doing far more harm to both people and the planet than someone taking a slightly longer shower than usual. The emphasis on these small individual actions from the consumers is an attempt to shift the responsibility from Boohoo to the people buying Boohoo’s products, and it’s particularly absurd. In terms of power and impact, brands outweigh individuals on an exponential level, and yet, Boohoo’s tactics remain to shame their customers about not using a reusable coffee cup.

This post, used to promote Boohoo’s new eco-line “Ready for the Future” which features, as the brand calls them, “multi way pieces” —  or in other words, garments that can be worn in different outfits, as all clothes are and should be — highlights the term “outfit repeater,” providing its definition as “someone who wears the same outfit over + over again but makes it feel fresh + new each time.” The post is a contradiction in itself, impressing an apparent need on citizens to buy yet another new garment made out of low-quality fabric in the name of saving the planet.

Originally created as a means of shaming people for wearing the same outfit more than once in a culture of aesthetic Instagram disposability, the term “outfit repeater” has only recently been reframed by slow fashion activists as a positive concept. After all, the most sustainable clothes are the ones already in your wardrobe. With the term now showing up in slow fashion spaces as a means to discourage buying new and generally slowing down your consumption, the phrase “outfit repeater” now stands proudly as something to aspire to be in the fight against the rapid consumption culture promoted by fast fashion. (It’s even a term that is at the heart of Remake’s No New Clothes campaign!)

By utilizing the term in an Instagram post, Boohoo is attempting to align itself with the sustainable fashion camp, despite being one of the largest offenders against the planet and the people who make their clothes. The top featured in the backdrop of this Instagram post is one which is trend-based, meaning, a style that is popular at the present moment but will be quickly replaced with something new. It is not a shirt that can be easily worn across seasons, and it is made out of polyester  — likely sending it to a landfill after only a few wears. The style of this particular top has lately been seen frequently on influencers and reality TV stars this past summer (if you’ve watched one episode of Love Island UK 2021, you know what we’re talking about), when next year, because of the ever-shifting trend cycle, you can guarantee a new trend will be replacing this one, and Boohoo will be quick to market it as the next “must-have.”

This “Ready for the Future” range features 466 products (417 in Women’s and 49 in Men’s) made out of recycled polyester (aka plastic) – a drop in the ocean compared to the rest of Boohoo’s lines, with +500 pieces listed in ‘New In’ alone (they don’t provide us with any more detail on their product numbers or on the production output of these garments, something that is dodgy in itself). One article in Vice showed that over a week of monitoring, Boohoo uploaded 772 new products — that’s 116 new products every day. The entirety of the “Ready for the Future” collection is the same as 60% of that week of Boohoo’s production. In the Men’s section, Boohoo tells us how the products in this line “are made of more than 20% of more sustainable materials” — a pitiful statistic that is so vague there’s really nothing to be gleaned from it. And this is important. Boohoo isn’t actually telling us anything with its greenwashing vocabulary, instead, the brand is solely aiming to trick potential customers into thinking they are taking steps towards climate action, when in actuality, they’re not making any substantial strides. Like many other eco-lines promoted by fashion giants, this one is yet another example of a brand pushing an environmental agenda it ultimately doesn’t believe in and certainly doesn’t act upon in any meaningful way. No matter how many of the brand’s materials are recycled, production at this speed is extremely damaging and inherently unsustainable on the most basic level. If Boohoo truly wants to be ready for the future, it should look into drastically scaling back its production.

Boohoo-owned brand Nasty Gal has also amped up its greenwashing tactics recently, with social media posts highlighting the brand’s supposed transparency while somehow completely avoiding publishing any details regarding their supply chain and production process. Nasty Gal shares that by 2025, its “polyester and cotton will be recycled or more sustainably sourced,” and that by 2030, “all the materials [it uses] in [its] clothes will be more sustainably sourced.” First of all, this timeline is lagging. Climate disasters are already occurring all over the globe, and they have been for decades. There is simply not enough time to switch to “more sustainably sourced materials” (which is ambiguous in its actual meaning) in nine years-time. Frankly, that is time we don’t have, and the lack of urgency in these non-specific promises demonstrate the brand’s apathy when it comes to its environmental impact. Additionally, nowhere in this post does Nasty Gal mention how much the people who make their clothes are paid, let alone any plans for degrowth — two major criteria that are deeply intersectional with promises of sustainability.

Unfortunately, Boohoo and Nasty Gal are far from being the only brands that appropriate the language and aesthetics of activist movements for the sake of financial profit. H&M has recently come under fire for its new campaign featuring young environmental activists and using imagery and language associated with environmental and social justice campaigns, including colors associated with Extinction Rebellion protests. The brand has adopted phrases such as “The Future Belongs to Those Who Live In It” and “It All Starts With Planting Seeds” – ironic considering the history of gender-based violence in H&M’s supply chain and their current refusal to renew the Bangladesh Accord, a legally-binding agreement that would protect the lives of millions of garment workers in Bangladesh.  We have to ask: whose futures do you really care about H&M?

Brands are only getting more clever about co-opting the language of activist spaces to further their own financial agendas. Imagine what it might look like if these fast fashion brands put all that energy (and marketing budget) into actually making their products sustainable. It’d be a whole new world — one where the future truly belongs to those who live in it.