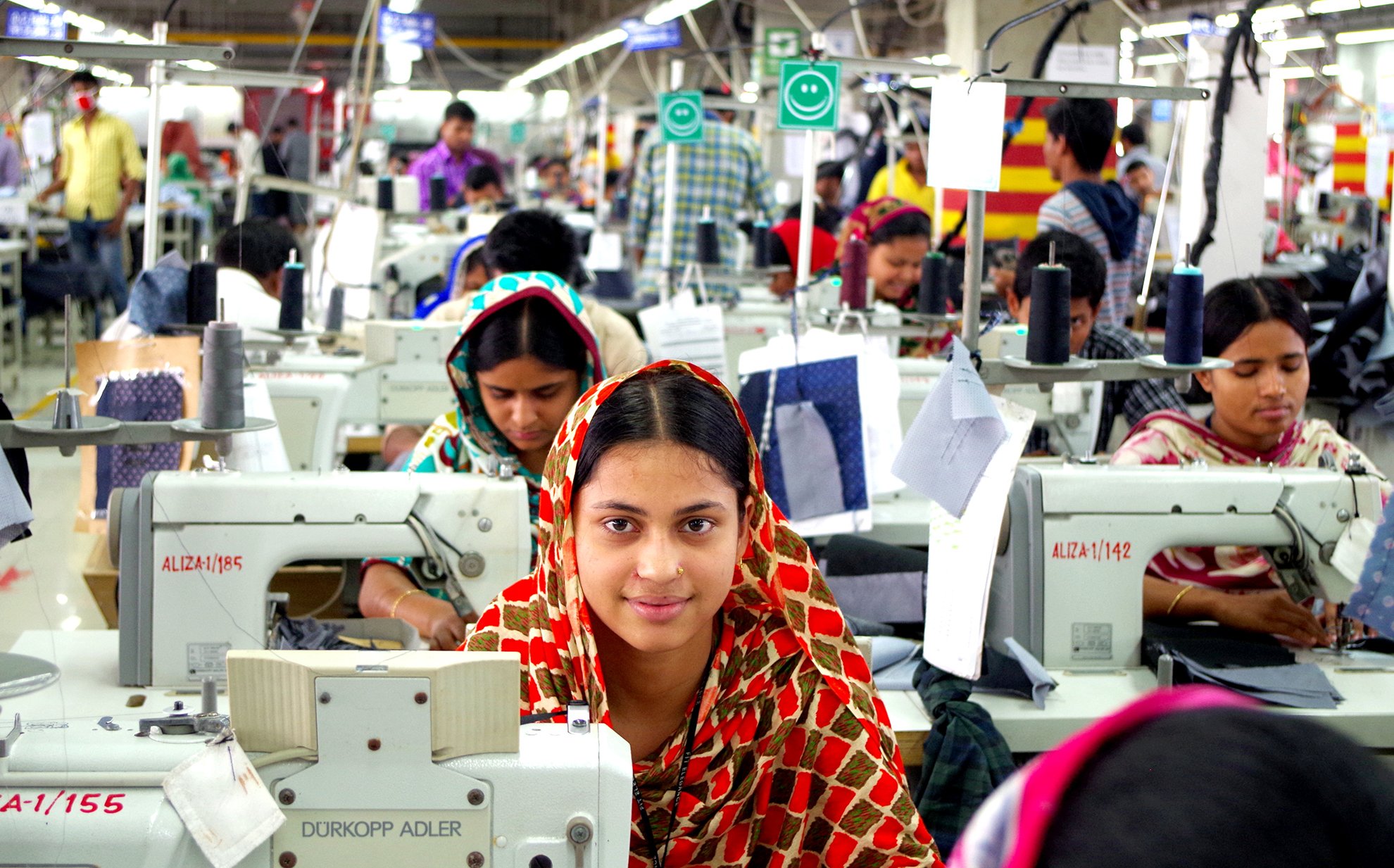 Rana Plaza was an eight-story building in Savar, Bangladesh, with five garment factories inside that made clothing for many of the world’s biggest brands, including Walmart, Mango, Primark, The Children’s Place, and Joe Fresh. Workers in the factories noticed cracks in the building — signs of dangerous structural failure — but factory owners insisted that they do their jobs or be fired. On April 24th, 2013, Rana Plaza collapsed, killing more than 1,100 garment workers and injuring over 2,600 more.

The Bangladesh Accord on Fire and Building Safety was created in 2013 in the wake of Rana Plaza. The Accord is a legally binding agreement signed by individual brands, two global union federations, eight of their affiliated Bangladeshi unions, as well as four witness labor rights monitoring organizations. The agreement ensures independent safety inspections of factories, remediation of problems found by the independent inspectorate, safety training programs for workers in factories, a worker complaints process, transparent reporting of all aspects of the Accord programs, and accountability by apparel brands and their suppliers.

According to Laura Guttierez of Workers Rights Consortium (WRC), one of the Accord’s witness signatories, international brands claimed to be responding to these disasters. They visited factories but did nothing to change the physical building problems that were causing these deadly accidents. There needed to be a way for brands to be held legally accountable. There had been a call to brands from international and Bangladeshi labor groups to sign some sort of binding agreement on safety. Only 2 brands signed up, Tchibo and PVH. The agreement was never implemented.

The Accord’s independent factory inspections identified over 144,000 fire, electrical, and structural hazards across 1,600 garment factories in Bangladesh, more than 90% of which were remediated; trained over 1.7 million workers on workplace safety; and resolved 359 safety and rights complaints.

But the 2013 Rana Plaza tragedy woke up the world to the grave health and safety concerns (among other inequities) in Bangladesh’s garment industry supply chain. Galvanized by the disaster, millions of consumers signed their names to petitions and joined protests urging international brands and retailers to take responsibility for the workers who made their clothes. More than 200 brands signed The Bangladesh Accord on Fire and Building Safety.

Since then, the Accord’s independent factory inspections identified over 144,000 fire, electrical, and structural hazards across 1,600 garment factories in Bangladesh, more than 90% of which were remediated; trained over 1.7 million workers on workplace safety; and resolved 359 safety and rights complaints.

Each brand that signs the Accord is held ultimately accountable for what happens in their supply chain. If factories producing clothes for that brand are found to have fire, electrical, and/or structural safety hazards during Accord inspections, the brand must make sure that its suppliers have the funds to remediate those problems. If needed, brands must negotiate commercial agreements that allow suppliers to make these changes. If the brand does not comply, “there is this whole process that may end in a courtroom.”

In January 2018, a landmark settlement was reached after a two-year arbitration process with a participating brand for its delays in remediating life-threatening hazards in its suppliers. The settlement included $2 million to fix issues — such as locked gates, structural faults, and lack of fire doors and sprinkler systems — in more than 150 factories, as well as $300,000 for the unions who brought the case, for the “Supply Chain Worker Support Fund.”

You saw factories literally transform, some had to close. For the first time, you saw real money being put into building safety.

According to Miedema, if the garment factory itself might not want to change anything, the factory “would be put on notice” and an escalation procedure would follow until the factory corrects its building’s problems. If the factory does nothing, it’s labelled ineligible for production with all Accord brands. For those factories, that means there are 200 brands that they can’t count on as customers anymore.

After the Accord was signed, Guttierez, who was based in Bangladesh, “saw everything shift in terms of the physical landscape of the factories in Bangladesh.” She states, “You saw factories literally transform, some had to close. For the first time, you saw real money being put into building safety.”

Another key feature of the Bangladesh Accord has been worker involvement. According to Guttierez, The Accord, unlike the voluntary corporate initiatives that preceded it, has built in worker participation at every level.

Through the Accord worker safety trainings, says Christie Miedema, workers get vital information like: “what is safety, when am I safe, what things do I need to look for, how can I reach the Accord, how can I be part of a safety committee in my factory?”

According to Laura Guttierez, the complaint mechanism is one of the key components of the Accord’s success. Worker complaints run the gamut from not receiving maternity benefits to identifying cracks in buildings. Some complaints “have led to the immediate evacuation of factories that were unable to reopen until the problem was remediated — very likely preventing another Rana Plaza.”

“Lots of brands had complaint mechanisms in factories before. Workers never trusted them” because nothing changed. But the Accord’s complaint mechanism “created real, tangible prompt results. Factories were evacuated, workers were paid their compensation, their severance, whatever it might have been. It is seen as a trusted and reliable complaint mechanism that workers can use. And it is being used.”

There are also key roles that workers play in Accord inspections, OSH committees, and staff meetings. But what’s most important to Guttierez is that workers actually sit at the table with the brands and are signatories to the agreement itself. “You have, from the beginning, worker representatives. That’s not just global union federations, that’s also local Bangladeshi unions.”

One case that Guttierez worked on quite closely was at the Dress and Dismatic factory where there was a union. Guttierez stated: “In this case, worker leaders had identified that the factory stored excessive material on one floor of their multi-story building. Those workers reported that to the Accord and the Accord promptly visited the factory and confirmed the workers’ findings. After the Accord left, a number of those workers were terminated by the factory management. The union reported the retaliation to the Accord. After some time, the workers were all returned to work with full back pay. That was huge, not just for the union leaders but the workforce and workers in other factories observing the situation. To see that the union can advocate for workers’ rights, be retaliated against then return to work; that’s unheard of. The Accord made that possible.”

The original Accord was an agreement signed for five years, until 2018. “But safety is not static,” said Guttierez. “You have to continually work at it. It became very clear that there was a need to extend the Accord beyond the original expiration date.” In 2018, the Accord was re-signed with some improvements based on five years of experience.

At the same time, Bangladeshi garment factory owners, who are often represented by the BGMEA, (Bangladesh Garment Manufacturers and Exporters Association) began to resist the Accord’s work. In Guttierez’s opinion, “The Accord was making them do something they’ve never had to do before: make their factories safer and in some cases spend a lot of money to do so, and the BGMEA and manufacturers quite honestly just got fatigued. The original public pressure on factory owners that came as a result of Rana Plaza had begun to wear off. Manufacturers started to really push back on the Accord’s role in the industry. There became a very public local campaign against the Accord that was led by the BGMEA.”

Eventually, the RSC (Ready Made Garments Sustainability Council) was established in 2020. The RSC became the local implementing body of the Accord. The Accord — the agreement itself between brands and unions, and the Accord secretariat headquartered in the Netherlands — remains in effect until May 31st, 2021. But the Accord technical staff, who up until 2020 implemented the agreement in Bangladesh, transitioned to the RSC.

Now, in addition to the brands and unions, one third of the RSC board is made up of manufacturers, “which raises concern about the power dynamic,” says Guttierez. “The moment you bring manufacturers into the fold, you have to question the independence of things like the complaint mechanism. It opens up space for potential interference by the manufacturers.”

At this time, the RSC does not replace nor eliminate the obligations that the brands still have to keep their factories safe. But the Bangladesh Accord is set to expire on May 31, 2021. Negotiations are underway between the brands and the unions to extend the time of the Accord and expand it to other countries, but Guttierez and many others are worried about the present Accord negotiations.

During a WRC press briefing on the subject entitled “Protecting Progress,” Ineke Zeldenrust, international coordinator at Clean Clothes Campaign, was very blunt about her concerns:

“You need that globally binding framework to tie brands to their obligations. The work is not done… but brands are now proposing a new type of agreement—actually an old type of agreement—one that is no longer legally binding and no longer has an independent secretariat to oversee the compliance. Under the guise of setting up a lean structure what is in fact happening is a return to self-monitoring and between these two things, dismantling of the independent secretariat, and unions no longer being able to take brands to court, two key features of the Accord’s success will be removed.”

I find it incredible in the context of Covid and in light of all the other problems plaguing the industry in Bangladesh, and in other countries, we even have to fight again to keep the one program that we all agree is functional in existence and still must fight eight years on to get it expanded.

“I find it incredible in the context of Covid and in light of all the other problems plaguing the industry in Bangladesh, and in other countries, we even have to fight again to keep the one program that we all agree is functional in existence and still must fight eight years on to get it expanded.”

Eight years ago, the Rana Plaza collapse caught the public’s attention. “People have forgotten, they have other worries, there is a pandemic going on — so much else going on,” said Guttierez. “These brands are incredibly sensitive to public pressure. It’s in large part because of that public pressure that we got the Accord and that the Accord has been allowed to stay.”

“We need peoples’ voices,” said Christie Miedema. She continued: “The fact that there’s no binding agreement yet, and the current one runs out on May 31st, has everything to do with the pandemic. Brands were distracted and they might have bet on the fact that nobody would care right now and they could just get away with this. The most important thing right now is that people start to show that they care about workers’ safety, that they don’t believe in anything that’s not legally binding could come with the same results and would be acceptable.”