Fashion design schools have an allure. Many young women in their early twenties get fashion degrees hoping to launch their own lines and drive the aesthetic of a camera-ready $3 trillion industry.

In reality, they enter a competitive market, applying for entry-level design positions in expensive cities. If accepted, they will work long days, under tight deadlines and fluorescent lights, all for salaries as low as $30,000. These graduating designers have little choice but to dive in and hope for a better future.

Interestingly enough, overseas, where roughly 97% of our clothes are made today, there are also young women in their early twenties toiling away on the assembly line. Their wages are low, working hours long, and conditions often difficult. And yet, for these young makers, factory jobs also represent hope for a better future.

Today we buy more clothes and yet somehow pay less for them. This phenomena called fast fashion, much like fast food means the industry cuts corners. What started as a way for more of us to look good on a budget has resulted in a rise in cheap, chemical filled clothes, brought to us by human hands forced to work longer hours for low wages.

But this article isn’t about shaming the fashion industry for building a broken business model. It’s about linking the amazing women on either end of the supply chain – designer and maker – to come face to face, woman to woman, to create a more human centered fashion industry.

80% of the people who are making our clothes are women, usually just 18-24 years old. Their hopes and dreams match ours: to be happy, healthy and see the world. At Remake, we pass the mic back to the women hidden at the other end of the supply chain. We have traveled to Haiti, India, Pakistan and China, to ask her to share her stories.

Our recent Remake Journey to Cambodia was in partnership with Levi Strauss Foundation and Parsons School of Fashion, home to fashion icons such as Donna Karan, Alexander Wang and Tom Ford. We took three of Parsons’ amazing graduating designers:

“As a fashion designer, we are so distant. A lot of our industry uses makers oversees and are so disconnected from them, but these are the people who are creating our work and our designs. So meeting with them and having that more manifested in our heads is a connection we need to be thinking about more.”

Meet Allie Griffin, whose great grandmother used to make our clothes right in NYC’s old garment district. Coming to a prestigious school like Parsons and recently interning at Oscar de la Renta, she feels that in one generation her family has come full circle from maker to designer.

“Fashion effects economies, politics…something you don’t normally think about. But at the end of the day there are people making our clothes, human lives depend on these jobs. That’s why fashion is important to me.”

Meet Anh Le, who designs menswear and has recently interned at American label Thom Browne. Her parents came as refugees from Vietnam, where her family worked in the garment industry. As an Asian aspiring designer, she wants to do right by creating clothes that are ethical and respect the maker.

“I’m really interested in being part of this new generation of fashion designers. We are interested in finding ethical and sustainable ways to participate in fashion. There are a lot of problems that I see, like low wages, underage workers, poor working conditions. I know a lot of my fellow students and I think it’s time to change how we make fashion.”

Meet Casey, who has designed future forward collections in collaboration with Tide and Intel. She is deeply interested in creating more sustainable patterns and textiles in union with factory systems.

We filmed and documented this Journey to bring the stories of Allie, Anh Le and Casey coming face to face with Cambodian makers back to you: 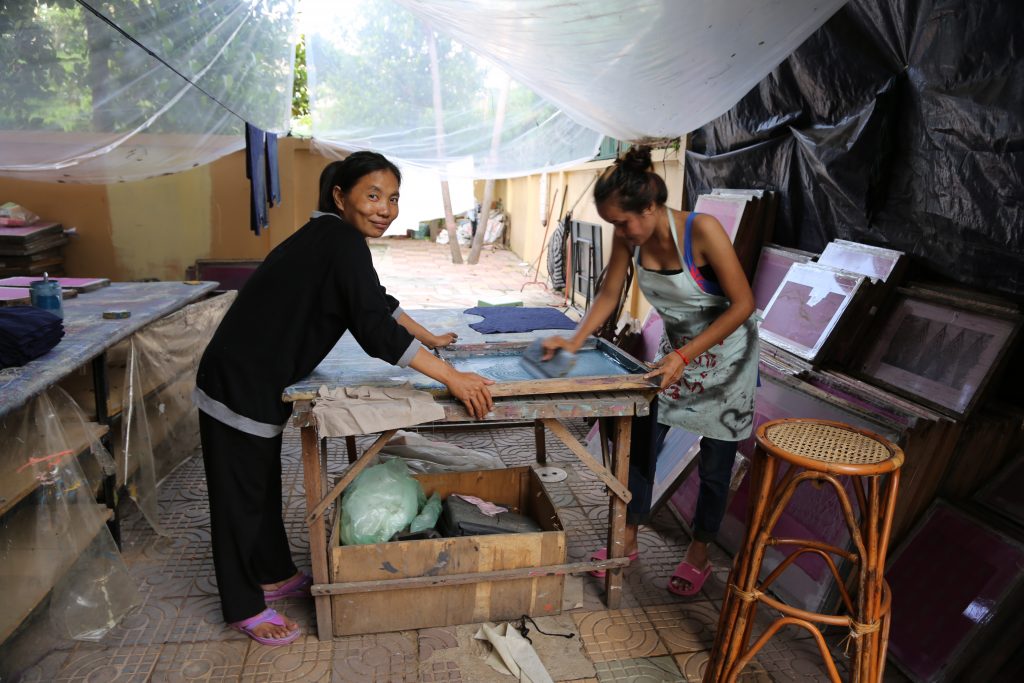 We visited Cambodia’s first zero-waste brand Tonlé to experience the power of fashion as a force for good. Tonlé provides at-risk women with a living wage, health care and good working hours, while also being good for our planet.

“From the moment we stepped inside the gate you could feel it, it was such a special place. There were a group of women at tables in the front yard knitting together, and they welcomed us warmly with smiles,” recounted Casey. “I spoke with Ny, a transgender male who is in charge of stock and shipping.” 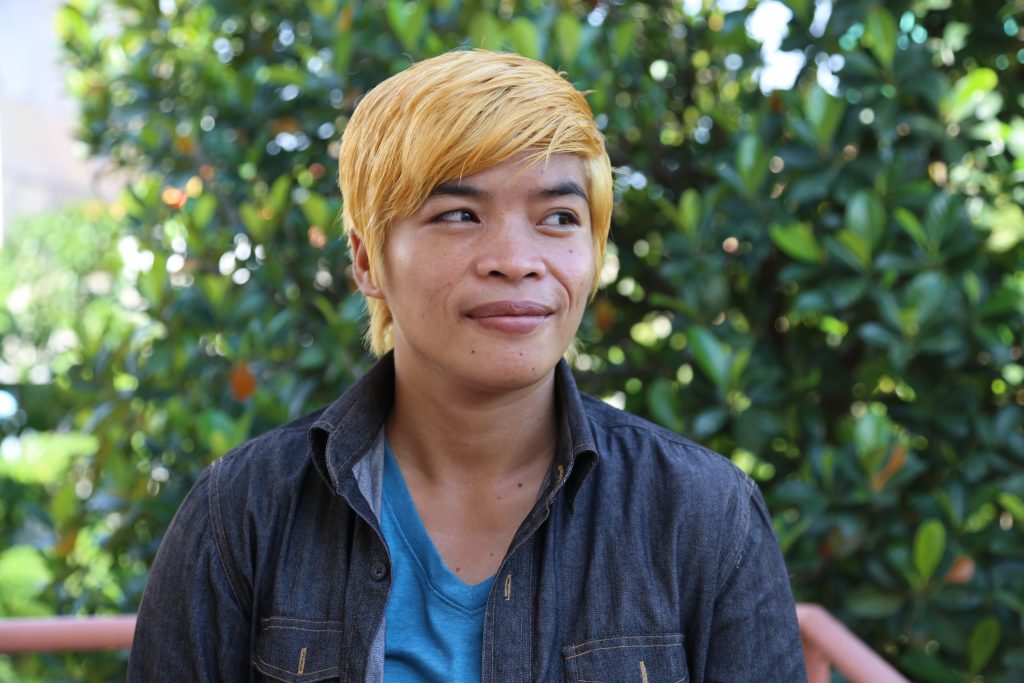 “I think about how the clothes we make go all over the world. I also think that the people who buy from Tonlé really care about us, the people who make them. Most of the makers in the clothing industry come from really poor places, and they work so hard to try to achieve better lives. I want there are more brands like ours so that there are more people who have jobs as good as mine.” – Ny 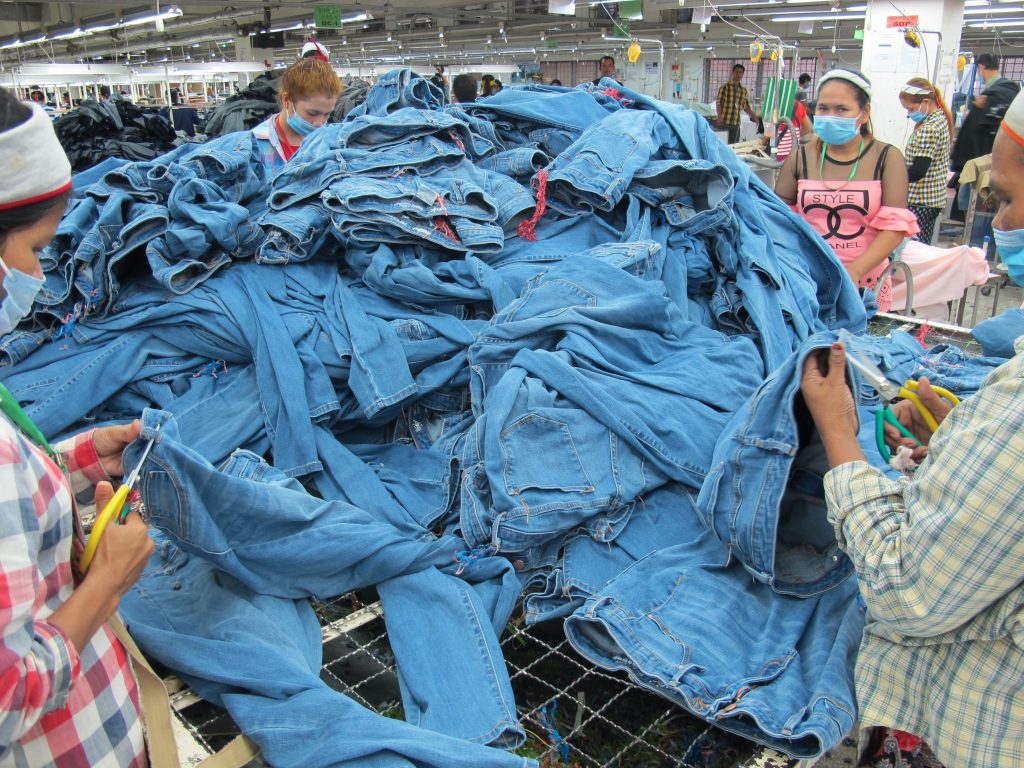 We traveled down a winding bumpy and dusty road to a denim factory on the outskirts of Phnom Penh where jeans are made for every imaginable brand: from JCPenney and Kohl’s to Simply Vera by Vera Wang and J Lo.

Walking down the assembly line, you see hundreds upon hundreds of women, heads down doing fast repetitive motions, backs crunched just like ours over laptops. The sheer volume of stuff, and noise from the machines was overwhelming. All in our quest for cheap jeans.

The denim distressing unit was especially eye-opening. “All the cuts, wear marks and washes are done by human hands, and these tasks are clearly physically demanding and even dangerous, from all the spraying of harsh chemicals”, noted Casey.

“As soon as our tour ended my brain was overwhelmed with what I had just seen; how could one pair of jeans sell for $20 and have had so many hands work to produce them; the math behind where the money goes does not scream fair at all.” – Casey

That evening one of the denim makers invited us to her home for dinner in a nearby slum. We traveled in the open air truck with her, where passengers need to balance sitting on both ends to ensure the truck did not topple over. Makers in Cambodia have lost their lives in trucks just like this one, which thousands use to get to work everyday. 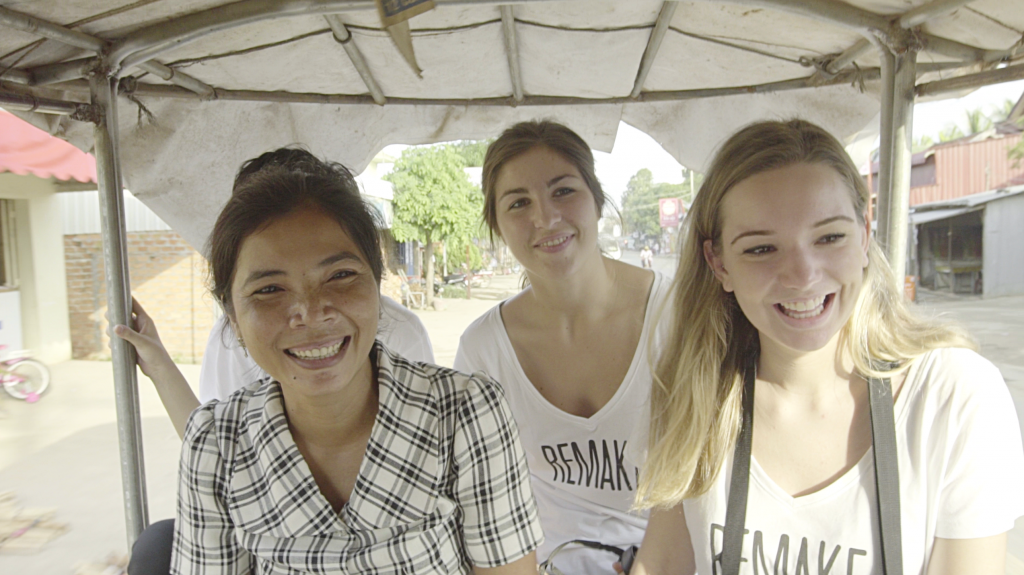 “I started working when I was 15. Since then I’ve worked at several different factories. My husband is sick, so my $140 a month salary support’s my whole family. I work at the factory all day and then work a second job as a tailor at night. I want my daughters to learn English and go to a school like Parsons. I’ve actually seen New York on TV and maybe someday I can come visit. I want young designers to know about my life. I have suffered but I feel stronger having met my sisters from NYC.” – Sreyneang

Sreyneang’s home was no bigger than two dining tables pulled together, the floor just dirt and the roof sheet metal. Her husband, children and neighbors all crowded in to meet us. Her home may have been small but her heart was huge. When we sat down to eat together, she kept offering us bottled water she had bought for us and took only two spoonfuls of rice. Insisting that we, her neighbors and even the stray dog and cat that stopped by had something to eat first. “A truly inspiring, loving, and kind soul, I haven’t stopped thinking about her and I don’t think I ever will.” – Casey 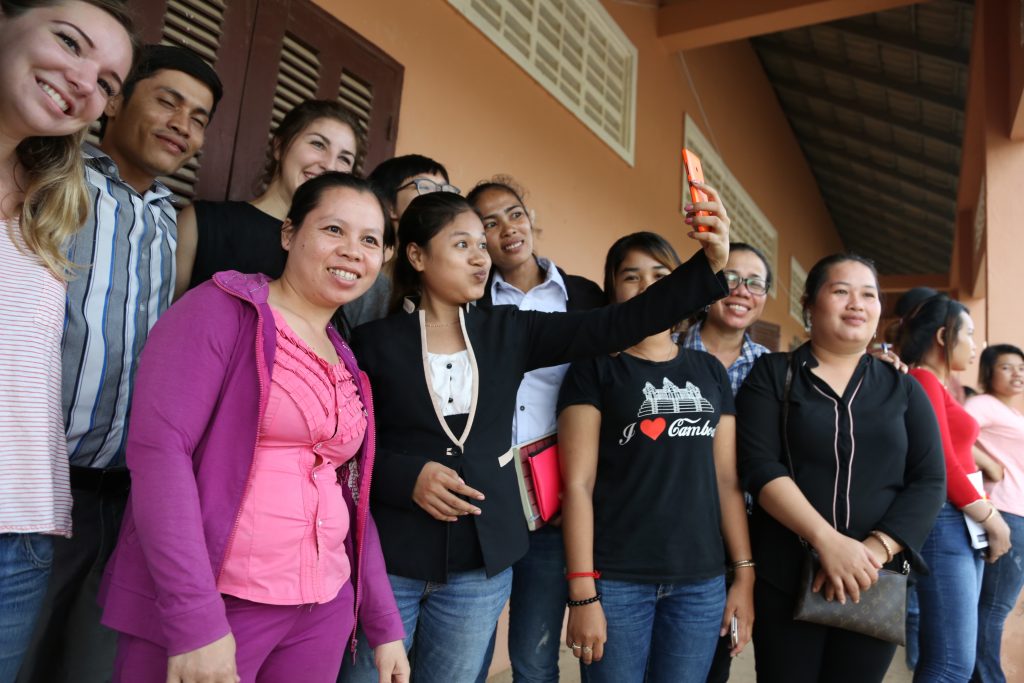 Few things are more powerful than a room full of women who have something to say. We traveled 2 hours outside of Phnom Penh along dirt roads to a small school in the middle of rice fields, one of the few safe places makers are able to unite to talk about their rights without the police breaking up the meeting.

This gathering was hosted by Solidarity Center, to help makers fight for their rights. We learned that when big factories agree to cheap prices and tight deadlines, they often can’t meet these demands. So they ship orders off to fly by night operations–dark, dingy subcontracted factories where the conditions are the worst.

The women we met had sneaked out labels from the brands they illegally sew for including Zara, H&M and Tommy Hilfiger. It was dangerous for them to sneak these photos and labels out but they did it anyway, in the hope that we and you as readers would help them, to ask these brands pressing questions about why they worked such long hours for so little. 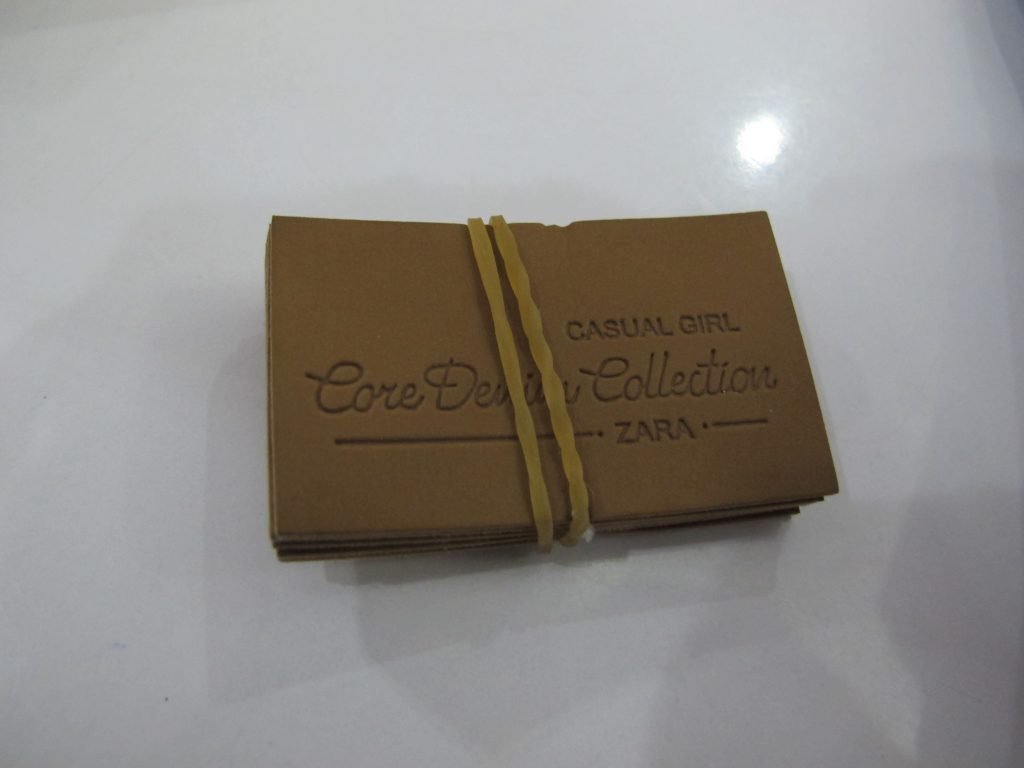 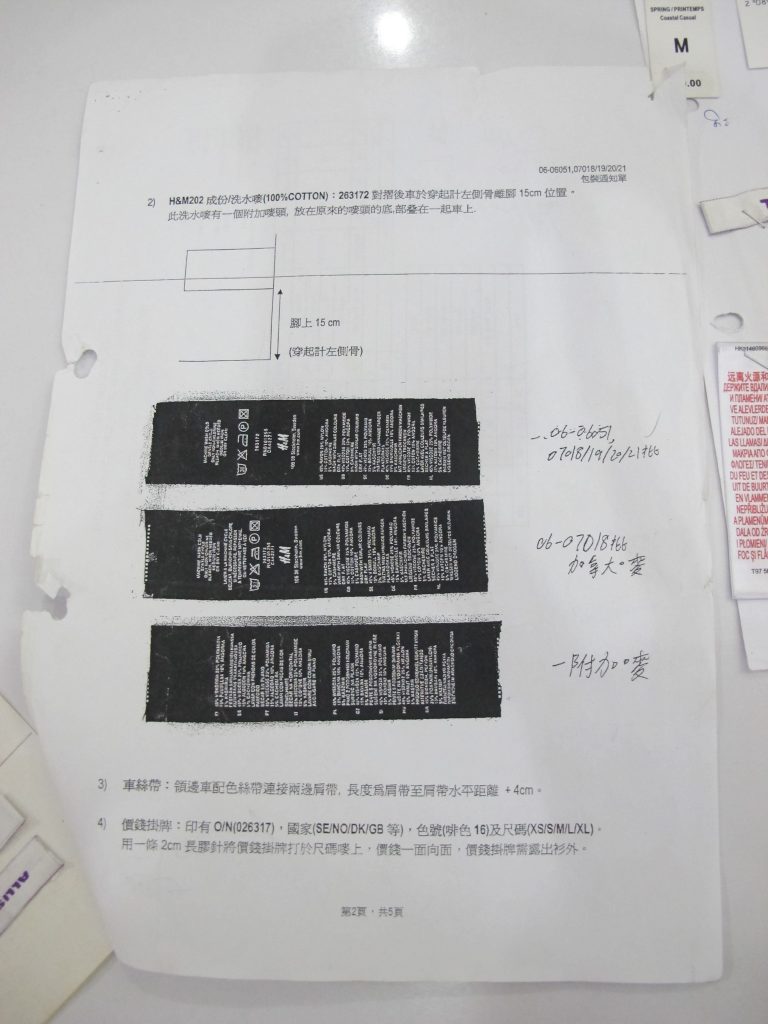 Some of these women made less than a $100 a month despite working all day long. Others noted that they were forced to take pregnancy tests and if it was positive, they were fired.

We learned that some factories pop-up during holiday rushes, then shut down to avoid paying the makers anything once the order is filled. Some of these women had been sleeping outside factories to get their back wages to afford food and rent. One of Solidarity Center’s incredible staff leaders Somalay, said to us, “We will never stop. We will fight.” She cares and risks her life, because she’s been there, she used to be a garment maker herself. 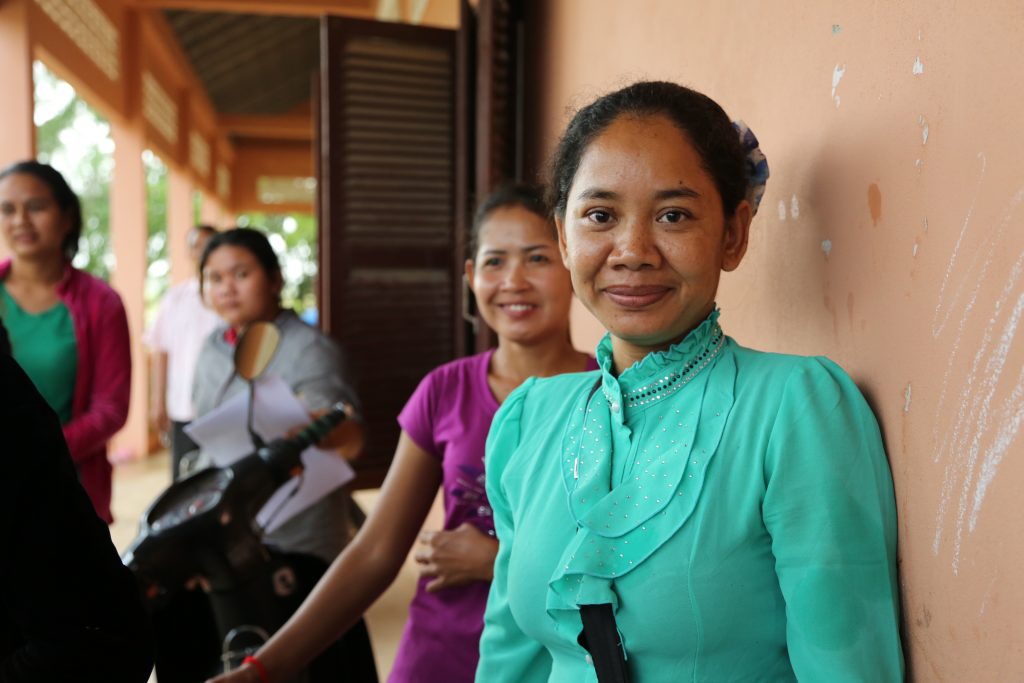 “I wanted a better life for myself and my family so I took this work at a subcontracted factory. But life has become harder. I get paid per 12 pieces, but if there’s even one single error in the batch, I don’t get paid at all. I used to make a new design every 2-3 months. Now, it’s two to three new designs per month. The designs are more complicated but we get no training. It’s harder to meet the quota. Sometimes I cry because I fear I won’t meet the quota and get paid. I hope you will help me and my colleagues by spreading our stories to the world. You being here, listening, makes me hopeful.” – Wong Char

“I definitely felt a lot of girl power throughout the day, both from our own all female crew and the makers we met. These women are not playing victims, but fighting for their rights and educating themselves on their rights. Some of the makers dressed up in professional attire, including blazers and heels and every person had a pen and paper they were furiously taking notes with. Speaking with Wong Char, I realized that the hopes she has are fundamentally no different from mine–for a fulfilling life.” – Allie

Journey #5 ended with see-you-laters, not goodbyes. Our designers and makers became friends on Facebook WhatsApp and promised as sisters to keep in touch and fight together to make fashion a force for good.

It takes 100 pairs of hands to bring each of our clothes to life. Next time you go shopping, we hope you think of Ny, Sreyneang and Wong Char and their dedication to our fashion. We hope you join our movement – to say no to fast fashion and buy better from brands like Tonlé.