Ayesha: 2020 has been a year like no other. In Spring all our lives were upended. We were seeing a rise of authoritarian governments around the world, the pandemic was spreading rapidly and the economic fallout was swift. Like many of my friends I was struggling with juggling working from home, trying to Zoom school my children, raise enough money to keep Remake going, while trying not to doomscroll constantly and worry about the state of the world.

In running a series of emergency calls with garment worker organizers and labor activists as early as March, something Nazma Akter from the AWAJ Foundation said stuck with me: “Sister, people will die of starvation before COVID-19 kills us.” Within Remake, nothing felt more urgent than for us to ensure that citizens, allies and the press focused on what was happening to the world’s poorest and most vulnerable workers, the backbone of our beloved fashion industry.

Elizabeth: I, like Ayesha, was home in March and filled with a sense of dread, watching my beloved New York City consumed by the coronavirus, wondering what would happen to my family and my career. Working side-by-side with Remake and people all around the world on the #PayUp campaign filled me with hope again, more hope than I’ve had in years. It has shown me what is possible when citizens come together; we are courageous and powerful beyond imagination. That is why I am so excited to share with you all the next phase of #PayUp, the powerful global mass-movement you’ve all helped build, called PayUp Fashion. 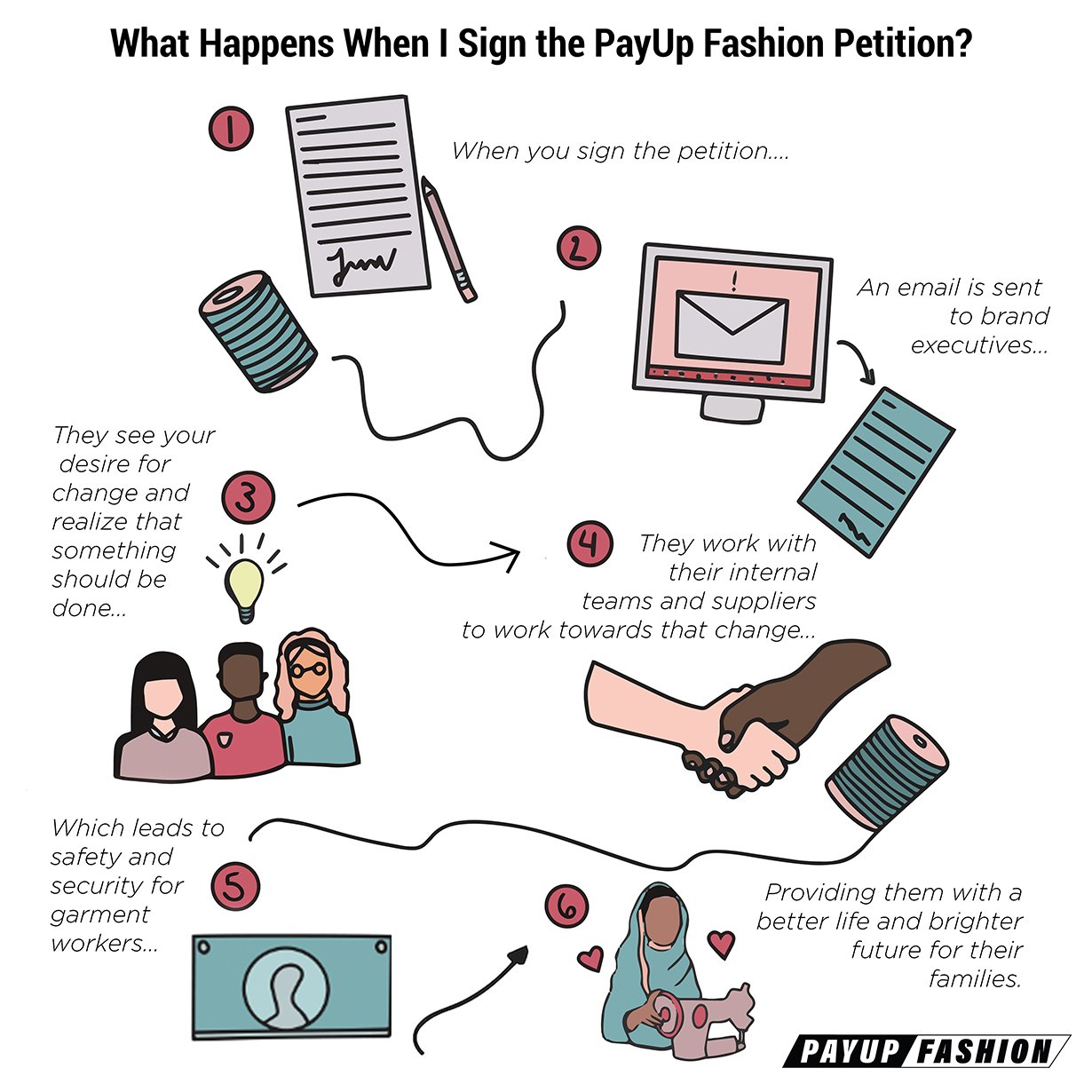 The #PayUp movement was borne from the fashion industry’s catastrophic decision to refuse payment for completed orders heading into the COVID-19 pandemic. Stores were closed and online sales were sluggish as we sat in sweatpants at home. As sales started to plummet as early as March of 2020, global brands refused to pay for an estimated $40 billion worth of finished goods that garment workers had spent untold hours sewing.

Millions of garment workers were laid off globally without pay, as a direct result of the cancellations, sending them into the gravest economic crisis of our lifetimes without their paychecks or any savings.

This was, simply put, wage theft, a heist from the West, with brands shoring up their own balance sheets and cash reserves in the name of “supply chain savings” to handsomely reward their own executives and shareholders at the cost of garment workers who already live paycheck to paycheck.

Galvanized by timely research published by the Center for Global Workers’ Rights at Penn State, a global network of organizers and advocates joined up to demand that brands pay factories the billions they owe. My faith in humanity was restored when the #PayUp movement went viral, with citizens all around the world and fashion greats like Amber Valletta and Cameron Russell using the #PayUp hashtag. Over 270,000 people signed on to the first #PayUp petition. To date, the #PayUp movement, using relentless protesting and petitioning, and citizen and worker solidarity, has helped to recoup $22 billion owed to garment factories worldwide from over 21 major fashion companies including Zara, Gap and Next. 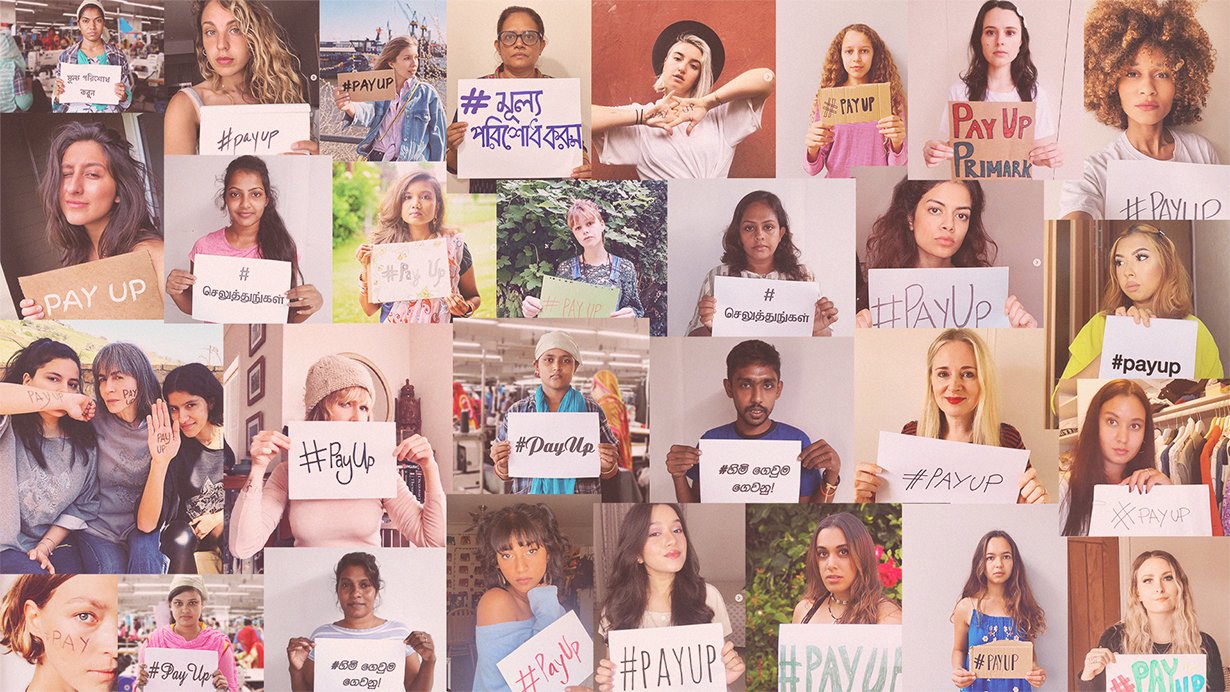 Without the help of #PayUp, millions more workers would have lost their jobs without pay or any sort of social safety net. Its success is because of people like you in our community, who signed a petition, fired off a #PayUp tweet, or protested outside stores in solidarity with garment workers.

But our work is not done. It has only just begun.

Brands have been quick to threaten legal action, turn a blind eye to state sponsored violence against workers and go into PR hyper drive. This week brands like Bestseller and Li &Fung, who still refuse to #PayUp, will be celebrated at the Copenhagen Fashion Summit as strategic partners to create a bold new vision of sustainability.

Missing from all of these fashion conversations of building back better post COVID-19 are workers whose wages and safety continues to be in a free fall. But if we have something to do with it, CEOs of fashion brands and the billionaires behind them, cannot just slip back into polite society after the devastation they have caused.

COVID-19 has cracked wide open the fragile nature of the fashion industry: the world’s 70 million garment workers’ toil for poverty wages while sewing clothes for the world’s wealthiest brands. During this crisis, workers have died of COVID-19 while making 3 cents per mask in Los Angeles. They have been being imprisoned and beaten for demanding their wages from the Maldives to Myanmar. Faced starvation in Bangladesh, Ethiopia, Pakistan to India and beyond. The $2.5 trillion fashion industry is failing its most essential workers, the women and men who make our clothes. It does not have to be this way.

A quarter century of voluntary commitments have made one thing abundantly clear. Fashion brands and retailers are unable, on their own, to address the urgent need for human rights in today’s fashion system. Let’s be honest. The core function of business — as the cancellation crisis has proven — is to protect profits, shareholders and cash flow over human lives. Any roadmap to fashion’s recovery must instead center on garment workers’ needs.

The coronavirus pandemic is the most devastating crisis in our lifetime, but I do sincerely believe it is an opportunity to build back better. The PayUp Movement has shown what’s possible when workers and citizens reign in corporate power. We get things done.

I am therefore so delighted share the launch of the next phase of PayUp Fashion, a campaign to overhaul the apparel industry, pass much-need laws and regulations, fight for better wages, purchasing orders, and contracts — and above all put workers at the center of a stronger, more equitably fashion industry. Our vision for the future is condensed into 7 Actions, and unlike most sustainability efforts that are brand led and paid for, have been written by garment workers and labor organizers and supported by citizens and fashion lovers around the world. This campaign will take all of us coming together like never before to fight for the long-haul for a vision for change we all believe in. For too long brands and retailers have controlled the conversation about human rights and our planet. This Roadmap is what we the people want: 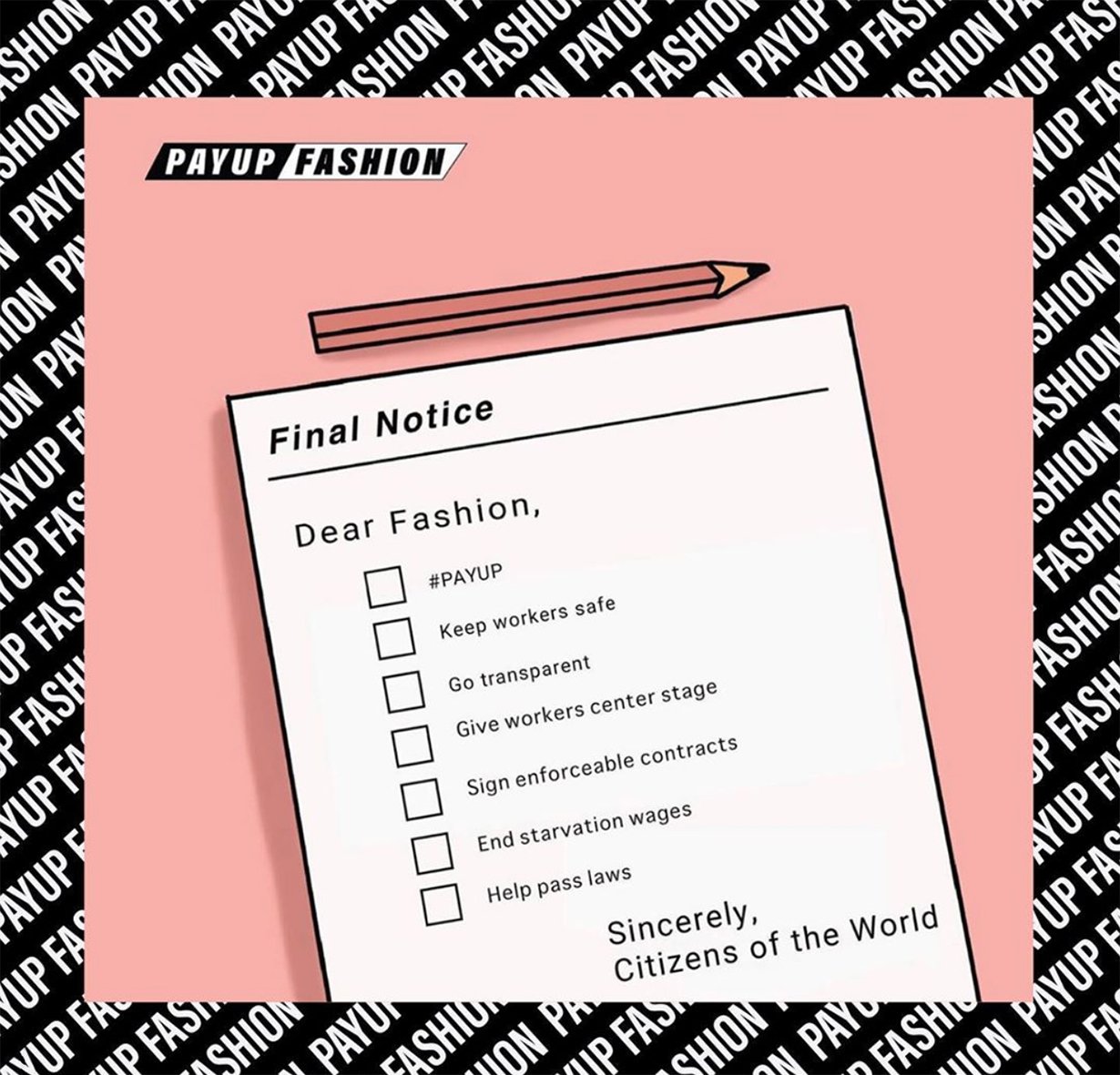 None of the 7 demands are radical. But they can no longer wait.

So go on. Sign the petition. By signing, you are part of the growing movement for a just and resilient fashion industry. And in the coming weeks and months, there will be ample opportunity for our community to help us meet the 7 Actions and build a worker-centric future for fashion. The first step is to sign on for reform. It is time for us as workers and citizens to take power back.