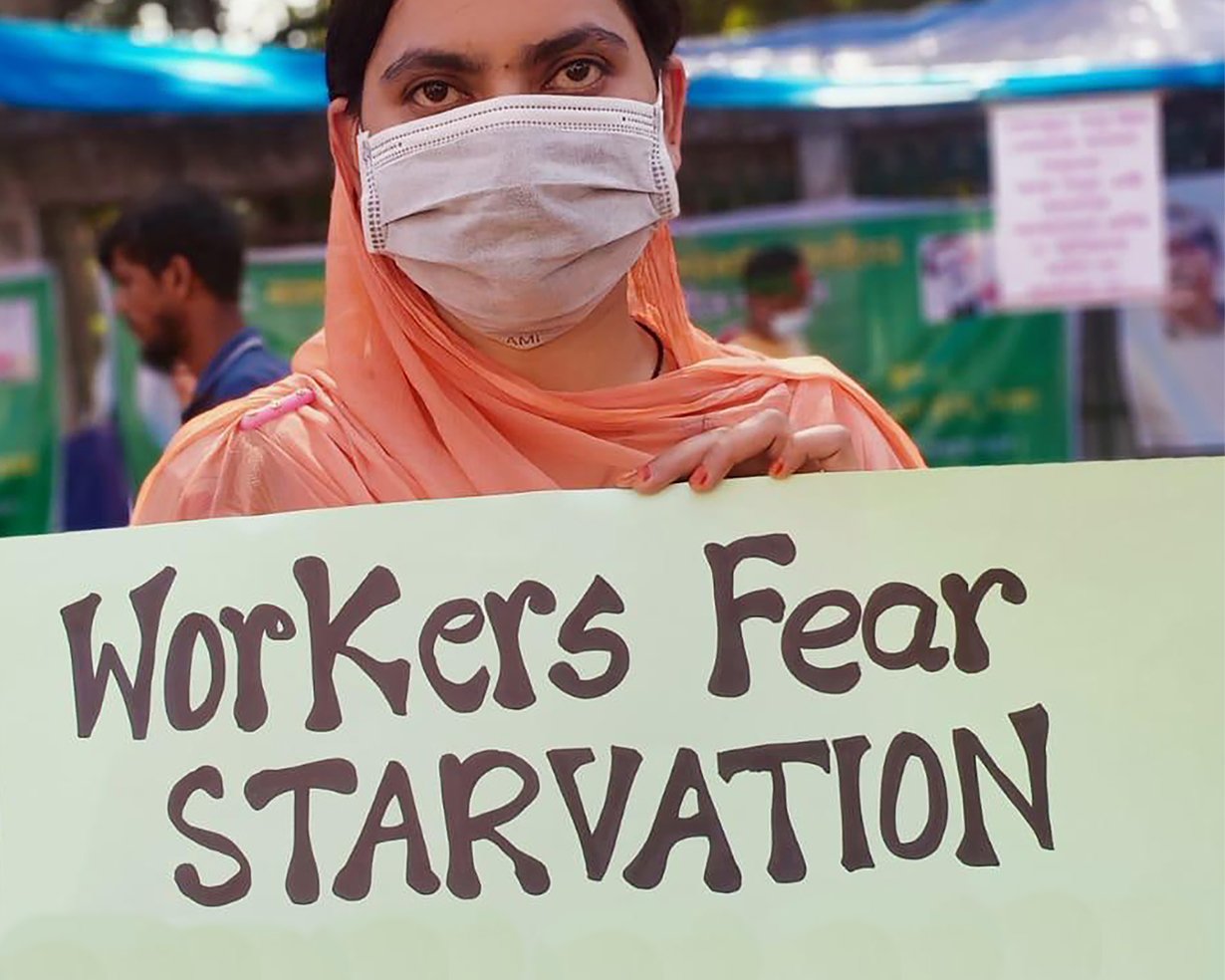 Apparel brands and retailers have dealt with the Covid-19 crisis by halting new orders, stopping payment for orders-in-progress, and changing payment terms with suppliers. As a result, garment factory owners have been scrambling to find ways to pay their workers, leaving garment makers — the people who make our clothes — more vulnerable than ever to “widespread hunger,” according to a November report from the Workers Rights Consortium (WRC).

The WRC report is based on a survey of 396 garment makers from Bangladesh, Cambodia, El Salvador, Ethiopia, Haiti, India, Indonesia, Lesotho, and Myanmar. Those surveyed work, or have worked, in factories that produce clothing for some of the world’s most affluent apparel brands and retailers. These garment makers, the large majority of which are women and family breadwinners, have endured layoffs, temporary employment suspensions, and/or wage reductions.

In most countries with significant apparel export economies, workers are legally allowed a portion of their wages if suspended, and are entitled to full severance pay if their job is terminated. Thirty percent of the suspended workers surveyed by WRC received no money during the suspension period. Others were given varying percentages of their pre-pandemic income. Only 24% of the workers who lost their jobs received full pay.

“Before the pandemic, I bought fruit for my child regularly. But after losing my job, I cannot buy even fish or meat. Egg is a luxurious food for us now,” states a Bangladeshi worker.

One Cambodian garment worker said she is owed more than £1,500 in back pay. “Before I lost my job I could just about make the money stretch, but when the factory closed I was left with nothing. Now my husband and I are just eating rice so my daughter doesn’t go too hungry.” 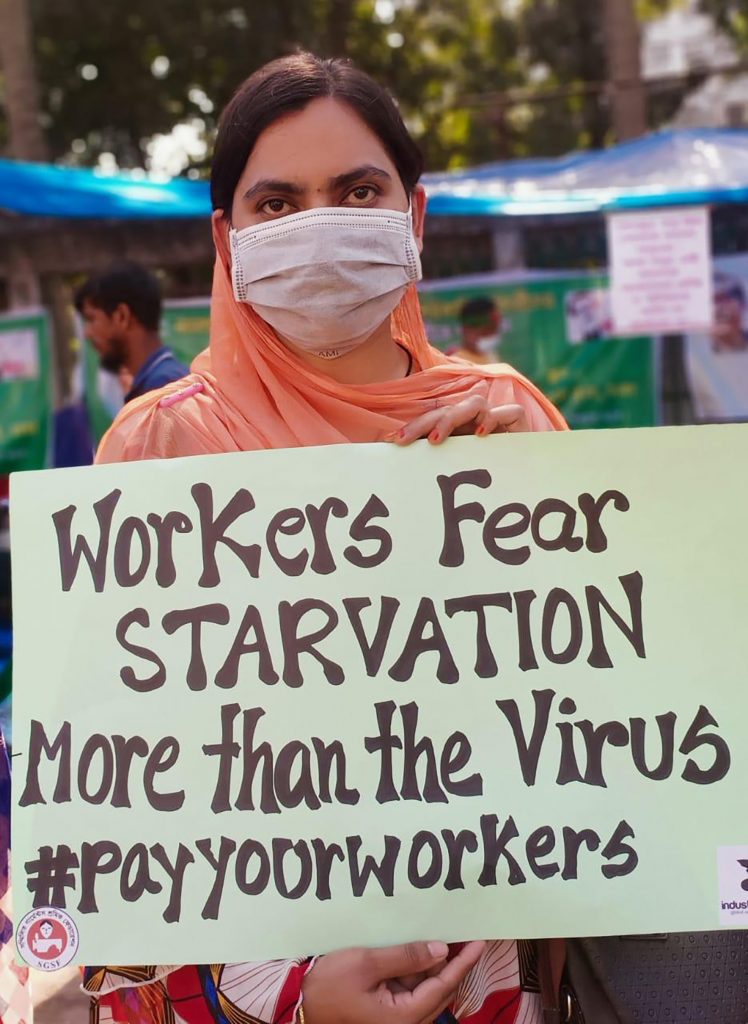 Sixty percent of the surveyed workers are still employed. They now take home 71% of their pre-pandemic wages — an average of $147 per month in U.S. dollars — which is barely enough to survive, let alone buy nutritious food for themselves and their families. A majority can no longer afford the groceries they used to buy for themselves and their families pre-pandemic. Most often, workers do without meat but many also forgo other staples, including vegetables and grains.

“Potato is the only vegetable we can afford now;” remarked a Bangladeshi worker employed by a factory producing for Orsay.

Among the workers surveyed, nearly 70% state that they or members of their household have been forced to skip whole meals during the pandemic or reduce the quality of their food. Eighty percent of workers with dependent children skip meals, eat smaller portions, or give more expensive, nutritious foods to other family members.

To put food on the table, 75% of the workers have had to borrow money since the start of the pandemic, and in doing so, have accumulated debt in addition to hunger.

The report shares that “[o]ne worker from Indonesia who sews clothes for Nike has to choose between going hungry and going deeper into debt.”

Debt has become a crisis for global garment makers. “Many workers now face high levels of interest with little prospect of earning enough to repay loans, a worrisome dynamic in light of the well-documented links between debt, high interest rates, and vulnerability to severe forms of exploitation,” the report declares.

Brands Need to Step Up to Protect Makers

The workers in this survey have sewn or continue to sew apparel for brands and retailers like H&M, Gap, Adidas, Nike, Children’s Place, Gildan, Walmart, JC Penney, and Kohls — some of the most lucrative brands on earth, even during the pandemic.

“Brands bear substantial responsibility for the destitution garment workers are facing [during Covid 19],” says Penelope Kyritsis, director of strategic research at WRC and one of the authors of the hunger survey. “The fashion industry has made its overseas workers exquisitely vulnerable to this crisis by paying them chronically low wages, leaving workers unprotected and unable to absorb the pandemic’s economic shocks. Unless something is done to help, we are likely to see tremendous suffering across global supply chains.” 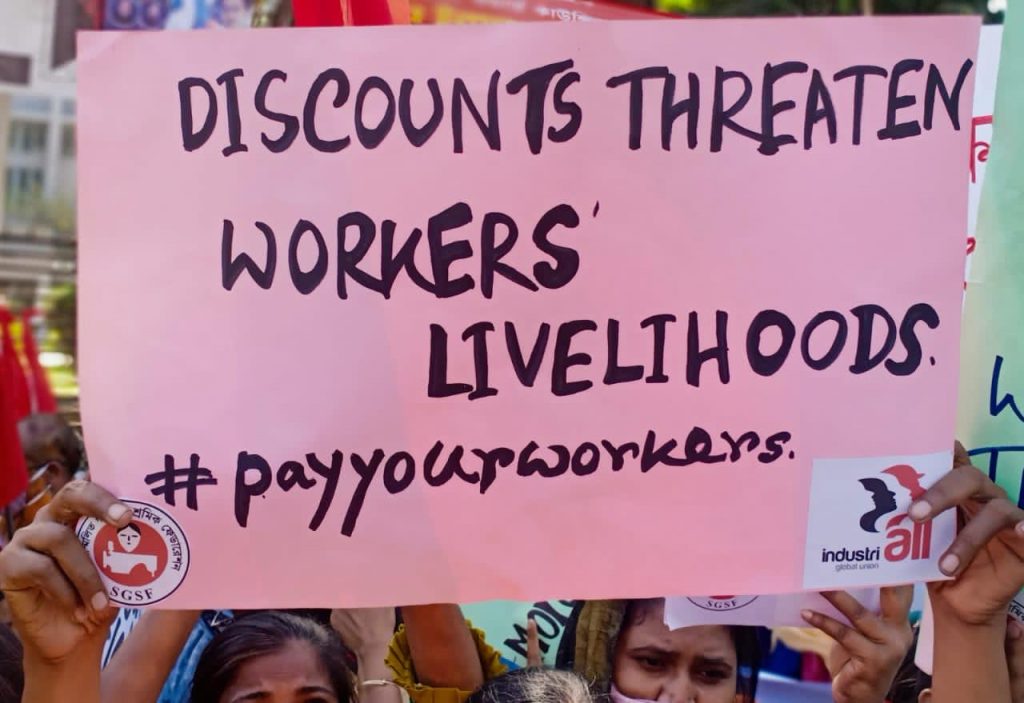 During the 2020 holiday season, “what is most concerning is that brands are now seemingly exploiting their suppliers’ desperation for orders by demanding lower prices and slower payment schedules, increasing the downward pressure on wages and making more job losses inevitable,” says Penelope Kyritsis. Brands are also insisting on faster turnaround schedules.

Some brands are participating in an ILO led garment sector initiative known as “Call to Action,” to show their commitment to helping workers during the crisis. But the WRC survey points out that these brands have made no commitment to any specific level of financial support. The “Call to Action” is non-binding.

Instead, PayUp Fashion in demanding that brands share their profits to help provide garment workers with owed severance and direct relief. If brands do not take these measures during this crisis, hunger, a danger to global garment makers’ health and dignity, will only get worse.