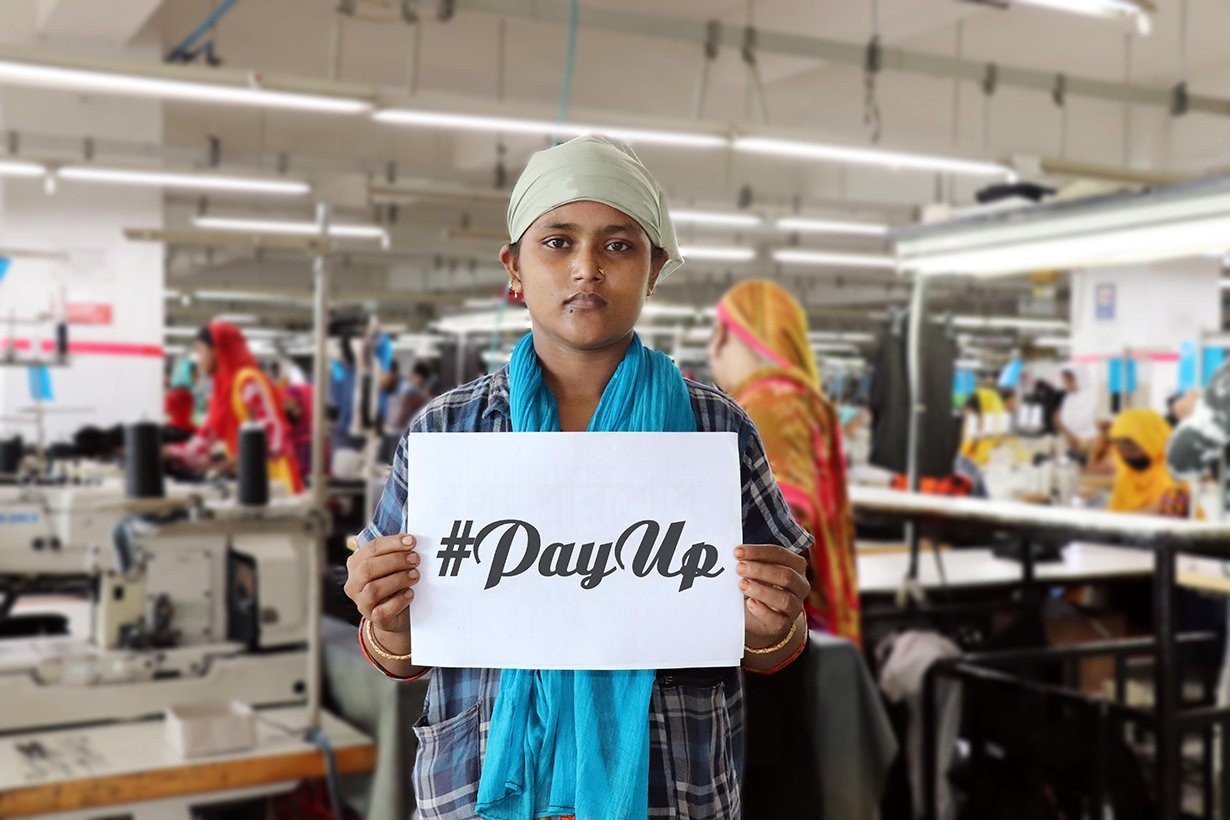 It’s been around eight months since the global fashion system shut down, paralyzed by the pandemic, but the impact of the virus was felt along the apparel supply chain even before the first wave of infections were recorded outside of China. The trouble began when the supply of fabrics made in China dried up, leaving manufacturing hubs like Bangladesh — which employs around 3.6 million people — without materials to fulfill orders. As the virus spread across the world, Western brands began to cancel or suspend their orders from suppliers in developing nations, effectively abandoning 70 million vulnerable workers around the globe during the biggest crisis of our lifetime.

Remake’s PayUp Fashion campaign has been fighting for the rights of these workers, the vast majority of which are women, by petitioning brands to pay their bills, take responsibility for all of the workers in their supply chain, and commit to permanent systemic changes to ensure that it won’t happen again. Over 270,000 people signed the original #PayUp petition on change.org, leading to over half of the $40 billion owed in unpaid wages being released. Remake hopes to reach one million signatures with the next phase of its campaign.

Still, after months of campaigning, $18 billion is yet to be paid by Walmart, URBN (owner of Urban Outfitters, Free People & Anthropology), luxury giants LVMH and Kering, Kohls, and Amazon. Jeff Bezos, now worth $200b, could personally cover this bill 11 times over. 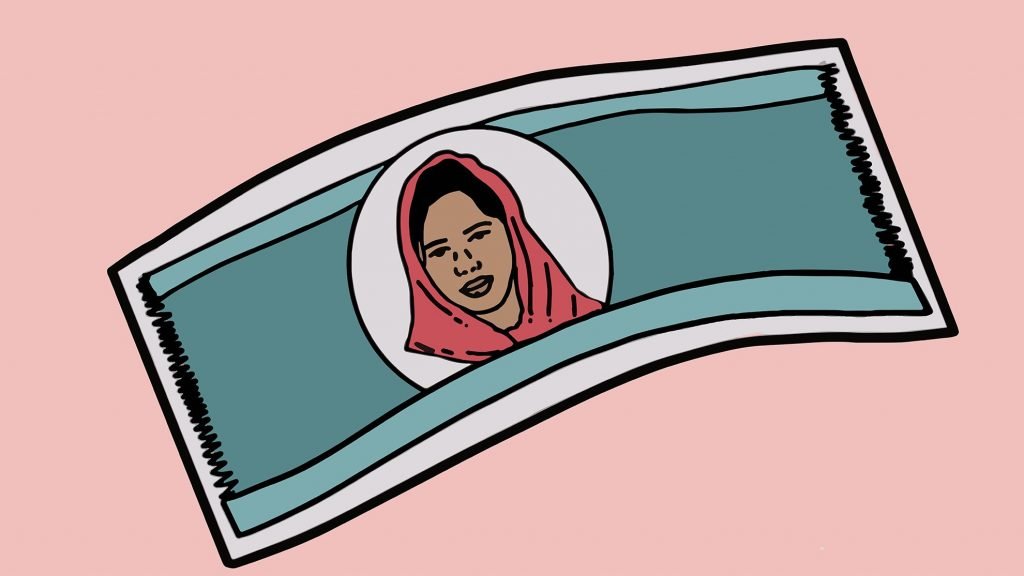 “What does it say when the world’s largest companies look at this situation, that they’re going to lose money, and their first instinct is to figure out how they can push that financial loss onto the people who are least able to absorb it?” asks journalist Elizabeth Cline, who has been covering apparel supply chains for several years.

In September, the PayUp Fashion movement published a manifesto of 7 actions, co-created by garment workers, union leaders, and activists, that offer a framework that could revolutionize garment manufacturing from the top down. Action 2 of the demands is to Keep Workers Safe. “We organized the demands by urgency,” says Remake founder and co-author Ayesha Barenblat. “Keeping workers safe through the length of the pandemic is what is most urgently needed, because we’re still seeing many brands pushing their factories into increasing financial peril and their workers toward starvation and homelessness.”

So what does keeping workers safe entail?

The action point is broken into three key demands.

“Keep Workers Safe is really addressing the economic fallout from the pandemic,” says Cline, who is also a co-author of PayUp Fashion. “We’re already seeing a huge increase in the number of people being pushed back into poverty in the developing world.” Nazma Akter, a former child worker, labour organizer, and founder of the grassroots labour rights NGO Awaj Foundation, believes that around 50 percent of garment workers in Bangladesh are waiting to be paid their full wages. “There are many workers waiting for their pay,” she says. “The workers who got fired, they didn’t get any of their salaries, and the ones that are still working have had their salary reduced by 35 percent.”

Akter says the cost of living in Dhaka is high, especially for garment workers, who earn minimum wage — around 3000 taka or $35 USD a month — far below the living wage of 5000 taka. With reduced wages, even those who kept their jobs are struggling to survive.

“The European and American companies should be responsible for these workers, because profit goes to their countries, they make millions — billions — but what are our workers getting? They have no jobs and no food.”

Ashila Dandeniya, the founder of Stand Up Movement Lanka, the only organization in Sri Lanka that represents the country’s garment workers, believes that there are 100,000 people still waiting to receive pay. “When production stopped mid-March, even though they’d worked half the month, they weren’t paid anything,” Dandeniya says. “Usually garment workers receive an annual bonus in April, but they didn’t get that either on the basis that they hadn’t worked the last two weeks of March.”

This was compounded by the fact that, because garment workers were considered key workers, many were forced to quarantine in cramped factory accommodations. “They were unable to return to their hometowns on time, which meant they were trapped in their hostels for a really long time,” says Dandeniya. “As a result, they couldn’t get food most days and the government authorities didn’t take it seriously.” After protests held by the Stand Up Movement gained global media attention, workers were allowed to return to their homes. “That was only a fraction of the problem, there are other issues like the salary cuts and unpaid wages, none of those were addressed.”

The hypocrisy of wealth distribution is not lost on Akter and Dandeniya. In March, Kohls cancelled $150 million worth of unpaid orders in Bangladesh and Korea, weeks before it paid $109 million to shareholders. “Don’t ask for discounts from your suppliers. You’re giving discounts to your consumers and making them happy, but nothing is free. Someone has to pay, and that’s our workers,” Akter says. “Brands aren’t taking any accountability, they’re just saying ‘Our business is bad, our stores are closed, we don’t have any profit.’ They’re always thinking about profit, profit, profit, but not thinking about our worker’s lives.”

“Keep Workers Safe is about making sure that workers have a safety net through the crisis like most workers in countries where brands are headquartered,” says Cline. “We believe it’s the responsibility of brands to guarantee a safety net to workers, no matter where they’re located.”  Social safety nets include emergency relief funds like the Supply-chain Relief Contribution, launched by a coalition of groups including the Asia Floor Wage Alliance, which is demanding that brands contribute 2 percent of total annual sourcing to support their factories.

Another social safety net that PayUp Fashion is asking brands to publicly agree to is the Clean Clothes Campaign’s COVID-19 Wage Assurance. By making this pledge, brands agree to “support stronger social protections for workers by paying a price premium on future orders into a guarantee fund reserved for severance and outstanding wages in cases where employers in our supply chain have gone insolvent, or have terminated workers,” the agreement reads.

13 small independent businesses like Outerknown, Nisolo, Known Supply, and Behno have all made a wage assurance pledge to their workers — which begs the question, why can’t these larger and more profitable brands do the same?

Eliminating the industry-wide norm of price wars, which consequently means factories are run on the lowest possible margins, is also crucial to creating a social safety net for garment workers. “To make one t-shirt, brands go to a number of factories and ask, ‘Who can give me the best price? Who can make me happy?” says Akter. “You need to account for the raw materials, the worker’s salary, the worker’s wellbeing, this kind of unhealthy competition is making worker’s lives worse.” Now, with millions of garment workers unemployed, this had created a “crisis of desperation” that will only make working conditions worse, says Cline. “If you’re a brand, that’s good news for you, because it’s a willing and desperate workforce that will work for any amount of money,” she says. “One thing that we’re trying to do with PayUp Fashion is intervene and create binding agreements between brands and factories that don’t allow that race to the bottom and the downward spiral to exist, because I really do think working conditions are going to get worse if we don’t intervene.”

Freedom of association, i.e, the right to belong to and be protected by a union, is under threat. “Unionized workers are increasingly being targeted and fired, under the guise of COVID-19 order contractions globally,” says Barenblat. “We have reports of unionized workers, pregnant women and women overall being fired, verbally, and physically assaulted for demanding what is legally owed to them and factories rolling back on labor protections in the desperation to keep orders flowing.”

Both Dandeniya and Akter have seen unionized workers fired in recent months, laid off for speaking out about their rights.”There were a huge amount of people who have raised their voices and were organizing, but those workers lost their jobs because the companies want to be able to exploit workers,” says Akter. She says that unions provide a critical line of communication between factory owners and workers, allowing them to negotiate policies, compensation, and the wellbeing of workers. “Unionization in factories is the best way to maintain a high level of labour rights and respect for worker rights,” says Cline. “We don’t want to see worker rights eroded. Once you bust a union or you fire unionized workers, it sets labour rights back quite a lot.”

There are dangerous consequences of union busting that directly impact garment workers, including working conditions in factories going unchecked. “Because of COVID-19 restrictions, brand representatives aren’t in the factories monitoring how workers are being kept safe,” says Akter.

“When we asked them to come and have a meeting, they said it’s strictly prohibited by their headquarters. So they aren’t allowed to go there, but these poor workers are? It just shows that these workers have no value to the brands.”

It’s fair to say there’s a long way to go before garment workers around the world are given the safety, respect, and dignity that they deserve, but the PayUp Fashion campaign has already proven that citizen activism can bring about monumental change — $22 billion worth, to be exact. One by one, brands are committing to paying their bills, and that’s largely in part to people signing the PayUp Fashion petition and protesting on social media. “I feel more hopeful about systemic reform than I have for a very long time,” says Cline. “Seeing the incredible community of PayUp Fashion advocates that has formed around the world — in London, Toronto, New York, Dhaka — it’s a global movement.”

“I can’t say that change isn’t possible, no. Things are bad, but why do you think we’re working so hard?” says Akter. “I’m optimistic things will change, if I wasn’t, why would we put in all this effort? We’re fighting because we want to change garment worker’s lives.”

Action Two of the PayUp Fashion demand list, Keep Workers Safe, is one urgent demand out of seven in a framework that has the potential to transform the lives of garment workers around the world, at a critical time when the future of industry is being reimagined. “Our framework of putting workers first disrupts any brand-led or paid-for ‘future of fashion’ conversation, voluntary initiatives have not made sufficient progress,” says Barenblat. “We believe the only way to build the industry back better is to center garment workers. Now is the time for us as workers and citizens to take power back.”