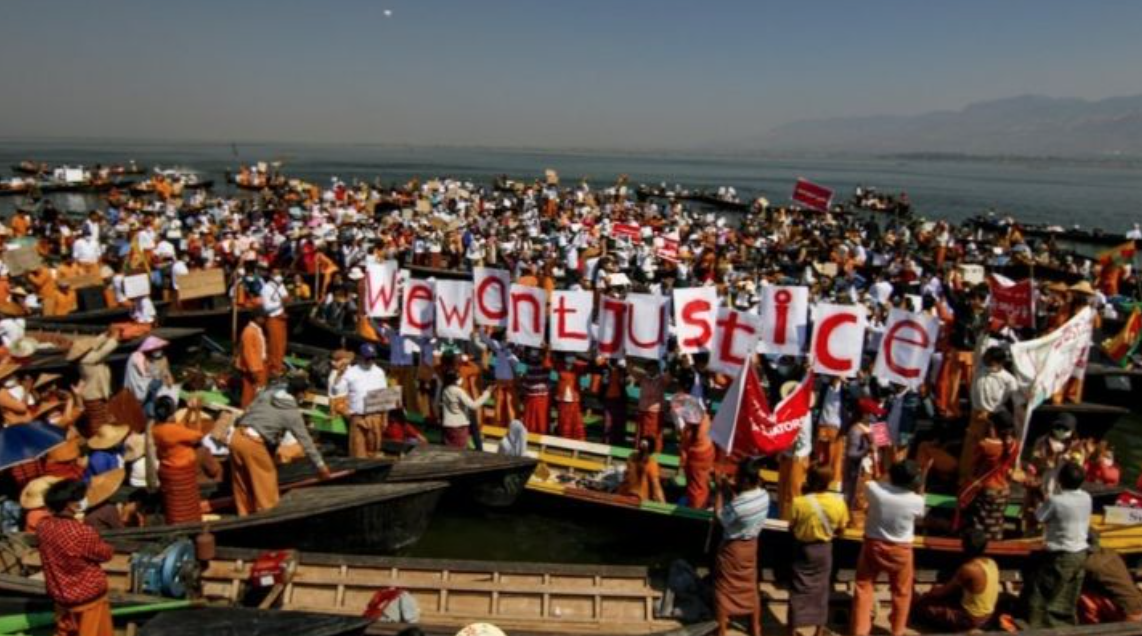 On March 14th, nearly 60 workers were massacred in Hlaingthaya, the main garment zone in Myanmar. This occurred when the military marched hundreds of tanks into Hlaing Tharyar, trapped workers inside, and massacred dozens and dozens of workers.

A labor researcher in Myanmar shared the following statement with Remake: “Workers are very worried about their safety if they are on the road, because the military is shooting everyone on the road, so safety is a big issue [garment workers] face even to go to work.”

The Myanmar military coup has cost countless garment worker deaths. While governments play a leading role in upholding human rights globally, fashion brands also play a leading part in perpetuating these atrocities by not speaking out, which has led to hundreds of deaths and eroded democracy globally.

The last 48 hours have been the bloodiest yet in Myanmar, with women garment workers leading the pro-democracy fight. We spoke with women union leaders on what they expect of international fashion brands and how the world can support Myanmar garment makers.

“During COVID and the economic slowdown, fashion’s most essential workers have been dealing with the worst humanitarian crisis of our lifetime. This includes reduction in wages and an increase in gender based violence. With a rise of authoritarianism and dictatorships around the world, we are seeing a rollback on garment worker rights and the very safety of workers erode globally,” stated Ayesha Barenblat, CEO and founder Remake.

Hlaing Thaya is the main industrial zone with over 300 garment factories right outside Yangon. While the protests have been peaceful, safety remains an enormous concern for those in the area. One garment worker shared with Remake:

“We sew for Mango, Zara, Primark. Mostly European brands. There has been a lot of union solidarity. Military has been shooting us with live ammunition. At the last peaceful protest on March 16th, 60 people died, thousands were injured and arrested. This has had a big impact on the factory zones with many factories shutting down. Safety to get to work has been a big concern. We want international brands to push suppliers to stand with workers. Many workers have fled to rural areas. For workers who have fled to rural areas without pay there are concerns of hunger.”

The protestors are mostly young women. They are protesting peacefully. They have, at great personal risk, been fighting for democracy only to be met with bullets, arrests, and deaths. They have received no financial support from brands. Some factories are shut down, other foreign-owned factories are open and are demanding that workers come to work and do overtime despite safety concerns. Even though brands talk about human rights, they failed to support freedom of association during COVID-19 when workers protested for wages. They have failed to support the pro-democracy fight currently being fought in Myanmar. H&M, Muji, Bestseller, Mango, Primark, OBS, and Zara have all been named as brands currently manufacturing in the Myanmar region.

The aforementioned labor researcher in Myanmar shared the following: “Workers need support; they need medical, food and financial support — with some workers not even receiving their salaries from the last two months.” He continued: “Before the military coup, Myanmar workers had already faced larger issues due to the COVID 19 pandemic. So when faced with the coup, we thought that the employers, the brands that garment makers worked for, would provide aid. Instead, they didn’t say anything about our demand for democracy or need for human rights. Until now, we still have not received any aid or meaningful support from brands despite the current conditions we’re facing.”

It’s urgent now that the media continues to report on the human rights violations happening in Myanmar and the violent ways that peaceful protests are being suppressed. Furthermore, fashion brands must be held accountable for their silence and perpetuation of the situation which has now cost human lives.

An organizer for the Solidarity Center stated:

“I think it’s hard to say that [brands] don’t already have quite a bit of blood on their hands […] They were silent when it really mattered. And now over 500 Myanmar people are dead because of it.”

While workers and unions begged for weeks for the international brands to stand up for their right to participate in the strikes without being fired, between February 15 and March 15, only one brand issued any type of statement saying that workers should be able to participate in the civil disobedience movement without fear of retaliation or being fired.

Workers in Myanmar are currently owed back wages, with some factories having shut down. They need money to keep protesting. You can support the strike fund organized by the APALA, the Asian Pacific American Labor Alliance. All of the funds are going directly to worker-led organizations in Myanmar.

You can also help by putting pressure on the aforementioned brands (H&M, Muji, Bestseller, Mango, Primark, OBS, and Zara) to do the following:

1) Brands must urge their suppliers to support workers’ rights to protest and participate in the civil disobedience movement against the military coup.

2) Brands must halt orders from factories that support the military regime.

3) Brands must ensure that worker wages and severance are paid through the crisis. Many workers who are yet to be paid have fled to rural areas and are in need of food.