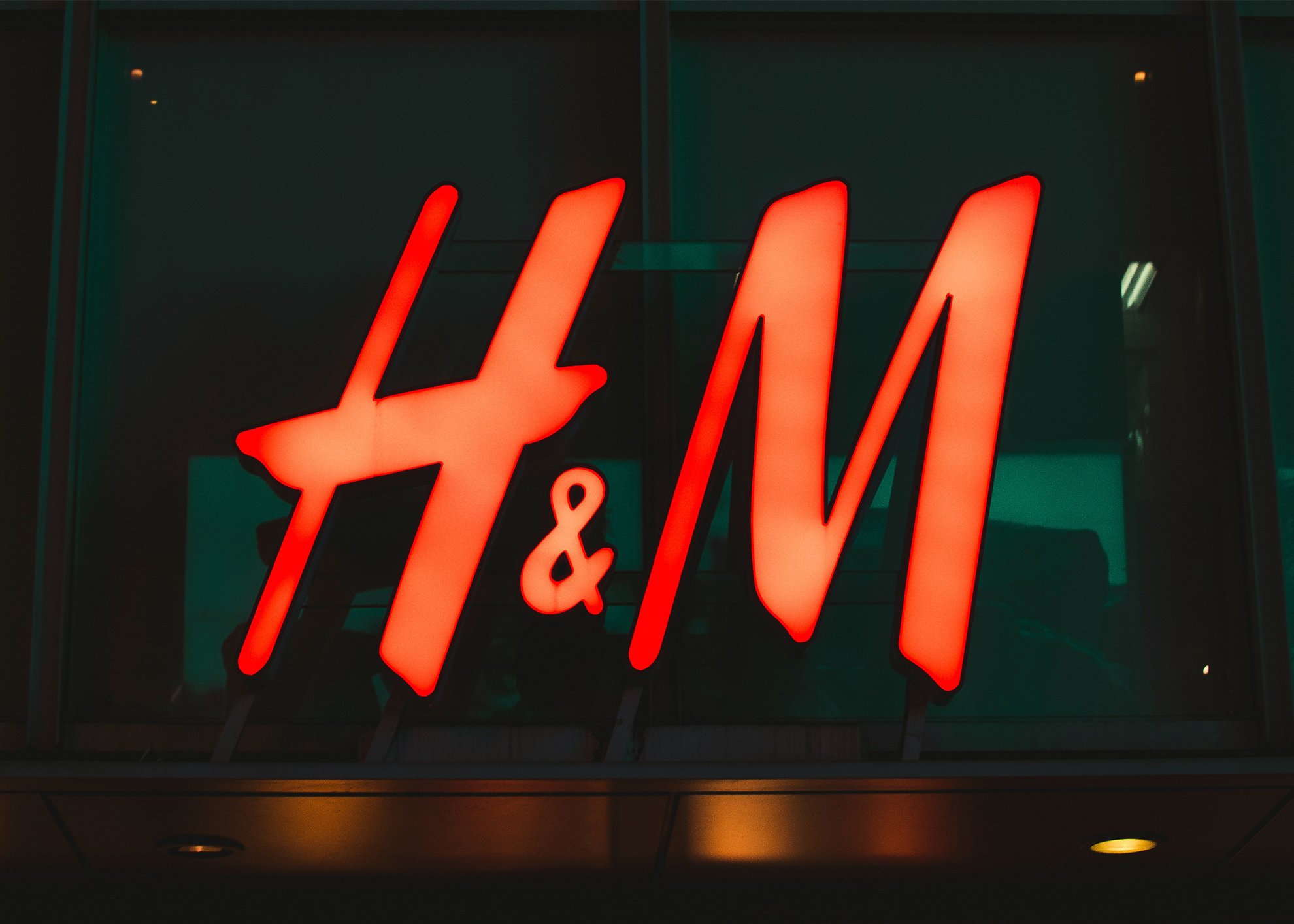 Jeyasre Kathirvel, a 20-year-old Dalit garment worker, never came home from her job at H&M supplier Natchi Apparels in Tamil Nadu after allegedly being raped and murdered. Her family last saw her on January 1, when she reportedly was asked by her supervisor to report to the factory. Four days later—January 5—her body was found by farmers in a nearby wasteland. The heavy rains had exacerbated the rate of decomposition, and because of this, her family may never have a full explanation of what happened to her.

A report about the case from the Asia Wage Floor Alliance alleges that Kathirvel was killed by her supervisor. The Asia Wage Floor Alliance also reported that he confessed to the murder and rape of Kathirvel and is currently in custody, awaiting charges. While the full account of her attack remains unclear, her family alleges that she was raped at her supervisor’s house and then poisoned and strangled. It is also alleged that Kathirvel’s supervisor had an accomplice.

Co-workers of Kathirvel reported that there was a history of sexual harassment at the factory and that Kathirvel was a repeated victim of harassment by her supervisor. According to a statement from the Asia Wage Floor Alliance related to the death of Kathirvel:

“Seven women workers at Natchi Apparels have testified that Jeyasre was sexually harassed multiple times by the supervisor. They have stated that the supervisor had a history of sexually harassing women and that he is not the only supervisor or manager who has indulged in these actions. Women workers have pointed out that there are many instances of sexual harassment and violence in the factory – including name-calling, slut-shaming, bullying, beating, and assault.”

Proving the prevalence of harassment remains a challenge for female garment workers at Natchi Apparels. While the factory has cameras to capture workers who may arrive late or loiter, employees reported that cameras were not installed on the factory floor to capture any wrongdoing. The Asia Wage Floor Alliance reported that Tamil Nadu Textile and Common Labour Union (TTCU) logged an anonymous complaint from one worker about the prevalence of harassment at the factory and the battle women face in proving these assaults. The garment worker stated:

“CCTV cameras are only kept in the corridors or the entry of the factory or close to the bathrooms. This is to see who all enter the factory, to monitor if workers are loitering around, or to see how many minutes we are staying away from work to go to the bathroom. They use it only to scold us if we spend too much time away from work. There are no CCTVs in the workplace as such – this is where all the harassment happens. So, there is never any evidence of the sexual and physical harassment that women workers suffer on the factory floor. Managers use this opportunity to torture us.”

In addition, the factory also reportedly has an immense imbalance of power related to gender roles. While 90 percent of supervisors are men, the garment worker employees that they oversee are almost all women (90 percent). Only 10 percent of women hold powers of authority. In the complaint to the TTCU, the anonymous employee at Natchi Apparels detailed how this patriarchal dynamic leaves many female workers feeling like they have no choice but to accept harassment and abuse:

“…the gender ratio is very skewed in the factory. There are hardly any women supervisors and managers in this factory. Most workers, on the other hand, are young women and many are migrants, who are staying away from their families for the first time. They have no proper support system within the factory and have no access to prevention or grievance redressal mechanism for sexual harassment. They are scared to complain against the managers as they are girls from poor families. They worry that they will lose their jobs and will be unable to feed their families if they complain.”

Harassment isn’t the only alleged abuse happening in the factory. Other workers reported to the union that they weren’t paid minimum wage or that they were not compensated for overtime. There were also reports of burdensome production demands.

TTCU is calling on H&M to take responsibility for the alleged workplace abuses taking place in the factories and to provide assistance and reparations to Kathirvel’s family. The union demands the following:

We, the undersigned organizations and individuals, demand immediate action from H&M to ensure adequate and prompt reparation for the rape and murder of Jeyasre Kathirvel, whose supervisor at H&M supplier Natchi Apparel has confessed to the authorities on committing the crimes. We also demand H&M to guarantee the safety of Jeyasre Kathirvel’s family and co-workers who are currently facing threats; and to take immediate measures to end the culture of gender-based violence and harassment in Natchi Apparel (SF No 470/2, Kaithayankotti, Vedasandur 624711). 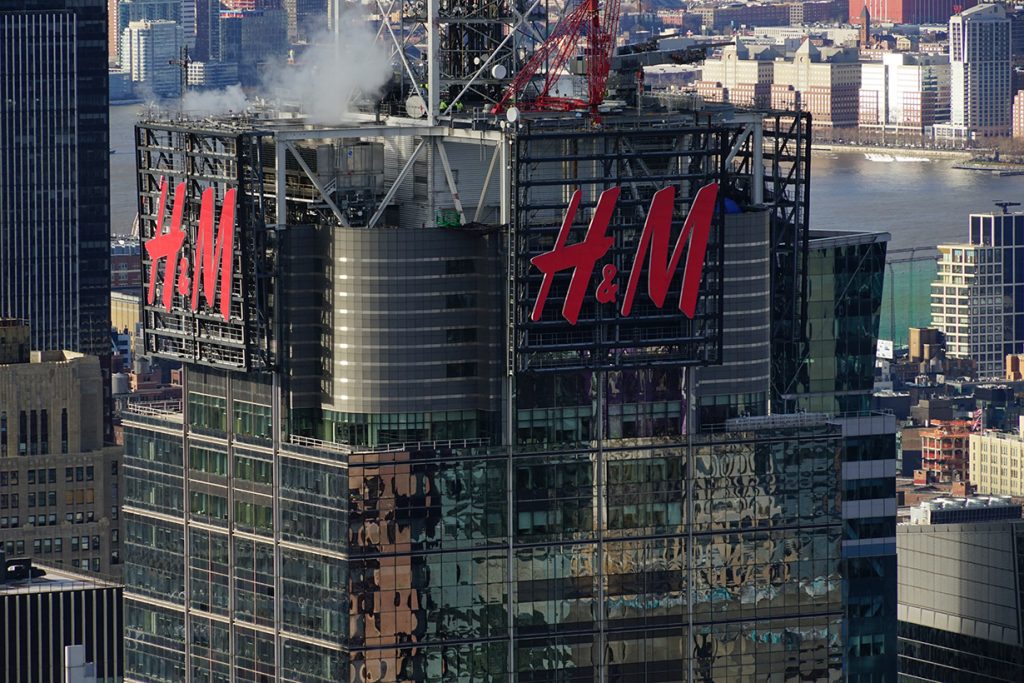 On H&M’s website, the company makes clear that fair and equal treatment is a priority. The site states: “We want to be part of a fashion industry that provides fair jobs and equal treatment for everyone. We respect human rights, promote inclusion and champion diversity throughout our supply chain − and call on others to do the same.”  And under a subsection addressing working conditions, H&M’s site also includes the following: “As a large global company, we have responsibilities for all of our 177,000 employees — but also for the 1.6 million textile workers employed by our suppliers. We want everyone to be treated with respect and work in a safe and healthy environment.”

However, despite their public statements, H&M’s actions over the course of the pandemic have demonstrated little interest in providing long term safety and protection to its garment makers. Remake has reached out to H&M multiple times to discuss the brand’s willingness to commit to Action 2 of the PayUp Fashion demand list, which requires brands to Keep Workers Safe by helping to provide direct relief to garment workers and paying into a severance guarantee fund. These two actions remain critical in the wake of Covid-19, as the pandemic has left millions of garment workers with food and housing vulnerability as brands cancel orders and layoff makers around the globe.

In response to Remake, H&M has shared the following:

“There is an evident need for structural change in some textile-producing countries, in particular those with weak social protection systems. Therefore, advised by the ILO and global trade unions, we will continue our work to support social protection, freedom of association, and strengthening the processes where wage negotiations between the parties on the labour market can take place. As you are already aware of these commitments are formalized in our Global Framework Agreement with global union IndustriALL and IF Metall, as well as through our active engagement and as signatories to the ILO Call to Action.”

Unfortunately, the ILO Call to Action has moved too slowly to provide the urgent financial relief necessary to respond to this crisis on hand and to meet immediate humanitarian needs. To date the ILO Call to Action has released an insufficient sum of money, with only four nations having yet received any money at all. In Bangladesh, where H&M has one of the largest footprints, the relief (€115 million/$130 million) works out to just $32 per garment worker, approximately a third of the poverty-level minimum wage per month. In Ethiopia, where H&M actively sources, relief amounts to €4.9 million which is $0.53 for each of the nation’s 92,000 workers. In Pakistan, India, and Myanmar where H&M have suppliers, no money has been released at all. What’s more, none of the frontline labor rights groups that Remake is in contact with report having received any of this relief so far.

If H&M truly intends to treat factory workers with respect and dignity, as well as provide them with a safe and healthy environment that is free of harassment and abuse, it must do more than talk: it must provide action. Remake stands in solidarity with the TTCU and demands that H&M come to the aid of Kathirvel’s family and help end the abuse at Natchi Apparels. Remake will also continue to press H&M on their commitment to protecting their garment workers through direct financial relief.

After the rape & murder of an Indian garment worker earlier this year, 90+ intl. labor groups came together in support of a binding agreement with @HM @Gap @PVHCorp & their supplier, @EastmanExports to end the supply chain model relying on systemic GBVH 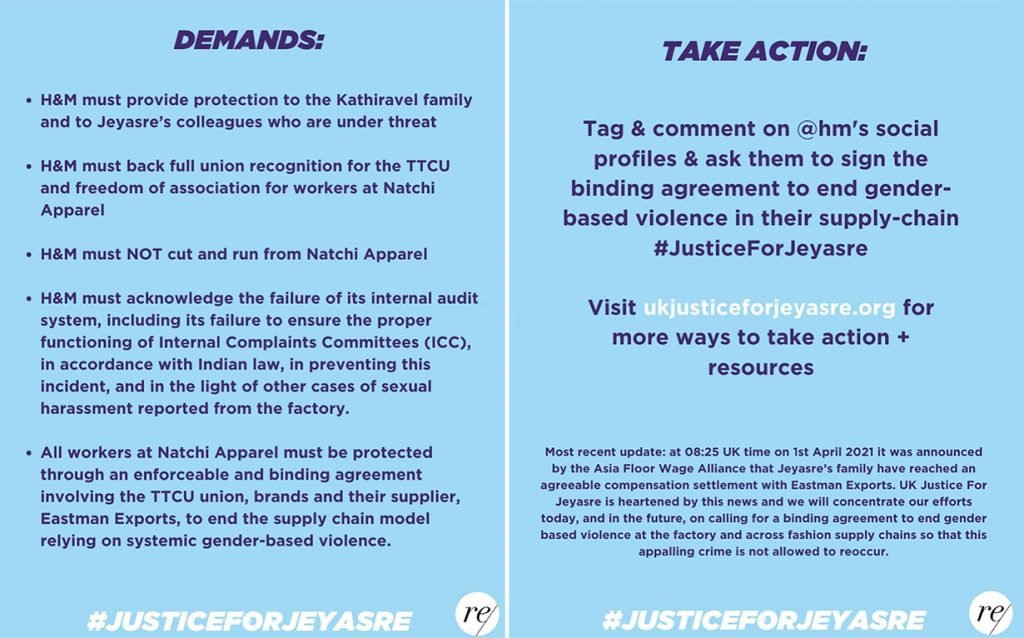