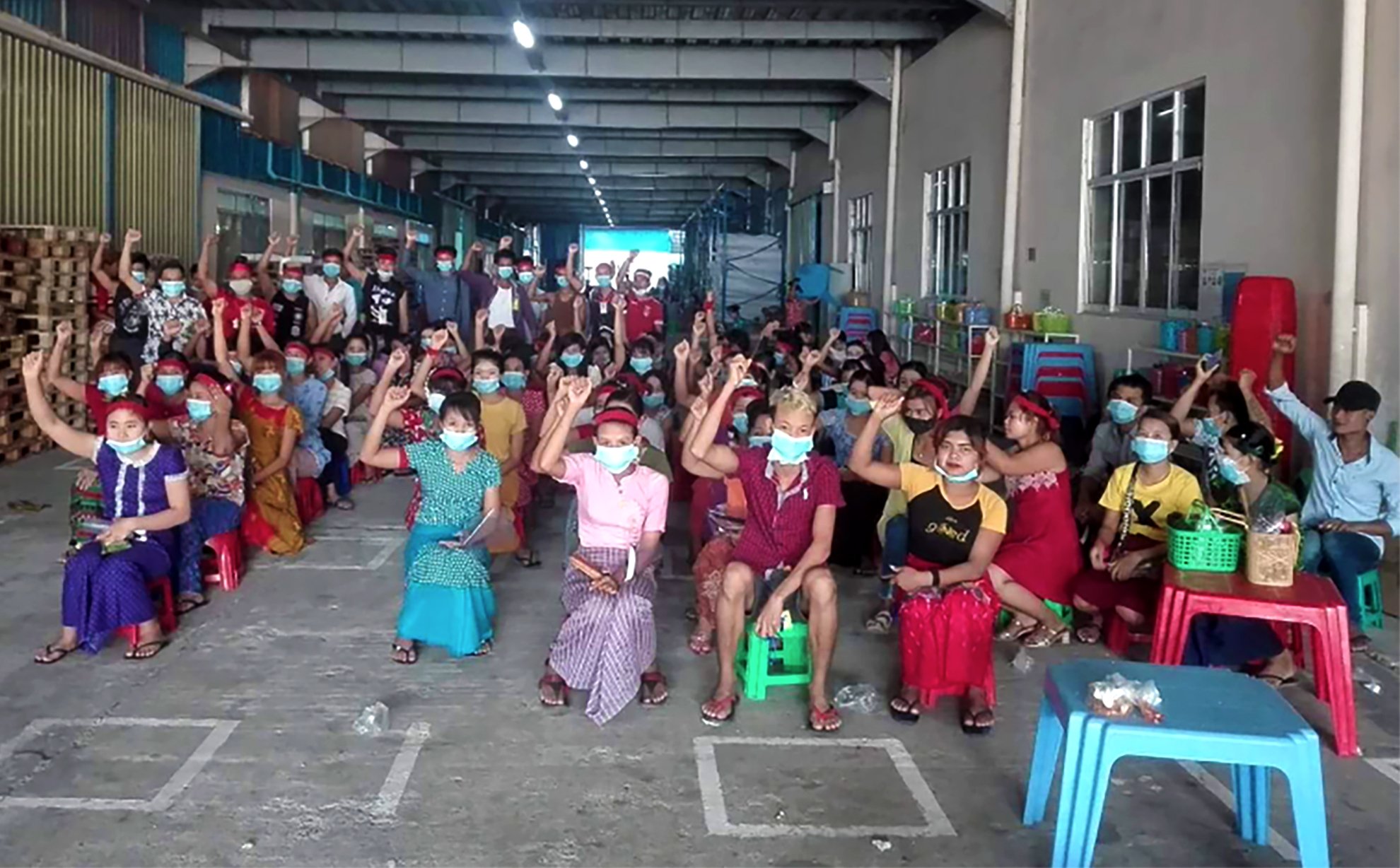 The #PayUp campaign has taken off, pushing over a dozen major apparel brands to take accountability and compensate vendors for cancelled orders. Most recently, retail giants Gap and Levi’s made the promise to pay in full for all orders they had previously paused or cancelled as a result of COVID-19, brining the estimated total dollar amount unlocked by the campaign to a whopping $22 billion — recouping over one-half of the original $40 billion worth of garment orders that were originally cancelled as a direct response to the pandemic.

Though Bangladesh has received the most attention as being the center of the greatest heist in fashion’s history, the cancellation of orders and mistreatment of garment workers isn’t isolated to the Bangladeshi population. Rather, garment makers around the globe are suffering as a result of brands’ bad behavior.

Reports of vendors illegally laying off workers and targeting union members are plenty, and apparel giants like Primark are shirking responsibility while misleading the public about their commitment to makers. Ultimately, COVID-19 is being used as an excuse by brands to act outside of the law and worsen already existing workers’ rights violations.

In acts of desperation, garment workers are being driven to protest for their lost wages, as they remain on the brink of food and housing insecurity with no access to savings, severance, or unemployment benefits.

Knowing that COVID-19 can be spread by close contact, these protests pose a health threat to makers, who often don’t have access to healthcare. Without access to PPE, makers are risking their lives to demand their wages, because without these wages, they cannot afford daily meals to sustain themselves and their families. While COVID-19 is a risk to those protesting, the loss of wages is a more imminent one.

In Myanmar, protests started in March as a response to mass layoffs. The Myanmar Times reports that at least 10,000 workers, primarily in the garment manufacturing industry, have been laid off as a result of COVID-19. To protest these layoffs, thousands of garment workers went on strike, demanding not to be dismissed.

In the months since protests began in Myanmar, some success has been seen. According to labor organizer Andrew Tillet-Saks (@AndrewTSaks), a two-week union sit-in won garment workers a wage bonus, put an end to verbal abuse from managers, and granted union recognition.

Despite this success at the K-World Garment Factory, union members throughout Myanmar are still being targeted for layoffs and violence. Tillet-Saks also reported that workers at a Primark supply factory have been protesting after union leaders were fired and assaulted. Although workers reached out to Primark, they have not received assistance.

Employers appear to be using the “COVID-19 layoffs” as an excuse to dismiss union members. Garment workers at factories that produce clothing for Primark and Zara (owned by Inditex) formed a union. Just days later, 100 workers were laid off, mostly union members or supporters. These layoffs were said to be pandemic-related and necessary to enforce social distancing. However, according to The Guardian, after firing 107 workers, 200 non-union workers were transferred from a different factory to replace them. Zara and Primark have failed to take responsibility, distancing themselves from their suppliers and offering weak statements about mediation.

Cambodia is yet another example of workers’ legal rights being ignored when they should matter most. The Ministry of Labor and Vocational Training announced that businesses closing for pandemic-related reasons are not required to pay workers “damages” or “prior notice payments.” This ruling only considers the effects COVID-19 has on business owners, while garment workers still face detrimental consequences. This ruling also makes it much easier to terminate workers. Over 150,000 workers and 400 factories have been suspended as a result of COVID-19.

Members of the Cambodian Confederation of Unions (CCU) protested, stating that they are owed benefits. Workers were suspended in May, and by June many factories declared bankruptcy. They had promised to pay benefits, but continued to push back the timeline and shrink the benefits package. The Ministry of Labor and Vocational Training responded to the protests with a letter warning the president of the CCU, Yang Sephorn, to stop inciting protests or her union would be sued. Sephorn told the Phnom Penh Post, “I still stand by members demanding their benefits. The ministry issued the warning letter to me because it affected its interests. I am angry because I used my right to help my members facing injustice.”

On July 9, 2020, the Labor Ministry said it was processing worker suspension payments for 30,189 workers. The government has distributed payments to out-of-work workers 12 times since suspensions began. However, the CCU claims that some workers have only received $20 from the government, and is asking the government to process payments with more urgency.

Garment workers at a Gokuldas Exports (GE) factory, a factory that manufactures for H&M, were illegally laid off in June. Despite H&M’s commitment to honor their orders and the factory’s assurance it will not close, 1,200 workers were laid off without notice, and 900 of these workers were affiliated with the Garment and Textile Workers Union, according to the union affiliate New Trade Union Initiative. H&M sources from 6 GE-owned factories, but this was the only majority-unionized factory and the only factory to close. Targeting this factory calls into question H&M’s proclaimed commitment to freedom of association. Workers have been protesting the 1,000 illegal layoffs outside of the factory.

Even though these garment workers were laid off without the mandatory one-month notice, they are still owed half of their wages for the month of June. These wages were due July 7, 2020, and still have not been paid. Despite these clear violations of workers’ rights, the state government has taken no action against the factory.

To avoid compensating workers as the law requires, men affiliated with GE have been discovered pressuring women to resign. The New Trade Union Initiative shared with Remake that men have been going to workers’ villages, telling them the factory will not open again, and pressuring them to resign. The men have been caught on video threatening the women that if they do not resign the managers will make sure no other factory hires them. If these women resign, they have no legal recourse and will receive no compensation.

(Video: Three men identifying themselves as Mohan, Dileep and Ramesh reached Aravu village, Pandavapura Taluk, Mandya District. 7 women workers travel to Gokaldas Exports ECC-II unit for work everyday from this village. These men called the workers on their mobile phones demanding to meet them claiming to be representatives from the ‘head office’ of Gokaldas Exports. Upon meeting the workers, they started threatening them to resign. Workers were told that the factory was never going to open and the only way out is to resign and get away peacefully.)

H&M is the only brand working with this supplier. H&M has the power to ensure the factory reopens and wages are paid. Instead, H&M is attempting to distance its brand from the suppliers and ignore the blatant violations of its own sustainability commitment.

In Karachi, Pakistan, police intervention has put an end to workers’ protests. After 15,000 workers were fired from one factory, workers began protesting for better wages and safer working conditions. Workers lost their jobs and the expected holiday bonuses which allow them to return home for Eid, the holiday marking the end of Ramadan. Hundreds of workers were gathered outside of the factory when police reportedly shot at unarmed protestors and charged at protestors with batons. Nasir Mansoor from the National Trade Union Federation said, “Due to police firing, workers dispersed and there was panic among workers.” He also shared that a number of workers were arrested.

Because many workers lacked official contracts, they could easily be laid off. As a trade unionist, Mansoor shared what he sees as the most important items for workers to achieve: written job contracts, improved health and safety in the workplace, and democratic union and collective bargaining rights. He added, “From the workers point of view, job protection was top priority.”

Without contracts, the resources to pursue legal recourse, and now without the ability to protest safely, there is little garment workers in Pakistan can do in response to labor violations.

When the stay-at-home order went into place in Sri Lanka on March 20, 2020, garment workers were unable to return to their hometowns. Instead, they were forced to stay in hostels near the garment factories. In March, factories closed or laid off workers. Some workers have received half wages during the closure, but many have not received any of their regular wages. Even without work, the national lockdown still prevented the workers from returning to their hometowns.

Posted by Standup Movement Lanka on Friday, May 8, 2020

Because the workers are not registered residents of the areas they are residing in during the lockdown, they do not qualify for relief aid. Without their wages or aid, workers cannot afford daily meals. A local labor NGO, Standup Movement Lanka, has been open and providing aid and food to displaced workers, but founder Ashila Niroshi reports that they do not have enough resources for everyone who has been laid off.

Niroshi also explained how COVID-19 has been used to excuse illegal labor practices: “Factories are consulting the government in order to change some rules and regulations [that directly impact] the social protection of the workers.” Factory owners have been working with the government to amend multiple labor laws, easing the responsibility of employers. They have been lobbying to ease the Termination of Employment Act, which protects workers from unfair termination and requires employers to fairly compensate workers.

Employers are also using the pandemic to remove the requirement to compensate laid off workers. Because of the already low wages, these workers have no savings and rely on this compensation to survive. The Employees’ Provident Fund (EPF), which is the largest social security protection for workers in Sri Lanka, is under attack as well. Factory employers have received permission to re-examine the requirements of the EPF and lessen the employer’s commitment.

The erasure of these protections have real and immediate consequences. Niroshi states, “Many workers whose jobs have been terminated [are facing] various challenges to survive.” Legal protections that workers have spent decades fighting for have been tossed away during a time when workers need them the most.

Here’s How You Can help garment makers now

Demory Hobbs is an aspiring public relations professional and recent American University graduate. She believes in the power of storytelling to effect change. Demory is passionate about sustainable shopping and is constantly working towards more ethical consumption.