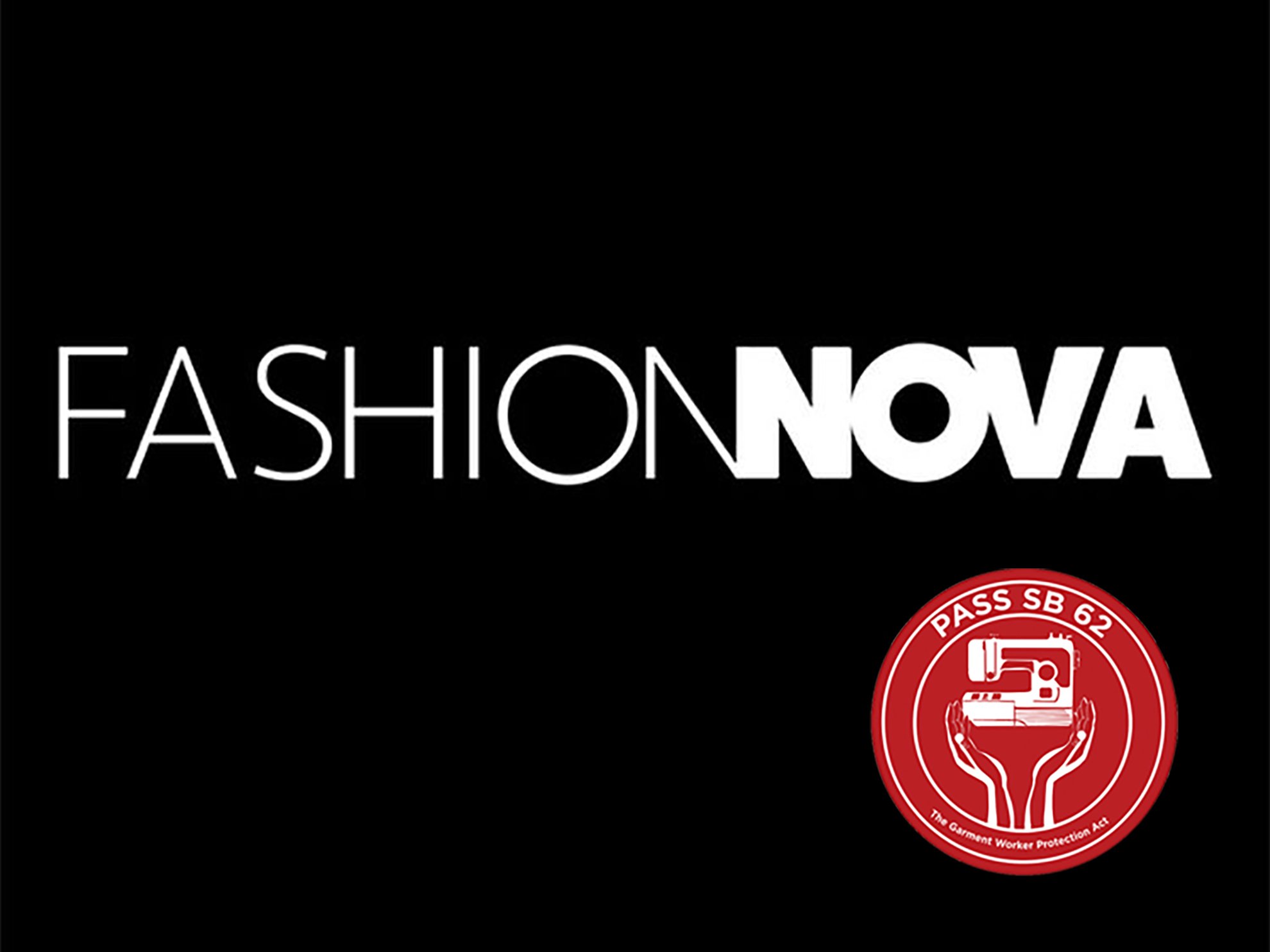 Since then, wage violations have only grown, rooted in the fast fashion brand strategy of decreasing supply chain transparency and absolving themselves of labor liability.

With average hourly wages merely a third of minimum wage requirements, Fashion Nova has recently topped the list of brands committing wage violations in California as a prime example of the unfortunate success of the brand’s evasive and exploitative tactics.

Below is a breakdown of Fashion Nova’s wage practices for the 10 cases assessed by the CA Labor Commissioner.

For the above 10 cases against Fashion Nova, the California Labor Commissioner has already awarded $409,600.93 in wages owed to garment workers, but there are still more cases to be evaluated. Made easier to wrap one’s head around, this means that the average amount stolen from a garment workers who files a wage theft claim against Fashion Nova is approximately $40,960.

CA Labor department investigations from 2016 to 2019 uncovered that Fashion Nova relied on indirect sourcing chains to distance themselves from labor abuse within its supply pipeline. The brand’s sourcing model was revealed to be operating by placing a high volume of bulk orders with contractor companies that ship design and fabric material to subcontracted cut-and-sew garment workers, who would be in charge of final product assembly. Consequently, that meant Fashion Nova would pay the contractor companies for their orders, rather than the actual garment workers sewing their inventory.

In September of 2019, CA Labor Department officials notified the brand that over the four years that they had been investigating LA garment manufacturing industry operations, they had found the brand’s indirect production was tied to 50 open cases of wage theft, totaling to approximately $3.8 million owed to garment workers in back wages. Fashion Nova’s general counsel responded in a statement saying that the brand: “is not responsible for how these vendors handle their payrolls.”

But it’s a pricing model that has specifically been created by the brand to keep production costs unethically low. Of the employees who agreed to be interviewed by The New York Times, five recounted Fashion Nova’s insistence on imposing impossible turnaround times, oftentimes inconsistent with legally allotted work hours, while simultaneously only committing to pay the lowest possible price per garment.

“On average, contractors receive only 73 percent of the price they would need in order to support paying these workers the absolute minimum allowed by law.”

And this “low price”? US Labor Department Research indicates that the retailer manipulated garment pricing model doesn’t even begin to cover minimum wage and overtime compensation — two of the most basic labor rights. In a 2016 study of the LA garment manufacturing industry, the Department reported that “on average, contractors receive only 73 percent of the price they would need in order to support paying these workers the absolute minimum allowed by law.” But with the financial strength of the volume of high orders, retailers have managed to demand more than the labour capacity of their manufacturers, essentially coercing their suppliers to subcontract short timeframe orders and incentivizing labor abuse in the prioritization of overproduction. The result of this model is a piece pay rate system, tying compensation directly to production targets, and most notably, resulting in wages that are significantly below minimum wage.

Fast fashion retailers like Fashion Nova operate on a system of overproduction and under compensation. It’s how they have managed to reach profitability levels of $500 million in 2020 alone.

With the effects of the pandemic, the existing patterns of labor exploitation and wage theft have only gotten worse. Given the recent declines in consumer demand, Fashion Nova has been cancelling orders at the last minute, leaving workers, both contracted and subcontracted, unpaid for completed work. This behavior has only been further exacerbating pressure points within the retailer-dictated manufacturing model during what is already a precarious time.

None of these brands have confirmed any meaningful commitment to supply chain transparency.

Ross claimed in the face of GWC protests against wage theft that the brand “does not own or operate manufacturing operations in Los Angeles or elsewhere. The claims made by the Garment Worker Center are between the manufacturers’ subcontractors and their workers, not Ross employees.” Perhaps Ross’s most ridiculous statement was the following: “we have no control over what our vendors and manufacturers pay their workers.” Missing from this statement is Ross’s role in perpetuating a system in which it demands garment worker exploitation for its contractors to deliver products on time. Rather, Ross’s rhetoric frames wage theft as simply negotiating the “best price.” The brand even claims on its website: “We’re savvy—our buyers search the globe for the best brands and latest styles. We work directly with manufacturers to negotiate the best deals!” But much like the Fashion Nova sourcing chain, Ross’s garment workers can testify that “negotiating for the best deals” translates to shortchanging garment workers for their skilled labor. Garment workers subcontracting for Ross earned approximately $300/week for 50-60 hour weeks to meet inventory demand. In 2016, The California Labor Commissioner evaluated wage claims against the brand, resulting in calling on Ross to pay back $849,104.13 in owed wages.

The brand has been slow to pay. Loopholes in California labor law have allowed fast fashion brands like Ross and Fashion Nova to skirt liability, essentially allowing them to profit off of this system for more than two decades.

At the core of this system is the exploitation of a legal loophole that brands like Fashion Nova have found within the AB-633 legislation, i.e, the distinction drawn between “garment manufacturers” and “retailers.” Brands have argued that their status as retailers exempts them from any legal provisions specified by AB-633. It’s a semantic argument at best — but it’s one that has unfortunately been legally passable, resulting in  life-threatening consequences for garment workers.

It’s a devastatingly real risk, evidenced by fast fashion brand patterns of wage payments. Of the $409,600.93 Fashion Nova owes in back wages to its garment workers in 2020 alone, approximately 94% of wages are still unpaid.

SB62, the Garment Worker Protection Act, would institute brand liability for ensuring garment workers earn a minimum wage. Perhaps most significant, the bill would put an end to the piece pay rate system that allows brands to get away with wage theft, and would outline a system of joint liability that would hold brands and suppliers accountable for the Garment Worker Restitution Fund, rather than pushing the brunt of that burden onto the taxpayers. In short, under SB62, brands will be directly responsible for any issues of supply chain ethicality and will be held liable under California labor law.

The bill, which will be making its way to Governor Gavin Newsom’s desk, is in dire need of legislative support in order to pass. Urge your Assembly member to vote YES on the bill by calling as soon as possible. 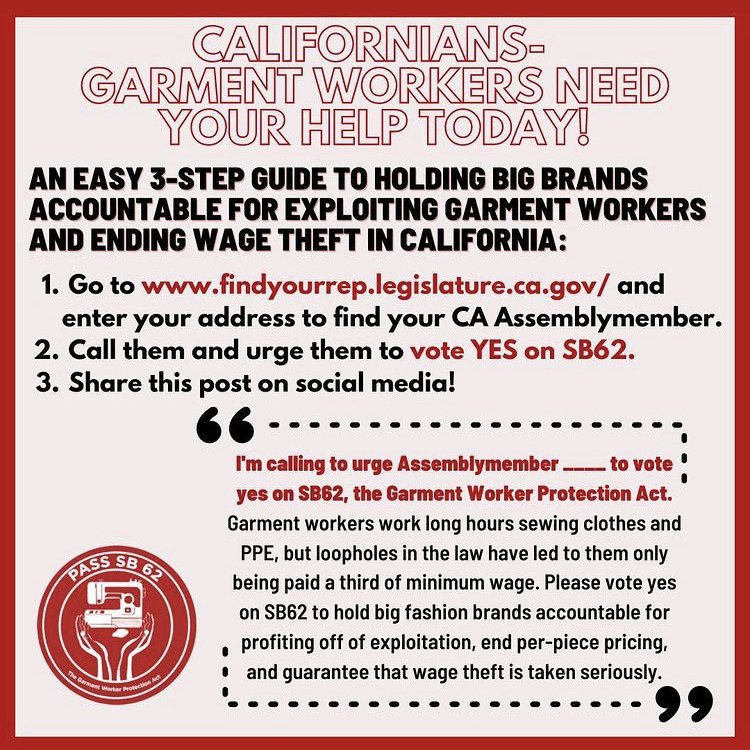