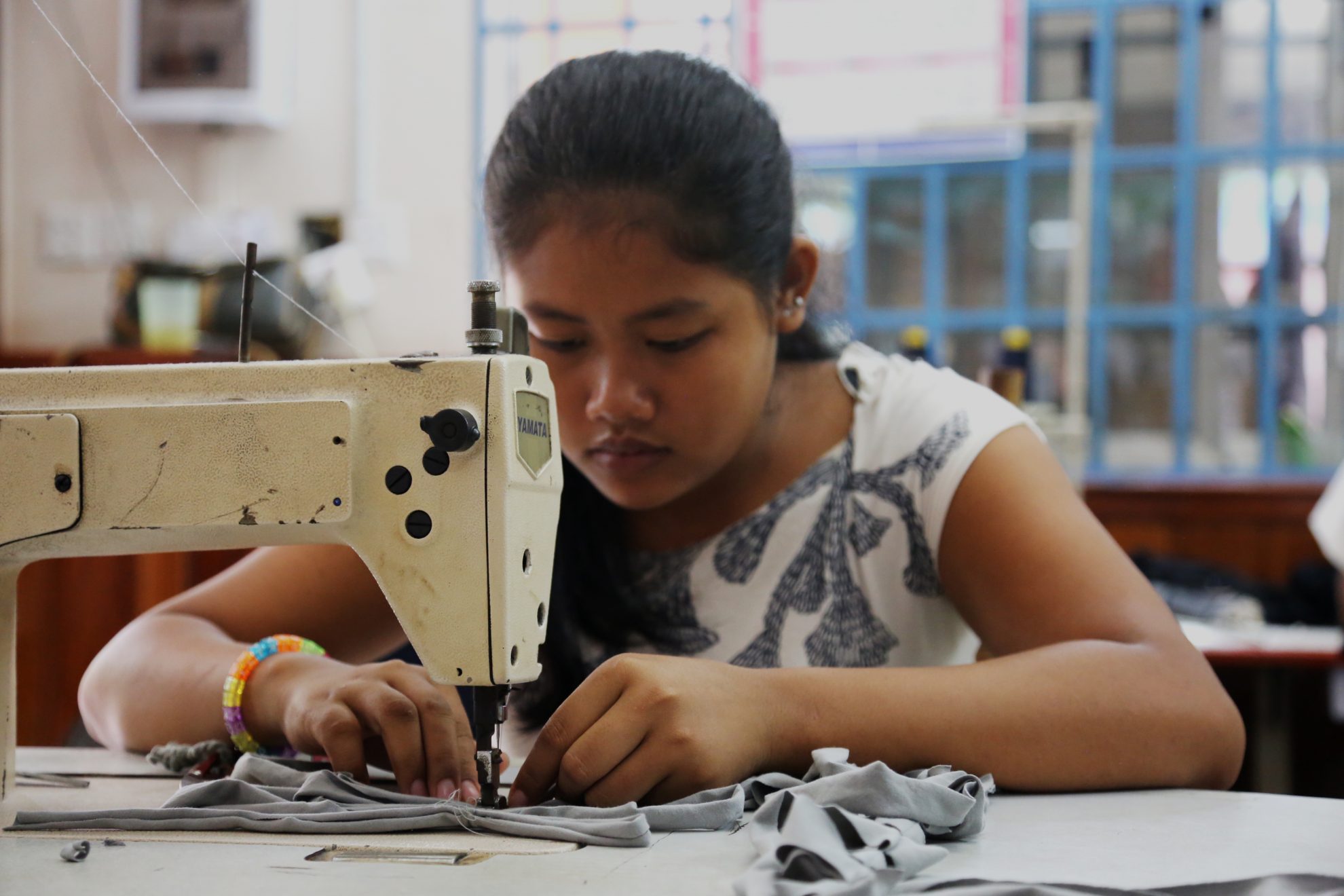 September is all about the glamour of the fashion industry — the glitzy runway shows live-streamed from every Instagram account, influencers pinning the best street style listicles, and magazines at their fattest, full of beautiful images and bold advertisements. While the colors and lights can get distracting, I always remember what makes this whole industry tick; whether it’s overworked, unpaid fashion week interns or women across the ocean stitching tags into our clothes all day long for pocket change. Fast fashion can both physically and financially hurt garment makers.

I can’t help but think about how the bright sparkling runways and dark dusty factories could not be more different and yet ironically, can one survive without the other?

At Remake our fast growing community of millennial and Gen Z shoppers have pledged to join our #WearYourValues campaign to buy less and better. Because while we love the glitz and glamour of NYFW, we care about the makers of our clothes and our planet. We recognize that fashion’s hyper-growth and overconsumption takes too much water, impacts our climate, and is built on the loss and lessening of human lives.

Yet there is tension between buying less as stewards of our planet and protecting the over 75+ million people, mostly women in their early twenties, who make our clothes.

At nearly every talk I give about our sustainable fashion Movement, an audience member asks — “Won’t boycotting fast fashion and buying less cause the women who make our clothes to lose their jobs? Aren’t sweatshop jobs better than no jobs at all?”

The answer is — it’s complicated.

Here are three reasons why I still believe a key part of the solution for us as everyday shoppers is to buy less, keep clothes in circulation longer, and support brands that match our values:

Today we produce more than 100 billion units of clothes to dress just 7 billion people on the planet. Fast fashion is notorious for poor production planning and burning excess inventory.

Making cheap clothes is very costly, in terms of our natural resources.

Take water for example. It takes 710 gallons of water to make just one t-shirt; that’s how much a person drinks in three years. While communities across the world struggle to access clean drinking water, fashion uses enough water to quench the thirst of 110 million people for a whole year according to the Global Fashion Agenda.

Despite this resource intensity, 6 out of every 10 garments are burned or buried within their first year of production. According to the EPA, in the US alone we send nearly 13 million tons of textile waste to landfills annually — that’s an entire football field filled 14 feet deep with clothing.

Moreover, it is the women who make our clothes who are on the frontlines of contending with these environmental impacts, with the air she breathes and the water she drinks.

So for the sake of our planet, we cannot continue to support throw away fashion.

2. Sweatshops keep women trapped in a cycle of poverty and hurt garment makers

Fast fashion heads to countries where labor laws are weak and enforcement even weaker. The industry doesn’t stay to support makers and invest in their community. The minute a country’s wages go up, the industry flees — as we’ve seen from the move out of China to Myanmar and Ethiopia.

Today garment factory workers in Bangladesh earn about $3 a day, according to the Guardian, and in most counties, over 85 percent of garment workers aren’t even paid the minimum wage. Ethiopian garment workers, reportedly the worst paid in the industry, make just 87 cents a day. With stats like these, it’s hard to say fast fashion doesn’t hurt garment makers or take advantage of their labor.

In our own Made In docuseries work from Cambodia to Mexico we’ve met garment makers who have lost their jobs and are owed backpay when factories suddenly shut down with no notice.

Garment jobs are neither good nor safe. So the argument that at least fast fashion creates jobs is not good enough. Deaths and injuries are common place in our industry — from the infamous Rana Plaza factory collapse to the lesser known but constant truck accidents which injure, kill, and hurt garment makers on their way to work.

Fast fashion exploits and engulfs generations of women into a cycle of poverty. On every Remake journey to production hubs, the women we meet tell us that they are sacrificing their own wellbeing to keep their children in school and secure a better life for their families. Yet, she is making barely enough to pay rent and put food on the table. I remember a story of one woman that haunts me to this day. Her garment job paid her so little, that when she had a tooth ache, she had to take out a predatory loan and take up sex work on the side to pay the loan back.

Should our dollars be supporting these types of jobs?

I believe we are better off committing our dollars to match our values with our Seal of Approval brands that do more to leave the makers of our clothes better off. Many brands can do better by looking at the approach Veja takes — all its production happens in one area of Brazil and has from its beginning, ensuring factories are following its standards. In addition to publicly posting the average monthly salary of a Veja factory employee, the brand gives workers four weeks of paid vacation and bonuses at the end of the year, and 80 percent of the workers are unionized.

Another Remake-approved brand, the Akola Project, goes above and beyond others in the field. While its luxury jewelry is sold at Neiman Marcus, the brand is completely non-profit, meaning 100 percent of its profits are reinvested to support work opportunities, training and social programs, and the construction of training centers and water wells in impoverished communities throughout the world. It pays women in Uganda a living wage to create its products and offers formerly-incarcerated women in Dallas a second chance through jobs in its distribution center.

3. The robots are here

As technology advances, automation within the garment industry is inevitable. Many of the women who make our clothes will lose their jobs regardless of whether we buy clothes from stores like Forever 21 and Boohoo or not.

Per the ILO, near 90 percent of garment and footwear makers in Cambodia and Vietnam are at risk of being replaced by automated assembly lines or “sewbots.”

Repetitive, labor-intensive piecemeal work that women do inside garment factories will soon be replaced by robots. While the loss of these jobs is scary, there is a glimmer of hope. Machinery can take over the more dangerous jobs and some of the women who make our clothes will have the opportunity to do more skilled work and hopefully earn more money.

“In a best case scenario, robots take on board the most repetitive, mundane, and non-cognitive tasks of apparel manufacturing,” Jae-Hee Chang, the author of the ILO report, says in the Guardian. “Robots would also assume more of the dangerous and dirty tasks, like mixing of chemicals, which can be hazardous to human workers. Ultimately, human workers would be able to perform more satisfying and rewarding, as well as higher-paid, jobs in the sector like programming robots for better production and design.”

Now it’s a race against time to support garment makers by using our activist voices to hold brands accountable to keep her safe and pay her more until the robots take her job away. And until then isn’t it better to spend our hard-earned dollars on brands that leave her better off? Shouldn’t we be sure our purchases don’t hurt garment makers more than they help her?

In short, I hate the question — Aren’t sweatshop jobs better than no jobs? Because we owe the makers of our clothes and our planet more than that.

Update: The story has been corrected on 6/1/22 to reflect updated information regarding changes to garment workers’ wage gap.