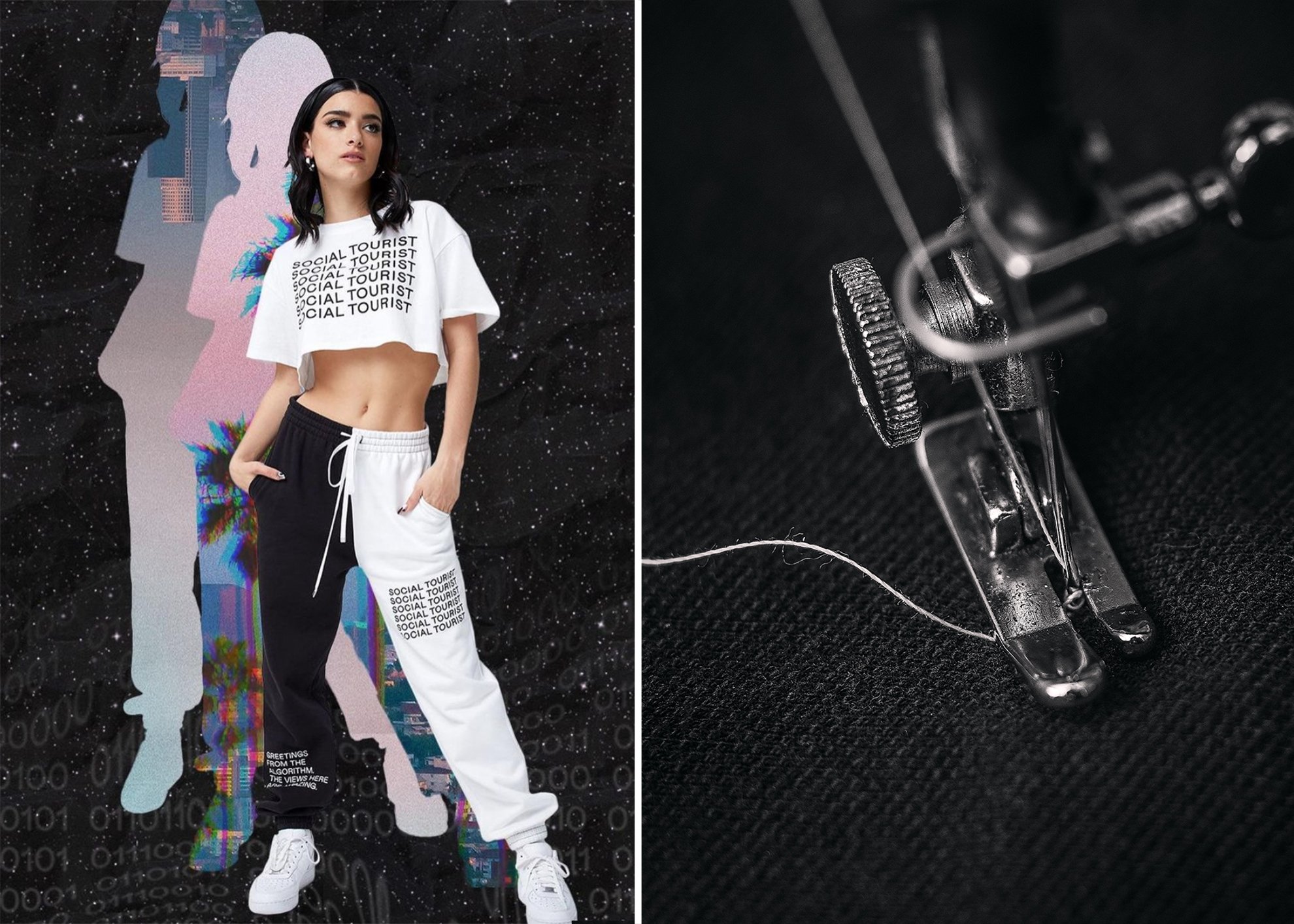 May 27th, 2021: This story has been updated with a brand response from Abercrombie & Fitch.

Another day, another celebrity clothing line. This week, it’s influencers – Charli and Dixie D’Amelio – the all-singing, all-dancing TikTok stars with a combined following of 168 million people on the app alone at the time of writing. Their brand, Social Tourist, will operate under the Abercrombie & Fitch portfolio and be sold through Hollister, plus a dedicated brand site, launching today.

According to a recent press release, the sisters have “been involved in every aspect of Social Tourist, including product selection, design, branding, positioning and marketing,” and their dad (Marc D’Amelio – yes, also a TikTok personality) will act as a consultant, having worked in the apparel industry for almost 30 years.

Considering the D’Amelio’s purported level of involvement in the line, as well as family ties to the world of fashion, it begs the question: did they do a quick Google of Abercrombie & Fitch’s sustainability credentials before forging this undoubtedly lucrative deal? It appears not. Because what they would have found is a clothing empire that received a dismal 13/100 in Remake’s Seal of Approval criteria, a “Terrible” rating from Fairify, a “Not Good Enough” from brand directory Good on You, and a score of 25% in Fashion Revolution’s 2020 Transparency Index. So far, things aren’t looking great.

When it comes to garment worker well-being, the brand shares no proof that their workers are paid a living wage, or that they’re implementing worker well-being or community development initiatives.

After publication, Abercrombie and Fitch (A&F Co.) reached out to Remake to emphasize that A&F Co. vendors are audited throughout the year to ensure compliance with their Vendor Code of Conduct, which shares proof of their living wage terms. Additionally, A&F Co. stated that the brand’s water, carbon, and energy initiatives can be found on their website. We vetted their claims against our Seal of Approval transparency scoresheet and found that their score did not improve.

Should we be surprised? Probably not. Charli and Dixie are following in a well-trodden path of celebrity influencers – including Kendall and Kylie Jenner, Emily Ratajkowski, and Aimee Song – who create fashion brands with little-to-no concern for the planet or people who make their clothing. But even by today’s greenwashing standards, there’s not even a vague mention of “organic cotton” or “recycled polyester” in any press around Social Tourist. It’s somewhat surprising that two of the most zeitgeisty social media stars in the world aren’t jumping on the sustainability bandwagon.

A quick look at A&F’s sustainability page paints the picture of a company taking steps to become more responsible, with what appears to be quite a lot of available information. However, scratch the surface and you’ll find a lot of words — not a lot of action. This is a practice called ‘information dumping’, where brands bamboozle readers with confusing language that appears legitimate, but doesn’t really mean anything. Their Active Factory List, for example, shares the names of only Tier One suppliers, when there are generally three or four tiers within a fashion supply chain that brands should be able to trace.

Diving deeper, it’s not just their manufacturing network that A&F is keeping private. When it comes to garment worker well-being, the brand shares no proof that their workers are paid a living wage, or that they’re implementing worker well-being or community development initiatives. The brand’s environmental credentials are even worse – showing no genuine commitments or developments to reduce their impact where carbon emissions, water, chemicals, waste, or packaging is concerned.

The brand’s environmental credentials are even worse – showing no genuine commitments or developments to reduce their impact where carbon emissions, water, chemicals, waste, or packaging is concerned.

Of course, it’s worth asking, should a 17-year-old (Charli) be expected to understand the complexity of supply chain transparency? Should a 19-year-old (Dixie) be able to read between the lines of A&F’s information-overloaded, but ultimately hollow, sustainability policies? Perhaps their dad should have filled them in on what happens along opaque supply chains, where human rights abuses and environmental degradation are rife?

It isn’t fair to place all the blame on two young women who have been offered undoubtedly huge sums of money to create exactly the kind of clothing they, and their audience, want to wear. But given that the size of their following is equivalent to half the U.S. population, there is an undeniable responsibility to ensure that the clothing they sell doesn’t add to the piles of clothing in landfills and the suffering of millions of garment workers around the world. So far, there’s no evidence to show that A&F or Social Tourist have given much thought to the brand’s potential impact.

As fashion’s contribution to environmental and humanitarian crises around the world becomes increasingly devastating, we can’t keep brushing collections like these off as just another influencer money-making scheme. The D’Amelio’s have a huge influence over their Gen Z audience, who are quickly becoming the biggest consumer group in the world. Dropping limited-supply collections every month, as Social Tourist intends to do, only encourages a pattern of rapid clothing consumption that we desperately need to move away from in order to protect not only garment workers, but the environment.

Just imagine how impactful Social Tourist would have been if the D’Amelio’s partnered with a brand that had legitimate sustainability policies in place? Or even better, how impactful would it have been if they’d used their enormous platforms to spotlight and support the urgent need for direct relief for garment makers during this global pandemic instead of adding yet another fast fashion collection into the world at all?

CTA: Ask the D’Amelio sisters who is sewing their clothes by tagging their handles on Instagram (@social tourist, @charlidamelio, @dixiedamelio) with the hashtag #socialdisaster