The global business community has deemed Bangladesh an economic success story, in large part because of its ready-made garment export industry—the third largest in the world. McKinsey & Company cites “the strides Bangladesh has made in improving conditions for the country’s approximately four million garment workers” as one of the main reasons for its “remarkable economic and social progress.” Those strides have been made in large part by the Accord on Fire and Building Safety in Bangladesh — and if this continued success hopes to be seen, an Accord extension is necessary at the end of this month.

Since 2013, the Accord has overseen over 140,000 safety renovations in more than 1,500 garment factories and radically reduced the risk of injury and death for over two million Bangladeshi garment workers, but after eight years, this life-saving safety program is set to expire on May 31, 2021.

Nearly 200 apparel brands signed the last iteration of the Accord in 2018. Thus far, in 2021 with the Accord’s expiration set for May 31st, only one brand (ASOS) is publicly supporting the Accord’s extension. Unions and labor rights advocates strongly recommend that these brands, and any other apparel brands and retailers with suppliers in Bangladesh, sign a new binding agreement that will continue the Bangladesh Accord and bring the model to other countries. Brands must decide whether to extend and expand the Accord’s successful work or allow it to end — a decision which would be catastrophic in terms of keeping workers safe.

WHAT WILL HAPPEN TO UNRESOLVED SAFETY PROBLEMS IN FACTORIES IF THE ACCORD IS ALLOWED TO EXPIRE?

H&M, a Bangladesh Accord signatory, is one of the brands ready to drop the Accord, but in the last eight years, Accord engineers found a vast number of the safety hazards in Bangladeshi factories producing for the Swedish company. According to a report written by the four witness signatories to the Accord, Clean Clothes Campaign, International Labor Rights Forum – Global Labor Justice, Maquila Solidarity Network, and Worker Rights Consortium, 91% of those hazards have been remediated under the Accord’s watch; but the work is not yet completed: 159 of those factories lack fire alarm and detection systems; 118 factories lack safety exits; 163 have no fire protection system; and 44 have safety hazards that require immediate attention.

H&M is the largest fashion brand signed onto the Accord, but the CCC report states that eleven additional major brand Accord signatories have contracts with factories that have yet to remediate 9% to 13% of the safety hazards found by Accord inspectors.

Almost every safety hazard, including open-flame gas burners used to cook inside factories, piles of products that block factory exits, heavy products stored on floors that cannot take the weight, flammable products inappropriately stored and utilized, dust-covered electrical wiring, and too-hot electrical systems, are recorded for the public by Accord inspectors. Remediation of these hazards, overseen by the Accord, has substantially reduced the amount of factory fires, explosions, and building collapses in Bangladesh’s factories and saved millions of garment workers from injuries and death.

H&M is the largest fashion brand signed onto the Accord, but the CCC report states that eleven additional major brand Accord signatories have contracts with factories that have yet to remediate 9% to 13% of the safety hazards found by Accord inspectors. Some of these brands boast on their websites that their role as Accord signatories is proof that they are responsible for the safe working conditions in their supply chains. Some brands do not. All these factory remediations—and more—could be set aside by the end of May if the Accord expires.

WHAT WILL HAPPEN TO THE READY-MADE-GARMENT SUSTAINABILITY COUNCIL IF THE ACCORD IS ALLOWED TO EXPIRE?

In 2020, the local Bangladeshi organization, the Ready-Made-Garment Sustainability Council (RSC), took over the local implementation of the Accord. On its website, H&M insists that the RSC “adopted all Accord protocols and articles and will maintain operations once the Transition Accord ends in May 2021. In collaboration with all stakeholders, we aim to secure the continued success of the RSC.”

Not everyone agrees that the RSC is—by itself—a fitting replacement for the Accord. In the opinion of the witness signatories to the Bangladesh Accord, the RSC was created in response to push-back from Bangladesh factory owners. The RSC “was never intended to replace the Accord agreement itself. Principally, the Accord is an enforceable agreement between global brands and labor unions.” The RSC will be accountable to the independent Accord secretariat in the Netherlands until May 31st.

In the opinion of the witness signatories to the Bangladesh Accord, the RSC was created in response to push-back from Bangladesh factory owners. The RSC was never intended to replace the Accord agreement itself.

Unlike the board of the original implementation arm of the Accord, which was made up of the brands and unions, one third of the RSC board is made up of manufacturers, “which raises concern about the power dynamic,” says Laura Gutierrez of WRC, one of the Accord’s witness signatories. “It opens up space for potential interference by the manufacturers.”

Christie Miedema of the CCC agrees. At this point, “the RSC is still covered by the binding regulations of the Accord.” Potential interference has been monitored by the Accord’s secretariat. Miedema is worried that “as soon as the binding agreement runs out, we don’t know to what extent brands or factories will be held accountable for promises made under the Accord.” 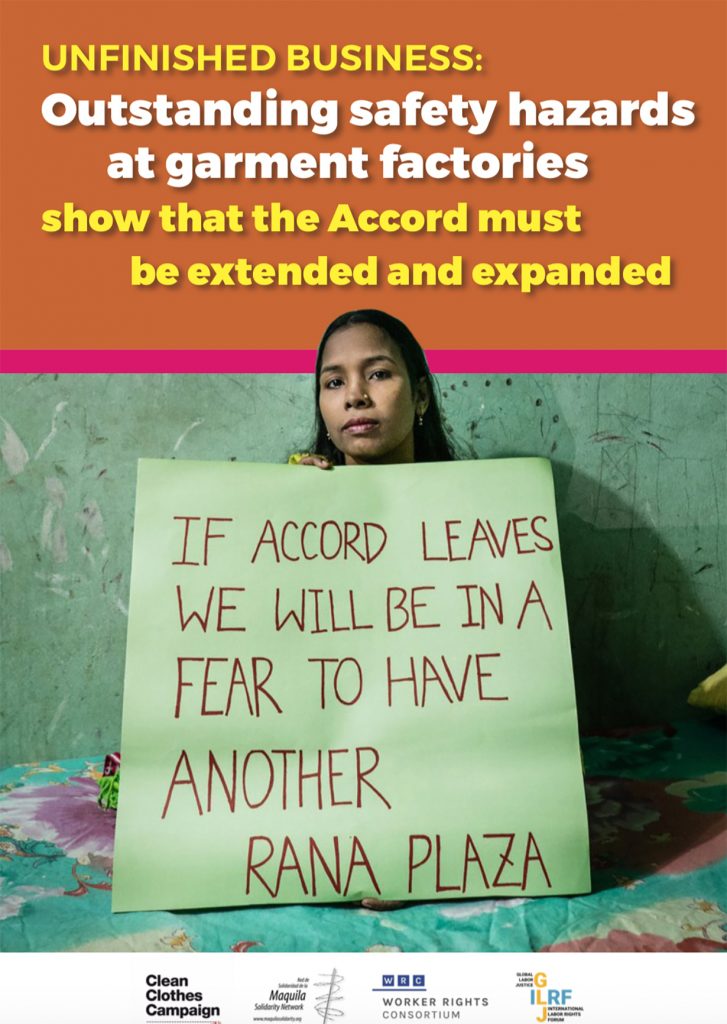 Kalpona Akter, president of the Bangladesh Garment and Industrial Workers Federation (BGIWF) and founder of the Bangladesh Centre for Worker Solidarity (BCWS), a former garment worker herself, was more blunt about the potential for conflict in a press briefing put together by the WRC in April, 2021:

“Last year the Accord had to hand over its work in Bangladesh to the successor, RSC, where we have eighteen seats on the board, six for unions, six for manufacturers and six for business. [instead of the original six for workers unions and six for brands]. It’s not power-balanced. If the Accord is not signed on the international level, the RSC will not be credible. Manufacturers are interrupting the safety protocols, out of nowhere they jump in and tell how to handle that or not to do that. If there is no binding accountability for them, the RSC will not be credible at all and we, the unions, will pull out from the RSC. The union will not be with anything that is not credible where the workers voice is not being heard and doesn’t have any legal obligation.”

As soon as the binding agreement runs out, we don’t know to what extent brands or factories will be held accountable for promises made under the Accord.

One of the key components of the Accord is “a very robust complaints mechanism where workers in the factories in Bangladesh feel safe to bring forward concerns they have about a lack of safety in their factories,” said Alke Boessiger, head of Commerce department, UNI Global Union, a signatory to the Bangladesh Accord, in the same WRC press briefing. The Accord complaints mechanism “is something we need to absolutely maintain in our new agreement going forward.”

WHAT WILL HAPPEN IN OTHER GARMENT-PRODUCING COUNTRIES  IF THE ACCORD IS ALLOWED TO EXPIRE?

Boessiger also brought up the need to bring the key element of the Accord, “its joint governance, unions, and brands working together,” to other countries.

Expansion of a binding agreement on safety “isn’t an easy process, or something that can happen from above,” says Christie Miedema, although many countries could use something like the Accord. In March 2021 alone, more than forty garment workers in Egypt and Morocco lost their lives due to unsafe factories. Expansion can only be done “if it’s done thoroughly.”

“The idea is that brands, instead of signing a new Bangladesh Accord, would sign an international legally binding Accord which would initially only cover Bangladesh. Bangladesh would be under this international binding agreement, then other countries could be added over time. Our first proposal would be Pakistan for the reason that unions and labor rights organizations in Pakistan have been calling for a safety program like the Accord for years.”

The idea is that brands, instead of signing a new Bangladesh Accord, would sign an international legally binding Accord which would initially only cover Bangladesh. Bangladesh would be under this international binding agreement, then other countries could be added over time.

“We saw a tragedy in 2012 where one brand was involved. Now, every month there is some kind of accident in textile and garment factories. The situation is becoming worse as compared to 2012. Every day there is picketing, every day there are demonstrations. Thousands and thousands of workers are being detained from their jobs who were working in factories producing for the brands who signed global framework agreements. But we don’t have any kind of mechanism to put pressure on the brands. When there is no pressure, brands will always try to skip from their responsibility.”

When there is no pressure, brands will always try to skip from their responsibility.

“There were these voluntary initiatives [in Pakistan] that didn’t manage to change the industry,” says Christie Miedema. At present, “there is a very concrete proposal and support in society among the industry, among brands, to do something in Pakistan. So that will be a great start. We’ve seen too often in the past that brands, for example, propose ‘well now this is nice in every single country.’ That just won’t work. You need to make sure that all parties in that country would abide by the international legally binding agreements made in that international agreement.”

WHAT WILL BE LOST

The Bangladesh Accord on Fire and Building Safety was established after over 1,100 garment workers were killed when Rana Plaza, a building that housed five apparel factories, collapsed in 2013. More than 200 brands, including Primark, Marks & Spencer and H&M, signed onto the original Accord.

Rana Plaza was the largest apparel industry accident in a country riddled with unsafe factories. Before the Accord, a hundred voluntary programs failed because brands’ commitments to factory safety were not legally binding.

The Bangladesh Accord is now on the brink of expiring because brands refuse to sign on to a new binding agreement “that pulls along the same principles and commitment as we have now,” says Alke Boessinger. If that happens, eight years of “the most successful safety program in the contemporary history of apparel supply chains” will be lost.

Given H&M’s large presence in Bangladesh and lofty promises to be sustainable, please ask H&M to immediately sign & support the Accord’s renewal in one or both of the following ways:

1) Email this letter to Leyla Ertur, Head of Sustainability at H&M Group, ertur@hm.com