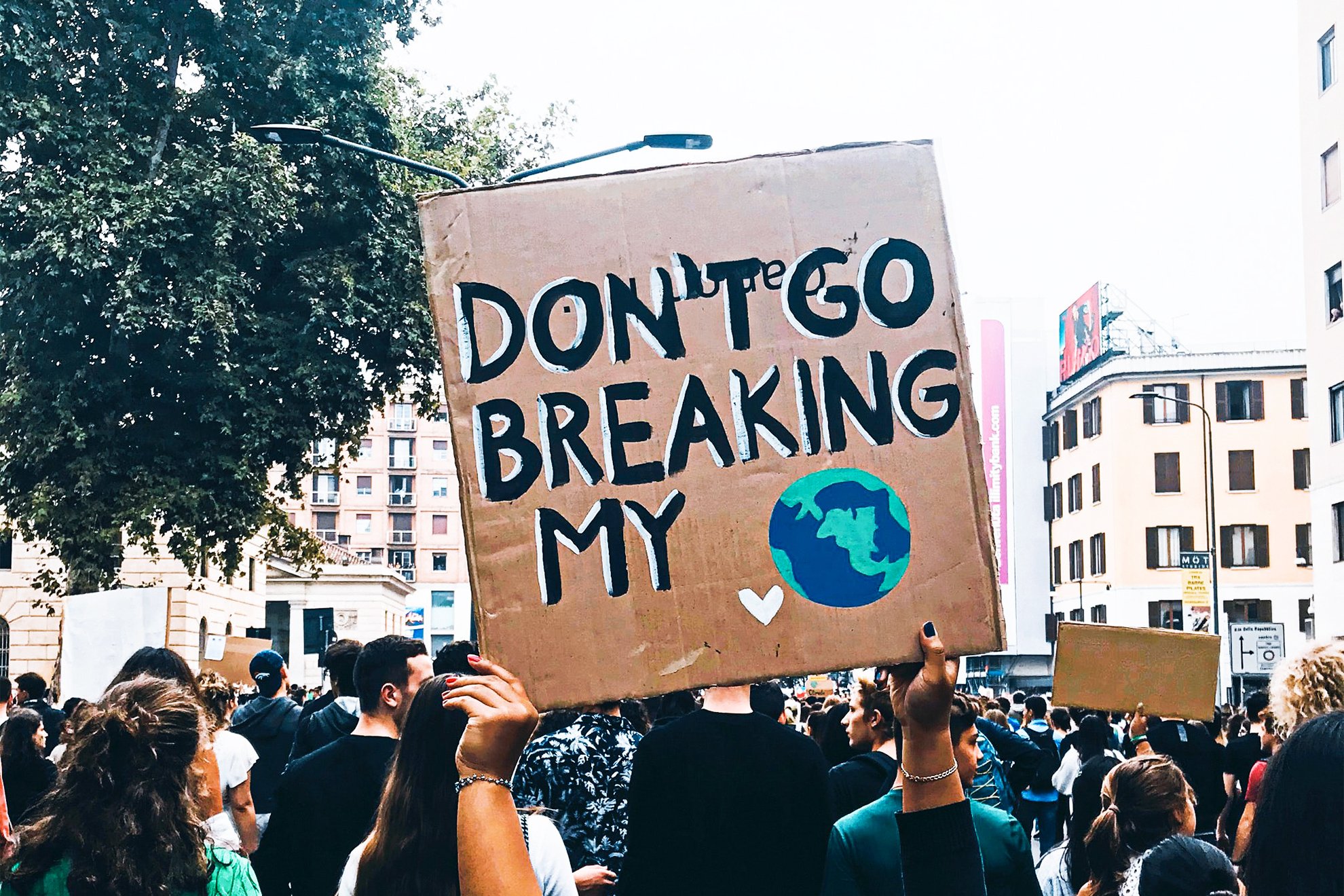 From destroying the planet to paying starvation wages, there is a huge amount of injustice within the fashion industry, and the unfortunate truth of the matter is that most consumers either turn a blind eye to the problems that exist or genuinely aren’t aware of them. At Remake, October was a month where we focused on how to make change as a collective community, as well as with our individual voices — because we do have the power to influence brand behavior, help fix fashion, and advocate for a legal system that holds the industry accountable.

As we forge ahead into the month of November, we’ve rounded up nine precise ways that your actions can make a difference in making fashion a force for good. Please bookmark this article, share it with your friends, and most importantly, never give up the fight.

The reality is there are a lot of sweatshops not only around the globe, but in cities throughout the United States. Los Angeles, in particular, is home to a hub of labor violations within the fashion industry, serving as the country’s largest cut and sew apparel base in the U.S. Garment makers in these Southern Californian factories are often forced to work without fair pay and amidst dozens of health and safety breaches just to get by. In this unjust system, makers are frequently paid a piece rate, which equates to a few cents per garment sewn — ultimately making it impossible for makers to earn a fair living wage. Fortunately, you can help fight this severe injustice. The Garment Worker Protection Act, also known as SB-1399, has the power to put an end to piece rates if passed by the California Assembly. While the bill was supposed to undergo a vote last month, it ended up dying on the Assembly floor after time constraints kept it from being voted on. That said, the bill’s authors are preparing to bring it back to the Assembly for a vote in 2021 and need your support.

Call to Action: Learn more about SB1399 and continue to post about the #GarmentWorkerProtectionAct on social media. Tag Governor Newsom @cagovernor and your elected officials #CALeg so they know we are all still in this fight!

Remake will be continuing to cover the Garment Worker Protection Act with an upcoming monthly column. Subscribe to our newsletter to make sure you stay up to date with how you can help get this essential bill passed in 2021.

Activism has evolved in several ways. One of those ways is through social media and the use of hashtags. The problem is hashtags can be a little empty. You want to make sure you look into each hashtag and find out how activism is being turned into action. The #PayUp hashtag is doing just that by demanding fashion companies sign contracts to pay workers fairly, along with six other industry-changing demands. This PayUp Fashion movement is a great way to get involved and demand accountability from the industry. The main goal of the campaign is to give workers center stage, ensuring that they are treated as they should be and seen in the public eye.

Call to Action: Sign the #PayUpFashion petition. Already signed? Get five of your friends to sign it as well — let’s make sure brands are feeling the pressure!

Fashion is a sticky business, and there’s been no shortage of greenwashing from major fashion brands over the past few years. So how does one find brands that are truly ethical in their approach to people and the planet? Transparent brands will make sure you know where their money is going, who they are giving it to, and how much they are paying their workers. By refusing to purchase from brands that aren’t transparent, you’re hitting them where it hurts. Not to mention, small, sustainable brands need your support to keep their makers employed.

Call to Action: Only shop from brands that have received Remake’s Seal of Approval. Keep your eyes peeled for Remake’s new Sustainable Brand Directory, which will be released in November 2020.

4. Lower Your Consumption of New Apparel

Most trends don’t matter, but there are a few worthy ones, like the #chooseused movement. A lot of used clothes end up in landfills (about 70%!). That’s regrettable, but you can do something about it. Start by repurposing clothes you don’t want or partaking in a clothing swap with friends. If you have the time, sell some of your old clothes to make extra cash. Try to purchase used clothing when you can. Remember, the longer we can keep clothing in use, the more we keep out of landfills. Really want to take things to the next level? Take the #NoNewClothes pledge and refrain from purchasing new apparel for a full three months. The act of pledging to buy no new clothes will help you reset your relationship with fashion and assess your consumption habits.

Call to Action: Take the #NoNewClothes pledge and limit your consumption. Challenge yourself to not throw out any old clothing — but rather, find a new use, home, or purpose for it.

Busted zippers, holes, and tears are common reason people throw out clothes — but they don’t have to be! Instead, you can take your clothes, shoes, and bags to a local tailor in your area. You’ll end up supporting local industry and giving your duds a longer life. Low on cash? No problem. You can still keep those busted clothes from finding their way to a landfill by mending them yourself!

Call to Action: Research local tailors and bring in a fave piece of clothing that needs mending. You can also try out one of these 5 easy stitch fixes.

Part of promoting change within the fashion industry means holding brands accountable — even if they are your longtime favorites. Many well known brands that consumers know and love are violating human rights on a daily basis. Nike, Uniqlo, and Zara are just a few of many brands that were recently called out for sourcing their cotton from forced labor. Hard to fathom, right? Still, it’s vital that we vote with our dollars and let these brands know we won’t support them until they start acting ethically.

Call to Action: Tag @Nike, @Uniqlo, and @Zara on social media and demand they stop sourcing cotton from forced labor.

Although the issue of racial injustice is not new, the pandemic and other circumstances in the US created an environment where the Black Lives Matter movement finally got the attention it deserves. As a reflection of this, various brands all over the world put out statements in support of the Black Lives Matter movement, oftentimes providing resources and paths through which their consumers could contribute to the fight against racial injustice. While it was great to see so many brands say the right things, it is important that we hold them to doing the right things. By checking in on brands to be sure they are making actual change, we can prevent them from turning solely to performative statements.

Call to Action: Research your favorite brands and asses the amount of diverse representation on their boards and in management roles. Find that a brand is lacking diversity? Call them out on it via social media or writing directly to them.

8. Stop Ross from exploiting their makers

Oftentimes, when we think about exploitation of workers, people’s minds think it is a problem that only happens outside the US in developing countries. However, this is certainly not the case. Well known retailers such as Ross have been found guilty of exploiting their workers in the U.S., and were even ordered to pay hundreds of thousands of dollars in back pay to their employees. So what did conditions look like for these garment makers? Compensation of around $5.00 an hour for between 50-60 hours a week of work (California minimum wage at the time was $10.00 an hour), no overtime pay, workplaces infested with vermin, lack of access to clean drinking water, unsanitary restrooms, and lack of proper ventilation and air conditioning.

Call to Action: Take to social media to call out @rossdressforless for their exploitation and tell them because #RossExploits you will not be spending your dollars with them.

9. Donate to Organizations You Believe In

Last but not least, a great way to promote change within the fashion industry is to donate to organizations that are important to YOU. There are various organizations that are dedicated to promoting change, such as the Garment Worker Center, AWAJ, and Stand Up Lanka. All of these organizations are reputable and you can rest assured that your money will help be going to helping garment workers around the globe. Don’t have the means to donate? No problem! Find ways to volunteer or fundraise on behalf of your favorite organization. (Want to become a part of the Remake family? Submit an Ambassador application!).

Call to Action: Take a look at your budget and determine how much you’re willing to donate on a monthly basis to your organization of choice — including Remake! Set up a monthly recurring donation to help fuel the movement.

Paisley Hansen is an activist trying to help and learn in whatever way she can every day. She is the mom of three children, so when she's not out protesting or blogging, she can be found spending time with her amazing kids.