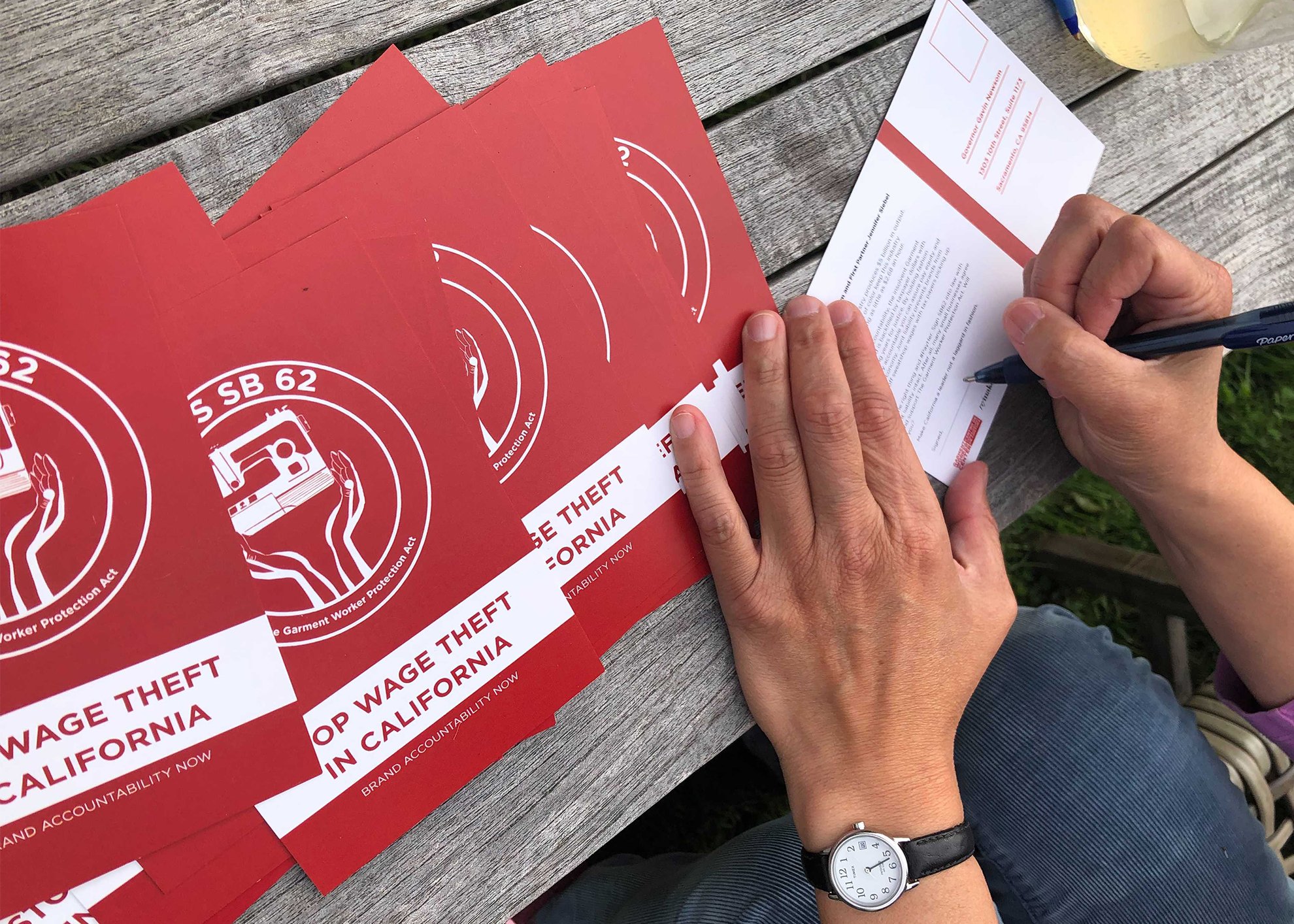 Simply put, the Garment Worker Protection Act (SB62) would put an end to wage theft in California’s garment manufacturing industry. Currently, because of subcontracting, garment workers in Los Angeles are being paid as little as $2.68/hour for their work, despite California’s statewide minimum wage having increased to $14/hour in 2021.

Under SB62, brands would be held liable for sub-chains of abusive labor and ultimately held responsible for ensuring garment workers be paid minimum wage. (At present moment, brands are able to refuse liability for illegal wages being paid to garment workers despite paying suppliers so low a price for apparel orders that it is mathematically impossible for garment workers to earn a minimum wage).

The bill, which emphasizes worker-centric reform, has seen backlash from members of California’s business lobby, who frame business growth and economic recovery as mutually exclusive to labor rights. Here’s why what they’re saying is wrong.

From being a “job killer” to claiming there are only a handful of bad actors, the myths surrounding SB62 are getting it all wrong.

MYTH #1: SB62 is a job killer that will put employers out of business.

The job of garment manufacturing in its current state is highly exploitative — a true killer in itself. Failure of apparel brands to compensate “essential workers” at baseline minimum wage standards has been justified with the use of the “piece-pay rate” system, where workers’ wages are tied to impossible production targets. While in theory this would allow workers to earn above minimum wage, its practice has resulted in the empirical analysis that it is a system taking advantage of workers’ labor without adequate compensation. Under a piece pay rate, workers are forced to produce continuously, without bathroom or lunch breaks, as well as forced to work overtime to meet production targets. In 2020, garment workers were deemed “essential” in their role in PPE production. However, they are still working in sweatshop conditions.

Protecting garment workers by ensuring they are paid at least minimum wage is not equivalent to “killing” garment manufacturing jobs, nor is it “raising the cost of doing business.” Rather, it infuses legally binding accountability within the exploitative supply chain that has yielded illegitimate profit margins.

In a race to the bottom, human rights have been positioned as “anti-business.” Instituting enforceable legislation for brands to ensure that all their employees in their supply chains (no matter the level of indirect employment) are paid in full, establishes that businesses must act in an ethical manner, a manner that is already legal standard across California.

SB62 does not kill jobs. It regenerates them into livable jobs.

MYTH #2: Brands have little to no control over the payroll of garment factory employers.

The fast fashion industry has deep roots in subcontracted labor models and indirect sourcing chains derived from its need to cater to trend cycles, and consequently, it demands quick turnovers of product. When brands enter into contracted labor with garment manufacturing sites, they exchange money for returning completed product within a short time frame. .

Brands have long been making the argument that they are not in violation of contractual obligations because they do not hold the status of “manufacturers.” Because they “buy” product from manufacturers, brands like to label  themselves as strictly retailers — and as retailers, they claim they do not have any obligation of liability to the supply chain that they purchase from. Ross issued this defense in 2018 following a GWC-led garment worker protest. The company claimed: “Ross does not own or operate manufacturing operations in Los Angeles or elsewhere. The claims made by the Garment Worker Center are between the manufacturers’ subcontractors and their workers, not Ross employees; we have no control over what our vendors and manufacturers pay their workers.”

However, by initiating a sourcing model based on imbalanced contracts that demand impossible time frames of production, brands are actually at the core of instigating wage theft. 2016 Department of Labor reports found: “the high underlying rate of noncompliance in the industry [results] from the low prices driving the system.” Apparel brands and retailers were found to be paying contract factories only 73% of the cost needed to account for minimum wage payments for garment workers.

MYTH #3: There are only a handful of bad actors who are to blame for sweatshop conditions.

In the tangled web brands have woven, it is impossible to claim that labor abuse is not endemic. As of 2015, 85% of garment workers in California experienced wage theft, a number that has only exponentially increased during the pandemic. Attributing the deeply widespread wage theft to merely a “handful of bad actors” is a failed attempt at hiding the extent of which the California garment industry is in need of a reboot. Current legal infrastructure is insufficient to handle the extent of garment worker complaints.

Wage theft violations in LA county alone are estimated at around $26.2 million per week, ranking LA as one of the highest wage theft locations amongst global garment manufacturing hubs. This is made possible in large part due to weak labor laws in California as compared to the international human rights standards.

While opponents of the bill see themselves as holding a trump card in the underlying threat to pull manufacturing out of California, the reality of international human rights conventions and international labor laws is one that regulates the garment manufacturing space, shaping it into quite a similar climate that SB62 envisions for California. Internationally, joint liability of brands and suppliers is actively under discussion as a baseline legal standard for ensuring minimum wage and ending wage theft practices across the global garment industry, and SB62 presents an opportunity for California to step up as the leader.

How to Support the Garment Worker Protection Act

In their two-fold model of overproduction and underpayment, brands have created a feedback loop that allows them to profit off sweatshop labor while simultaneously justifying their actions with legal loopholes that continue to allow them to skirt liability. It’s exploitation at its most raw and unalloyed form — and it’s time it stops.