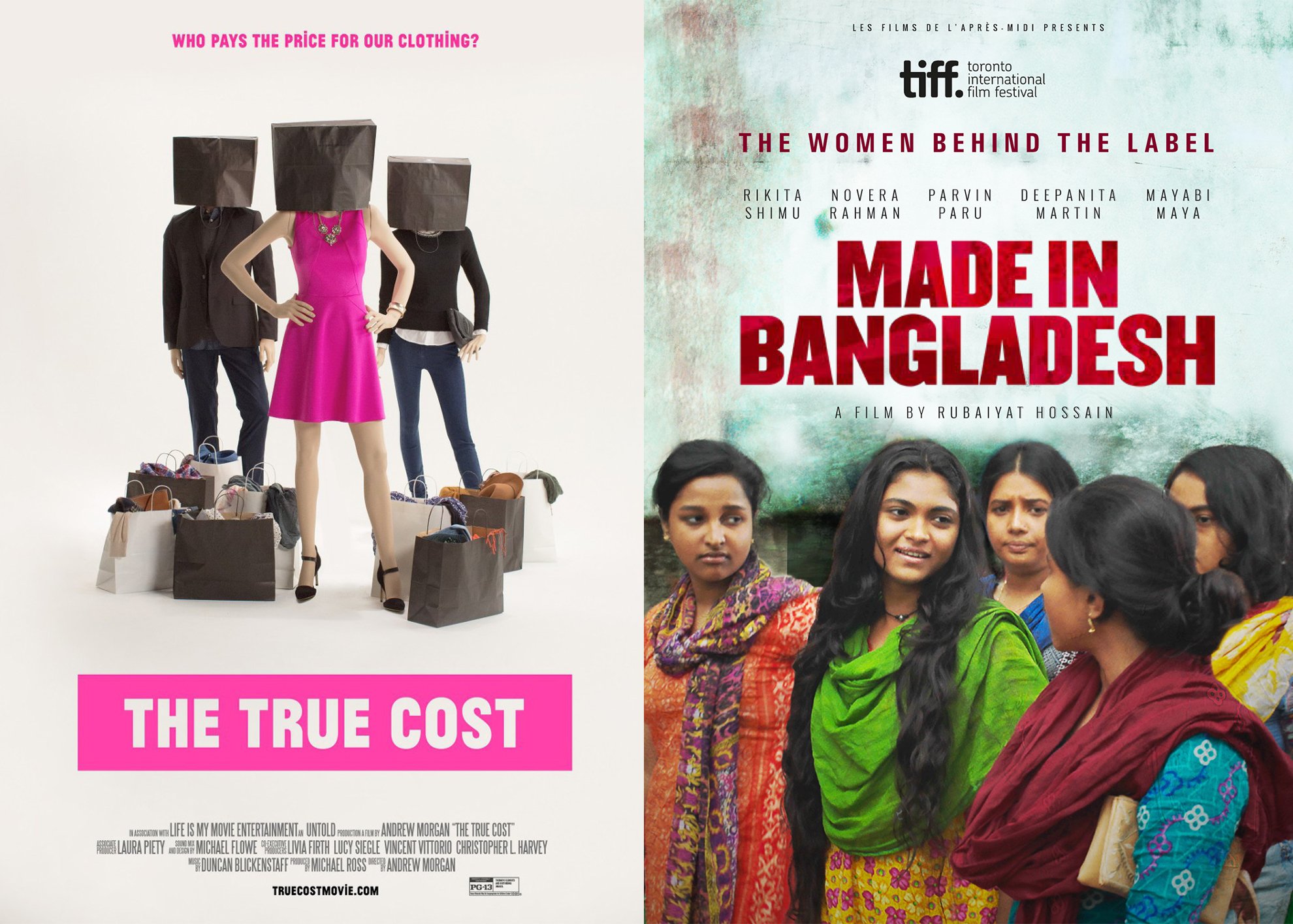 Wanting to learn more about the fast fashion industry and where our clothes really come from? These 12 films about fast fashion document the stories of the men and women who put thread to needle and form the foundation of the trillion-dollar garment industry that continues to put pressure on people and the planet.

Watch These Films About Fast Fashion

The True Cost (2015): Filmed in countries all over the world, from the brightest runways to the darkest slums, and featuring interviews with the world’s leading influencers including Stella McCartney, Livia Firth and Vandana Shiva, The True Cost is an unprecedented project that invites us on an eye opening journey around the world and into the lives of the many people and places behind our clothes.

The Machinists (2010): The Machinists is a 2010 British documentary which follows the daily lives of workers who make clothes for popular high street brands like Primark, H&M and Zara in the garment factories of Dhaka, Bangladesh. It  is the first in a series by the projection company Rainbow Collective on the subject, with Tears in the Fabric and Udita (Arise) following swiftly after. Avoiding sensationalist storylines directors Hannan Majid and Richard York focus on the daily lives of three women garment workers and a union boss who want the fashion industry to stop making a profit at the expense of their workers.

Luxury: Behind the Mirror (2019): From coats to handbags, the demand for brand name fashion accessories is at an all-time high. Beyond the glamorous façade lies a culture that thrives on the exploitation and abuse of its migrant workers. The DW Documentary Luxury: Behind the Mirror infiltrates these factories, farms and tanneries to expose the real cost of high fashion..

Made In Bangladesh (2020): Shimu, 23, works in a clothing factory in Dhaka, Bangladesh. Faced with difficult conditions at work, she decides to start a union with her co-workers. Despite threats from the management and disapproval of her husband, Shimu is determined to go on. Together the women must fight and find a way.

RiverBlue (2017): Following international river conservationist, Mark Angelo, RiverBlue spans the globe to infiltrate one of the world’s most pollutive industries, fashion. Narrated by clean water supporter Jason Priestley, this groundbreaking documentary examines the destruction of our rivers, its effect on humanity, and the solutions that inspire hope for a sustainable future.

The Next Black (2014): The Next Black is a documentary that brings together designers, innovators and leaders from around the globe for an open discussion on the concept of clothing. It probes beyond what we are wearing to explore how we produce clothes, how we interact with them and how we care for them. Each person we interviewed has a fresh perspective on the future of the clothing industry – and all of them are using their passions to fuel change.

Made In America (2021): When we think of fast fashion production, the United States might not be the first country to come to mind. However, the truth is that even in America, garment makers are being thrust into vulnerable situations and being taken advantage of on a daily basis. In Made in America, watch as Remake takes you into multiple Los Angeles clothing factories and talks to local garment makers, designers, and a labor conditions inspector about what is really happening in the land of the free.

Udita (Arise) (2015) : Udita (Arise) follows 5 years in the lives of the women at the grass roots of the garment workers struggle. From 2010, when organizing in the workplace would lead to beatings, sacking and arrests; through the tragedies of Tazreen and Rana Plaza, and to the present day, when the long fight begins to pay dividends. We see this vital period through the eyes of the unions’ female members, workers and leaders.

Unravel (2012): Unravel follows the Western worlds least wanted clothes, on a journey across Northern India, from sea to industrial interior. They get sent to Panipat, a sleepy town and the only place in the world that wants them, recycling them back into yarn.

The Clothes We Wear (2020): We live in an age of hyper-consumption, and nowhere is this more obvious than the fashion industry. ‘Fast fashion’ is the buzzword these days. Driven by glossy advertising campaigns, many consumers are constantly buying new clothes.

Traceable (2014): Traceable is a documentary set against the backdrop of the fast-fashion industry and our increasing disconnect of where and how clothing is made, and the hands that create a garment.

Alex James: Slowing Down Fast Fashion (2016): Traceable is a documentary set against the backdrop of the fast-fashion industry and our increasing disconnect of where and how clothing is made, and the hands that create a garment.

Seen them all? Screen one of these films about fast fashion for a friend to help educate your community and grow the movement.

stay in the know. Subscribe to our Monthly Newsletter.