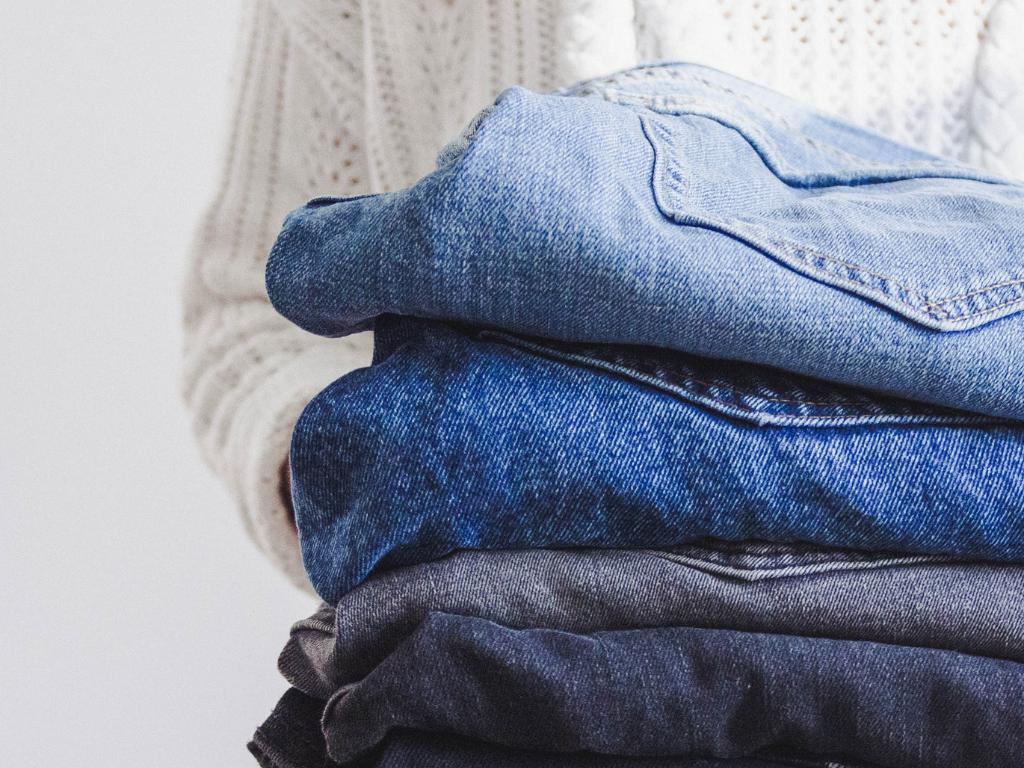 There is a growing trend towards ethical consumerism in the clothing industry as awareness of the harm fashion can cause becomes more widely known. We scrutinize fabrics, supply chains and pay rates, but what happens to our clothes once we’re finished with them? According to a 2020 survey conducted by WRAP, two-thirds of people in the UK choose to donate their clothes to help charities. Surely that’s a good thing —  after all, it’s an opportunity for unwanted clothes to remain in circulation rather than a landfill, right? Perhaps not. Many of us think that by donating our pre-loved garments to a charity or thrift store our old clothes will find a new home where they will be loved and cherished. However, very few actually remain in those stores long enough to get resold. Roughly 25 percent of donated clothes go straight to a landfill, with a further 40 to 50 percent being exported overseas into the secondhand industry. That leaves 25 to 35 percent left in stores. In the U.S., only 10 to 20 percent of donated clothing will be sold domestically.

While the push for brands and consumers to live more sustainably has become increasingly important in recent years, this has nonetheless competed against a backdrop of rapidly increasing production and decreasing wages for garment workers. According to Liz Ricketts from the Or Foundation, an organization working in Ghana and the USA for climate justice in the fashion industry, “many brands overproduce by up to 40 percent.” Even with consumer consumption at such high levels, customers simply aren’t buying what big brands are producing. Virgin textile generation (the process of making new fabrics) increased ten times between 1960 and 2018 – from 1,760 US tons a year to 17,030 tons. The industry produces more clothes than we will ever need. This is not just a problem with individuals overconsuming, but a wider cultural issue of unnecessary overproduction for the sake of profit. The reality is that brands are producing at a rate that is unsustainable for consumers. It makes sense that all these clothes end up flooding charity stores.

So what actually happens to the majority of donated clothes that get exported overseas?

70 percent of global donations end up in Africa, primarily coming from Global North countries such as the USA, Canada and the UK. The USA is the leading exporter of used clothing, accounting for 40 percent of secondhand exports globally. Exact statistics for where the rest of donations end up are unclear, however according to the EPA, 16 percent of donations that actually get used. Alongside this, we know used textiles that get exported to countries outside of Africa, such as Chile and Guatemala, are incinerated and likely go to domestic landfills. Cities such as Accra in Ghana, Kampala in Uganda, and many others in countries like Côte d’Ivoire and Burkina Faso, are flooded by an estimated four million tons of used textiles every year, known by Ghanaians as “obroni wawu” – or “dead white man’s clothes.” This amounts to a phenomenon known as waste colonialism, where old colonial patterns and power dynamics are continued through the modern system of industrial waste (in this case, fashion’s waste). Kantamanto Market in Accra is an epicenter of this. 60 shipping containers full of secondhand clothes enter the market every week — that’s 3,120 containers every year — and while the market has the capacity to process 2,000 metric tonnes of waste per day, the workers there are faced with almost double that in donations from abroad. Markets like Kantamanto were not set up to deal with the rapidly increasing rate at which clothes are being simultaneously produced and discarded in the Global North. Workers in Kantamanto are unable to upcycle, repair, or sell donated clothes at the same rate that they enter the market, and thousands of tonnes of garments get left behind in the process.

On a podcast with Remake’s Emily Stochl, Orsola de Castro, co-founder of Fashion Revolution, described how people are using clothes donation as a way of “dumping” their clothes, using charity shops as feel-good trash sites rather than as a means of keeping their clothes within a circular system. Orsola highlighted how frequently people donate clothes that are stained, worn out, ripped or broken, or contaminated by mildew. This is a symptom of the current disposability culture around clothing, as the end of a garment’s life is not considered by producer or consumer. Her concerns echo testimonies from resellers working in Kantamanto and other secondhand markets where garments are being donated with “collars ringed with sweat, buttons missing, bloodstains on the sleeve” and are unable to be sold on as a result. ‘Donating’ in this sense becomes little more than waste dumping.

A lot of the time donating our clothes is an easy way to clear out our closets — out of sight, out of mind. In our heads, the clothes go to someone who will make use of them. However, the reality of that occurring is actually quite low. About 40 percent of the clothes that arrive in Kantamanto Market go straight to landfill because they are in an unusable condition. If so many clothes are being donated in such bad condition, we have to reflect on the attitudes of the people who donated them. For people to donate clothes in that condition believing they will go to people ‘in need’ suggests an attitude of superiority and otherness from donors towards people in the Global South. Why should someone else be happy with a stained or broken garment if you’re not? Old colonial power dynamics and ideas are prominent with the suggestion that black and brown people in the Global South would be fine with the unwashed castaways of the Global North.

While the secondhand trade has become integrated within local economies in cities such as Accra, the sheer amount of clothing being sent overseas has risen to dangerous levels. The Kpone landfill is just one example of this. It was created in 2013 with a $9.5 million budget from the World Bank as a way to deal with the clothing waste crisis. It was supposed to run for 15 years, but instead filled within five years and caught fire in 2019, putting homes and lives at risk. While waste clothes are sometimes incinerated or combusted intentionally by big brands such as Burberry and H&M, this fire was not planned and was caused by a build-up of methane in the meters-high mile of discarded clothing. The fire at Kpone burned for 11 months. In March 2022, a smaller fire resulted in 15 waste pickers working at the landfill to lose their family homes and property. Although this site is now closed, these will not be isolated incidents if the build up at similar landfills elsewhere continues, with potentially deadly consequences for workers.

The landfill at Korle Lagoon, also in Accra, is comprised of approximately 60 percent of unwanted clothing. On a cliff that reaches up to 20 meters high, cows graze. They literally eat rubbish, likely ingesting plastic from garments made out of polyester. During monsoon season, clothing in landfills such as these gets washed away, leading to blocked drains and polluted rivers and seas. This causes an increase of risk for flooding and spread of disease on top of those already heightened health risks as a result of changing weather patterns, rising sea levels, and the Covid-19 pandemic. Around 100,000 people live in Old Fadama slums right next to Korle Lagoon, meaning they live with a cliff of discarded clothes on their doorsteps. Overfilled landfills in the Global South are a serious health and safety hazard, mostly affecting those who have contributed very little to the issue themselves. Through this waste and pollution, colonial systems persist as the consumer behaviors of those in the Global North dominate the health and lives of those living in previously colonized countries.

Now That We Know the Problem, Are There Alternatives?

There are so many ways to elongate the lives of our unwanted clothes, including many ways that place garments directly into the hands of their next wearers.

You can exchange unwanted items at a clothing swap, give them away to a friend, sell them online, donate them directly to on-the-ground organizations working with people who need new clothes immediately, or make them into something entirely new (cushion cover anyone?). As caretakers of our clothes, we have a responsibility to ensure that they have the longest life possible.

However, we also need to collectively reassess our consumption habits. Brands have no other option than to find channels for degrowth in order to stop the intense flow of clothing at its source and consider the diminishing lifecycle of their products. On the same note, consumers must slow down their consumption. Demands for degrowth among big fashion brands directly coincides with a culture change around consumption. Value needs to be put back onto clothes so that we no longer buy items we don’t need to make us feel good for a split second and then, in a rush to avoid the guilt of that purchase, put the burden of dealing with those unwanted clothes quite literally onto the backs of women working in markets like Kantamanto, Ghana and Owino, Uganda. A great way to start slowing down your fashion consumption is to commit to a period of ‘no buy’ through campaigns like Remake’s #NoNewClothes Pledge. The aim of the campaign is to not buy new clothes for three months. Research suggests that it takes 90 days to break or make a habit, so taking part in your own #NoNewClothes journey is a great way to reduce the amount of clothes you purchase, and subsequently, discard over time.