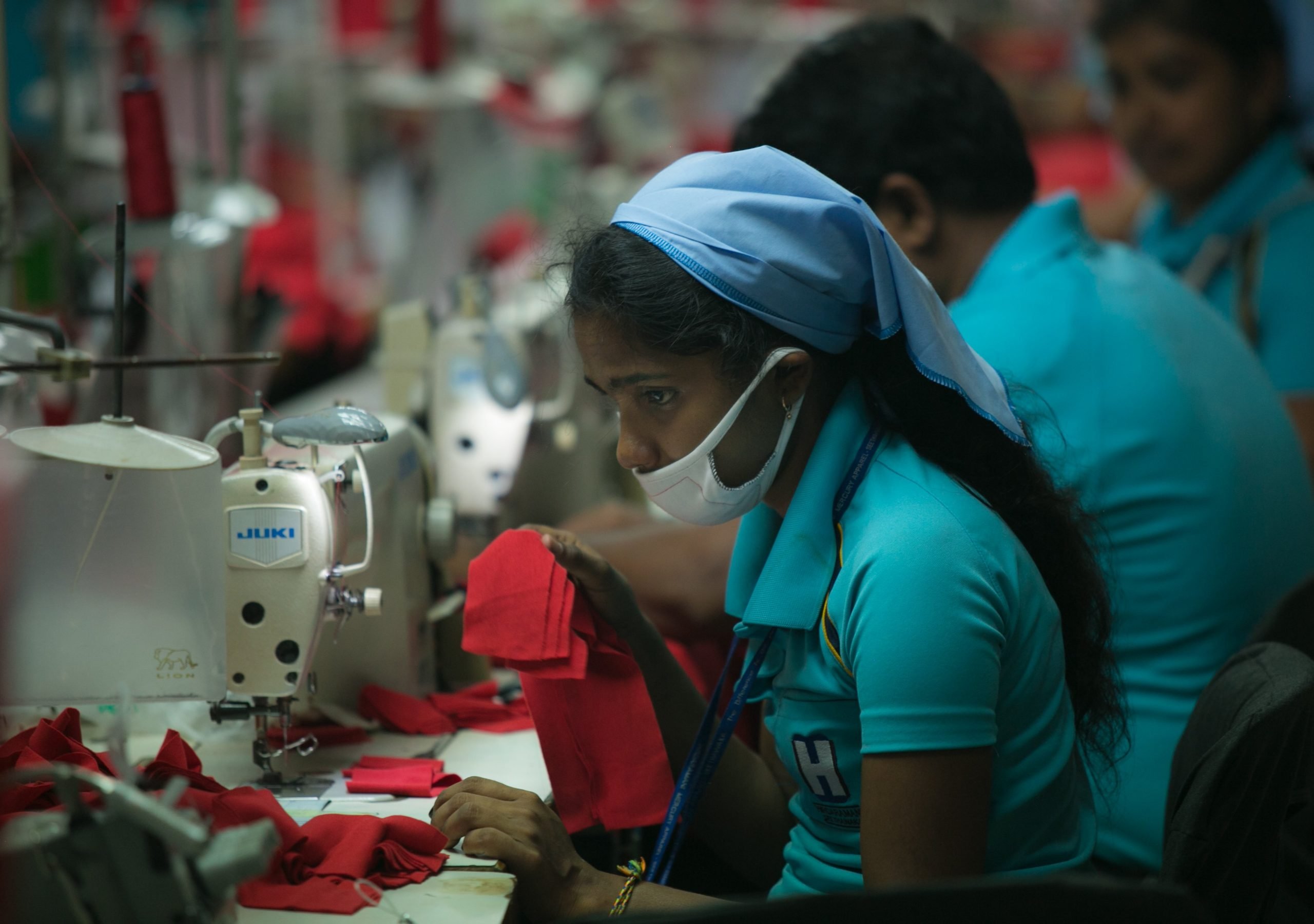 Mallory was raised in Salt Lake City, Utah and now attends California College of the Arts. She began taking sewing classes at the Salt Lake Community college, but her love for sewing and crafting goes back as far as she can remember. “I am passionate about bringing the human element back into the way we think about clothing.” 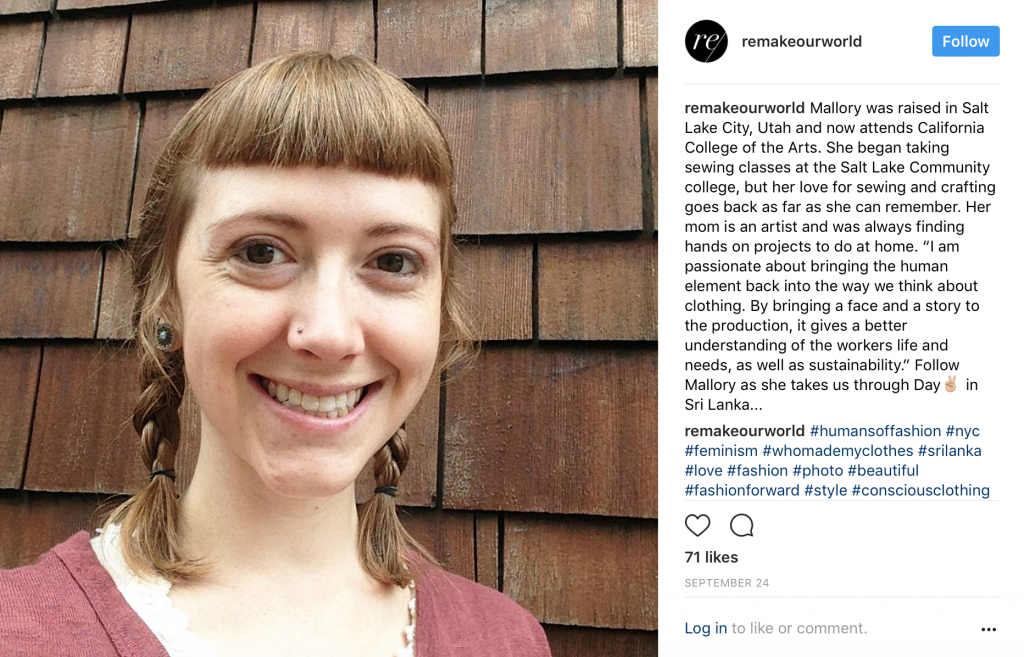 When I first found out I was going my heart leapt from my chest. Our school had set up a competition for our entire junior class, the winner would be able to go with Remake to Sri Lanka, to interview the workers and get a better idea of the garment industry. Every time I looked at my project all I could think was I how badly I wanted this. I couldn’t even think about winning because I didn’t want to deal with the disappointment I would feel if I lost. When they finally were announcing the winner names I avoided eye contact trying to keep my emotions under wrap.

And then they called my name. The emotion, excitement, adrenaline, relief, and joy all came out at once.

I was pulled out of class to be interviewed. How did I feel? What was I excited for? I felt like the whole world was glowing and I was in the center. I was excited for everything…my mind swam with the possibilities of what I was about to do. First things first: I had to tell my parents. They live a few states over and had been anxiously checking in on my every hour, waiting to hear. I called my mom first.

Both of my parents had told me the entire summer that when I won I was going to have an amazing time and I had corrected them for months. ‘I don’t know who’s going to win. There is a really good chance I won’t even make it through the first round.’ And now here we were, me preparing for the worst, both of them preparing for the best and neither one of us prepared for the shock and excitement of the reality.

The race to get ready was crazy and before I knew it I was at the airport about to board my first ever international flight. The flight was long, and I was excited the entire 21 hours, finding every detail amusing: the in place touch screen TV’s, the elaborate floral displays in Singapore’s airport, but most notably all the tiny, individually packed plane food!

1 a.m. we arrived at our hotel room, our first day starting in 6 hours. We met the rest of the team over breakfast and loaded up in the van to start our journey. I eagerly stared out the window, taking in everything from this brand new world. So many new things, so much to take it: The level of poverty and luxury, destruction and high end all existing so closely was a shock.

A building would be completely decayed and right next to something beautiful with a huge fancy fence telling everyone else to keep out. The amount of shrines in public spaces: Buddha’s set up in front of businesses, in the median of the street, in public space. They were huge, small, expensive, cheap and everywhere. Everything felt packed in so tightly.

Multiple businesses were stacked so closely together, like books, lining the streets.

The traffic was dense and the driving crazy: our bus driver giving anyone who looked out the front window a heart attack or our tuk tuk (rickshaw) driver dotting in and out of traffic, swerving around trucks and speeding down side alleys. I was constantly finding something to ogle over or be amazed by from the grand to the mundane. It was all fresh to my eyes and I loved it.

We saw so many things in the short week we were there, but a few key moments really left the biggest impression on me.

The inspiring humans we met:

Our first day was packed with both meeting Ashila from Stand Up Lanka and the women who live in the boarding houses. Ashila created a nonprofit to help educate factory women on their rights and sexual wellbeing. She is a small organization with only a few workers and an amazing staff of volunteers that go door to door, inviting women into the conversation and giving them a space to ask questions. The second place was one of the boarding houses Ashila was associated with, men and women, both living in tiny rooms with a shared bathroom and commons area. The occupants worked in every sort of factory. We were able to get a broad understanding of the lifestyle and situation these people had to deal every day. Underpaid and over worked were the statistics I was expecting to hear, but the fact that 95 percent were educated and they were looking to work extra hours was a completely new story that I hadn’t expecting to hear.

Also being away from mere numbers on a screen, or images of a faraway place and being with the people was very different then I could ever imagine. I wasn’t here to pity them, or save them, just hear them.

The statistics are about real people, all with very diverse stories and reasons for being there.

They were both amazing conversations and a quick taste of the real women behind the clothing.  Hearing their stories was an eye opening way to start the trip. Right off the bat we had context of the human element of the fashion industry and everything we would see after would be affected by this first interaction.

We were able to sit down with a few foundations from the fashion industry and discuss what they are doing and what they hope to accomplish. I was able to share my own ideas and fears about moving forward in fashion. After seeing everything that we were up against it is easy to become overwhelmed. To talk with people who were passionate and working to make a difference made me feel less overwhelmed and ready to be a part of the solution.

The reality of a modern day factory:

The factories were clean, and bright and new. These were the best of the best, the pinnacle of garment factories in Sri Lanka. They informed us of their sustainable programs, research and innovation. All this was discussed in a well air conditioned room, with coffee, tea, snacks and cake. Now for what we had really come for: we left our treats and our preconceived assumptions as well as the beautiful images that had been played for us in our boardroom meeting and ventured to the floor.

It was all the little things that hinted at something going on behind the curtains.

Rows and rows of red digital clocks ticked away the seconds as the workers sped through the orders, a non-stop fast paced buzz hummed through the silent women working back and forth without looking up. The humidity of the work space versus the office rooms, chemicals stuck in its haze. The lack of protective footwear, most wearing flip flops, some not wearing any shoes at all. During one of the tours I noticed fun music being played over the sound system.

Later we went back into the factory unannounced and there was no music to be heard. Another factory told us about their low waste achievements and we noted that the garbage’s were completely empty, but while we walked through the quality control room we watched large portion of fabric get cut away, unfit for production. When we asked to speak to the makers on the factory floor they sent us office assistance claiming they were garment worker. Many small things didn’t add up, and so the suspicion grew, not knowing what truth was and what was the story told to every tour, brand, and imposter who came into their work space.

It’s not that the conditions are particularly harsh, but the rigorous nature of the work is what is intensive. When interviewing Ashila she said that many of the women will skip lunch and avoid bathroom breaks to make enough money during their shifts by hitting production incentives. Many voluntarily take on over-time, their pay not even coming close to a livable wage.

Many have a bad reputation for being a garment worker, or “Jhuki Girl” as they are negatively referred to. Makers are often from small town (65% being rural, unmarried and 18-35 year old), and have left to pursue a job in the city.

The connotations made with a single woman leaving the home to make money are already negative, but some have also been known to turn to prostitution when their income was still too low.

This has created a stereotype for the women as leading a life outside of tradition and possibly one of moral shame. The ones that are married often face criticism and abuse because of this. As outsiders they have little support or pride in their work, one worker claiming she would rather do “anything other than this.” Knowing their rights as employees and human rights as women is a huge step in changing the attitude the workers have towards themselves, environment in the workplace, and social stigmas.

I see now that sustainability and fashion design are not two separate subjects but one design focus. Sustainability needs to be a part of the process just like inspiration, market research, a color palette and fabric. In the world we live in today we need to move past the idea of clothing that keeps the planet and its people in mind as a racial or far out idea. This should be a given, the base that we build upon. We need to support brands that are making that switch or are pushing the boundaries of industry.

Every purchase is a vote:

Know who you are supporting when you buy. One of the factories shared how they were experimenting with more sustainable practices but noted that “the consumer leads production and had rejected the idea” opting instead to reward the cheaper option. One factory let slip that where they once had 21 days for turnover, the average number was 12 days with some brands demanding a 7 day turn over. To meet these unrealistic goals they have to keep everyone working through the night.

This was a life changing experience and I will never be able to look at fashion the same because I now know the role I play a role with in it. We aren’t going to be able to change the way fashion is bought and made overnight, but the more people understand the system, the more informed their choices will be. I don’t want the women in Sri Lanka to lose their jobs, I want the fashion industry to stay in these countries and provide opportunities. A living wage, women’s empowerment programs and sex health education are all reasonable things for designers and brands to be thinking about. Fashion isn’t just about making pretty things; it’s all the steps and hands that touch it in between conception and consumption. It will take many parts, from the government to policy, factories to embrace standards and brands to really walk the walk.

As consumers we have a direct vote in the system and can be a part of the solution.

Let’s invest in our clothes and reward brands that are doing better. Avoid cheap products and push companies to talking about living wage in their code of conduct. And, most importantly let’s spread the message.