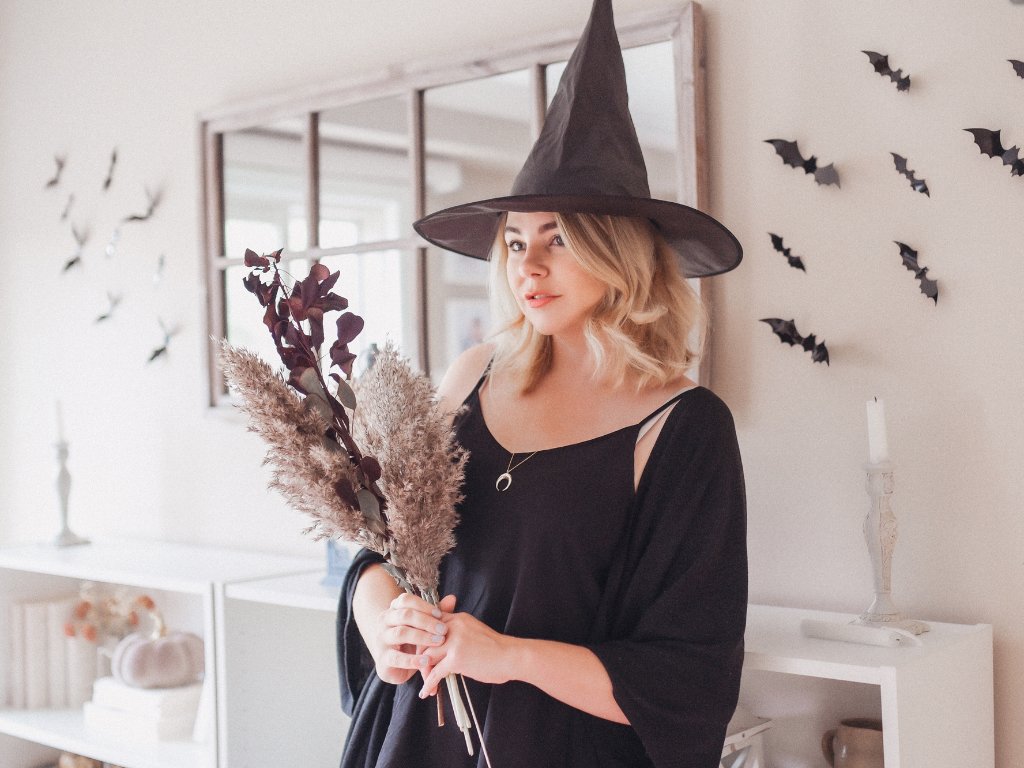 As a fashion industry professional, I’ve always viewed clothing as wearable art, a visual language that expresses who you are. But costumes take that to another level; they allow you to dress up as something you aren’t – it’s true escapism. But like plastic straws, Halloween is essentially a “single-use” holiday. This, coupled with the influx of companies manufacturing poor quality fast-fashion costumes makes it highly problematic when viewed through a sustainability lens. Here’s how you can make a fun, unique, creative and sustainable Halloween costume this year.

Is Your Halloween Costume Sustainable?

I’ve loved Halloween for as long as I can remember. As a child, my mother would often sew costumes for me, which sparked my interest in fashion. When I got older, October became pumpkin lattes and costume-making month. But are homemade costumes actually more sustainable than store-bought costumes, like those from Shein or seasonal costume shops? Is there a way we can act more responsibly during a night dedicated to mischief or are we doomed to wear the same costume year after year?

[One study found] that the average costume sold on H&M’s website was made of 93.3% polyester material followed by other harmful plastics and chemicals such as elastane and polyamide.

I think that we can view sustainable Halloween costumes  by a few metrics: (1) how much waste is created, including how long the garment’s life cycle is; (2) where the materials are sourced from; and (3) the quality of materials used. By these metrics, I’ve fashioned several sustainable alternatives, mainly by using what’s in my wardrobe (minimizing the use of virgin materials) or buying from second-hand stores, which addresses waste issues.

In October 2019, two environmental change organizations, Fairyland Trust and Hubbub, conducted a study of 19 UK retailers to track the use of plastics and other harmful materials in Halloween costumes. Among the retailers surveyed were ASOS, Amazon, Boohoo, H&M, PrettyLittleThing, Topshop and Zara. The investigation recorded the plastic levels in 324 articles of clothing sold through online platforms, concluding that 83% of retailers used oil-based plastics in their costumes.

The study went on to find that the average costume sold on H&M’s website was made of 93.3% polyester material followed by other harmful plastics and chemicals such as elastane and polyamide.

So, is there a way to still play our Halloween season fantasies without harming the environment in the process? Absolutely.

My go-to classic ghost-with-a-twist costume generated minimal waste and repurposed old bedding; I’ve worn a cavewomen dress through several life stages; and my Snow White and pirate costumes were made from good quality fabrics. Utilizing materials and previously purchased clothes from my wardrobe, I created Leela from Futurama, Misty from Pokémon, and a satire of the infamous Marc Jacobs’ Spring 2017 collection

Another resource is second-hand clothing or clothes swapping with friends and family. Many of the clothes are pre-loved and inexpensive so there’s no regret in buying something you may only use for this year’s Halloween costume. My Ace Ventura costume was made from repurposed clothes from Goodwill, and to become Cruella de Vil, I wore my mother’s little black dress from the 80s and sewed a faux fur snow leopard coat.

I’ve also pulled items from my everyday closet to create costumes like Bubbles (from The Powerpuff Girls), Forest Demon, and Renaissance Unicorn — or at the very least, purchased pieces of clothing that I know I will wear again and again.

Using what you already have in your closet is key to wearing your values. The Fairyland Trust and Hubbub study found that over 30 million people dress up for Halloween each year, with over 90% of families purchasing or consider purchasing store-bought costumes. Alarmingly, the investigation found that in the UK around 7 million Halloween costumes were thrown away every year, less than 13% of clothing material manufactured were recycled and only 1% of clothing textiles were recycled into new clothes.

To ensure Halloween is not a “single-use” holiday, my costume philosophy is to keep everything and repurpose them as often as possible. This act extends their lifecycle and is much more sustainable than one time costumes made with cheap materials purchased from fast-fashion websites.

While I have a deep-seated obsession with making and wearing costumes, my partner of 12 years does not share this love. In fact, we couldn’t be more opposite. I even joke that he’s a “Halloween Scrooge” because he views Halloween as a child’s holiday, stating that costumes are only for children. So each Halloween season, I have to rack my brain to figure out what costume I can fashion for him, then twist his arm to get him to agree – it can’t be too fussy, hot, or uncomfortable. Over the years, what I’ve learned from making his costumes is that there is inherent sustainability in simplicity and abstraction. This is best demonstrated with our Homer and Marge Simpson costumes.

Leading up to Halloween, our friends would ask me if I was planning on painting our skin “Simpson yellow” or if I would give Dan a big beer belly and a bald cap. But of course, all those things would be “too elaborate” for him. Besides, I had a very clear vision for his costume this year, and all I needed was some paper and a white polo shirt.

Simplicity and abstraction can actually be more exciting and lead to unexpected outcomes that are likely much more sustainable than cheap store-bought costumes.

On Halloween night, 2014, we drove to our friend’s house. They marveled at my blue spray-painted beehive hairdo and green organza dress I designed with a friend, but asked why Dan wasn’t in theme. I ignored their confused expressions, knowing it would all come together in the end. We piled into the car and drove to a local bar in The Valley.

We sat in a booth and ordered some beers. When the drinks arrived, I pulled out my “secret weapon” and sneakily handed it to my husband. He slipped the custom Duff beer koozie on, and without pause, the guy at the table next to us erupted in laughter. He stood up and clasped my husband’s hand, complimenting the HILARIOUS costume which identified him, clear as day, as Homer Simpson. 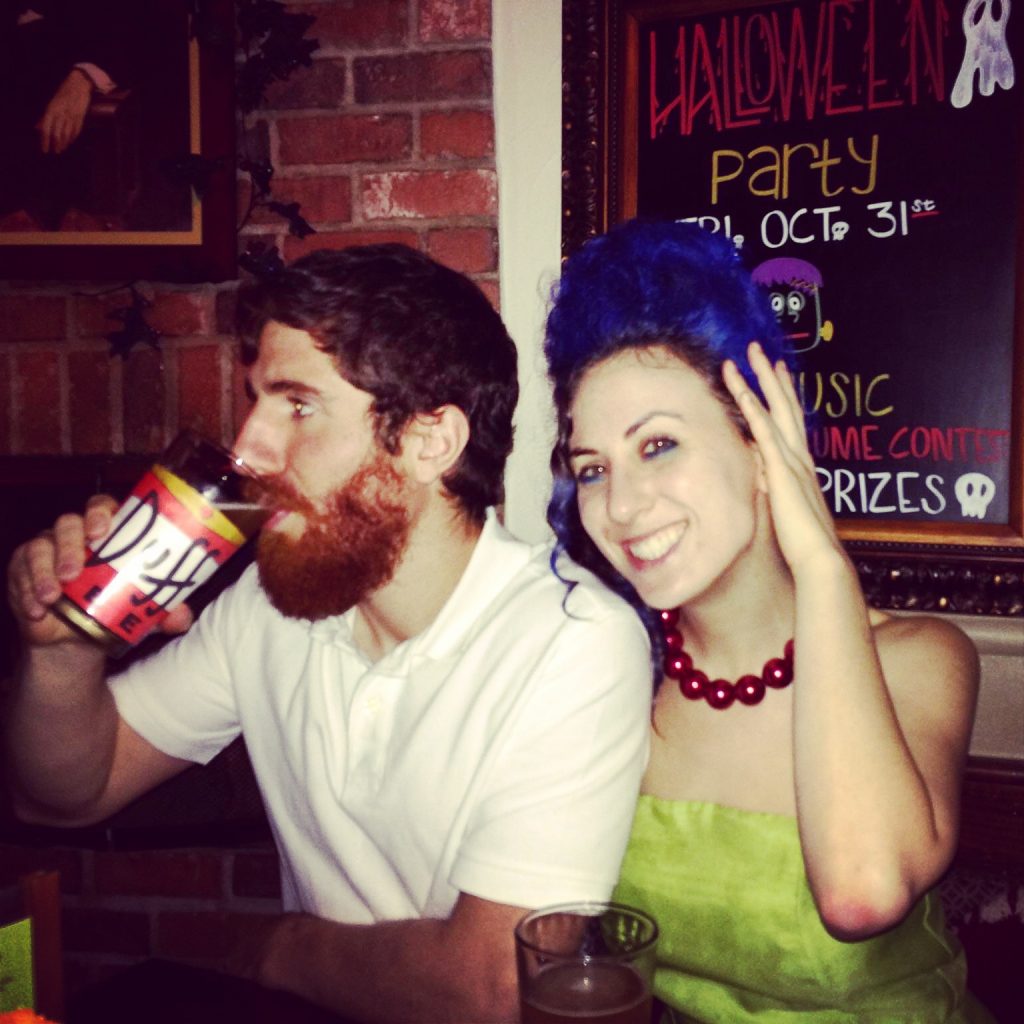 The point of this story is to show that sometimes, the simplest things can actually be wildly impactful. Thinking abstractly and outside the box can even be more compelling than taking something literally or at face value. Simplicity and abstraction can actually be more exciting and lead to unexpected outcomes that are likely much more sustainable than cheap store-bought costumes. Ultimately, restrictions breed creativity. Isn’t that what we all want, to play without feeling guilty? My husband didn’t need to cover his face and arms in body paint, wear a pillow under his shirt, shave off his beard, or put on a bald cap to be recognizable as Homer Simpson. He just needed a 4” x 6” piece of paper.

Want More tips on costuming sustainably this Halloween? Check out This article on reuse and restyling for OCt 31st!