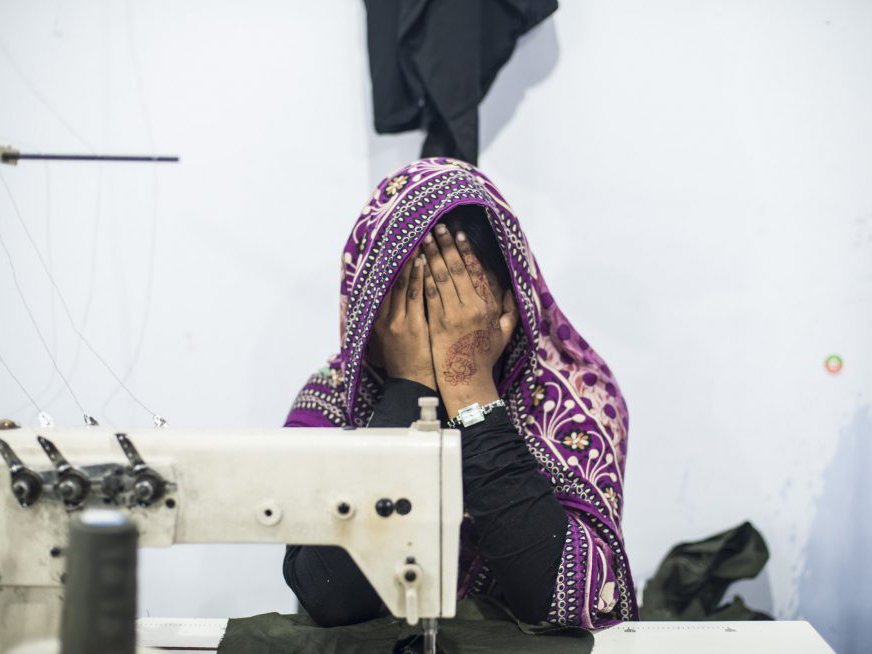 April of 2020, more than 1,000 garment factories in India have refused to pay their garment workers the minimum wage, as they toil for some of the world’s biggest fashion brands, including H&M, Zara, Nike, Abercrombie & Fitch, and American Eagle Outfitters.

To date, the makers, many of them young women who barely earn enough to eat anything other than rice and chutney, are owed more than $50 million in what is considered one of the largest instances of wage theft in fashion history. This crisis impacts 400,000 garment makers.

After the commitment of one large export factory earlier in February, Shahi Exports, to pay garment workers what they’re owed, many workers at other suppliers are still fighting for their pay. Shahi’s 80,000 workers are finally set to get their $10 million owed. Now, brands must ensure that the rest of their suppliers in Karnataka follow suit and receive their wages immediately.

Here is how they responded:

Thank you for your email regarding the disputed minimum wage payment in the State of Karnataka, India.

We have only one supplier, Gokaldas Exports (GE), in Karnataka, which we have continuously communicated with, to settle the workers’ arrears payment and adopt the DA adjustment set by the government. GE has recently confirmed that they will implement the correct DA value, effective from January 2022 and will pay, in full, the arrears owed to workers. We also confirm that the prices adidas pays for orders meet all legally mandated wages and benefits. We have no plans to exit this longstanding supplier.

Hope this message finds you well.

Thank you for reaching out about this important topic.

As you stated correctly, to not pay legally mandated minimum wages is a serious violation of our Sustainability Commitment (our code of conduct). We have made it clear to our suppliers in Karnataka that they must pay the workers legally mandated minimum wages including all arrears. As of today, all of our suppliers in Karnataka are adjusting their monthly wage payments so that the increased dearness allowance (VDA) will be included in the wages paid to workers.

In addition, the majority of our suppliers’ factories in Karnataka have committed to pay the 2021 arrears and the 2020 arrears by mid May. We are urging the remaining suppliers to align on the same payment schedule. If they fail to do so, it will ultimately lead to serious business consequences. We will continue to closely monitor and follow up on this.

Please get in touch if you have further questions.

Good afternoon to the teams at  PayUp Fashion Coalition,

Thank you for your email regarding the ongoing wage violations taking place in South India.

I would like  to confirm to you that all of our contracted factories in South India ( Karnataka ) are paying the revised minimum wages, in compliance with legislative standards, and our own directly employed ethical teams in India have verified such payments made to workers.  I would also like to confirm that Shahi is not a current active factory for NEXT.

We would also like to direct you to our response which is now available at:

We trust that this will provide you with the information you requested regarding our due diligence on this issue.

Thank you for your email.

At M&S, sourcing ethically and sustainably is core to how we do business.

In Karnataka, we have been working with the Ethical Trading Initiative and Brands Ethical Working Group to demand that all workers in Karnataka are paid the Mandatory Minimum Wage and all arrear payments of VDA. We engaged with our suppliers in the state directly last year, making clear our expectation that these conditions be met with immediate effect. Many of our suppliers have already made these payments. As this issue affects all industries in Karnataka and not just the garment industry, we will also continue to be part of the collaborative effort.

At Primark we are committed to supporting the welfare and livelihoods of the people who make our clothes and we take our responsibilities to them very seriously. We are deeply concerned by the reports of failure by factories’ in Karnataka to pay the legally mandated increases in VDA and associated arrears and welcome the opportunity to respond.

Since October 2021, we have been working with all suppliers with Primark-approved factories in Karnataka, the ETI and other ETI-member brands to progress this issue.

Although not one of our suppliers, we welcome the positive announcement by Shahi Exports to pay the legally mandated increases in VDA and associated arrears by May 2022 and are encouraged by the positive impact this seems to be having on decision making around this issue.

We can confirm that all suppliers with Primark-approved factories in Karnataka have agreed to pay the VDA and associated arrears. We continue to work with them on a payment plan and our team on the ground in India will review in detail to give us the assurance that the calculations are correct.

As the DA is a legal component of minimum wage, it is covered by our Code of Conduct for Production Partners. Our Code of Conduct stipulates that UNIQLO suppliers must comply with local laws and regulations and meet the relevant minimum wage standards. All our suppliers in this region have now committed to paying arrears of the 2020 VDA over a series of payments. We will closely follow up their actions and if order practices need to be adjusted, including price, we will take action accordingly, based on feedback from suppliers and our responsible purchasing policy and guidelines.

Thank you for getting in touch. We would like to emphasize that Inditex takes this issue extremely seriously. Inditex has a strict Code of Conduct that requires all factories which make up its supply chain to pay legal wages as a minimum, and states that wages should always be enough to meet at least the basic needs of workers and their families and any other which might be considered as reasonable additional needs.

This commitment to living wages is undeniable and we work holistically to enable the workers in our supply chain to receive a living wage through the promotion of collective bargaining and responsible purchasing practices, in addition to enhancing production and management systems, wage digitization and financial inclusion.

As part of this work, Inditex is an active member of ACT, which is a ground-breaking agreement between global brands and retailers and trade unions to transform the garment, textile and footwear industry and achieve living wages for workers through collective bargaining at industry level linked to purchasing practices. ACT is the first global commitment on living wages in the sector that provides a framework through which all relevant actors, including brands and retailers, trade unions, manufacturers, and governments can exercise their responsibility and role in achieving living wages.

Regarding your specific query, we would like to inform you that all the 8 factories in our supply chain in the state of Karnataka, of which there are less than 10, have received a clear communication from us, asking them to commit to the payment of any outstanding dearness allowance (VDA) referred to in your letter since April 2020.

We can now confirm that all of these factories in our supply chain have either already paid or committed to pay the amount. We are monitoring the commitment on a regular basis and we continue to engage with these factories to ensure that 100% of the payments are made soon, and no later than by wages paid for April 2022.

Thank you again for getting in touch.

Take Action By Demanding The Aforementioned brands: #Payyourworkers and stop the #worstwagetheft in Fashion’s History by tagging them on Instagram

The brand responses noted in this article were last updated on 2/14/22.