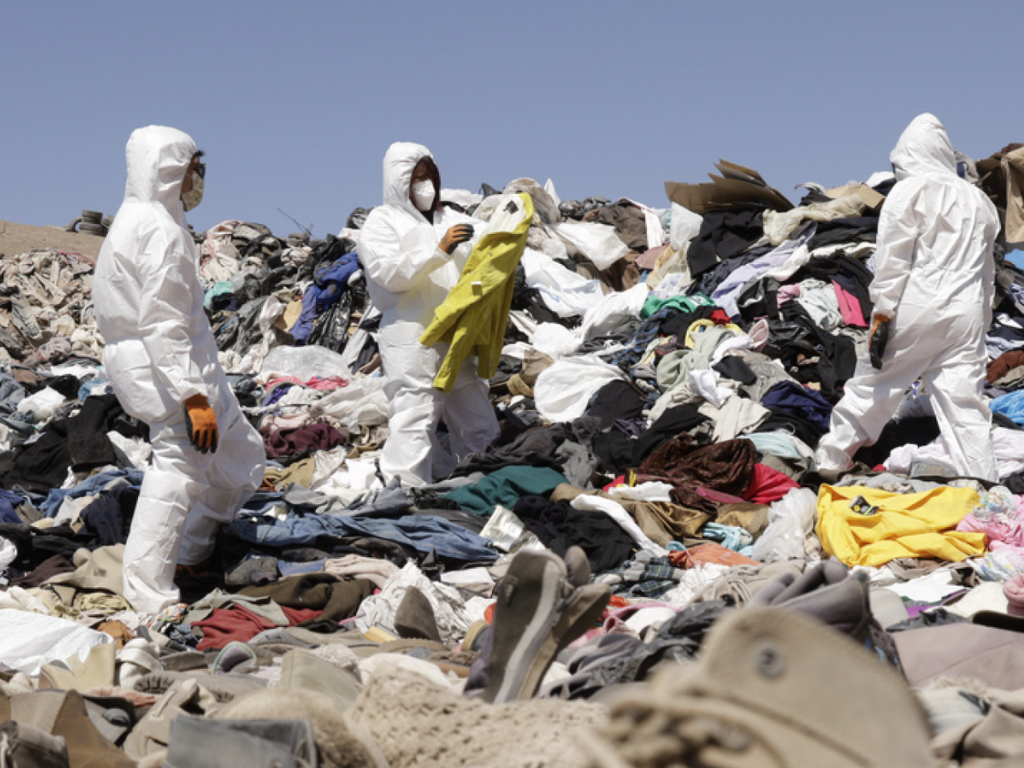 Fashion and climate change — how linked are the two? The fashion industry is a major contributor to the climate crisis. According to 2020 Fasion on Climate report issued by McKinsey, the global fashion industry produced around 2.1 billion tonnes of GHG emissions in 2018, equalling 4% of the global total that is driving the planet dangerously close to catastrophic global warming conditions.

We are currently living in a time when urgent action is necessary to save our planet. In response to the state of emergency, The Fashion Industry Charter for Climate Action was created with the goal of reaching net-zero by 2050, in order to keep global warming under 1.5 degrees. So, how are big fashion brands currently measuring up? Simply put, they have a lot of work to do.

True circularity should reduce and eventually replace production. Instead, the promise of circularity is benefiting corporations by bringing them more profits and encouraging even more consumption.

Every year, Remake releases a Fashion Accountability Report, scoring companies on their progress towards social and environmental justice goals. The 2022 Brand Accountability Report evaluated 58 of the world’s largest companies in areas of environmental justice, traceability, raw materials and well-being, and featured 15 small- and medium-sized enterprises that are leading the way in sustainable practices. As an independent third-party resource, Remake is dedicated to holding brands accountable and has a proven record for calling out bad actors and successfully leading concrete change across the fashion industry. So, here’s what we found out about how major fashion brands are fairing in the world’s fight against a worsening climate crisis.

CIRCULARITY IS THE NEW GREENWASHING

Circularity is the latest buzzword in the conversation of tackling climate change. Many now believe that a circular economy is our best chance at solving our issues of global warming and resource depletion, and quite frankly, our survival.

Brands and consumers alike are embracing the idea of circularity. In the 2022 Fashion Accountability Report, 24% of the assessed companies have participated in resale initiatives to sell the companies’ own pre-owned products and 24% provided upcycling or repair services. However, no large company of the 58 evaluated demonstrated that they are using these revenue streams to reduce reliance on the production of new products.

Despite embedding resale and upcycling initiatives into their businesses, brands show no signs of slowing down as they pump out new products. As the resale market booms, circularity is frequently used as a greenwashing scheme to entice consumers. True circularity should reduce and eventually replace production. Instead, the promise of circularity is benefiting corporations by bringing them more profits and encouraging even more consumption.

To achieve full circularity, the fashion industry must address its overproduction problem. The volume of waste created by the insatiable demand for fast fashion has devastating consequences on the planet and people. The usage of Ghana and Chile as dumping grounds for secondhand clothing from the Global North also expose the injustices and inequality ingrained in the current systems and how communities are disproportionately affected.

FUTURE OF FASHION: CIRCULAR AND NET-ZERO

As the fashion industry moves towards a circular model and net-zero emissions, companies are making strides by improving their disclosure of carbon emissions and setting aggressive science-based carbon reduction goals. Transparency is key to measuring progress and genuine impact while holding the companies accountable to their promises.

According to Remake’s 2022 Fashion Accountability Report, 59% of companies report their carbon emissions across their entire value chain. 47% have set short-term emissions reduction targets approved by the Science Based Targets initiative.

Lululemon has nearly doubled total emissions since its baseline year of 2018. LVMH’s (Louis Vuitton, Celine, Dior) emissions have climbed by more than a million pounds between the latest and the previous reporting year.

This is a good start, but progress is slow. Only three companies demonstrated a reduction in their total greenhouse gas emissions, while multiple companies increased their emissions. At the top of the list, Lululemon has nearly doubled total emissions since its baseline year of 2018. LVMH’s (Louis Vuitton, Celine, Dior) emissions have climbed by more than a million pounds between the latest and the previous reporting year. It is worthwhile to note that the pandemic has also led to slower sales which may have contributed to lower baseline numbers and inflated rate of reduction.

According to McKinsey, more than 70% of the fashion industry’s emissions come from upstream activities, such as energy-intensive raw material production, preparation, and processing. Therefore, adjustments to supply chains are essential. In the 2022 Fashion Accountability Report, only 19% of the companies were able to demonstrate that they are investing in suppliers to decarbonize.

In order to make circularity and net-zero emissions a reality, companies need to invest in its supply chain at all levels, from raw materials to manufacturing. Most importantly, they must also support the labor force.

A sustainable supply chain is made up of the responsible sourcing of raw materials, as well as actively supporting the wellbeing of the communities and biodiversity affected.

Across the industry, we are seeing some interest and investment in regenerative agriculture and animal welfare policies. One company — Reformation — demonstrated that its usage of biogenic materials that strive to be net positive is increasing, with a time-bound target to reach 100%. Twenty-nine companies (50%) maintained a policy against the use of furs and exotic skins, but only six companies (10%) demonstrated year-on-year progress towards traceable and certified fibers sourced from animals.

The biggest challenge still lies in the gap in reporting. Brands are unable to deliver sufficient data and details to prove that they are making headway in sourcing responsibly and ethically. There were’t any companies that sourced recycled polyester transparently while also phasing out all materials that lack a textile-to-textile solution. Similarly, no company adequately demonstrated that it actively protected the labor, human rights and the wellbeing of raw material producers.

There has been a growing movement towards greater transparency, with concerted efforts from consumers and policy makers. In the 2022 Fashion Accountability Report, out of the companies that Remake evaluated, 53% of them failed to publish full Tier 1 supplier lists. It is crucial that we continue to demand companies to make transparency a priority and enact meaningful changes.

LIVING WAGES IS A CLIMATE SOLUTION

As the fashion industry makes critical shifts to fight climate change, we must also consider the human and social impacts of such changes, such as potential job losses and role reallocation. So far, zero companies (out of the 58 evaluated) demonstrated that they place the well-being of their employees and workers along with their value chains as part of their business model transition plans.

During the pandemic, workers within the supply chains were affected by the decisions and inaction from those at the top. During times of crisis, garment workers and factories bear the brunt of the economic and social consequences. Therefore, it is imperative that brands own up to their responsibilities towards the people as well as the environment during these periods of transition.

Living wages is a climate solution. According to the reverse rebound effect, paying garment workers living wages will result in an immediate reduction of carbon emissions.

Living wages is a climate solution. According to the reverse rebound effect, paying garment workers living wages will result in an immediate reduction of carbon emissions. Paying fair wages and making working conditions more humane will help to slow down fast fashion and prevent production from spinning out of control.

Time is of the essence in the race against climate change. With their sights set on ambitious carbon reduction targets, big brands also have a part in ensuring a just transition for people in their supply chains. Climate change is more than just an environmental issue; it is also a human rights issue. As clothing companies plan for their next big steps, they must commit to placing people at the center of fashion’s climate action so no one is left behind.

Cecilia Huang is a writer and non-profit professional based in Vancouver, Canada. When she is not learning or creating, she can be found crafting tea lattes and exploring her west (best) coast backyard.