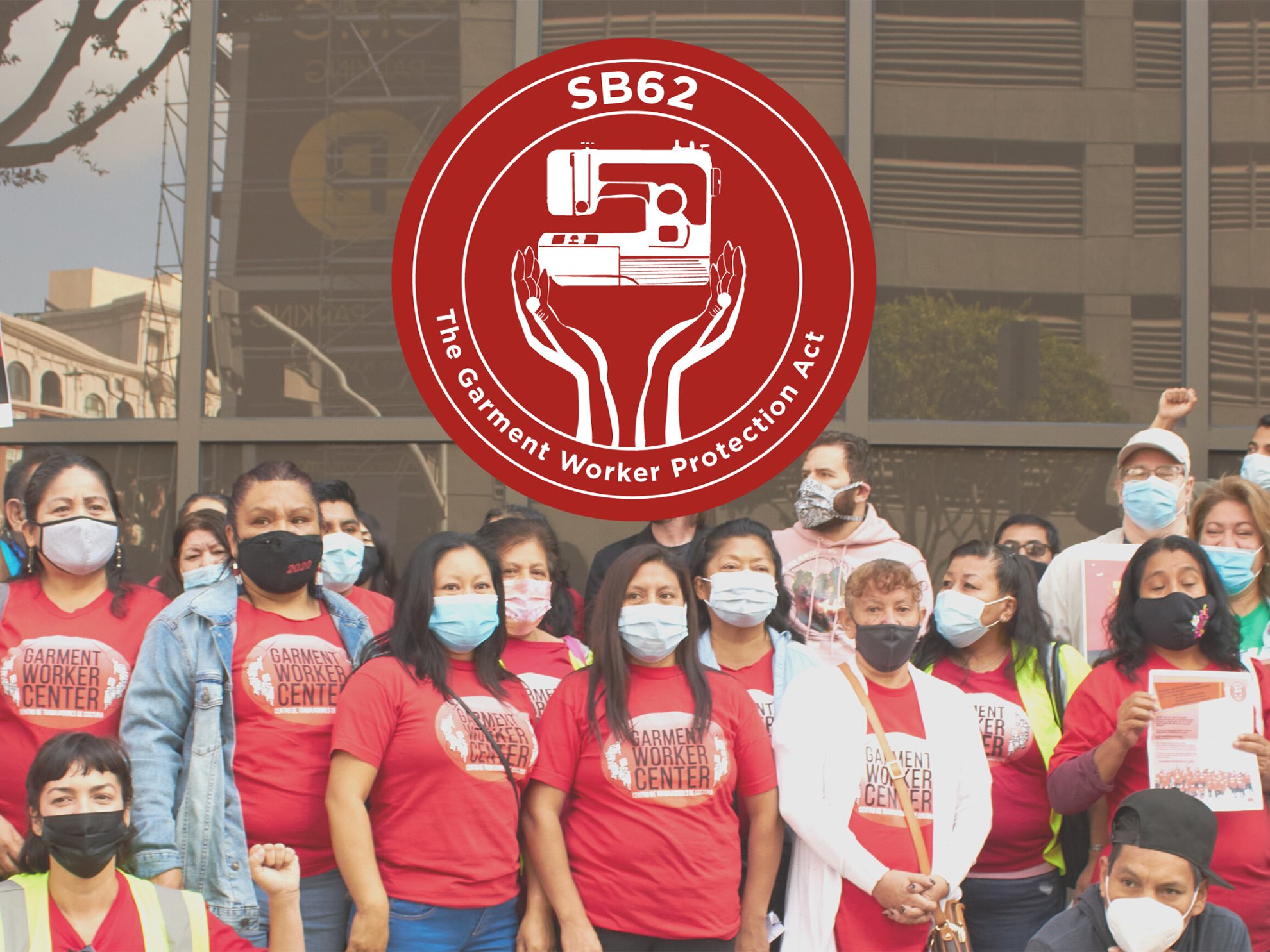 What is the Garment Worker Protection Act?

The Garment Worker Protection Act (Senate Bill 62) is a landmark California law passed by Governor Gavin Newsom in September 2021 after years of grassroots campaigning that addresses the root causes of systemic wage theft in apparel manufacturing by eliminating the piece rate system of pay and introducing new liability on fashion brands to incentivize them to stamp out workplace violations.

What does the Garment Worker Protection Act aim to accomplish?

The Garment Worker Protection Act aims to end wage theft and enforce better working conditions in California apparel manufacturing. Prior to SB62’s passage, the average garment worker wage in Los Angeles was $5.85 an hour and as little as $2.68, all while garment workers were sewing clothes for profitable brands like Forever 21, Ross Dress for Less, Urban Outfitters, and Fashion Nova. By closing loopholes in the law that allow brands and manufacturers to underpay workers without accountability, the bill will nearly triple garment workers’ hourly wages and also give them a path to justice when they experience wage theft.

What is joint liability on brands and retailers and why is it so important?

Joint liability means that brands and retailers share in the responsibility alongside their manufacturers to stop workplace violations and ensure legal wages. Many major fashion brands consistently underpay factories in California and research shows that the low prices paid by many brands is a root cause of poverty pay in garment factories globally. The U.S. Department of Labor has found that “the heart of the [wage theft] problem lies squarely with the pricing structure dictated by the retailers in this industry.” Joint liability on brands and retailers shifts the business model in fashion by incentivizing retailers to act as allies in tackling these workplace violations. It also levels the playing field for brands and manufacturers who are already paying fairly and that operate responsible supply chains.

SB62 is a landmark step towards ending systemic worker exploitation in fashion both by eliminating by-the-piece payment that’s used to underpay workers and by incentivizing brands through legal liability to tackle workplace violations. The Garment Worker Protection act marks the first time anywhere in the world that brands and retailers are clearly jointly and severally liable for wage theft in garment factories and subcontractors. This is the first step we’ve really seen in a piece of legislation that shifts the business model in fashion. The bill puts the onus on to ensure they are paying their suppliers enough to meet the minimum wage.

Are workers already getting paid more? Is the bill working yet?

As of January 1,  2022, all California garment factories are now required to pay the minimum wage instead of the piece rate. Any worker can now file a wage theft claim if they continue to be underpaid, and the brand and retailer can be jointly liable if they underpaid their factories. It’s important to note that laws take time to implement and changes won’t happen overnight. The first phase of the bill is educating factories, brands and garment workers about the change in law and the new rules about wages and brand liability.

Will the Garment Worker Protection Act benefit Made in the USA and Made in LA clothing?

The Garment Worker Protection Act will help protect the integrity of the Made in USA and Made in LA brands by ensuring products made in the United States are in fact ethically made. (Source: Garment Worker Center). What’s more, businesses can now produce in the United States without fear of reputation damage and responsible business can operate here without being undercut by unscrupulous competitors.

No. Labor is a very small percentage of the retail cost of a garment, typically as small as 2% of the retail price. The cost of labor can rise without having a substantial impact on the price to consumers. For example, on average, factories in California receive 73% of what they should from brands and retailers to meet the minimum wage. So, if a brand and retailer pays a factory $2 for a garment; they’d now pay $3.46 to help the factory comply with the minimum wage. Companies can choose different ways of absorbing increased costs. Some pass them on to consumers, and others accept a lower rate of profit.

Will brands leave California if they’re liable for wage theft?

There are many reasons why companies source in California, namely speed to market and skilled labor. It is a hub for companies that sell sustainable and high quality clothing. The Garment Worker Protection Act finally creates a floor for businesses in California that follow the law and pay fairly to compete. There are also many reasons that companies are changing where they source right now, including pandemic-related supply chain disruptions in Asia and investments in onshoring and nearshoring across the U.S. and in Mexico and Central America. The Garment Worker Protection simply enforces the minimum wage for garment workers in California. Despite arguments to the contrary, a large body of research shows that raising worker pay in low wage industries does not have a large impact on employment. It also does not lead to substantial increases in the cost of goods. What’s more, the Garment Worker Protection Act only raises costs or changes compliance for companies that were underpaying workers before the bill’s passage. The bill’s passage will deter certain unethical companies who rely on poverty pay from operating in the state; or these companies can choose to abide by the law and pay the minimum wage.

Which brands that source in California use sweatshops and underpay workers?

Is the Garment Worker Protection Act only applicable to California?

Will the Garment Worker Protection Act be implemented elsewhere?

That’s the plan. The Garment Worker Protection Act (SB62) has set an important precedent that brands are jointly liable for the pay and wages workers receive in contract factories. The coalition behind the bill hopes to implement Sb62 principles in other states or nationwide. There are also international efforts in Asia to use the principle of joint employer liability to hold brands responsible for wage theft.

More than 160 brands, retailers, manufacturers and other companies supported the Garment Worker Protection Act, including Saitex, Reformation, We Are HAH, Reformation, All for Ramon, Mara Hoffman, Eileen Fisher, and many others more. A full list of endorsers can be found here.