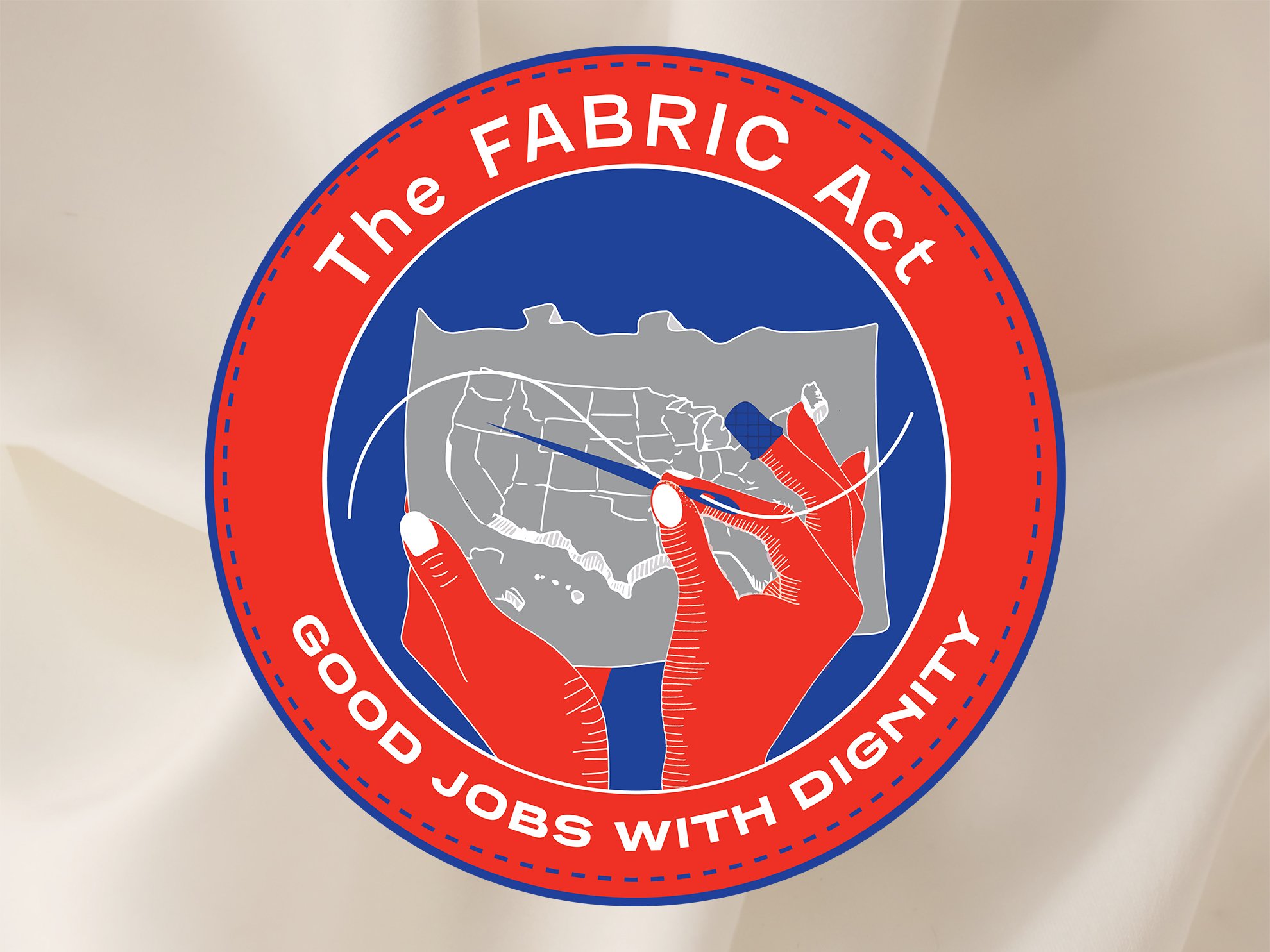 What is the FABRIC Act and when was it introduced?

The FABRIC Act is authored by Senator Kirsten Gillibrand (D-NY) in close collaboration with garment worker organizations in the United States, namely the California Garment Worker Center, Remake, Workers United, and Bet Tzedek Legal Services. The FABRIC Act’s labor rights dimensions draw on California’s Garment Worker Protection Act, which aimed to end pervasive wage theft in the state’s garment factories and passed in 2021. The FABRIC Act was introduced in the Senate by Senator Kirsten Gillibrand (D-NY) in May of 2022 as Senate Bill 4213 (access it here) and referred to the Senate Finance Committee for study. The identical bill was introduced in the House of Representatives on July 21 as H.R. 8473 by Carolyn Maloney (D-NY).

Why is the FABRIC Act necessary?

There are 95,000 garment workers in the United States, and they experience the second-highest rates of wage theft of any group of workers. There are also thousands of responsible apparel factories and fashion brands based in the U.S. who deserve proper investments to thrive, including funding for worker training and new machinery. Raising garment worker pay and supporting domestic production directly improves the lives of garment workers, who are mostly women, and the lives of their families and communities. Equally, it creates a level playing field for responsible employers. Fair-paying domestic manufacturing jobs are key to a robust national economy and a strong middle class.

Who has already Endorsed the FABRIC Act?

As of August 5, 2022, the FABRIC Act has over 130 official Endorsers, including more than 60 brands and manufacturers like Hope for Flowers by Tracy Reese, Reformation, Everlane, Outerknown, thredUP, and Saitex; organized labor like AFL-CIO, Unite Here, Garment Worker Center and Workers United; civil society organizations like New York Fashion Workforce Development Coalition (NYFWDC), Remake, Fashion Revolution, and Center for the Advancement of Garment Making; universities like Pratt Institute Fashion Design and California College of the Arts; and fashion media. For a complete list of Endorsers, click here.

Is this a Democratic or Republican bill?

How can people outside of the United States help?

Fashion-related individuals, companies and organizations based outside of the United States and regardless of where they produce clothing are encouraged to endorse and support The Fabric Act. Please post your support on social media using the hashtag #TheFabricAct. You can find premade social media posts and a simple form to officially Endorse the bill at the campaign website, TheFabricAct.org.

How can I help get the FABRIC Act passed?

Head to TheFabricAct.org for ways to Take Action. The first step is to pick up more support in both Chambers of Congress. To accomplish this, we are asking those based in the US 1) call your US Senator or House Rep and ask them to Cosponsor the bill (instructions and phone numbers are on TheFabricAct.org website) and regardless of where you are based 2) share your support on social media with the hashtag #PassFABRICAct.

How can I endorse the bill?

The FABRIC Act is currently gathering official Endorsements from companies, organizations, schools, and organized labor. To find out more or to officially Endorse the bill, visit TheFabricAct.org.

Why is it important for Senators and House Representatives to sign on as CoSponsors as a first step?

Educating lawmakers on the FABRIC Act and why it matters, and then asking Senators and House Representatives to Cosponsor the FABRIC Act, is absolutely critical to moving the bill forward. A Cosponsor is a Senator or Representative who officially adds his or her name as a supporter of a bill. The more Cosponsors a bill picks up, the more likely a bill is to advance out of Committee and onto a vote. It’s particularly important for the FABRIC Act to pick up Cosponsors in the Senate Finance Committee, as this is the committee where the bill was referred in the Senate after introduction.

Which Senators’ and House REpRESENTATIVES support should we focus on?

Getting support of Senators who are 1) members of the Senate Finance Committee, where the bill was introduced, is important as is 2) Senators and House Representatives who live in states where there are large garment production hubs, like New York, California, North and South Carolina, Texas, and Michigan.

What if my Senator OR HOUSE REP is already a CoSponsor? HoW DO I TAKE ACTION?

As of August 2022, the FABRIC Act is Cosponsored by Sen. Cory Booker (D-NY), Sen. Elizabeth Warren (D-MA), Sen. Bernie Sanders (I-VT), and Sen. Alex Padilla (D-CA). If you’re located in one of these States, call your other US Senator and ask them to Cosponsor. All states have two Senators.I n the House, in addition to introduction by Carolyn Maloney (D-NY), the bill is Cosponsored by Deborah Dingell (D-MI), Deborah Ross (D-NC), Andrew Carson (D-IN), Jerrold Nadler (D-NY), Ro Khanna (D-CA), Eleanor Holmes Norton (D-DC), and Stephen Lynch (D-MA). If your House Rep has already Cosponsored, call your Senator.

What is the timeline of the bill? What will it take to get it passed?

Currently, the FABRIC Act is in the Senate Finance Committee for study and in the House Ways and Means and Education and Labor Committees for study. To get the bill out committee and to a vote, the first step is picking up as many Cosponsors as possible, from both sides of the aisle and in both the House and the Senate. That said, not all or even most proposed bills move out of Committee, which is why it’s so important to educate lawmakers about the FABRIC Act and spread the word about the bill to potential supporters to build momentum. Moving legislation through Congress can sometimes be a time-intensive process, but gaining bipartisan support can move the process along faster.

How does the FABRIC Act differ from other fashion-related bills, like the NY Fashion Act or the California Garment Worker Protection Act?

The FABRIC Act is unique in a few ways. It provides substantial funding for workforce development, training, and new machinery to American garment producers and nonprofits in the form of a $40 million grant program. It establishes for the first time a federal registry of garment factories, which will make it easier for companies to locate reputable manufactures and perform due diligence on their supply chains and for the government to root out bad actors. It also amends the Fair Labor Standards Act (the federal law establishing minimum wage, overtime, and child labor rules in the United States) to clearly prohibit piece rate pay in garment manufacturing until the minimum wage is met and holds brands and retailers jointly liable when they are implicated in violations of the FLSA, such as wage theft or forced overtime.

That said, the fashion industry needs a suite of policy solutions to tackle its various challenges, and the FABRIC Act can work as a complement to other labor and environmental bills.

Does the bill include international elements or protect garment workers overseas?

The FABRIC Act protects American garment workers by amending the Fair Labor Standards Act, which only applies to workers within the United States, and provides funding and incentives for companies based in the United States. That said, US policy and legislation has global influence, and the introduction of this bill will influence policy and legal practice in other nations. The fashion industry needs a suite of policy solutions to tackle its various challenges, and the FABRIC Act can work as a complement to other labor and environmental bills.

Why promote American manufacturing when fashion is global?

Because the United States often sets the tone for policy globally, the FABRIC Act is an important stepping stone in passing a suite of legislation that includes protections for international workers and for influencing policies. The FABRIC Act does not preclude important work on international supply chain legislation and policy that protects workers and incentivizes responsible production globally. In fact, several members of the coalition supporting the FABRIC Act are already developing legislation that addresses the same issues on a global scale.

Piece rate incentives garment workers to be more productive. Does the bill abolish it outright?

Piece rate pay, by which garment workers are paid by the number of pieces they sew instead of by the hour, is prohibited under the FABRIC Act only up until the legal minimum wage is met. Factories may continue to use piece rate as an incentive-based bonus on top of the minimum wage. This amendment to the law is necessary to protect garment workers and stop unscrupulous manufacturers from using the piece-rate system to commit wage theft by paying subminimum wage, as is all-too-common throughout fashion supply chains.

How will the FABRIC Act address exploitation in the fashion industry and raise garment worker pay?

The FABRIC Act establishes strong rules for fair pay in garment manufacturing by prohibiting the piece rate pay system until the legal minimum wage is met and by holding brands jointly liable for any wage and hours violations or other violations of the Fair Labor Standards Act. It also establishes a federal garment factory registry. Under the Fair Labor Standards Act, if a garment worker experiences wage theft or other wage and hour violations, a worker can bring a claim before the Wage and Hours Division to seek repayment. However, the aim of the law is that by increasing liability along the supply chain, brands will be incentivized to operate as allies with their factories in ensuring garment workers are treated properly and paid fairly.

This three-pronged approach of defining minimum wage structures, increasing accountability all along the supply chain, and promoting transparency is key in ending exploitation in fashion.

Does the bill offer protections for immigrant workers?

Immigrants have always been the backbone of the American garment industry. Today, workers born outside the United States make up 42% of the domestic garment industry. The FABRIC Act serves immigrant workers by improving workplace protection and ensuring fair pay for this heavily immigrant-powered industry. What’s more, if passed, workers will have additional wage and hours protections at the federal level and regardless of status.

Who can apply for the $40 million grant program money? What does it cover?

Any garment manufacturer incorporated in and based in the United States, or any nonprofit engaged in activities such as workforce development for the US garment industry, is eligible for the Domestic Garment Manufacturing Support Program. Moneys can be used for investments in training and workforce development, the acquisition of relevant tools and equipment, capital improvements, health and safety improvements, and efforts to assist in educating employees about rights under the FABRIC Act and other relevant Federal, State, or local laws.