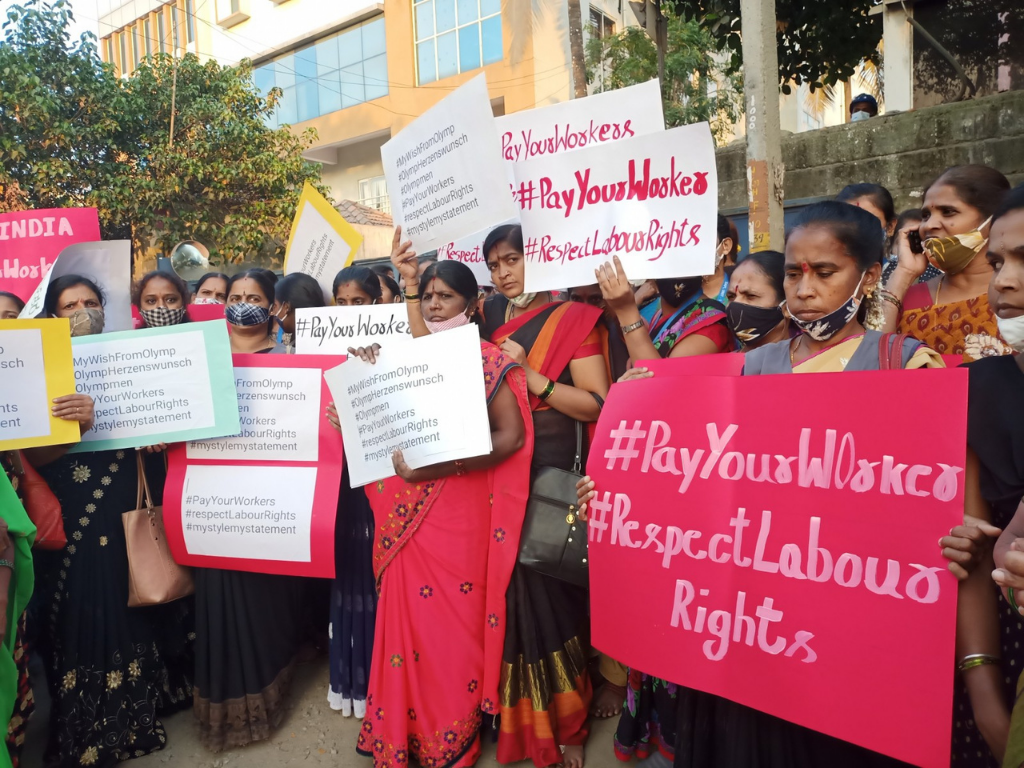 What is the #WorstWageTheft campaign?

The #WorstWageTheft campaign aims to hold brands accountable for massive wage theft occurring in their garment factories in Karnataka, India, which is one of the world’s largest garment producing regions. More than 400,000 garment makers are employed in Karnataka making clothes for the world’s big brands, including H&M, American Eagle Outfitters, Zara, Abercrombie & Fitch, and many more. In April 2020, a minimum wage increase went into effect in Karnataka. Factory owners refused to pay, leading to the worst wage theft in fashion history, according to the Worker Rights Consortium. Workers report that the impact of not receiving this increase was devastating, including reduced access to food staples, lost housing, and lost schooling for their children.

As of March of 2022, a majority of the largest factory groups in Karnataka had reversed their decision and agreed to pay workers the minimum wage and all owed back pay amounting to more than $28 million and applying to nearly 200,000 workers.

What brands are responsible for the wage theft in Karnataka, India?

Dozens of the world’s biggest brands produce in Karnataka, including H&M, American Eagle Outfitters, Zara, Gap, adidas, Abercrombie & Fitch, Nike, ASOS, Uniqlo, Walmart, and many more. Here is a complete list. Under brands’ own codes of conduct, garment factories are required to abide by local wage laws, including meeting the new minimum wage, which is why the campaign demands that brands  ensure Indian suppliers are both paying the minimum wage and back wages.

Why focus on H&M, American Eagle, Abercrombie & Fitch, and Zara?

Remake and the PayUp Fashion coalition chose to focus on these four brands primarily because H&M, Zara and Abercrombie & Fitch produce in the largest factory group in Karnataka, Shahi Exports, which employs more than 80,000 workers. American Eagle produces in another large factory group, Texport Syndicate, that employs more than 8,000 workers. What’s more, these four companies are among the biggest brands in the world and often position themselves as socially responsible, so ensuring their garment makers earn minimum wage is the bare minimum they can do.

What are the demands of the #WorstWageTheft campaign?

The demands of the campaign are for brands to ensure that their supplier factories in Karnataka, India, are paying the new legally mandated wage and that the suppliers pay workers back wages accrued since April 2020 due to the non-payment of the minimum wage increase. In addition, we are urging brands to pay prices to their supplier factories that are at least high enough to meet the minimum wage. The Worker Rights Consortium has been monitoring which factories are in compliance with paying arrears — and which are not — and has identified the major buyers at the largest factories in Karnataka.

What is wage theft and why does it matter?

Wage theft is when workers are denied their legally owed wages. It takes many forms, from workers being denied overtime pay to being cheated out of severance pay if they’re laid off. In Karnataka, wage theft of over $58 million occurred when a minimum wage increase went into effect in the state in April 2020, but nearly all factories refused until February 2022 to give workers their rightful wage increase. Garment workers globally face massive wage theft, including more than $11 billion in the first year of the pandemic. In terms of why it matters, these wages were rightfully earned by garment workers. Because most garment workers earn low, and even poverty wages, wage theft often means the difference between going hungry and buying nutritious food and means the ability to meet a basic standard of living, such as paying rent and school fees for their children.