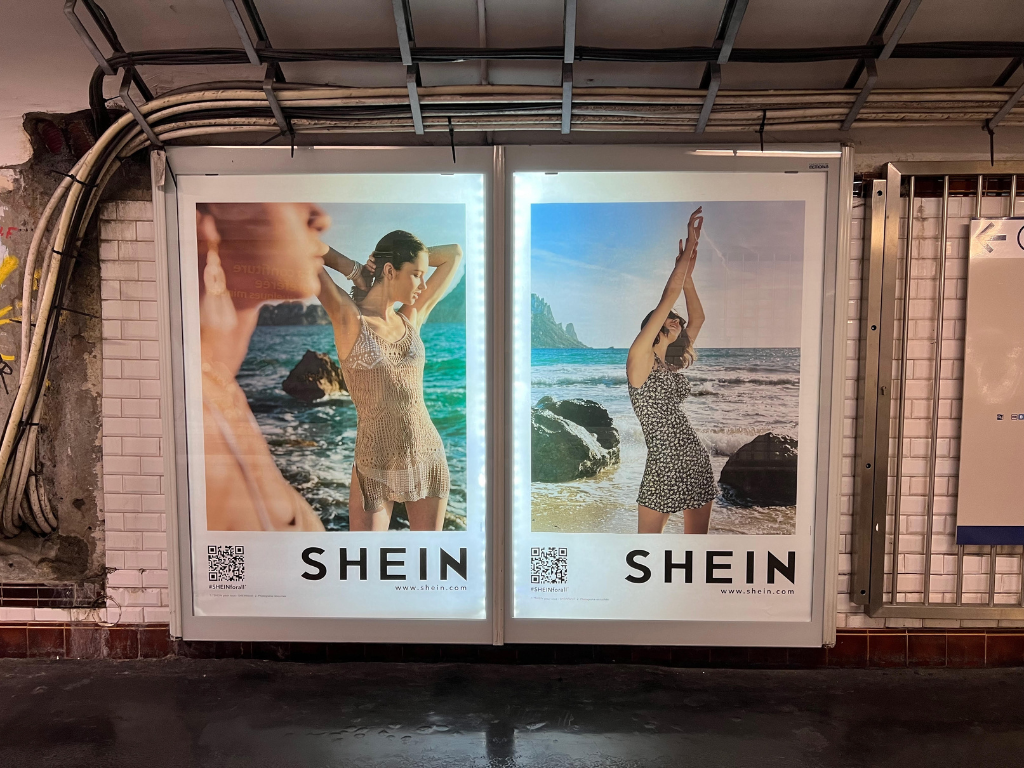 Recently, you may have stumbled upon a Shein scandal making its way through TikTok: shoppers finding “need your help” written on the tags sewn into their Shein garments. It was jarring for many consumers of Shein and those that viewed the TikTok video, prompting many to post comments urging Shein and the fashion industry to take action. News like this instantly jogs one’s memory of mistreated workers desperately seeking help by attaching messages to finished Zara products in 2017. However, the full context behind the Shein “need your help” message suggests that it is more likely to be the result of poorly worded copywriting than a coded cry for help. The sentence on the tag reads: “Do not dry clean due to water saving technology, need your help washing with the soft detergent the first time…”

Another widely circulated TikTok video, with the intention to remind people of labor rights abuse in fast fashion, shows numerous instances of messages asking for help alongside packaging images of Shein and Romwe (they belong to the same parent company). Shein clarified on TikTok that it has nothing to do with the claims of abuse mentioned in this viral post. The company’s statement  ends by saying the company has a strict Supplier Code of Conduct and it does not tolerate non-compliance such as regarding its policies against child labor and forced labor.

[Garment workers are working] 75 hours per week with no overtime premium while only having one day off each month.

Even though this story of Shein’s garment workers sewing coded messages into garment tags is false, the mistreatment of its workers is not. An investigation into Shein’s supply chain published by the Swiss watchdog Public Eye last year revealed that its Chinese workers are not only toiling 75-plus-hours a week with only one day off per month, but also earning piece-rate pay while working in hazardous locations. In reality, Shein suppliers’ practices violate local and international labor laws in numerous aspects. It seems like Shein’s compliance department has a lot of catching-up work to do.

Let’s Take a Look at The Report

Public Eye commissioned two labor rights researchers to track down Shein’s supply chain in Guangzhou, the provincial capital of the nation’s largest player in export, Guangdong province. Some of Shein’s suppliers are located in residential buildings, catching the researchers by surprise since international brands prefer to work with larger suppliers with better regulation. Noticing piles of clothing and fabric blocking walkways and the absence of emergency exits, one of the researchers commented, “I don’t want to think about what would happen if a fire broke out there.”

In the report, researchers found that a typical schedule for garment workers at one of the suppliers of Shein includes working from 8 a.m. to 12 p.m.,  from 1:30 p.m. to 5:45 p.m., and then from 7 p.m. to 10/10:30 p.m. They work 75 hours per week with no overtime premium while only having one day off each month. Seven other workers from different suppliers also reported working 11 hours a day, having one or two days off per month. These practices are not only against Shein’s Supplier Code of Conduct but also a direct violation of Chinese labor laws. According to Chinese labor laws, a work week is a maximum of 40 hours, with overtime being 36 hours maximum each month, and a worker is entitled to at least one day off each week. Unfortunately, these long working hours are not uncommon in the textile industry in China. Garment workers are mostly migrant workers from other less developed provinces, with the sole goal of coming to Guanggdong to make as much money as possible with their hard work. Across the world, migrants from less developed regions move across their countries or even beyond countries’ borders to work in garment factories hoping for better income. Yet they face widespread exploitation as their precarious positions are abused to maximize profits..

As told by one of the workers, they are paid by each piece of garment they make at this particular supplier. The piece rate here is “considerably” lower than in other places, along with its expectations for quality, which is not the main appeal of Shein. This has caused big fluctuations in workers’ wages. During a busy month, a worker can take home 10,000 yuan (1,500 dollars) but they could only earn a third of that amount during slower months. Interestingly, contrary to many assumptions, garment workers for Shein are not earning so little money below a living wage that they can barely support themselves. All ten workers interviewed by the researchers make “significantly” more than the local living wage 5,410 yuan calculated by Asia Floor Wage. However, that is a deeply flawed comparison since their wages come from them essentially working two jobs. Further investigations revealed more illegal labor practices: five workers from three suppliers reported working without contracts thus making them ineligible for social security benefits and putting them in a vulnerable position. Not only do the informal small suppliers not provide employment contracts, the researchers also found that suppliers with over 100 employees do not either. With the power it has over its suppliers, Shein is constantly driving down costs and moving simple tasks to other provinces for a cheaper labor force, further out of sight, leaving more complicated styles with the more experienced workforce in Guangdong.

After the Public Eye report came out at the end of 2021, media outlets such as BBC and Business of Fashion reported on labor law violations committed by suppliers of Shein. They received the following response from the company but no further updates:

“Upon learning of the report, we immediately requested a copy and when we receive and review the report, we will initiate an investigation. We have a strict supplier Code of Conduct which includes stringent health and safety policies and is in compliance with local laws. If non-compliance is identified we will take immediate action.”

The first half of 2021 saw the US fast fashion market grow by 15 percent but Shein grew almost 160 percent in sales in the same period.

So what steps has Shein has taken to address these illegal practices in its supply chain? At Remake, we believe backing up your claims with actions and evidence is crucial to make credible progress in sustainability. That’s why Shein only received five points out a of possible 150 in Remake 2021 Fashion Accountability Report. The five points Shein did earn were doled out in our criteria’s animal welfare category since Shein uses mostly fibers derived from fossil fuels. As a company valued at 100 billion dollars, more than the market capitalizations of H&M and Inditex (parent company of Zara) combined, Shein discloses next to nothing about its business practices and is woefully lagging behind standard industry CSR (corporate social responsibility) practices.

As our report states, “In 2021 SHEIN hired a Head of ESG and released its first Sustainability and Social Impact Report. Far from a sign that the company is progressing in the right direction, the report is full of unsubstantiated claims and goals, a lack of demonstrable progress, and red herrings that draw attention away from the company’s main areas of impact, which is worker exploitation, carbon emissions and waste.”

A June 2021 data by Earnest Research shows that Shein is the largest fast-fashion retailer in the United States, occupying 28 percent of its share. The first half of 2021 saw the US fast fashion market grow by 15 percent but Shein grew almost 160 percent in sales in the same period. As much as we would like to believe Gen Z consumers shop with their values, that is unfortunately not the reality here. Much has been written on the social media savvy Shein, especially on TikTok, and its ability to lure in consumers with the latest styles at the cheapest price. Overconsumption and drowning yourself in clothes is no longer limited to fashion fantasies on TV. The hashtag #Sheinhaul has over 5.9 billion views on TikTok, with consumers showcasing their Shein “hauls” worth hundreds of dollars. Shein’s unrelenting efficiency created a new category in fashion retail, ultra-fast fashion. Alarmingly, it just raised one billion dollars in April to further fuel its growth.

Shein’s ambiguousness is essential to its ultra-fast and ultra-cheap business model, shedding the costs for ensuring compliance, workers’ well-being, and more sustainable practices. Nothing unheard of in the world of international trade, yet, I would gladly have Shein prove me wrong. As someone who just set a time limit on Instagram today to address his unassailable habit of procrastination, I relate to being swept away by the potent algorithms and social media of our contemporary life. I am flawed. But I am also optimistic: we should hold fashion companies, like Shein, accountable for their business practices and demand more transparency from them. “Sunlight is the best disinfectant,” said Louis Brandeis, American lawyer and associate justice on the Supreme Court of the United States from 1916 to 1939. Consumer pressure has proven to have positive impacts on how brands conduct their business as seen with our achievements with initiatives like the #PayUp Campaign and The Fabric Act. Starting with fashion, a key industry in facilitating development across the global south, we can push for better practices in international trade across the board to expect more concrete action in sustainability from companies so the promises of globalization can finally be redeemed to better serve the interests of workers. We need to ask ourselves: do we want more disposable fossil-fuel based fabric garments sewn by workers working day and night; or do we want quality and enduring garments sewn by workers who make enough money to support their families so they can clock off at dusk?

Joining Remake in 2017, Yimin Deng-Wen holds degrees in fashion design and international development to explore his path of addressing sustainability in fashion and beyond. He is now based in Paris.