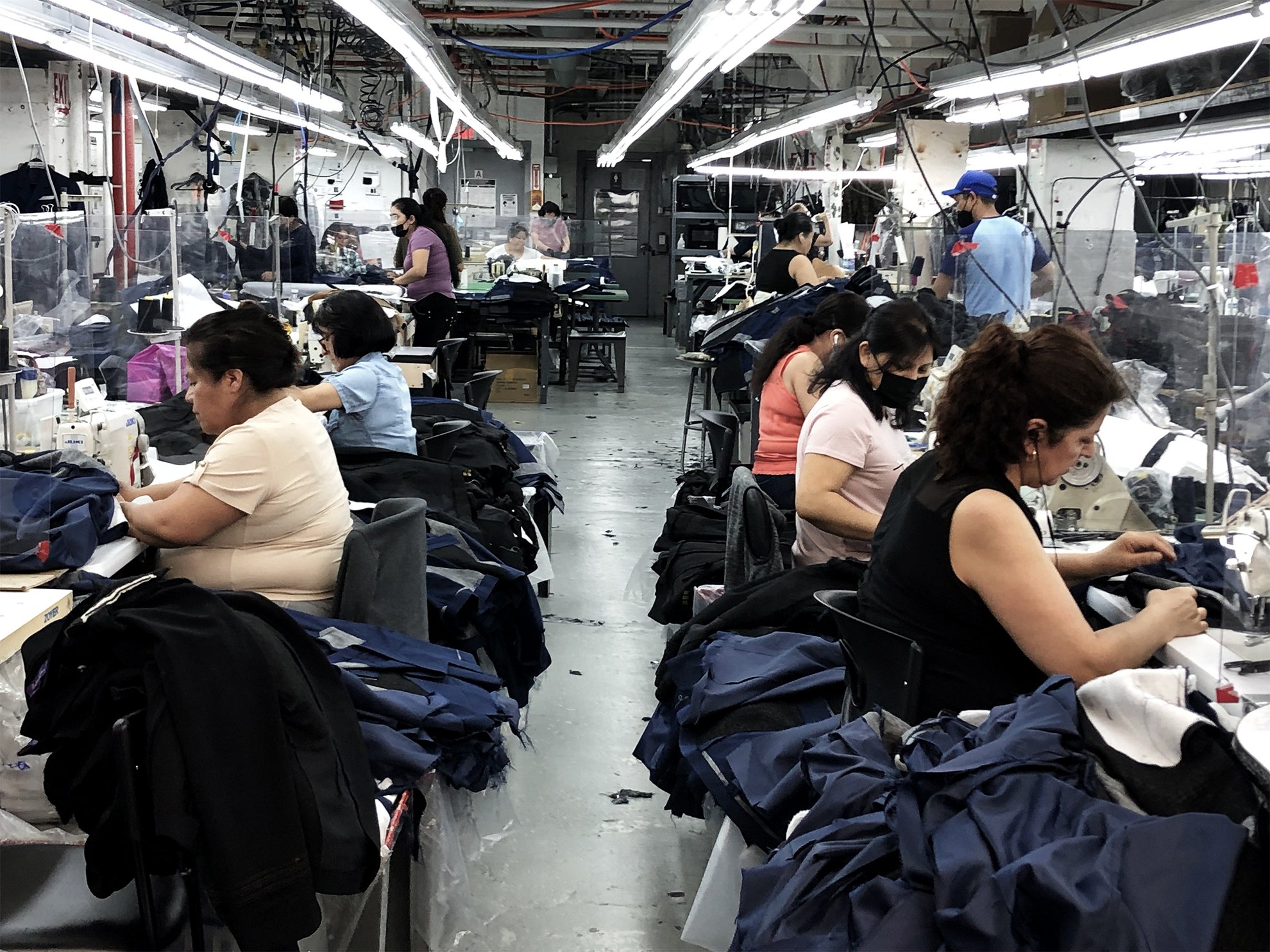 Every year, Remake launches #NoNewClothes, a campaign that asks consumers to stop buying new clothing for three months. From June 1 to September 1, many of us within the Remake community and beyond take a 90-day pause from first-hand shopping and instead use that time to reflect on our relationship with the fashion industry and check in with our own consumption habits. It’s often within this period that questions arise of how shopping boycotts impact garment workers, questions like: “Does buying less hurt garment workers because the women who make our clothes could lose their jobs?” and “Aren’t sweatshop jobs better than no jobs at all?”

Of course, such questions make sense — they are born from the logic that fewer purchases will equal less demand and the trickle-down effect of that will be that garment makers are pushed further below the poverty line. But still, we argue that the answer — while it is complicated — is no.

“The focus should be on better wages and worker empowerment across fashion supply chains.”

Rather, the framework within which such questions are conjured is tied to a mindset that is part of the problem. It is a mindset that accepts the current system, one that ties millions of women around the world to a cycle of exploitation and abuse. If we want to change the system, we need to start changing the questions.

“The fashion industry grows by about 3% per year,  that growth corresponds to job growth as well,” says Elizabeth L. Cline, Remake’s Director of Advocacy and Policy. “That growth has not been hindered in any way by the astronomical rise of secondhand shopping.” (In June 2021, ThredUp published a report that estimated the secondhand market will be twice the size of fast fashion by 2030 and worth approximately $40 billion.)

Rather than decreasing or replacing the demand for new goods, the growing secondhand clothing market has “become another type of consumption,” Cline argues. “From a jobs perspective, this is arguably a good thing, as the secondhand industry is also very labor-intensive and creates a lot of jobs.” Vitally, she adds: “The bigger concern across both the secondhand and fast fashion industries is not the number of jobs, but the low quality of the jobs.”

Simply put, Cline states that “the focus should be on better wages and worker empowerment across fashion supply chains.”

This point is echoed by Nazma Akter, founder of Dhaka-based labor rights NGO, AWAJ. “The fashion industry creates jobs, there is no doubt. But these jobs should be dignified. They should be decent.”

Currently, garment worker jobs (which are predominantly in the Global South) are the opposite of decent. Akter continues to list just a handful of the violent circumstances women battle on a daily basis while working in factories in Bangladesh: “Low wages. Long hours. No social protection or pension scheme or job security. They experience sexual harassment and abuse. They are separated from their babies. Their children’s education [suffers].”

“Retailers are willing to exploit this cheap labor…This enables the fast fashion industry to exist in the capacity that it does.”

Death is an extreme but all-too-real consequence of such an exploitative industry. The Rana Plaza factory collapse in Dhaka, Bangladesh in 2013 killed 1,134 workers — it is considered the deadliest garment factory disaster in history and it could have been completely avoided had the warning signs been acknowledged. According to reports, structural faults were reported but ultimately ignored due to the pressure to fulfill orders placed by fast fashion brands. And while Rana Plaza is the most infamous example, there are countless, frequent stories of garment workers being killed or injured as a direct result of their working environment.

In ‘The Impact of Fast Fashion on Women’ (2020), Andrea Chang details sweatshop workplaces, windowless rooms where the women working there are poisoned by fumes, minimal regulation of safety standards, and extremely low wages. “Retailers are willing to exploit this cheap labor, and there is a vast supplier network that mediates between these retailers and hundreds of thousands of garment factories. This enables the fast fashion industry to exist in the capacity that it does.”

Two years on and the effects of the order cancelations are still unfolding. Remake’s #PayUp campaign helped to reclaim $22 billion of the stolen wages, working in partnership with NGOs, labor rights groups, and fashion activists from around the world to demand that brands pay what they owe. Such outrage created a spike in awareness in the Global North, shedding light on the supply chain injustices that are so often (and intentionally) hidden from consumer view. Here was a black-and-white example of how brands put money before human lives and how they would only pivot to justice when consumers worked as a community and threatened brand reputations, customer base, and revenue.

The fight for garment worker justice is far from over.

Although awareness is growing and significant wins have been made over the last two years, the day-to-day experience for most garment workers isn’t improving.

“…machinery can take over the more dangerous jobs, and some of the women who make our clothes will have the opportunity to do more skilled work and hopefully earn more money.”

“In the current economic crisis, wages are decreasing,” says Ashila Dandeniya, founder of the Sri Lankan labor rights union Stand Up Movement Lanka. “All factory workers are very much afraid of this. They never know [if] their job is secure for the next months. The government is not focused on [supporting] garment factory workers,” she adds, explaining that they received zero fiscal help during the pandemic unlike other workers such as taxi drivers that received an allowance. “The main people that are [bringing in] dollars and foreign income [to the country] are the factory garment workers, but still, the government didn’t [give them] their attention.”

The increase in machine-automated jobs is also a real concern in regard to job security. They “are taking away women’s jobs,” says Akter, estimating that machines have already replaced around 20 percent of jobs once held by women in Bangladesh’s garment factories. Yet while the expansion of robots in the garment industry is inevitable, Remake founder Ayesha Barenblat explained in 2019 that this doesn’t have to equal joblessness. In an ideal situation, “machinery can take over the more dangerous jobs, and some of the women who make our clothes will have the opportunity to do more skilled work and hopefully earn more money.” Governments could also implement policies and tax incentives that would make this vision a viable (and affordable) option.

There’s also a compelling argument that paying garment workers living wages could help solve the climate crisis. Citing Roland Geyer’s The Business of Less: The Role of Companies and Businesses on a Planet in Peril, Cline outlines what she dubs “The Green Theory of Labor” in a recent Medium article. It’s not a theory easily condensible but the essence is that every dollar spent on paying people for their time and skills “is de facto a dollar not spent on something with an innate environmental impact.” It is a carbon-saving sustainable dollar because you are directly paying to sustain life within the fashion industry.

So, rather than asking “Does buying less hurt garment workers?” the question should be: “How do we hold brands accountable and ensure workers are paid a living wage?”

As the #PayUp campaign illustrated, putting pressure on brands can change their behavior. Your voice and where you spend your money matter. “Don’t just think about discounts,” says Akter. Buy from companies that are transparent and accountable, who share your values, and can provide the receipts — companies like Veja that publicly share the details of how much their garment workers earn, how many hours they work, and under what conditions.

Patagonia, Nudie Jeans, and Reformation have also all committed to paying living wages. (You can check the Remake Brand Directory for more information on specific brands.) These brands set a good example of how the fashion industry could, and should, operate as a whole, which is exactly what Remake and NGOs like AWAJ and Stand Up Movement Lanka are fighting for.

As Dandeniya evidenced earlier, governments also have a huge role to play in holding companies accountable and ensuring garment worker survival via monetary support. If passed, The Fabric Act would sign labor conditions, anti-wage theft, and anti-piecework pay into American law and set a monumental precedent, one with the potential to spark a domino effect that will lead governments around the world to protect the rights of clothing laborers in the garment industry. You can read more about the bill here.

Heather Snowden is a British fashion writer based in Berlin.