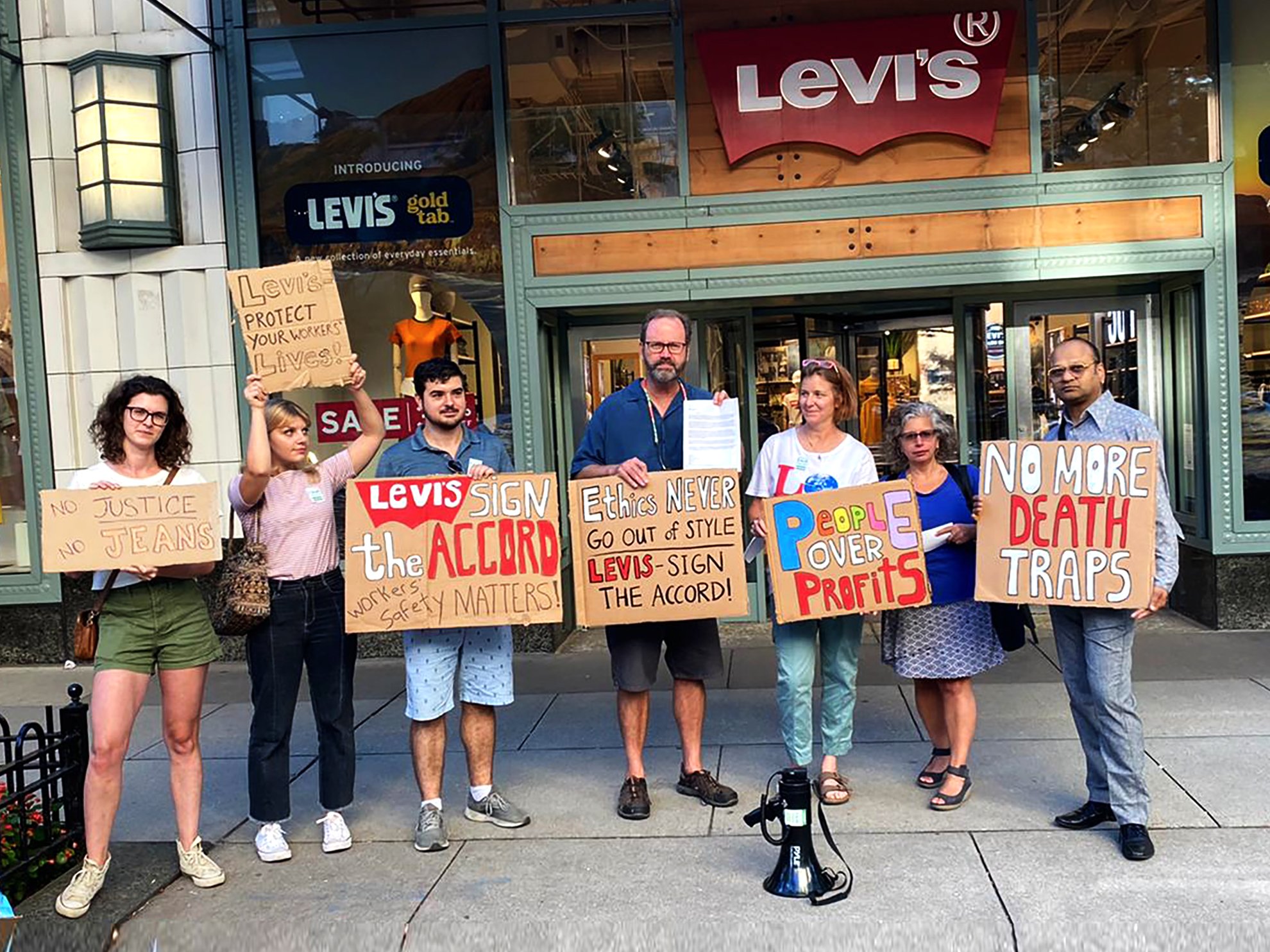 During the September 5 Week of Action, thousands of citizens joined garment workers and union leaders around the world, from Mumbai and Bangalore, Milan and London to San Francisco and New York, to call on Levi’s to sign the groundbreaking and life-saving International Accord on Health and Safety. Levi’s own health and safety program has failed to keep workers safe, as evidenced by the brand’s own Sustainability Report and by recent worker video testimony, where garment workers report they’re facing heat exhaustion, verbal abuse, and forced overtime while sewing clothes for the brand. Levi’s responded to campaigners by handing out this stock letter, which attempts to paint a picture that its own safety program is good enough. We’ve debunked the letter below.

In 1991, we were the first multinational company to introduce a comprehensive code of conduct, our Terms of Engagement, which prioritizes worker safety, including annual fire safety assessments.

For over thirty years, major brands including Levi’s have used voluntary codes of conduct and privately-funded social audits of their factories to “prove” that they are sourcing their products responsibly — and yet, these efforts have completely failed to keep workers safe, leaving garment workers vulnerable to horrific workplace accidents. In fact, both the Rana Plaza and Ali Enterprises factories–the sites of the two deadliest accidents in fashion history, where nearly 1400 lives were lost–were subject to recent audits prior to their collapse and incineration.

These factories also produced for major brands that had codes of conduct. While health and safety are a baseline demand to which all workers are entitled, Levi’s seems content to slowly make improvements in these areas, ignoring the urgency of the situation. According to Levi’s own Sustainability Report, health and safety violations remain in at least half of their Asian factories, a decade after these lethal accidents.

In Bangladesh, we have established a record of worker safety practices, including the establishment of a comprehensive program for building, electrical and fire safety that has served as the model for our international programs.

Bangladeshi factories do have a strong recent record of workplace safety, and much of that progress is due to the Accord on Fire and Building Safety, which has operated in Bangladesh since 2014, following the Rana Plaza disaster. Levi’s is a free-rider of the Accord program. In fact, the brand sources from 16 factories in Bangladesh that are covered by the Accord program, benefitting from this life-saving program without contributing to it.

In 2014, we began requiring all our suppliers in Bangladesh to undergo third-party electrical safety and building integrity assessments as a precondition of doing business with us.

Private third-party audits fail to keep workers safe and improve working conditions. Rana Plaza, where 1,132 people lost their lives, had been recently audited by private third-party inspectorates and deemed safe by so-called reputable auditing firms before collapsing. Private, for-profit audits do not protect workers because there are too many built-in incentives for the audit companies to look the other way and for factories to hide serious violations from both brands and auditors. What’s more, the results of for-profit audits are almost never shared with garment workers themselves. By contrast, under the International Accord, garment workers oversee the complaint mechanism and are centrally involved in the process of repairing and remediating factories until they are deemed healthy and safe.

Following a risk-based approach, we also conduct third-party assessments with direct suppliers operating in Cambodia and Pakistan, with processes in place to take corrective action wherever deemed necessary.

According to video testimony Remake has received from Levi’s workers in Pakistan, the brand is operating in factories where there is forced overtime, no breaks, heat exhaustion, verbal harassment, and a lack of clean bathroom facilities, cold water and medical treatment. Either these third-party assessments are not accurate or the brand is not acting on the information it’s finding. According to one female Levi’s worker in Bangladesh, “Our main problem is that workers do not have proper safety. Workers at the factory suffer from extreme heat but are denied treatment from the factory’s doctor. Our production manager does not allow us to seek medical treatment… Sometimes they beat us and often use abusive words towards us. When workers make even a tiny mistake, management punishes us immediately. Us workers are abused but never get justice.” 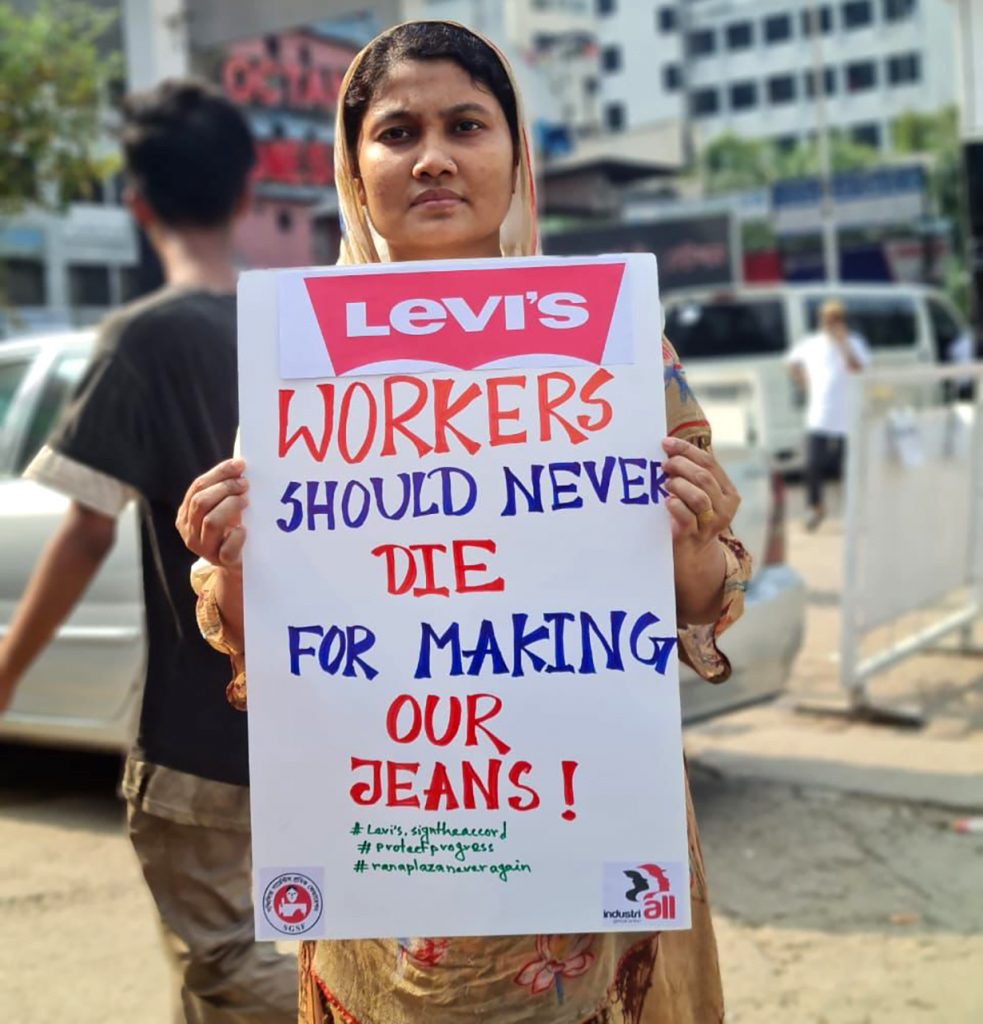 You can read more about our worker safety efforts in our most recent Sustainability Report.

(Link not working? You can also find email copy here.)