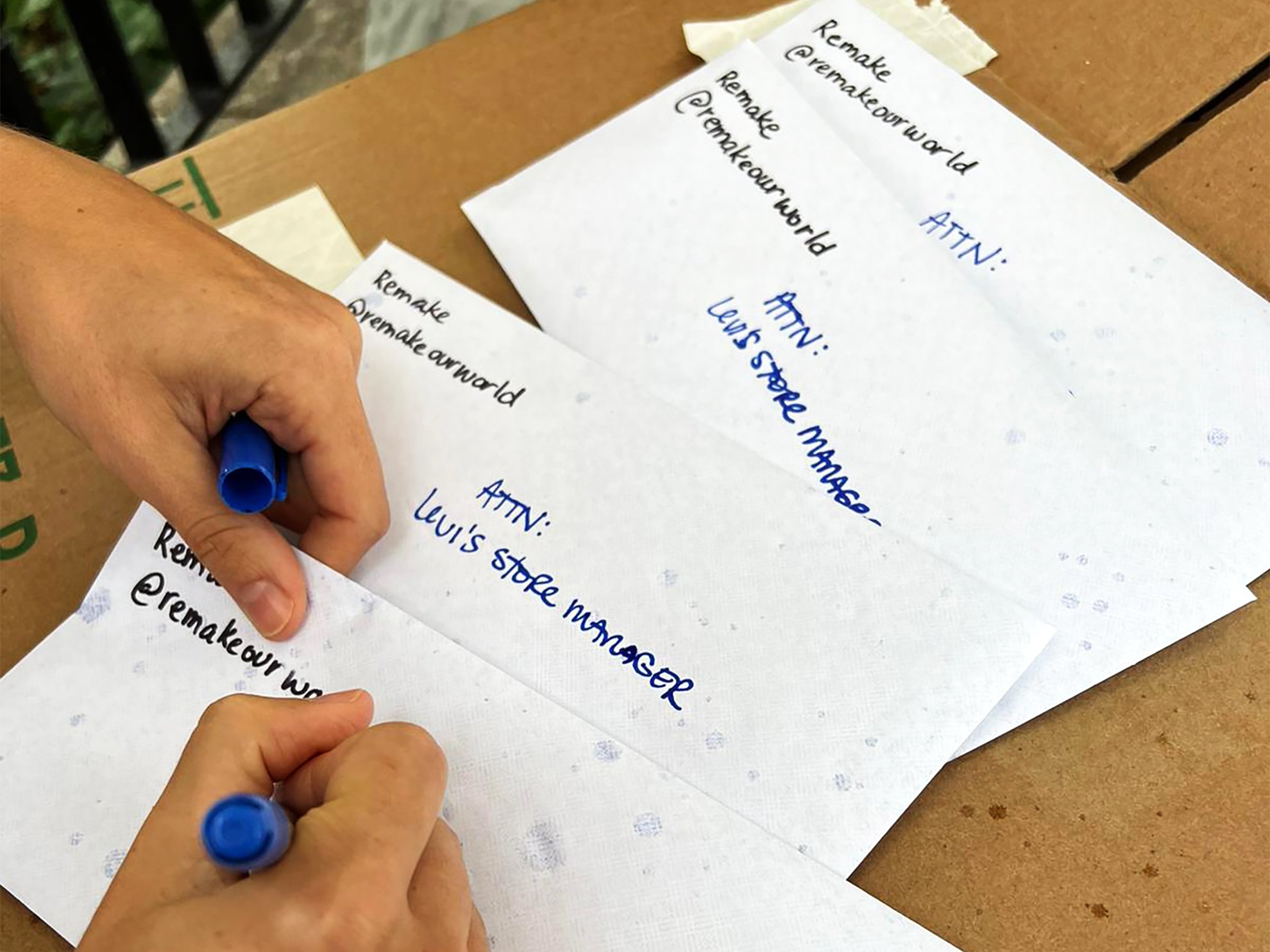 From October 17 to October 23, Remake led a second Week of Action campaigning for Levi’s to sign the International Accord for Health and Safety in the Textile and Garment Industry. This followed an impactful first Week of Action in September when demonstrations and letter deliveries were held at 18 Levi’s stores in seven countries: Bangladesh, India, USA, Canada, Italy, England and Pakistan. Online action during the week included 2,700+ emails being sent to Levi’s Executives and Board of Directors, and over 200,000 social media engagements with the Accord Levi’s campaign.

During this second Week of Action held in October, the ethical fashion community united once again — coming together locally, digitally and globally to express the urgent need for Levi’s to #SigntheAccord.

On Thursday, October 6th, the Remake community and our network of ambassadors stormed Twitter to urge Levi’s to sign the International Accord, during a stakeholder meeting.

The tweets featured “cashtags,” which act as stock tickers that investors could view during the quarterly investor call. Levi’s CEO Mort Buckley, the Vanguard Group, and BlackRock were among those targeted in the twitter campaign.

Hey, $LEVI investors! 👋Did you know your $ are supporting exploitation? @Levis workers in Bangladesh and Pakistan suffer daily with injuries, exhaustion and low pay.

Around the world, we call on Levi’s to #SignTheAccord to protect their workers. Do the right thing and join us! pic.twitter.com/YNyIWCGn8V

Alongside the Twitter storm, ambassadors and advocates continued to send emails to Levi’s Executives and Board of Directors. In the second week of action, an additional 1700+ emails were sent to directly Levi’s executives and over 200,00 people engaged via social media.

This campaign brought together people from across Remake’s international community. “Being a part of the Levi’s Week of Action was such an empowering experience. Standing alongside my fellow Remake team members and ambassadors, I was reminded I’m not alone in my anger and frustration, and desire for change in this industry,” said Tessa Beltrano, Remake’s Program Manager.

Remake ambassadors Shanon O’Hara and Erin Smith organized a protest and delivered a letter to a store manager at the Levi’s store at Sherway Gardens in Toronto.

“We held a brief protest in front of the shop, documented with a few photos and videos, and delivered a letter to the store manager who was open to hearing about the International Accord and the importance of Levi’s committing to health and safety provisions for its garment workers in Bangladesh and Pakistan,” O’Hara said.

Smith, who is a Remake Community Organizer, alongside being a global ambassador, emphasized that “it is so important that Levi’s sign the International Accord because a brand with that much power and leverage should be setting an example for other brands to follow.”

In collaboration with Extinction Rebellion, an international, non-partisan movement to persuade governments to act on the climate emergency, Remake demonstrated at Levi’s headquarters in San Francisco on October 18th.

After a second week of campaigning, one conclusion can be drawn: Levi’s is actively ignoring demands that it signs onto the International Accord, despite being a major producer of denim where the Accord operates.

“Remake’s presence at the Levi’s Time Square store was the perfect example of how collaborative and respectful protesting can be. We had a great conversation with the store manager, who was aware of the Accord. After our conversation, we peacefully raised attention on Levi’s absence from the Accord outside the store,” said Cochran.

It is almost an embarrassment that Levi’s has continued to ignore the outcries of the ethical fashion community, given that 170 major retailers have signed onto the Accord, including Adidas, American Eagle, ASOS, Bestseller, Boohoo, C&A, Esprit, H&M, Inditex (Zara), Mango, Marks & Spencer, Next, Primark, Puma, PVH (Calvin Klein, Tommy Hilfiger), and UNIQLO. Many of these companies are not necessarily the most “sustainable” or “ethical” — proving further that the International Accord is the bare minimum when it comes to ethics for fashion manufacturing.

Beltrano, who attended the New York protests, also weighed in on Levi’s complacency: “Through these demonstrations, we have somewhere to put our collective frustration and turn it into direct action, pushing for positive change — and we witness the impact in real time. Having now demonstrated in multiple cities, from D.C. to N.Y.C., demanding Levi’s sign the Accord, I’ve witnessed camaraderie and kindness from employees, curiosity and support from passers by, and the strengthening of our community and our movement in real time,” said Beltrano 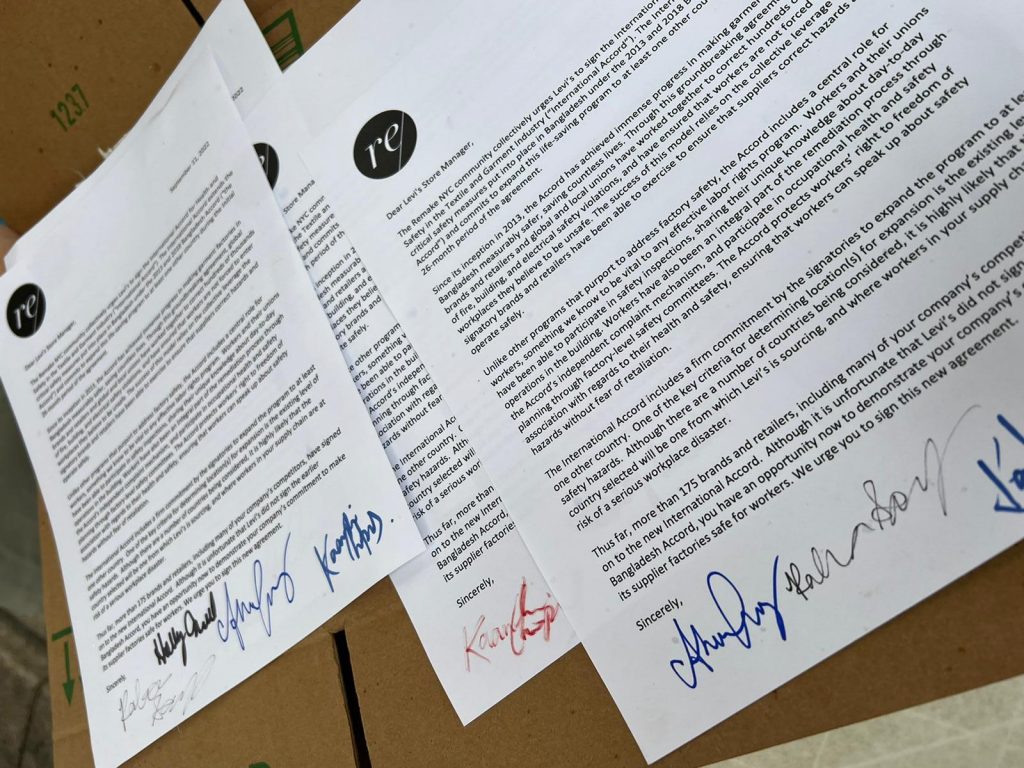 It is long overdue for Levi’s to sign the Accord. Garment makers working under Levi’s continue to suffer daily from injuries, heat exhaustion and low pay, according to worker testimony and the brand’s own Sustainability Report.

“Levi’s needs to sign this Accord to join the hundreds of other brands who are committed to ensure the people who make its products are treated with dignity and respect, and feel safe in their place of work,” O’Hara said.

More advocacy and action is still necessary. Here’s how you can help:

1) Deliver a letter to a Levi’s store. You can head to a Levi’s brick and mortar location, ask for a manager, and hand them a copy of this letter with your name signed at the bottom. Get the Letter.

2) Print out pocket-sized barcode tags and slip them into jean pockets in Levi’s stores. Get the Barcode.

3) Demand Levi’s sign the International Accord by sending an email to Levi’s Board Executives. Send an Email. (Link not working? You can also find pre-written email copy here.)

4) Publicly tag Levi’s on social media with any of the following sample tweets, or craft your own:

You are also encouraged to create and share your own content about the Accord. When sharing about supporting the Accord, it’s very important to tag @Levis and use the #SigntheAccord hashtag.

5) Organize a protest in your city! If you’re interested in taking this action, please reach out to info@remake.world for more information.